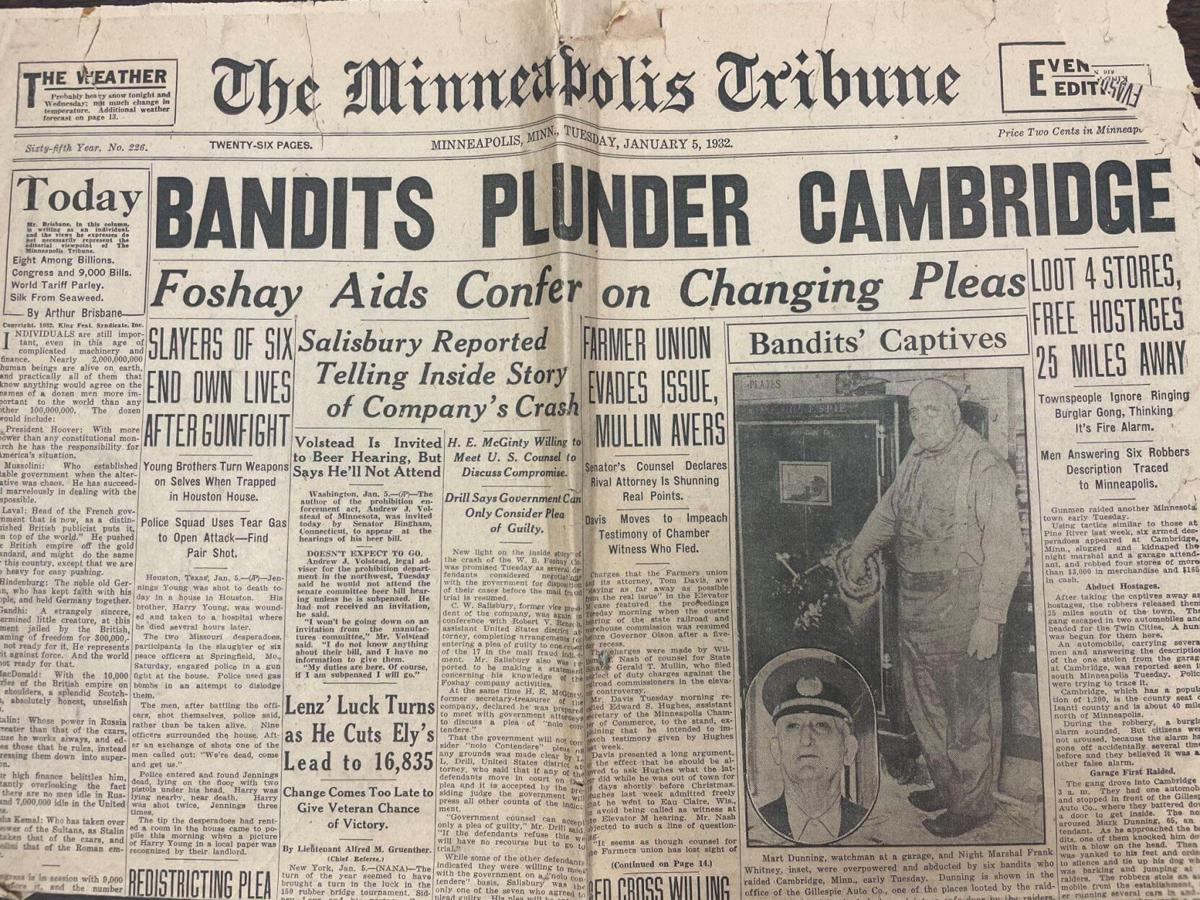 The exploits in Cambridge of the gangsters made the front page of The Minneapolis Tribune. 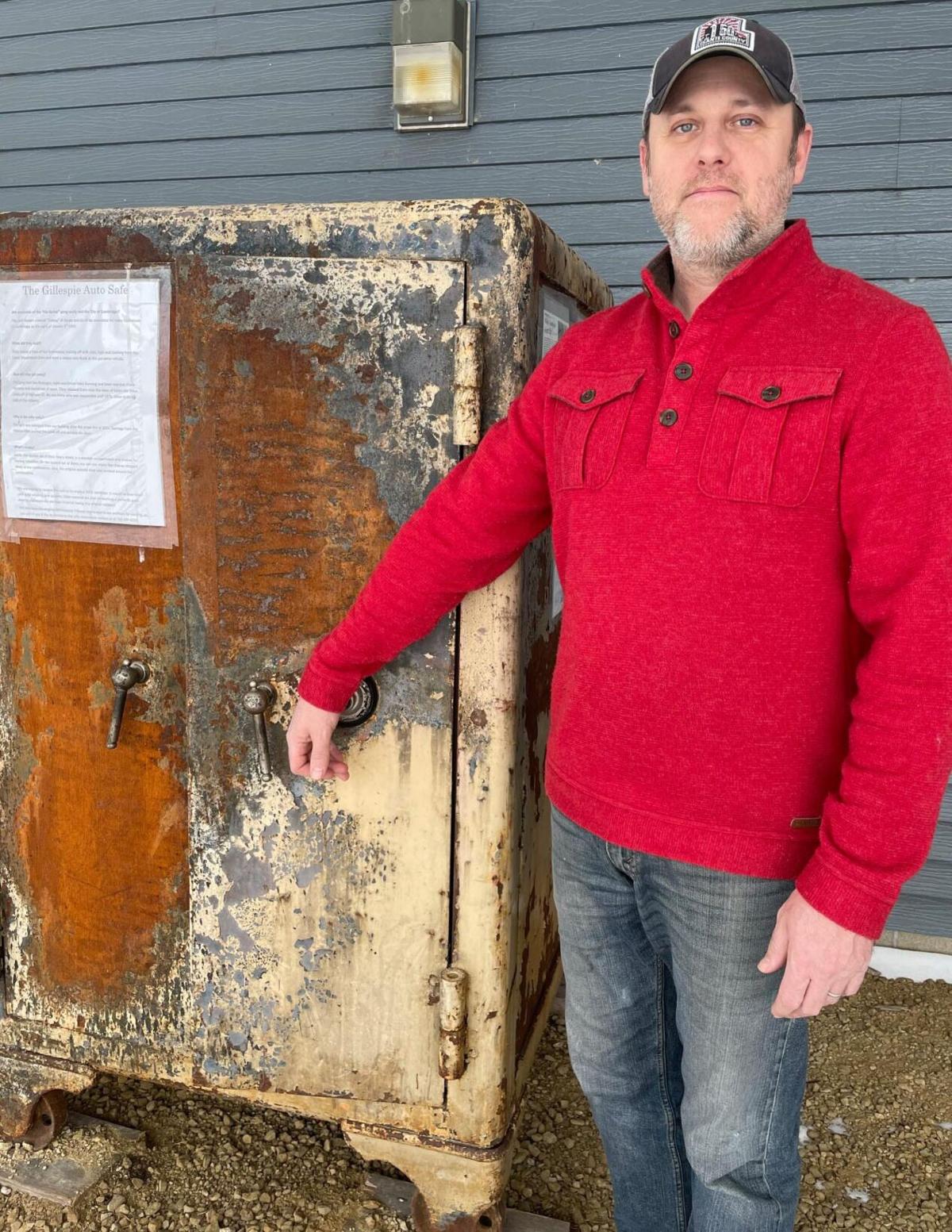 Isanti County Historical Society Executive Director Sam Klocksien shows the Gillespie Auto safe that is on display at ICHS. The safe received some cosmetic damage in 2011 during a fire at the ICHS building. 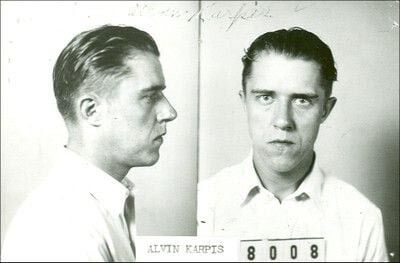 A 1930 mugshot of Al “Creepy” Karpis, who was the leader of the gang that went on a one-night crime spree in Cambridge, taking two hostages and stealing a getaway car in the process.

The exploits in Cambridge of the gangsters made the front page of The Minneapolis Tribune.

Isanti County Historical Society Executive Director Sam Klocksien shows the Gillespie Auto safe that is on display at ICHS. The safe received some cosmetic damage in 2011 during a fire at the ICHS building.

A 1930 mugshot of Al “Creepy” Karpis, who was the leader of the gang that went on a one-night crime spree in Cambridge, taking two hostages and stealing a getaway car in the process.

Eighty-nine years ago, on Tuesday, Jan. 5, 1932, Cambridge citizens were trying to piece together what had happened to their town.

On a quiet, cold January morning, six mysterious men arrived at the dimly lit streets of Cambridge. Dressed in fine clothes and long overcoats, the heavily armed men made their move. Traveling 55 miles from St.Paul, members of the Barker-Karpis gang had plenty of time to plan their heist.

Figuring that Cambridge was far enough away from any big city, the gangsters had plenty of time to hit several businesses along Main Street in Cambridge. Their goal: steal as much as they could and get outta town.

The gang did just that, hitting the Gillespie Auto first at 2 a.m. The sound of breaking glass alerted garage night watchman, Mart Dunning. Immediately Dunning was surrounded by the gang who instructed Mart to “call off his dog.” Mart was further persuaded to cooperate by a blow to the head with the butt of a gun. While being held hostage, the gang attempted to break open the large 4,000 pound safe. Having no luck with the safe, they emptied the cash register.

While at the garage, the gangsters eyed-up a getaway car. A fancy 1931 Buick 8 would fit the bill quite nicely. Exiting the garage and heading south on Main, the gangsters encountered Night Patrolman Frank Whitney making his rounds. Pointing their sawed-off shotguns at Whitney, they ordered him to “put his hands up.” With Whitney and Dunning in tow, the gang proceeded to loot Runyon Drug, Lewis Department Store, and finally Fairway Market. Loading the Buick with cash, clothes, and two hostages, the gang headed out of town.

In Soderville, about 25 miles south of Cambridge, the gang finally let Whitney and Dunning out of the car. The two hostages walked north back into Isanti County where they were able to phone for help. It wasn’t until 1971 that the gangsters were identified as Al “Creepy” Karpis and other members of the Ma Barker Gang. Karpis, in an interview, joked about how he and his gang got away with the Cambridge heist and $3,000 worth of loot.

A tragic link to the Cambridge heist of ‘32 was of two women associated with the Barker-Karpis Gang. The following March, just two months after the heist, two women were found murdered inside the getaway car. Margaret “Indian Rose” Perry and her girlfriend Sadie Carmacher were going to report the Cambridge heist to authorities if they weren’t paid a hefty sum of money. Someone on “the inside” alerted members of the gang to the plan.

Their badly burnt bodies were found in the Buick near Balsam Lake, Wisconsin. They were shot with a .38 caliber handgun and doused in nitric acid before setting the car ablaze. Clearly, these gangsters were cold-blooded killers, and Patrolman Whitney and watchman Dunning were lucky to escape with their lives. Especially considering Karpis and his gang murdered a Sheriff just two weeks before the Cambridge heist. Frank Whitney mentioned to authorities and the newspapers that, “he was caught off guard and was happy to survive the ordeal.”

The Gillespie safe currently resides at the Isanti County Historical Society. It, along with the Jack Lewis safe is available for viewing. You’ll notice the Gillespie safe is discolored, as it sustained cosmetic damage from the 2011 arson fire at ICHS. It will be refinished and painted at a future date. Look closely at the image of Mart Dunning as he’s pointing to the dial, the gang attempted to torch it open, but failed.

Bridging the past with the present, Frank’s grandson, 92-year-old Paul Whitney, and his wife Cynthia have been involved in the Isanti County Historical Society for over 20 years. Growing up, Paul said Frank didn’t talk too much about the incident.