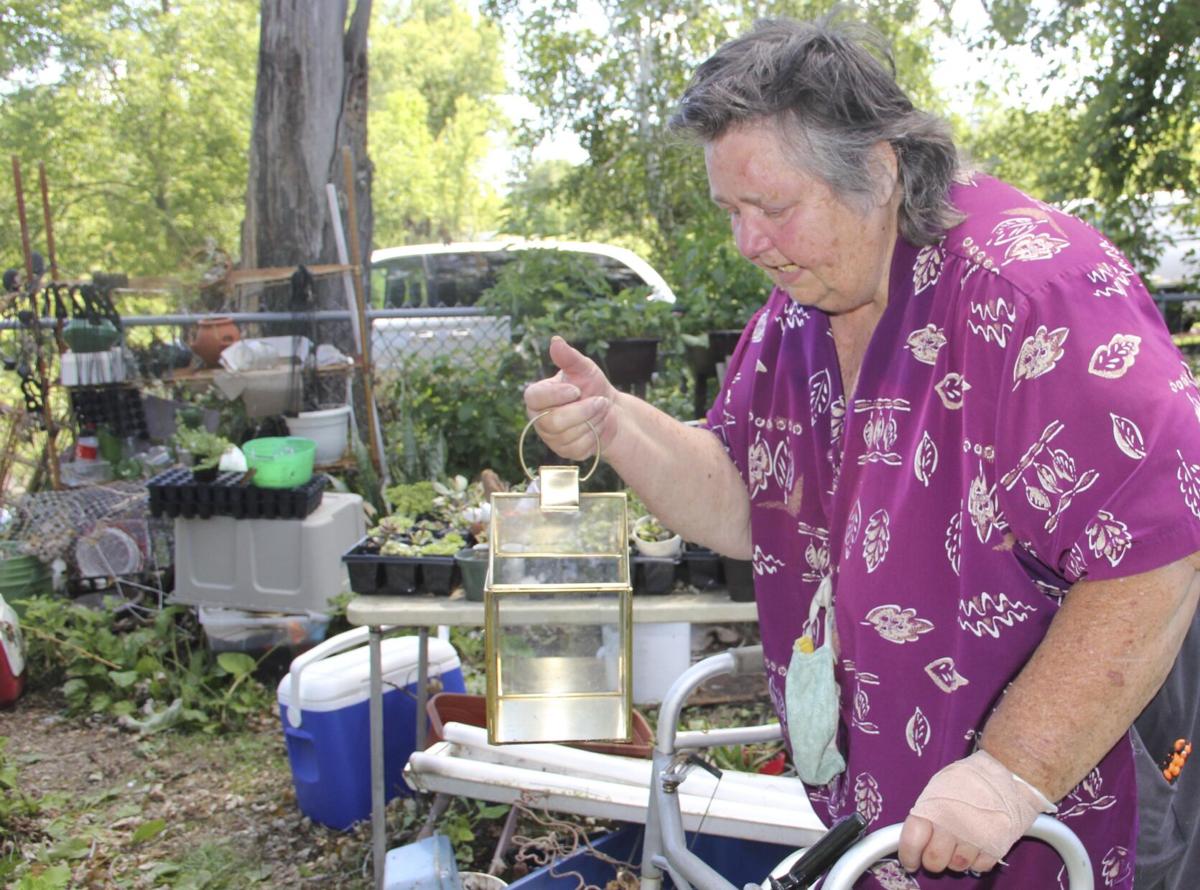 Jilly Arnoldy shows a glass and metal container that survived amidst the debris from the EF-1 tornado that downed trees into her front yard and house on July 18. Arnoldy raises and creatively pots plants to sell at Cambridge Farmers Market, but lost hundreds of outdoor plants in the storm. 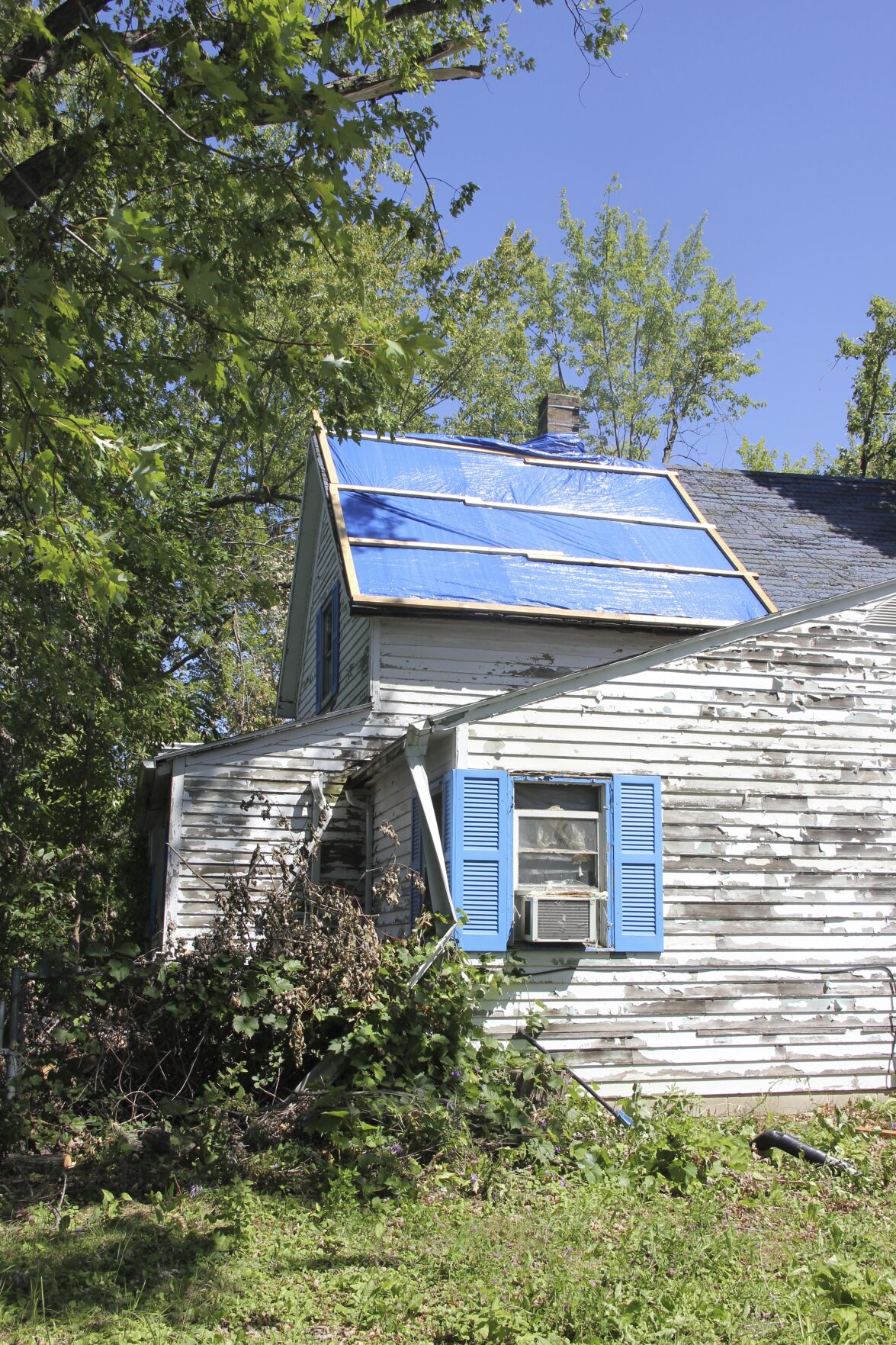 A large tarp covers the damaged area on the roof of Jilly Arnoldy’s house near Stanchfield after an EF-1 tornado downed trees in her yard on July 18. The twisted eave trough helped prove it was a tornado and not straight-line winds that caused the damage. The siding was scraped for an upcoming paint job.

Jilly Arnoldy shows a glass and metal container that survived amidst the debris from the EF-1 tornado that downed trees into her front yard and house on July 18. Arnoldy raises and creatively pots plants to sell at Cambridge Farmers Market, but lost hundreds of outdoor plants in the storm.

A large tarp covers the damaged area on the roof of Jilly Arnoldy’s house near Stanchfield after an EF-1 tornado downed trees in her yard on July 18. The twisted eave trough helped prove it was a tornado and not straight-line winds that caused the damage. The siding was scraped for an upcoming paint job.

Jilly Arnoldy was relaxing in bed watching an episode of “Perry Mason” just after 1 a.m. on Saturday, July 18, when she heard the wind suddenly pick up outside. She switched to another channel to find a news report that her Stanchfield Township home on 389th Avenue just west of Highway 65 was under a tornado warning.

Within moments, the weatherman’s voice cut out and the house went dark at 1:03 a.m. as an EF-1 tornado bore down on the property.

Arnoldy grabbed her three small dogs and escaped her south-facing bedroom to shelter in an inner hallway. She waited for the “freight train” sound and didn’t hear it, but her ears popped with the change in air pressure. She heard loud crashes and glass breaking as branches from the old oak trees in her yard landed on the roof and broke several windows.

She and the scared pups waited through two waves of breaking glass, rain and wind until she crept out through shards and puddles to check on the damage. From inside she found six window panes broken, her picture window was in danger of falling in after losing parts of its frame, and a downed limb blocked her front door. She couldn’t get out.

After a call to her daughter in Hinckley and the sheriff’s office, the 73-year-old Arnoldy sat in the dark and waited for help to come.

GIVE AND YOU SHALL RECEIVE

Jilly (a nickname for Jill since childhood) Arnoldy is more apt to be the one dispensing help than asking for it.

Since 1995 she’s been involved with the Salvation Army in Isanti County and is the voice callers hear when they dial the volunteer line for assistance with paying rent or getting gas cards. She’s also certified through the agency to set up mobile feeding units in disaster relief situations.

In January of this year she was featured in local and Twin Cities news outlets for coordinating area crafters to sew protective pouches for animals displaced by the wildfires in Australia. Through her efforts, over 2,500 items were created and shipped to the Animal Rescue Craft Guild for the protection of wallabies, joeys and bats.

Through that project she met Susan Bromen, an 81-year-old Cambridge resident, and a friendship formed. Upon hearing of Arnoldy’s brush with the tornado, Bromen knew she had to do something.

“She’s one to come to the aid of others,” Bromen said. “I knew I couldn’t financially or physically do much, if anything, to help, but I knew I could write a few letters, make a few phone calls.”

Bromen created a Facebook Fundraiser page called “Personal Emergency Fundraiser for Jilly Arnoldy” and put the word out. Bromen contacted local newspapers and KARE 11, who ran a story on Arnoldy and the tornado on Sunday, July 26.

The fundraising page and publicity were intended to give a hand up to Arnoldy since her 100-year-old home is uninsured. She’s lived in the home since 1995, but after her husband passed away in 2002, she found it impossible to cover all expenses and keep the home insured.

To help make ends meet, Arnoldy has been a staple at the Cambridge Farmers Market selling her crocheted items and a variety of plants including succulents and orchids. The money she makes at the market covers her winter heating bills.

According to Arnoldy, through the tornado, she lost about 400 plants out of the 500 she had growing on shelves and tables in her front yard and driveway. Family and friends helped her salvage the rest, and she plans to be back at the Saturday farmers market in a few weeks.

Adding insult to injury, a plumber who was called in to fix her hot water heater on Tuesday discovered it was improperly vented and would cost about $3,000 to correct and replace.

This last hardship is just the latest in a list that Arnoldy has faced in the past month including the death of a good friend whose funeral she couldn’t attend, an injury to her hand, the loss of a beloved cat and health challenges.

HELP IS ON ITS WAY

Back on that Saturday morning, Braham Fire Rescue got to Arnoldy’s home within minutes of her call for help and cleared enough debris from the front door to get her out.

Once the sun came up, she saw the wheelchair ramp she relies on was broken and twisted, and the front yard was a mass of downed limbs and scattered plants, pots, tables and outdoor furniture.

In the days that followed, her pastor and others from Stanchfield Baptist Church helped clear the mess, cover the roof, bring food and a listening ear. A woman Arnoldy doesn’t know left a casserole on the porch. Volunteers with Isanti County Beyond the Yellow Ribbon, with help from her son-in-law, have been fixing the ramp, and her granddaughter has been sticking close by to help with anything needed.

The attention has been new for Arnoldy, who is trying to take it a day at a time and be grateful.

“I’m thankful that my dogs didn’t get hurt and I still have a home,” she said. “It’s overwhelming not to be able to go and pay for it myself – where I have to ask for help.”

She’s especially thankful for her friend Susan Bromen who spread the word that Arnoldy could use a little help right now. Bromen feels her friend would do the same for her.

“She’s a pretty humble lady,” Bromen said of Jilly. “She’s a hard worker and not a complainer. She deserves a break.”