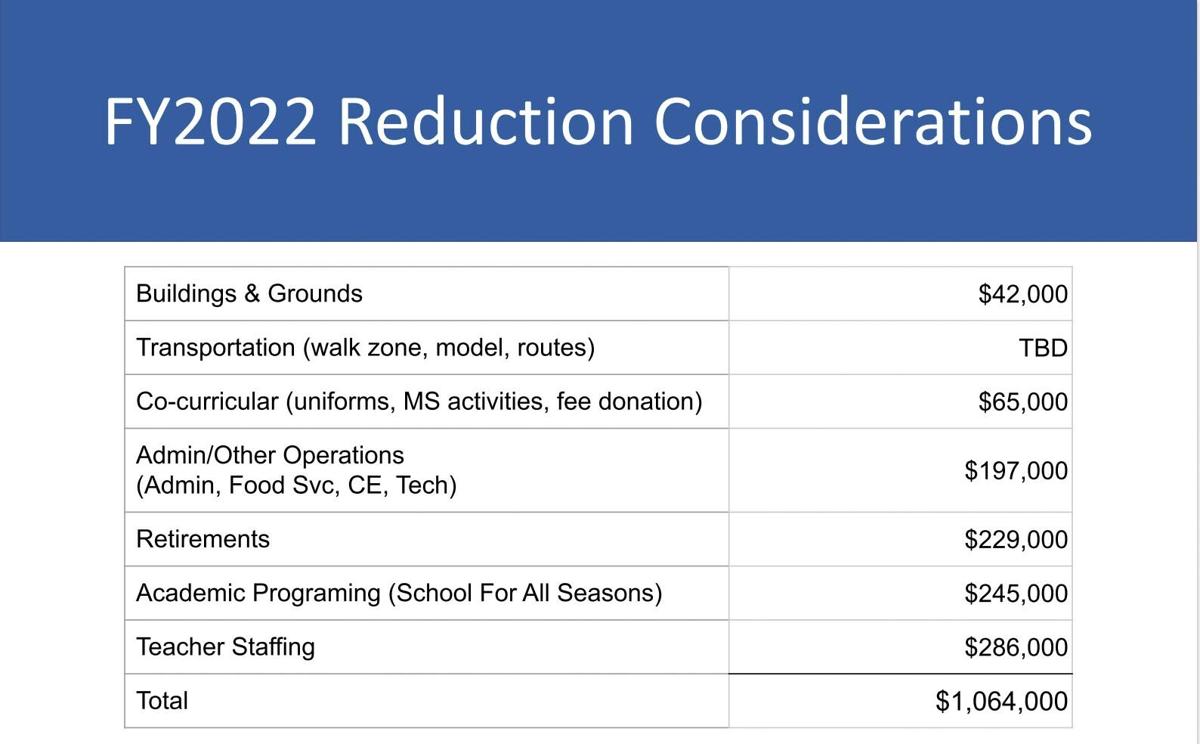 Part of the informational packet the Cambridge-Isanti School District rolled out during last year’s Operating Levy Referendum campaign was the fact that if the referendum isn’t passed by voters during the November election, the district would most likely be facing a third year of budget reductions. That prognostication is now becoming reality.

During the March 25 School Board meeting, Finance Director Chris Kampa and Superintendent Dr. Nate Rudolph gave a preliminary presentation of the district’s budget reduction strategy for the 2022 fiscal year. This strategy will result in the overall reduction of the upcoming budget by $1.7 million.

To begin the presentation, Kampa reminded the board that as a district, Cambridge-Isanti Schools is ranked in the bottom 7% in the state for general education revenue. The district is currently 308th out of 330 school districts in that one category. Compared to the average district, C-I Schools generates $6.4 million less in funding. To combat that, the district has cut $7.5 million in expenses over the last two years, yet still must make additional cuts this year.

“We’re addressing the expense side of the ledger, when our challenges is on the revenue side,” Kampa said. “The reason that is, is because revenue solutions take much longer and are the harder fix. There is really only four ways you can increase the revenue. You can grow your enrollment. You can get more fundraising or grants. You can have a referendum. Other than that, you can work with lawmakers to make laws that make school funding more equitable.”

How budget is being reduced

Unlike the previous two years, where the budget reductions were made by almost entirely cutting staff, programs, or increasing fees, almost half of this year’s adjustment is proposed to come from deferring expenses for another year.

“They (the finance department) have been able to identify about $700,000 of one-time funding that we are going to propose to utilize towards the reductions this year,” Dr. Rudolph said. “That defers the dollars another year. If we apply that this year, that makes our target $1 million in reductions. But its important to understand when we do so intentionally and we do so to make sure that we understand that that $700,000 will come back on top of our $1.7 million structural deficit next year. It doesn’t go away. We are utilizing this strategy to reduce the impact on students for the 2021-2022 school year, but we recognize that by doing so, we may face deeper cuts for the fiscal year 2023.”

In general, the remaining $1 million in reductions may come from administration and operations ($264,000), academic and class size ($736,000), and co-curricular/fees for service ($65,000). Specifically, the buildings and grounds department would see a $42,000 reduction, co-curriculars would see their entire reduction be in the form of the reduction of some middle school sports, reducing the purchase of uniforms, plus a donation from First Bank & Trust to offset the increase of student activity fees.

Rudolph said they have identified $197,000 in administration and other operations reductions, plus the net savings of $229,000 from this year’s retirements considering replacement costs.

Another $245,000 would come from the School For All Seasons.

“As you recall, last year we needed to reduce Minnesota Center, our Middle School Program. We were able to hang on to our K-5 School For All Seasons program at that time,” Rudolph said. “Now, due to a need for further reductions and declining enrollment, we need to consider School For All Seasons program again. The reduction represents approximately $245,000 and includes both personnel and operational savings.”

Rudolph said the district will be meeting with affected families in the coming days to discuss options for meeting their needs “in new and creative ways.”

Finally, $286,000 would be reduced in teacher staffing, which would include some “right-sizing for enrollment losses and scheduling adjustments.”Those teacher staffing reductions is proposed to come in the form of 5.5 Full Time Equivalent (FTE) in the Elementary, and 5.0 FTEs at the secondary level.

Rudolph emphasized these adjustments are currently only preliminary in nature. The district will now engage in listening to online feedback, conduct staff meetings, conduct board presentations and discussions, plus hold a virtual public meeting, which is scheduled for April 7.