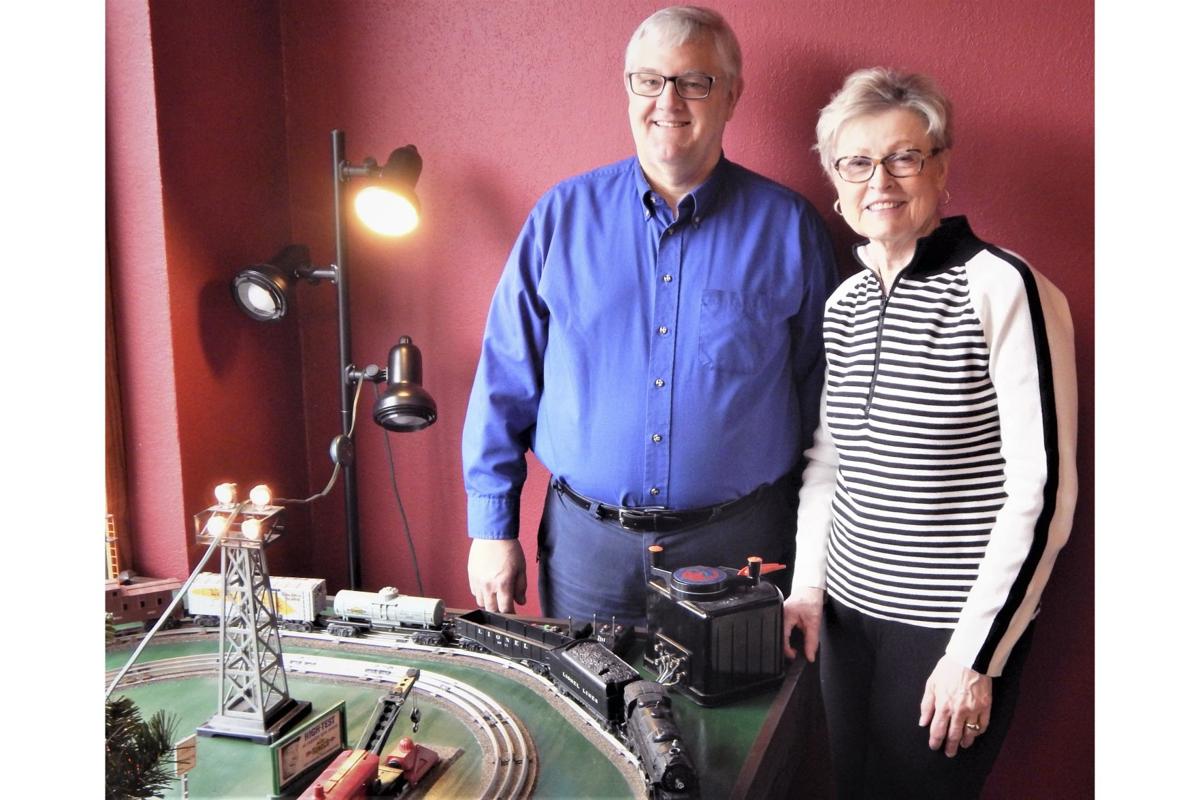 Monte Dybvig (left) and Karin Barfknecht, whose husband Wilson Barfknecht received the train set as a child, enjoy the set on display at Doctor Monte’s Auto in downtown Cambridge. 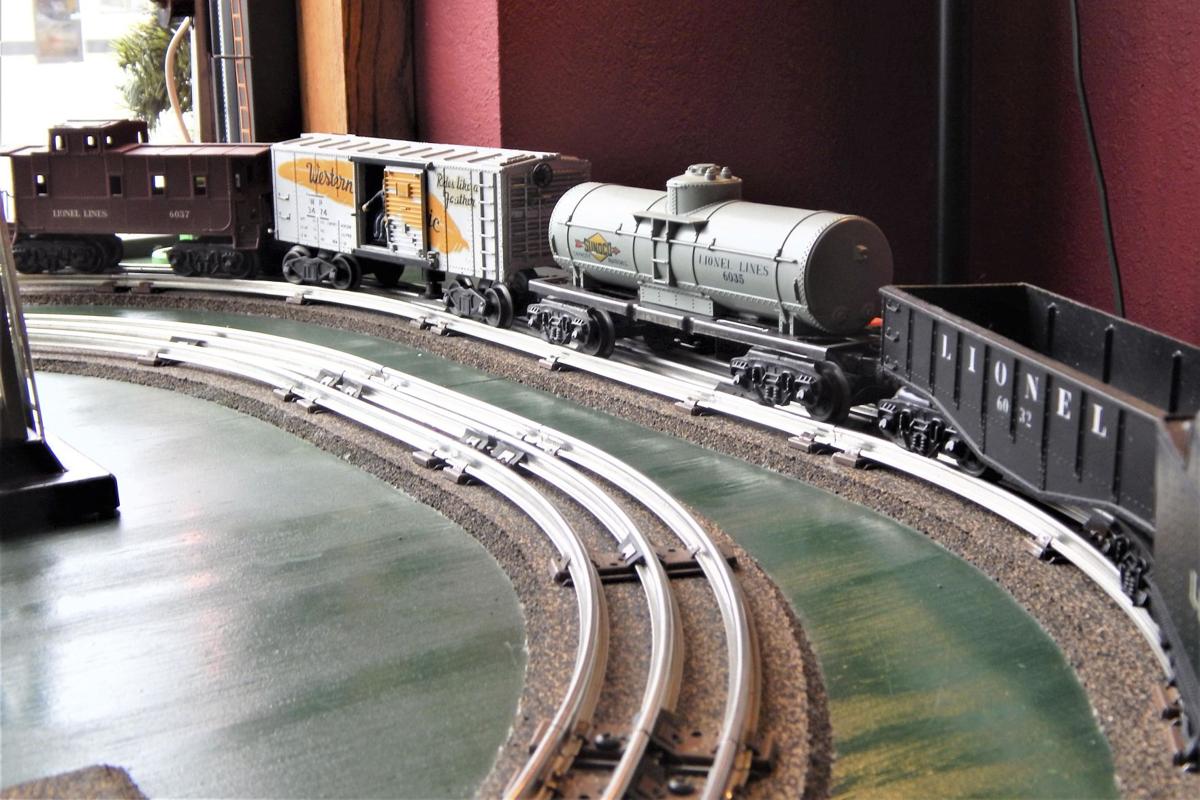 A train set originally received for Christmas in 1953 by Wilson Barfknecht was stored for decades due to his family’s grief over the loss of his sister Darlene. 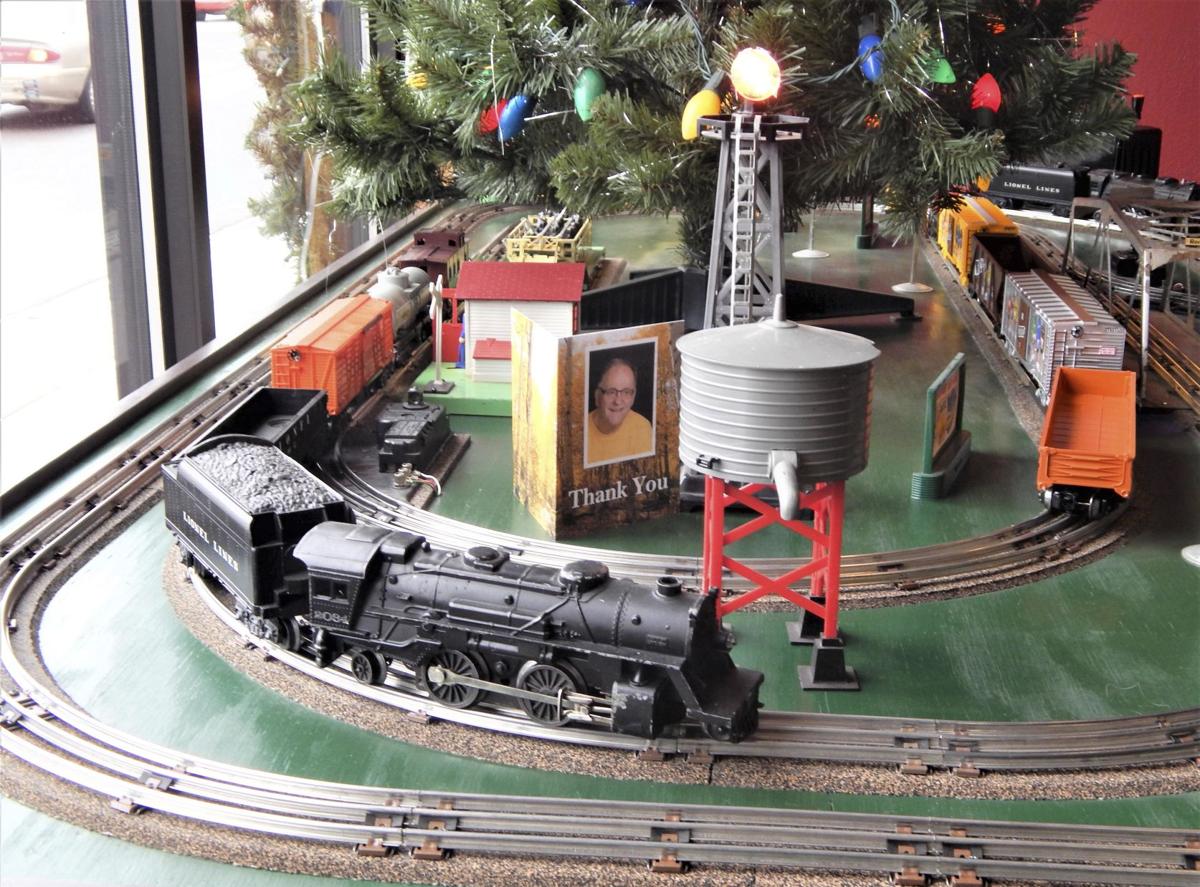 Sitting among the buildings, tracks and cars of the model train set, Karin Barfknecht placed a thank you card with a photo of her husband Wilson Barfknecht, who passed away in November. 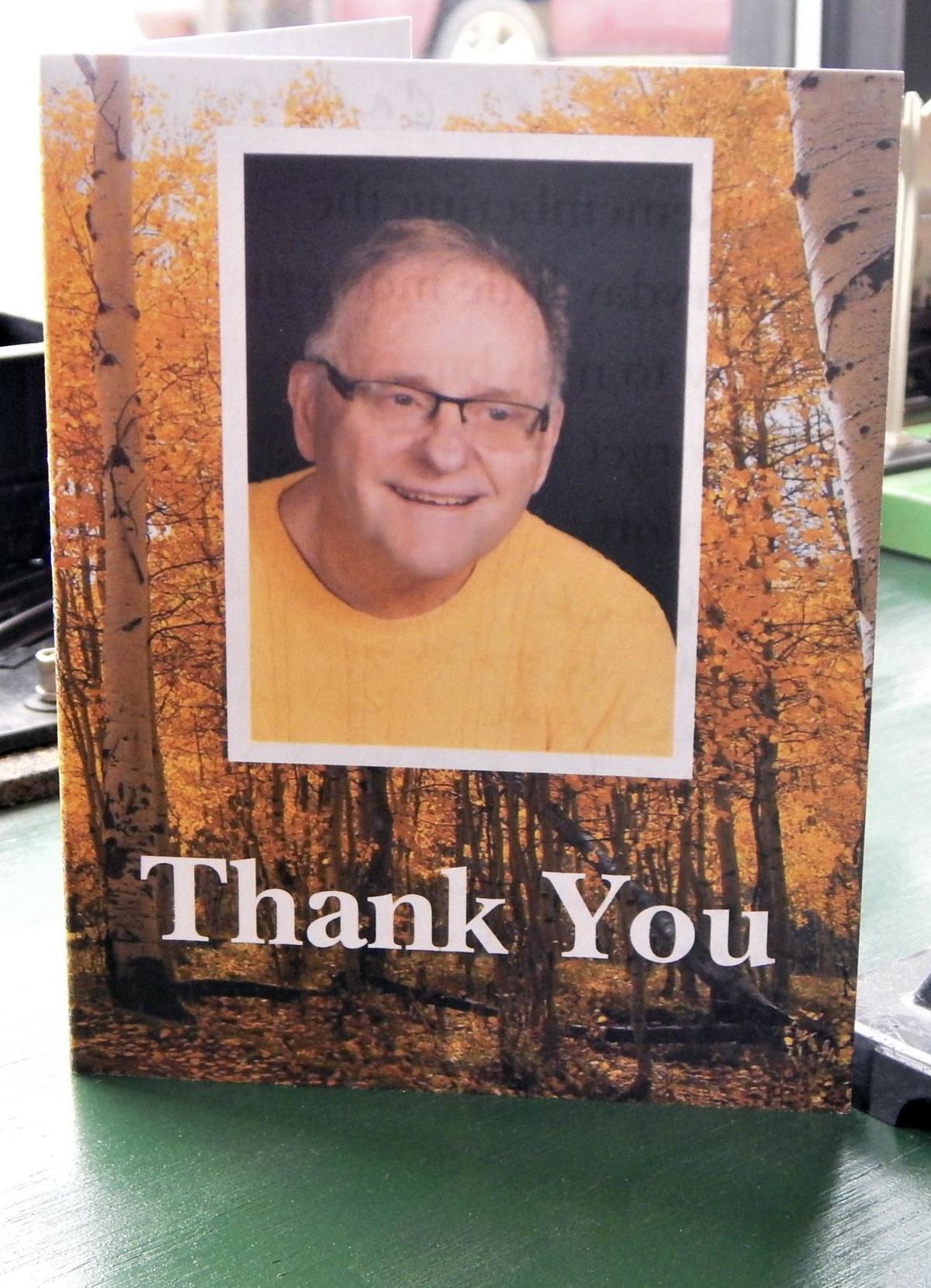 A close-up of the photo of Wilson Barfknecht, original owner of the train set.

Monte Dybvig (left) and Karin Barfknecht, whose husband Wilson Barfknecht received the train set as a child, enjoy the set on display at Doctor Monte’s Auto in downtown Cambridge.

A train set originally received for Christmas in 1953 by Wilson Barfknecht was stored for decades due to his family’s grief over the loss of his sister Darlene.

Sitting among the buildings, tracks and cars of the model train set, Karin Barfknecht placed a thank you card with a photo of her husband Wilson Barfknecht, who passed away in November.

A close-up of the photo of Wilson Barfknecht, original owner of the train set.

Many things have stood the test of time of bringing joy to children around the world. An even greater reward is when that hobby or passion follows them through their entire life. Among many of these child-like wonders is the love of trains.

Though the age of technology has brought our youth iPhones, hover boards and many futuristic-type technologies, not many people can say they are not still fascinated by a real live steam locomotive going through town or stopping to watch a train set on display at a mall or toy store.

One Isanti County family has been gracious enough to pass on their love of a train set to others through the public display of a vintage train set passed down through their family.

Karin Barfknecht and her late husband, Wilson Barfknecht, understood more than most the joys of an old train set and the simple gift it brought them the last years of Wilson’s life.

The engine that could and then couldn’t

Wilson had fond memories of the train set his mother and father brought home to him and his sister in the year 1953.

“My husband and his sister Darlene got these trains for Christmas (in 1953), and they ran that winter and the next winter,” Karin recalled. “And then she got kidney cancer and died in 1955 at the age of five.”

Not being able to bear the emotional loss of their daughter, Wilson’s family, in their grief, boxed up the train set and put it away. They never had another Christmas with the train set again.

“His parents could no longer – well, it was just too painful to have the trains out,” Karin said, “so they packed them up and put them away. They were never ran again in their home.”

When his parents were much older and the Barfknechts were moving Wilson’s parents, the box was uncovered.

“We took it home with us here in Cambridge,” Karin said. “But we did the same thing – we put it away someplace, probably in a crawl space, and we left it that way until one day we were cleaning things out.”

The couple discussed what they should do with the trains that continued to be packed up, put away and forgotten.

The train cars that transported memories

Karin, a first-grade teacher for the Cambridge-Isanti School District for 35 years, and Wilson, a food inspector, decided on that day when they unpacked the forgotten train set that they should do something with such an old treasure.

“We were cleaning things out,” Karin said, “and we ran across the trains, and I said to Wilson, ‘Maybe we should have them repaired and fixed up.’”

So the couple decided to find someone who would be able to get the train set running again after almost 60 years of being in storage.

Finding someone willing to take the time and energy to complete such a delicate and time-consuming task was cumbersome. But in 2013, they had a lead that they may have found their man – Monte Dybvig, of Doctor Monte’s Auto in Cambridge.

“We, kind of by word of mouth, heard that Monte was a train guru,” Karin recalled, “so we came down here and asked if he would be interested in restoring them.”

With the train set box in tow, the Barfknechts were hoping he’d say yes.

And that’s exactly what he did.

After Monte restored the trains around 2014, Wilson was able to bring his childhood train set home – a blessing he would hold onto until the end.

During the process of restoring the trains, the Barfknechts found out that Wilson had Alzheimer’s, a disease that destroys one’s own memory. Just as he was getting a memory back, Wilson would face the greatest memory battle of his life.

The Caboose that Carried Him Home

Wilson was enraptured, grateful to have his train set back. The nostalgic presence of the trains could not have come at a more profound part of the track laid down for Wilson’s path in life. Being diagnosed with Alzheimer’s, the effects were beginning to take over. But the trains had restored a sense of peace and wonder within his daily life.

“The main thing for me,” Karin said, “was that Wilson had something those last few years of his life that brought him joy. Just to bring that back, he could relive some of those memories. We had chairs down there in the basement to watch them, and it just brought him so much joy.”

In 2018 Wilson went in to Memory Care, and Karin was looking again for someone to help with the trains by taking them over. After discussing the matter with her daughter, they decided it would be better to find someone who wanted them.

“I told her, ‘I think we should give them to Monte because what he provided for Wilson was wonderful,’” Karin said.

At the end of the summer of 2019, Dr. Monte brought the train set to its new home – his auto repair shop at 115 Main Street North in downtown Cambridge.

Monte understood the significance of keeping Wilson’s memory alive and remembers the discussion he had with Karin about acquiring the train set.

“I had the most wonderful response from (Karin),” Monte said. “She said, ‘It really doesn’t matter – I would have paid anything for the last few years that Wilson had with these. It was so special, and you can’t put a dollar amount.’ I haven’t forgotten that.”

Monte not only fixed the trains, but designed and constructed the layout for the train set that is now on display.

“Anyone is welcome to come see the display – that was the deal,” Monte laughed and added, “I even had a customer yesterday call me up and ask if he could bring his grandkids in to see the trains – just to see the trains.”

Wilson passed away in November of 2019 at 72 years of age after the disease took over completely. But the memories a simple train set provided him and his family at the end of his life were profoundly greater than anything the family could put a price tag on as the caboose disappeared around the bend, and the last whistle blew for Wilson Barfknecht.