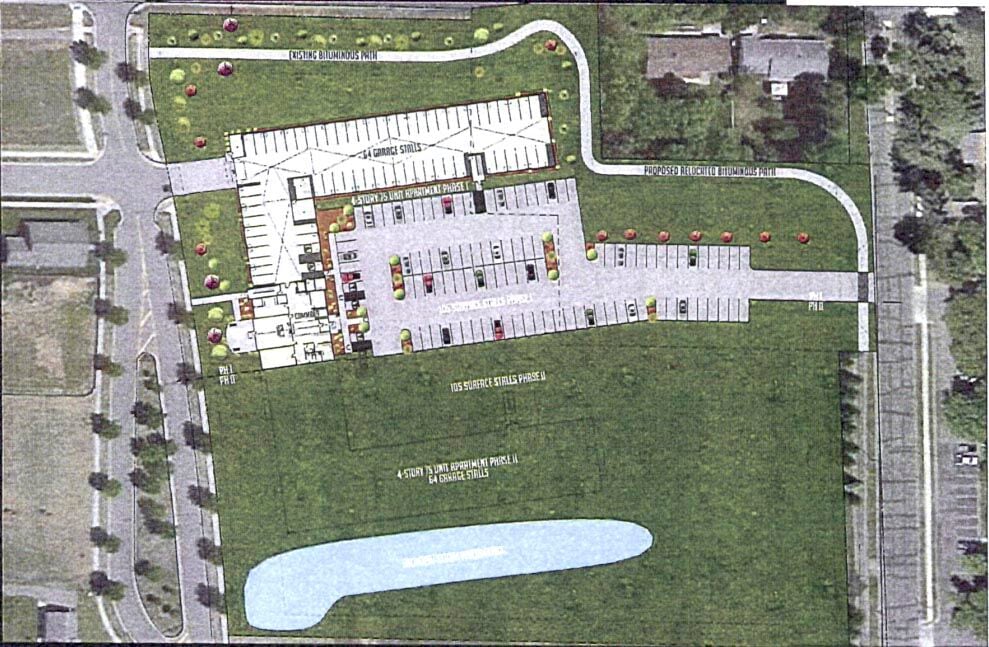 This overhead look shows the approximate location of the proposed apartment complex to be built in Heritage Greens during phase 1. For reference, South Fern Street is to the left, Dellwood Street is on the right, and 11th Ave SW is just off the top.

Corey Bustrom (center) is sworn in by Cambridge Mayor Jim Godfrey (right) as new Fire Chief Todd Tomczik looks on during the Nov. 16 Cambridge City Council meeting. According to Tomczik, they had the “good problem” of having to choose between four excellent candidates who expressed an interest in the position.

This overhead look shows the approximate location of the proposed apartment complex to be built in Heritage Greens during phase 1. For reference, South Fern Street is to the left, Dellwood Street is on the right, and 11th Ave SW is just off the top.

Corey Bustrom (center) is sworn in by Cambridge Mayor Jim Godfrey (right) as new Fire Chief Todd Tomczik looks on during the Nov. 16 Cambridge City Council meeting. According to Tomczik, they had the “good problem” of having to choose between four excellent candidates who expressed an interest in the position.

For nearly two decades there has been several large portions of the former Cambridge State Hospital grounds (now known as Heritage Greens) that have remained empty fields. While recently the area has seen a steady flow of new, single-family homes being built, there still remained two noticeable untouched areas.

During the Nov. 16 council meeting, the council heard a presentation from Kyle Didierregarding a proposal to build a development on that 9.6-acre lot which would include a total of 183 “homes,” including a 75-unit apartment complex, plus 33 single-family townhomes and a green space in between, built in three phases. According to Community Development Director Marcia Westover, the development is predicted to be appraised at approximately $29 million.

Didier told the council the apartment complex, which would be part of the first phase of the project, would be built on the northern-most section of the lot. It would comprise of three levels of apartments above parking initially in an “L” shape, with an extension of the complex turning it into a “U” shape during phase two. There will be a mixture of studio, one bedroom, and two bedroom apartments, with current minimum rentals being around $895/month. He said the complex would have all up-to-date amenities, including some that came to light as being needed during the COVID-19 pandemic.

The single-family townhomes would be located on the southern-most section, which would place them closest to a majority of the existing single-family homes already constructed. The green space would take up 40% of the lot, and could include a holding pond, walking path, or a dog park.

“We are sensitive to, given the site, yes there is density, but 40% of the entire site will still be dedicated to green space,” Didier said. “We don’t want to pack just a bunch of things in there. We are respectful of how the neighborhood functions today.”

Not everyone in favor

The project isn’t without a small amount of controversy as many current residents of Heritage Greens voiced their opposition to the project during the public hearing held during the Nov. 4 Planning Commission meeting, prompting the commission to vote 4-3 to recommend denying the request to amend the Planned Unit Development (PUD) to include multi-family buildings.

“This room (council chambers) and that room (the City Hall lobby) was completely full of concerned citizens,” said Planning Commission member David Redfield, who spoke to the council “as a representative” of the residents of Heritage Greens. “(This) apartment complex does not (make sense). It’s right in the middle of a single-family community, and it’s zoned single-family housing as it sits.”

Westover noted the overall tone of the Planning Commission Members who voted in favor of the PUD amendment was that the city desperately needs more of this type of housing and they got the sense the opposition was “NIMBY” (not-in-my-backyard) in nature. She added the project plans fall within all city ordinances and codes, with the lone exception of the apartment complex would be 48 feet tall, which is three feet over current ordinances. She said the extra height was to accommodate nine-feet high ceilings in the apartment units, which the developer said is a popular feature with renters. Because it meets all city requirements, Westover said it would be “very detrimental” to the city if the council denied the PUD amendment request.

Didier told the council they heard and understood the residents’ concerns, they laid out their original plans with those concerns in mind, and they were willing to constantly be in communication with the city and the Heritage Greens residents throughout the construction. He also reiterated what Westover had said that projects such as this historically have increased the value of the area, rather than being a detriment.

‘Between a rock and a hard place’

During council discussion, Mayor Jim Godfrey said the fact the city is the seller of the land makes denying the PUD amendment much more difficult, noting city representatives have been negotiating with the developer to purchase the land to the extent of having a purchasing agreement in place.

“We don’t have any findings that we can use to deny this request,” Godfrey said. “If we were to deny this, we would open up all of the citizens to possible lawsuits, (and) we probably would not be able to sell another city-owned property to a developer in any near future because of the reputation we would have based on agreeing to a sale and then reneging on that agreement within a month or two would put us in an awkward position. Therefore I will be voting in favor of the motion knowing that disappoints every one of the citizens who are here tonight.”

Ultimately, the council unanimously approved the PUD amendment, along with establishing the land as a housing TIF (tax increment financing) district, and the preliminary and final plat for the project.