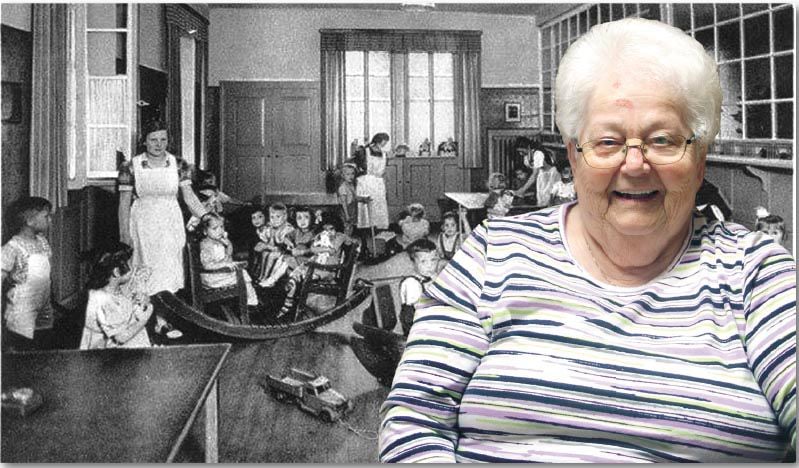 Ruth Parker, who spent her childhood in an orphanage in Germany, fondly remembers the American soldiers bringing presents to the orphan children in 1945 after the end of World War II. The black and white photo shows the St. Nikolaus orphanage in Landstuhl, Germany, in the 1940s. 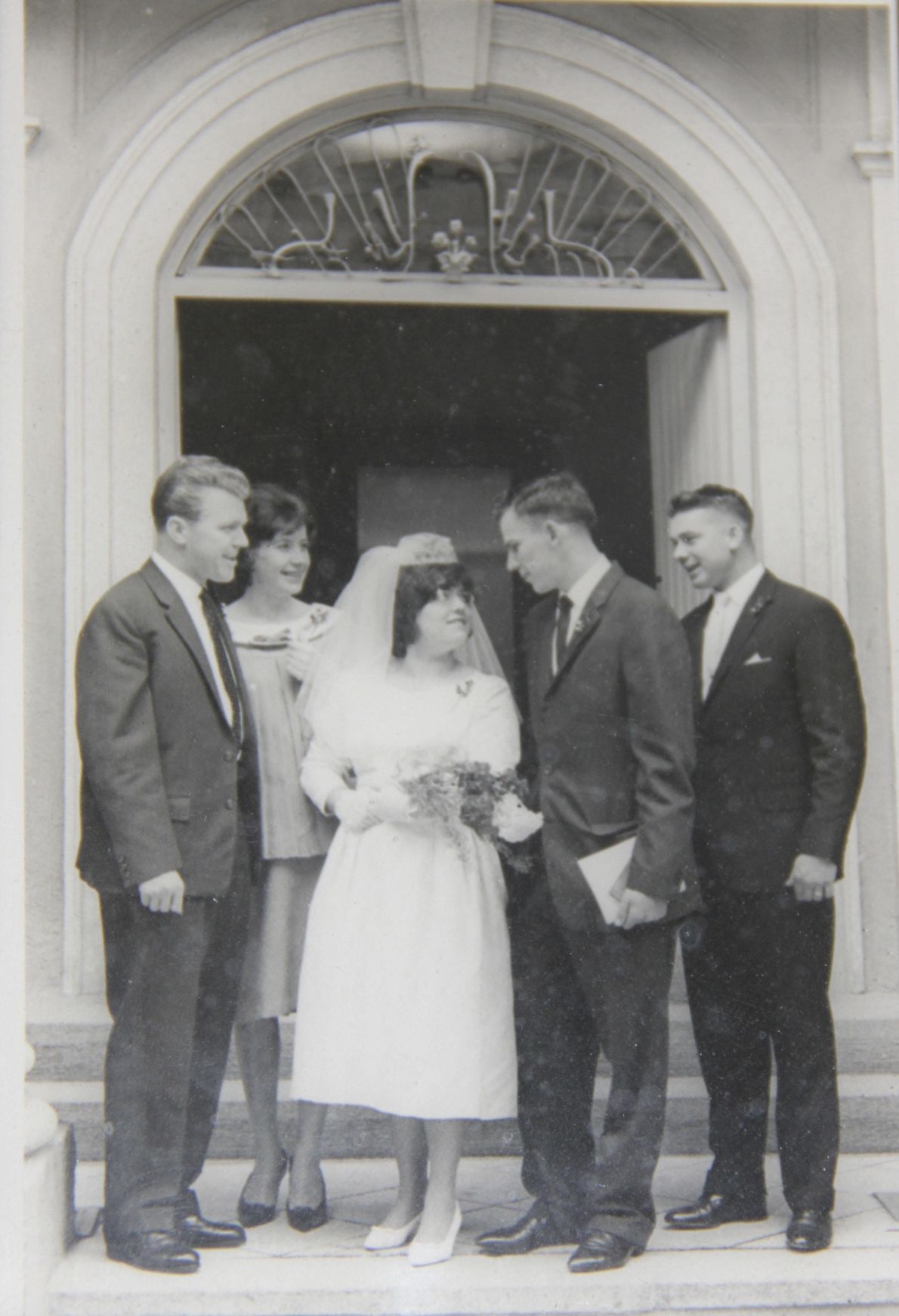 After a mutual case of “love at first sight,” Ruth (Weible) Parker and Laurie Parker married in 1961. GI Laurie wrote home to his mother after his first day with Ruth: “I met a German girl. I’m bringing her home. She’ll be my wife.”

Ruth Parker, who spent her childhood in an orphanage in Germany, fondly remembers the American soldiers bringing presents to the orphan children in 1945 after the end of World War II. The black and white photo shows the St. Nikolaus orphanage in Landstuhl, Germany, in the 1940s.

After a mutual case of “love at first sight,” Ruth (Weible) Parker and Laurie Parker married in 1961. GI Laurie wrote home to his mother after his first day with Ruth: “I met a German girl. I’m bringing her home. She’ll be my wife.”

Christmas 1945: “I can remember it was the nicest Christmas we ever had. The American soldiers came. They gave us a Christmas to remember.”

Ruth Parker was a 9-year-old girl living in an orphanage in Landstuhl, Germany, when the soldiers came that year. She got her first rag doll.

“I remember it all my life,” she said.

The 83-year-old Sandstone resident looks back every Christmas to those World War II years as the local German Club meets to plan the annual Epiphany service at St. John’s Lutheran Church of Isanti (see sidebar).

Many of the club members have similar stories of hiding in bomb shelters and losing family members. Parker’s story begins just as the war did in 1939.

Life in the orphanage

“I was born in 1936,” Parker said in her German-accented English. “World War II started in 1939, and my mother gave birth to my brother in June of 1939, and she died in childbirth. My dad was already gone as a soldier, so then we lived with an uncle.”

The new baby brother was sent to an orphanage for infants while Parker and her four other siblings were passed among aunts and uncles.

“My dad came home on leave, and he didn’t like it – the way we were treated,” she said. “He found us all kind of dirty and not looking the way we were supposed to, so he put us into the orphanage until he could come back. And he never came back.”

Two weeks before the end of the war, her father went down with the submarine he served in.

Rather than being a temporary fix, the orphanage became Parker’s permanent home. It was housed in a convent and operated by nuns – and held 500 children.

“For Christmas we got nothing,” Parker recalled. “They would put up like a dollhouse, but we had to share everything. Nothing belonged to us. And after Christmas it got put away until next year.”

The memories aren’t all bad. Parker remembers the children dressing in their Sunday clothes and waiting breathlessly for a set of big doors to open to reveal the Christmas tree all lit up. The children gathered around it and sang Christmas songs.

Through the early 1940s as the war ramped up in Europe, life in the Landstuhl orphanage became frightening.

“People that have never been through a war – they don’t know how it is,” Parker said. “In the middle of the night the sirens go off. We had to grab the mattress, put it on our head and run into the bomb shelters.”

She remembers the shelters being deep in the ground and “just like the house, like a big underground room that held 500 kids.”

It was outfitted with everything the children would need for an extended time – food, water and bathrooms.

“We had to stay until it was over, until the sirens went off – sometimes for days,” Parker said. “Sometimes we didn’t even get out because the bombs were flying. There was a lot of shooting going on. It was war.”

There wasn’t much to occupy the hundreds of frightened children during those long days and nights. Parker remembers playing games or knitting, and sometimes suffering discipline at the hands of the nuns.

“In Germany children should be seen and not heard,” she said. “That’s the rule.”

Victory in Europe was declared on May 8, 1945, with the unconditional surrender of Nazi Germany’s armed forces. From that day on, American soldiers flooded into Germany.

Parker said the nuns kept the children in the bomb shelters even after the war was declared over.

“That was our security,” she said. “These Americans came, invaded Germany. We didn’t know what they were going to do.”

Some of the soldiers spoke in German to the nuns or the children saying, “Come on out, we won’t hurt you.” They resorted to throwing candy in the streets to coax the children out.

“The nuns said, ‘You guys cannot go out. You got to stay in. They are going to kill you. The candy has poison,’ and all that kind of stuff,” Parker said. “But me – I always had to see what’s going on. I was curious, nosy. My curiosity was killing me.”

She said all the orphan girls wore little aprons that buttoned in the back, and she snuck outside one day and filled her apron with candy.

“When I came in I said to the other kids (whispering), ‘I got candy,’” Parker said.

But the thrill was short-lived when the nuns found out.

“They thought the candy was poisoned,” she said. “I had to sit on the chair and eat the first piece of candy, and if I wasn’t falling off then I could give the candy to the rest of the kids – if I didn’t fall over dead.”

The simple lack of poison in the candy was a first step to building trust between the nuns and the American GIs. By Christmas of 1945, the nuns allowed a special Christmas party.

“The American soldiers came,” Parker recalled. “They put up a big tent. They gave us a Christmas to remember.”

At age 9 she received the first doll she could call her own.

“We all got our own little present that we got to keep,” Parker said.

From that Christmas on, the influence of Americans would change the course of Parker’s life.

She stayed at the orphanage until age 21, after attending five years of nursing school. She worked at a hospital while living with an aunt in the 1950s. American soldiers were still stationed in the area during the country’s rebuilding process.

“All the girls were talking about those GIs, those soldiers,” Parker said. “And I said, ‘I’m not going to go with an American soldier!’”

That resolve was put to the test one day in a restaurant when she encountered Minnesotan soldier Laurie Parker (named for the “Little Women” character). He and four buddies were heading out the door as Ruth sat with a lemonade at a table near the door.

“The last guy grabbed me by the arm and took me out and said, ‘Come on, you’re mine!’” Parker said, then paused. “My husband.”

The unorthodox introduction got her attention, and that night she headed out with a girlfriend to a local “turmschenke” or tavern where the GIs were known to frequent.

“I get there and walked in,” Parker said, “and wouldn’t you know in the corner at the table facing the door was my husband. ... He saw me and said, ‘Ha!’ and grabbed me.”

They took a spot on a bench out front and tried to converse when neither knew the other’s language.

“He had a book, so we talked with the book,” Parker said. “He would find a phrase in the book in English to ask what my name is and all that kind of stuff.”

That night, she said, Laurie wrote a letter to his mom and said, “I met a German girl. I’m bringing her home. She’ll be my wife.”

That was 1957. They married in 1961 in Germany, then came to the United States in 1962. They started out with Laurie’s parents in Rush City, where he worked for the railroad. Ruth’s nursing credentials weren’t accepted here, so she took a waitressing job at The Coffee Cup, a diner in Rush City.

“Everybody said, ‘The Parker boy brought home a war bride,’” Ruth laughed, “so everybody came to see me. They had business like you wouldn’t believe.”

Over the years they adopted two boys, prompting Parker to become a U.S. citizen in the 1960s. Grandchildren followed, and life went through its paces.

Laurie passed away in 2016, but throughout their lives he and Ruth took regular trips back to her homeland. She eventually reconnected with her surviving siblings – except for one sister whom she never located.

Parker would say it was a hard road that brought her to where she is today, but as she meets with those German Club friends at the holidays, she can reminisce about the old country with no regrets at leaving it behind.

Epiphany, in Christian custom, commemorates the visit of the three kings to the Christ Child and is traditionally celebrated on Jan. 6.

Pump organ and accordion music will be performed.

The 1882 church will be illuminated by candles and antique kerosene lamps.

Authentic German treats will be served.

The service is historically attended by 20 or more members of the German Club, hailing all the way from St. Paul to Sandstone.

An English-language service is offered at 4 p.m. the same day (Sunday, Jan. 5).