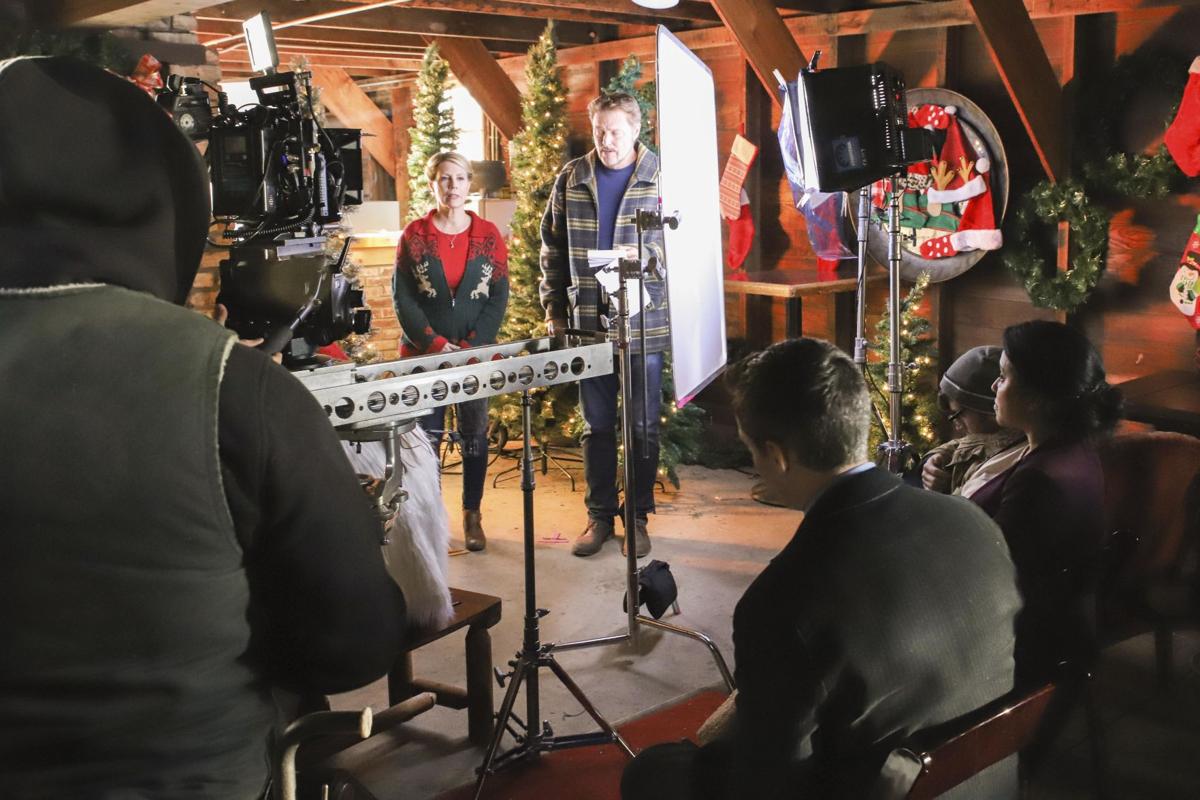 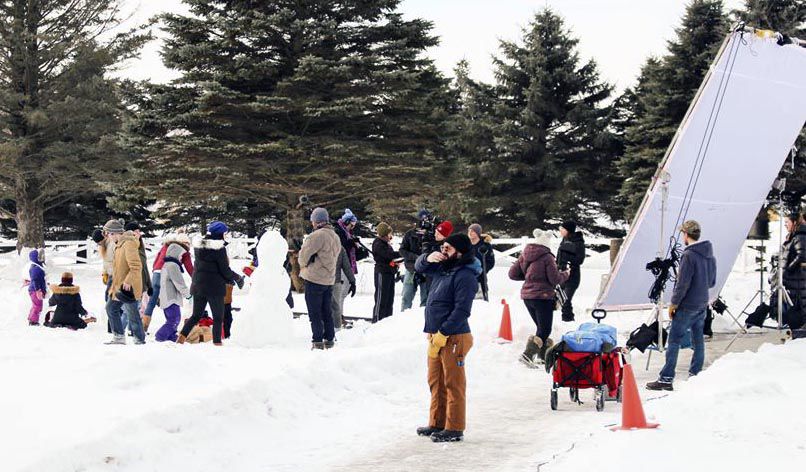 The production company shot indoor and outdoor scenes on the property, including this snowman-building scene. The farmstead has seven buildings on over 30 acres.

The production company shot indoor and outdoor scenes on the property, including this snowman-building scene. The farmstead has seven buildings on over 30 acres.

The Erickson Farmstead, located just south of Isanti, has become well-known for its endurance through time – having made its debut as a productive potato farm, making it on the National Register of Historic Places, serving the community and surrounding areas as a wedding and gatherings venue the last couple years – and now has become the setting for a possible Hallmark Christmas movie.

Dennis and Julie Davis, owners of the Erickson Farmstead, were caught off guard when Elizabeth Snoderly, executive producer of Love Christmas Films LLC, contacted them two months ago and wished to have their farmstead be the setting for an independent film her company was soon putting into production.

“I thought a friend might be pulling a prank on me,” Dennis said.

The Davises were reeling with excitement after finding out it was a legitimate request.

On the verge of disappearing

The Davises bought the property two years ago with plans of restoring it, but wanted to share it with the community as well. They decided a wedding and gatherings venue would suit their interest best.

“We have a soft spot in our hearts for the old farms that continue to disappear,” said Dennis.

degrading, praying that someone would buy it when it went up for sale seven years ago and refurbish it. But, after three years of seeing the stubborn “For Sale” sign, Dennis said he finally got the courage to call realtor Matt Anderson, who convinced him he must come see it.

“I was both horrified by the condition, but amazed at the potential,” Dennis said.

In the ongoing pursuit of restoring the farmstead, he said the couple have put four new roofs on buildings and everything has been painted at least once. They have almost completed the main house, and they hope to add the hay barn to their venue in years to come.

Attracting the attention of Hollywood

Despite all the updates, the farmstead hasn’t lost any of its authenticity, and that very thing attracted the production company. It also aligned perfectly with the movie script, said Dennis.

Shooting for the movie was impending when Kyle Moe was brought in to be the director of photography. He had commented about how he had been to the place the movie was written about – referring to the Erickson Farmstead he had stayed at with family over the holidays.

Sunday, Jan. 26, marked the first of 14 days of shooting for the moviewith the working title “Christmas Inn Farmstead.” In the movie, a historic inn is going up for sale and competing realtors are invited to stay there for a week to get the feel of the property – and surprise! – a couple of them just might fall in love.

In describing what that first day of shooting was like, Dennis said the buildings and floors of the main house were almost immediately filled with all the equipment and stuff that was brought in. A whole box truck was filled with lighting, and besides the Christmas décor the Farmstead had already left up, tons more was added.

“It’s a little crazy,” said Dennis. “There are anywhere from 35 to 50 crew and cast there everyday. They are everywhere, but really just go about their business fulfilling their responsibilities to the shoot.”

A daily schedule of filming is all over the board, said Dennis. Yet they aim to shoot three to four scenes a day. Sometimes they arrive early morning, other times later if there are night scenes. The whole farm has been used in the production except for the hay barn and potato cribs that didn’t find a fit within the script.

“The main house has been the focal point, but they have used the grounds, the trail around the lake,” he said. “The summer kitchen has acted as a house in Arizona, and one of the opening scenes has been shot in the carriage house.”

Dennis’s “spoiler alert” is that his neighbor, Ben Smith, who has a carriage, buggy and sleigh company, was hired to do a sleigh ride scene with his two draft horses.

“Wait until you see this scene in the movie!” Dennis said.

The Davises have been thrilled to see all the business that the production crew has brought to the area and how so many people have been given the opportunity to participate.

Local caterer LeFebvre’s Catering has been making breakfast and lunch for the crew, and the new Best Western Plus in Isanti has been a retreat for most, said Dennis. The cast and crew are from all over the country with only one main actress from Minnesota – Susan Chambers, who plays the character Donna Erickson in the movie.

“The crew could not be nicer and more sincere,” commented Dennis. “They are fantastic – all of them.”

After the lights come down and the equipment is packed away, editing on the film will begin and run through June, according to director Snoderly. Once completed, the film will be shopped around to channels like Hallmark or Lifetime, with the hope the Erickson Farmstead will warm the hearts of viewers across the country come Christmas.