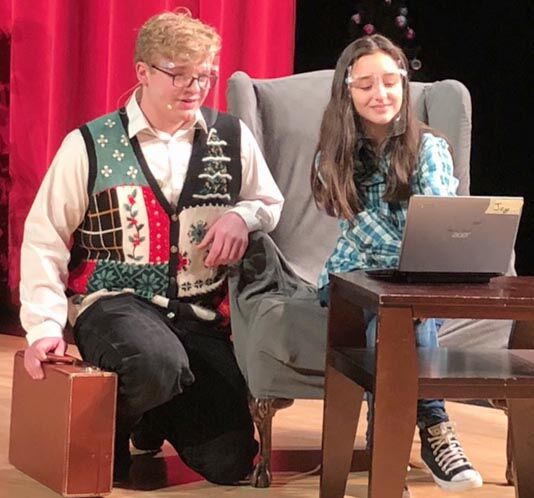 Paul (Caleb Newman) and Joy (Kat Yearwood) discuss Joy’s latest romance novel during a scene from the North Branch Theatre Department’s performance of “The Holiday Channel Christmas Movie Wonderthon.” This year’s fall play will be performed on stage, but with no live audience and livestreamed three times this weekend. 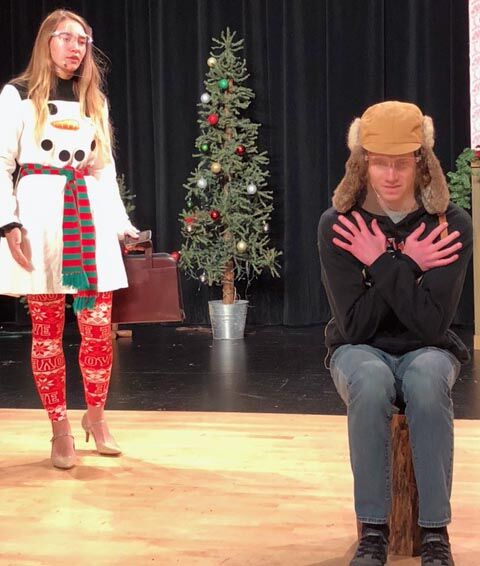 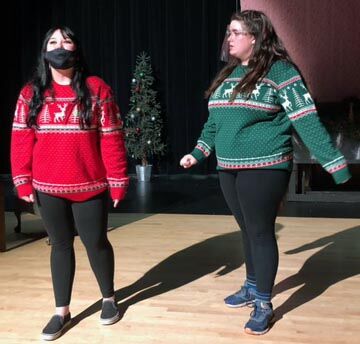 Narrators  Aubrey Denesen and Alina Bushinger discuss the next part of the show. 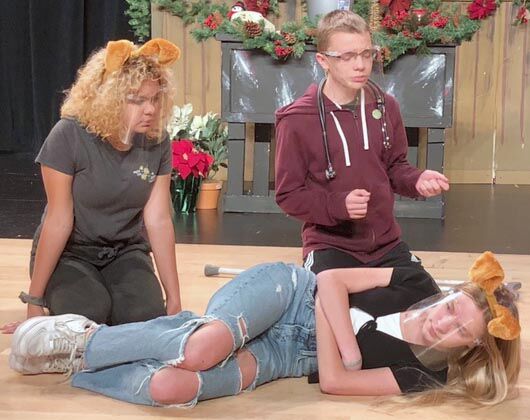 Paul (Caleb Newman) and Joy (Kat Yearwood) discuss Joy’s latest romance novel during a scene from the North Branch Theatre Department’s performance of “The Holiday Channel Christmas Movie Wonderthon.” This year’s fall play will be performed on stage, but with no live audience and livestreamed three times this weekend.

Narrators  Aubrey Denesen and Alina Bushinger discuss the next part of the show.

With another wave of coronavirus making an appearance and restrictions tightening, the North Branch High School Theatre Department is offering its fall play in a new, corona-conscious format – a livestream of three performances on Nov. 20-22.

“Our goal for this show,” said theatre department director Laura Michels, “is to create something fun and happy to distract people from all of the stress and negativity going on with COVID.”

To do that, the show, named “The Holiday Channel Christmas Movie Wonderthon,” will parody holiday romantic comedies with a cast of 23 actors whose characters converge on the small town of Hopewood Falls, Vermont, looking for love in ugly sweaters.

A sugar rush of six Christmas movies at once, the show features a prince or two in disguise, an unconscious veterinarian, a sassy, red-haired best friend, a snobby princess, a Christmas tree farm and charming inn at risk of destruction by evil city slickers and a Christmas parade with a Santa dilemma. And that’s just the half of it.

“I think audience members will enjoy watching something goofy and silly and completely put together by amazing students,” Michels said. “And since it is a spoof on holiday Hallmark movies, they will get a good laugh at the absurdity of the situations in the show.”

STUDENT DIRECTORS GET THEIR CHANCE

According to Michels, she chooses one play each year to be directed by students, and this show is helmed by Joshua Newman and Henry Mattson. The seniors have appeared in a total of 12 shows through the school drama department and snagged the co-director positions after going through an interview process.

“They are both very talented actors,” Michels said, “and have great ideas as directors.”

Due to a lack of male cast members, both directors also have roles in the play, and Mattson has been surprised by how other directors can make the job look easy when he’s found that it’s not.

“There are many responsibilities that you don’t normally deal with just as part of the cast or crew,” he said. “Even though there are two of us, it’s not as easy as it seems to be.”

Newman said he was surprised by how fun the director job is.

Practices for the cast began in the third week of the school year, with uncertainty as to what kind of performances would be allowed due to pandemic restrictions.

“After we had to cancel our musical last spring,” Michels said, “the kids were so devastated. I think that has motivated them to adhere to our strict safety guidelines because they need the social interaction with their peers and they really want to put on a show.”

As production manager, Michels came up with a safety plan that includes sanitizing schedules, social distancing guidelines and mask requirements. Actors have utilized plastic face shields so their expressions can be clearly seen.

“We have also encouraged the cast members to limit exposure to people outside of our cast for the duration of the show to minimize the risk for quarantine situations,” she said.

Even with a plan in place, Michels said the biggest challenge the troupe has faced is incorporating quarantined students into practices.

“Quarantined cast members join rehearsals via Google Meet,” she said. “and it can be challenging to create a good flow during rehearsal when there’s the internet lag and the person can’t physically be on the stage.”

THE SHOW WILL GO ON

Finding it difficult to rehearse via the internet helped Michels make the decision to livestream the show from the high school’s auditorium rather than offer it as a “virtual play” with actors recording their parts from separate locations.

“We received guidance that if we were going to perform together in person, we would not be able to have an audience in the room,” she said. “So our choices were livestream or put on a virtual play – the latter of which I wanted to avoid if at all possible because the students really need to be together.”

So in its three performances, actors will be together on stage – in a comedy with no audience to laugh at the jokes. Michels said all is not lost, however.

“There is actually some ‘audience participation’ in this show,” she said. “We have navigated it by adding appropriate sound effects at the points where the audience should interact, so we are hoping that the audience at home will interact even though they aren’t in the room with us.”

That wish to keep things as interactive and normal as other non-COVID performances comes directly from Michels’ heart.

“I have noticed throughout my years directing that students who repeatedly participate in theatre feel lost when they aren’t part of a show,” she said. “Theatre becomes our entire lives. We live it and breathe it, so any chance we can have to participate in it, we will do whatever it takes to make it happen – even if whatever it takes includes sanitizing every time they leave the stage, wiping down props and mics after touching them, as well as many other precautions.”

HOW TO SEE THE SHOW

To watch the free performances of “The Holiday Channel Christmas Movie Wonderthon,” visit the Facebook page “North Branch High School Theatre,” and click on the link in the Facebook Event, which will be posted beginning Nov. 20.

A link will also be posted at the Google site: https://sites.google.com/view/nbahstheatre/fall-play.

Although all performances are free, donations can be made to the theatre department by writing a check to “ISD138” with “theatre” in the memo line, and mailing it to the Activities Office at North Branch Area High School, 38175 Grand Avenue, North Branch MN 55056.