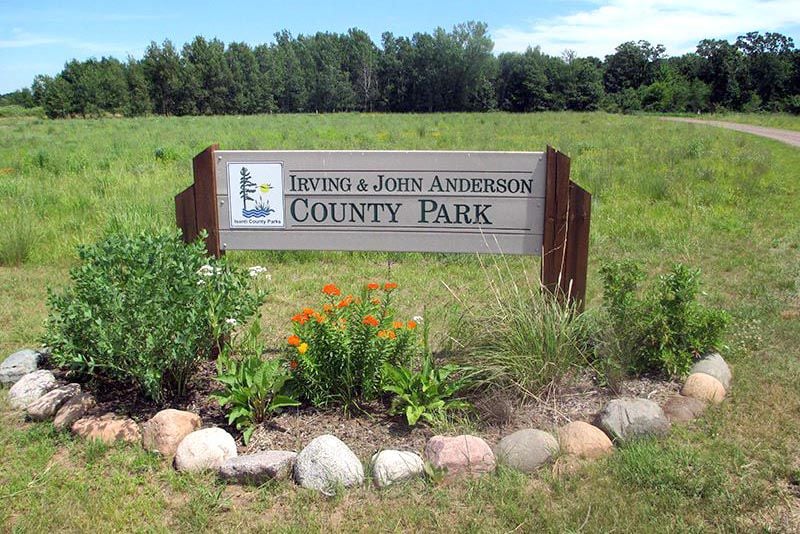 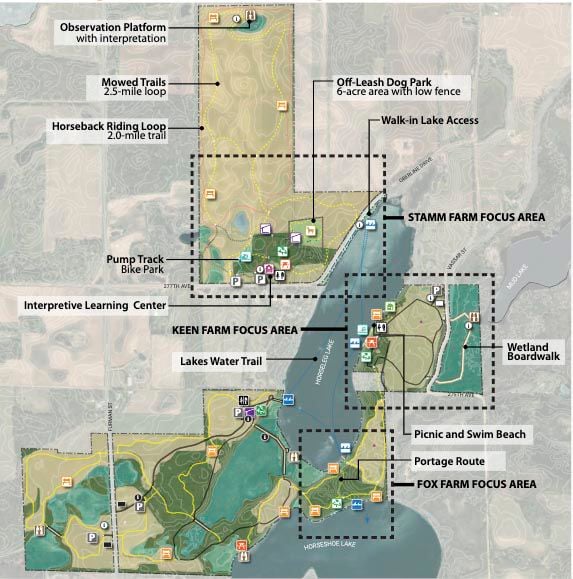 This site plan includes many of the features proposed in the newly updated master plan for Irving & John Anderson County Park including new trails, an observation platform, a learning center, dog park and a picnic and swim beach.

This site plan includes many of the features proposed in the newly updated master plan for Irving & John Anderson County Park including new trails, an observation platform, a learning center, dog park and a picnic and swim beach.

The transformation from farm to thriving natural ecosystem at Irving and John Anderson Park in Isanti County has been taking place since the park was born.

Acquired by the county in 2007, the land started off as a 174-acre park at 27241 Furman Street NE, North Branch. A master plan was created in 2013 to guide the future of the park, but with the addition of 226 more acres, an updated master plan was required.

Jody Rader, of Hoisington Koegler Group, was contracted to assist with the update and presented it at the Dec. 18 Isanti County Board meeting, where it was approved.

“The best features that people really love today,” she said, “are the wildlife viewing, natural play area, the shelter, boardwalks, trails. People really like the sort of natural feeling of the park.”

She said the new plan will continue to preserve the things people love about the space, as well as address the development of recreational opportunities, access to Horseshoe and Horseleg lakes, the creation of interpretive and educational features, the restoration of natural and ecological habitat and the creation of a trail network.

Trail to a new plan

“There was a pretty robust engagement process,” said Rader, of updating the master plan, which began in March 2019 with information gathering from the public and various park stakeholders. The development of a site design concept took place from May to September, and the master plan document was updated September through November.

Information was gathered through letters sent to residents living near the park, an online survey, through various pop-up events at local community events.

The preliminary plan for the park was shared with the public at the Isanti County Fair, and a draft concept was shared at the North Branch Fall Festival. Comments regarding the plan were also gathered through email and the Friends of Anderson Park group.

Goals that were developed during the 2013 master plan served as guidance during the update, have been refined and will continue to guide Isanti County Parks as the plan is implemented during the next 10 years.

- continuing to protect and restore high-quality habitat and natural resources;

- increasing publicity and the number of visitors who frequent Anderson Park;

- increasing the quality and variety of recreational opportunities;

- making Anderson Park enjoyable and accessible for people of all ages and capabilities; and

- expanding educational opportunities throughout the park.

Implementation of the new plan

“You can see mostly what we are focusing on are those new acquisition areas,” Rader said of the new master plan, noting that Fox Farm near the southern end of the park did not have as many future development opportunities, and accessibility was an issue.

Improvements in the Keen Farm area would take place along the lake with a boardwalk through the wetland, she added.

Stamm Farm is where most of the new activity and development would take place, Rader informed the board, noting much of Stamm Farm is former cropland that has not yet been restored to natural habitat.

“We would like to add some of the more active recreation opportunities in this area,” Rader said, “because this is an opportunity to take advantage of an area that’s not so naturalized yet.”

She said the plan seeks to incorporate restoration of natural lands throughout the park, but also incorporate a number of horseback-riding and hiking trails with some gravel surface trails which  will be ADA-accessible and closer to the parking areas.

Not only will the updated master plan guide development of the physical attributes of the park, it serves to guide financial aspects as well.

Serving as a foundation for future grant writing, fundraising and project implementation, the master plan also ensures that the park is meeting Greater Minnesota Regional Parks and Trails Commission requirements for designation as a regional park, according to Rader.

Vision is for variety of people

The vision for the master plan is that the stewards of Anderson Park will continue to preserve the ecological integrity of the park, restore its native habitats and connect people with the natural world through innovative outdoor experiences.

“It’s pretty breath-taking, isn’t it?” said Marcia Kingsbury, who lives near the park and attended the board meeting. Her husband, Lee, is on the Isanti Parks and Recreation Commission.

“Twelve years ago when we had our first community meetings about the potential of this park,” she said, “we never ever would have imagined that at this fast pace we would be talking about these kinds of things. They were dreams. ... I live very close to the park, so I’m there fairly often with my dog and friends. I’m amazed at the increasing number of people and kinds of groups that I see at the park. When you look at the variety of activities that were just designed and the potential use of the park, it’s reflective of a whole variety of people.”