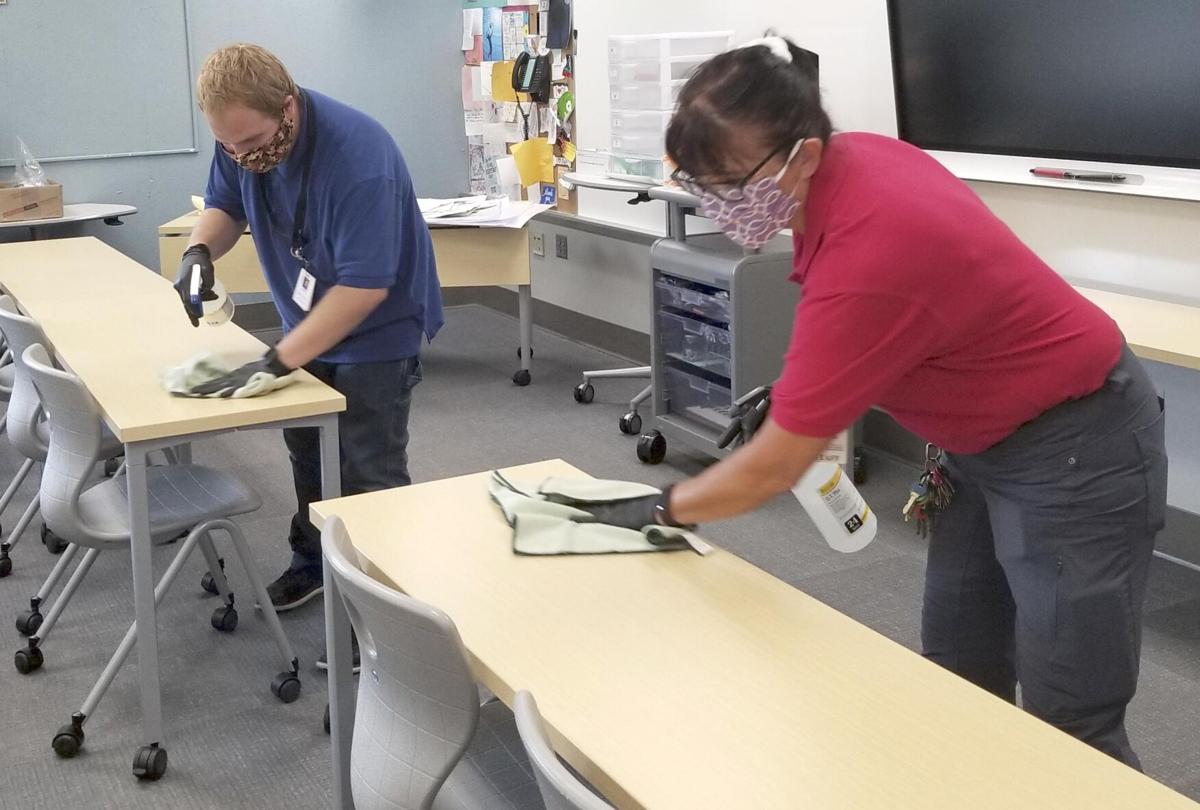 North Branch Schools custodians Jusin Sletten and Cindy Regnier clean and disinfect tables in one of the classrooms in anticipation for the first day of school, which will be on Tuesday, Sept. 8. Despite the stringent COVID guidelines set forth by the Minnesota Department of Education, North Branch Area Schools is one of only a handful of districts who have figured out a way to have five-day in-person classes in every grade level.

A semi truck filled with desks, tables and chairs gets unloaded into the vacant space at North Branch Outlets that will be utilized by the school district this year.

North Branch Schools custodians Jusin Sletten and Cindy Regnier clean and disinfect tables in one of the classrooms in anticipation for the first day of school, which will be on Tuesday, Sept. 8. Despite the stringent COVID guidelines set forth by the Minnesota Department of Education, North Branch Area Schools is one of only a handful of districts who have figured out a way to have five-day in-person classes in every grade level.

A semi truck filled with desks, tables and chairs gets unloaded into the vacant space at North Branch Outlets that will be utilized by the school district this year.

Back when North Branch voters approved the school district’s bond referendum to remodel and expand most of their school buildings, nobody had a clue how much that decision would pay off so quickly. The now-completed construction projects have gone a long way towards allowing the district to maintain five day in-person learning amid the extreme COVID-related health and safety restrictions. But at the same time, the district felt they needed even more space to allow for maximum flexibility for students, parents, and even the district itself.

At the beginning of the process for figuring out their “Return to Learn” plans for the 2020-2021 school year, Superintendent Sara Paul said parents overwhelmingly stated their desire to have students be taught in person as much as possible. At the same time, however, the district needed to consider the apprehensions of sending kids back to school safely, plus mandates by the state to offer the option of some sort of internet-based instruction. Add in the obvious obstacle of a lack of high-speed internet connections for a good portion of the district, and the big question was how to marry all of this together in order to give all students a high-quality education. The answer, as it turned out, was right under their noses in the form of the North Branch Outlets Mall.

“I’m new to the area, and you see assets in front of you that maybe  you don’t see if you’re not new,” said Paul in explaining how the idea came about to approach the half-vacant retail center about renting some of their space for some form of classroom space. “It’s been pounded into us from the time the initial guidance came out that space was going to be critical to your planning. So it’s hard to not literally trip over it every day going from my house to work and not say ‘I wonder what they’re doing with that space?’ It really wasn’t anything profound more than just starting to ask some questions.”

Paul admitted, however, that some of the answers she was given was a real eye-opener.

“That was a real big ask,” Paul said, referring to approaching the owners of the mall. “What I didn’t realize right off the bat is that it is not common to do a year lease in a retail space. It puts on hold a lot of the potential development here.”

Luckily, the owners were receptive to the idea of temporarily transforming a total of six units for the district to use.

“This city is really doing all they can to make this a viable community,” Paul continued. “I was told we got a very, very, very fair rate for the quality of space we’re getting.”

Even after reaching an agreement, however, there was several hurdles to be crossed. Many of the building codes are completely different between retail space and educational space. So a litany of inspectors were called in to make sure everything was up to code. In addition, the district needed the city to grant a conditional use permit to use the space for something other than retail, which was just granted during the Aug. 25 city council meeting.

“It’s a good thing we got started on this when we did (back in June),” added Community Relations Coordinator Patrick Tepoorten, “because of all the processes that needed to take place.”

What to do with the space?

Once an agreement was made and it was confirmed the Minnesota Department of Education’s guidelines would even allow for anything other than complete distance learning, the question became what to use the space for.

“We have had some really thoughtful conversations about what this could be used for,” Paul said. “We explored a lot of different options, even moving a grade level over here at the beginning of the year. But our founding principle was flexibility and choice, so why make that decision for families in this time of uncertainty when we can design it around people making decisions for themselves?”

Ultimately, the decision was made to use one space for the district’s Norse Area Learning Center. Plus, two of the spaces would be for the newly-formed Distance Learning Academy, which is available for any families who prefer to continue on with a distance learning curriculum. It is in those two spaces where the district’s emphasis on flexibility really takes shape, creating their own version of “hybrid” classrooms. The staff of Distance Learning Academy will be based there, offering structured schedule times for students to come and receive some in-person support. Additionally, there will be flexible times for them to come in for even something like using WiFi.

“Being able to come here is so much better than say sitting in their car out in the parking lot of the high school just to get a WiFi signal,” Tepoorten said.

“By doing it this way, this idea is becoming way better, because of what they are saying they need,” added Paul.

As for the other half of the rented space, Paul said that is being saved for any sort of contingency plan that may need to be implemented.

“If we need to move to “level four” on our flexible learning continuum, for us to have the flexibility in order to proactively adjust in case we have to spread students out even more, we want to keep kids in school, and this gives us the ability for parents to know we are taking care of it.”

Although much of the plans are being finalized, including having students come in and put their own personalized touches to the spaces, Paul said that nothing is set in stone. There will definitely be changes made based on observations and feedback from staff, students, and parents. To that extent, Paul said she has a completely open-door policy for parents to provide their questions or concerns.

“It’s like the biggest gift when people ask questions,” Paul said. “It’s so helpful. It’s going to continue that we have a readiness to listen to what is working and what else we can do.”

“We found their responses extremely instructive for how to move forward,” added Tepoorten in referencing the initial reactions to the district’s plans. “That’s what all districts have to be about right now. How do we meet families on their terms so that they can feel comfortable sending their kids to school?”

Paul concluded by offering to take any and all questions or concerns from parents. She said she can be reached at 651-674-1000 or spaul@isd138.org.