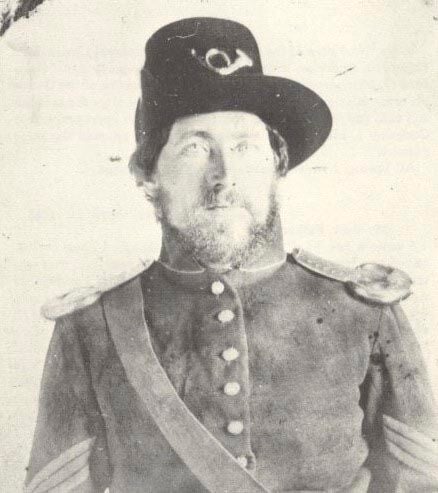 Olaf Liliegren in his Union uniform. 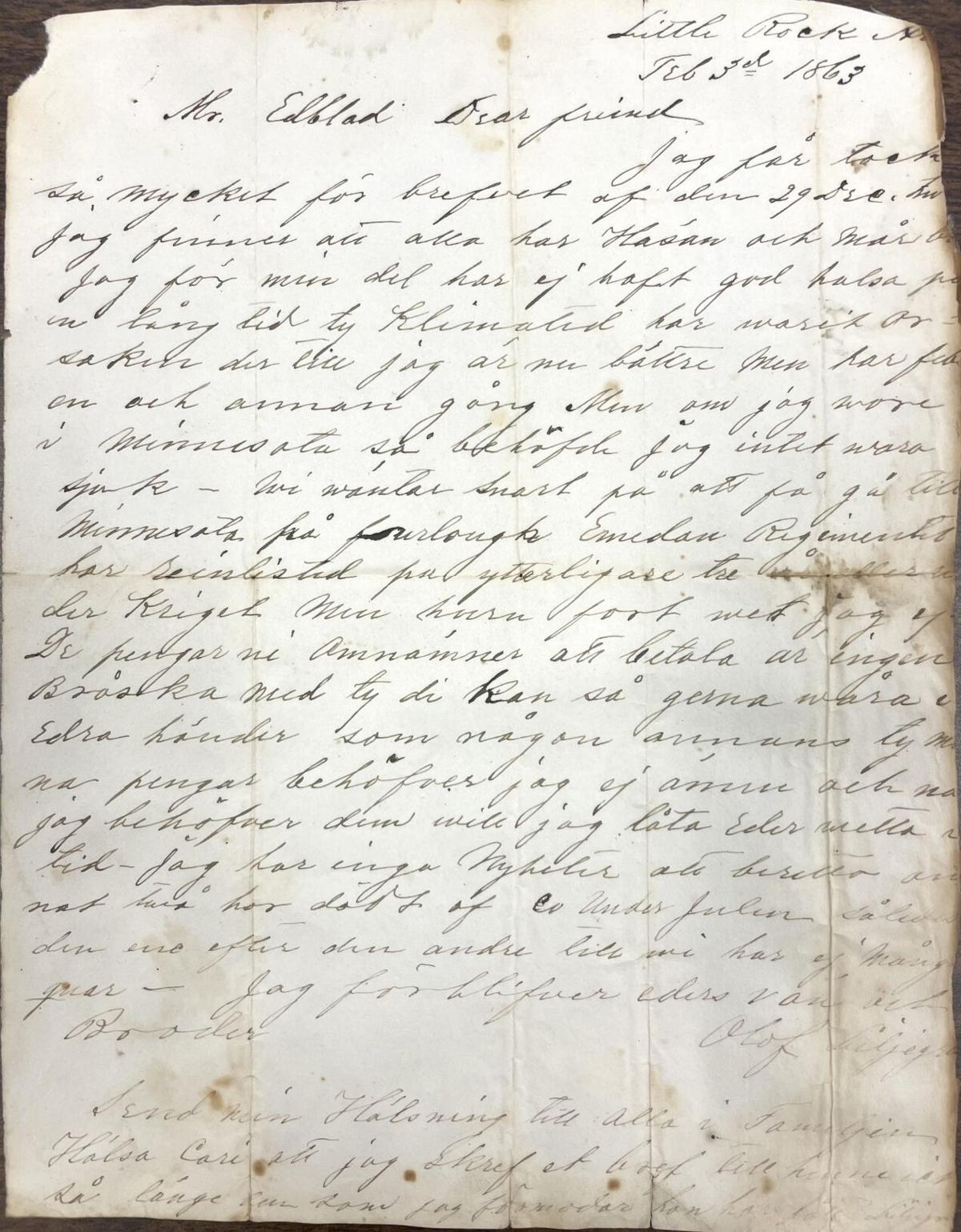 A copy of one of the original letters written in Swedish by Olaf Liliegren.

Olaf Liliegren in his Union uniform.

A copy of one of the original letters written in Swedish by Olaf Liliegren.

Editor’s note: This month’s “Repeating History” features letters written during the Civil War that may contain language with ethnic and racial prejudices that were once common but are no longer acceptable in today’s society. They are being presented unedited as they were translated in their entirety from Swedish.

Olaf Liljegren was born in Sweden in 1830 and immigrated to Minnesota around 1858. Although residing in both Washington and Chisago Counties before the war, he claimed Cambridge as his home. Olaf had ties to many families in the area, notably the Edblads of Cambridge Township. His connection to both Isanti County and the Edblads is not entirely clear, but it’s believed that Olaf’s family knew the Edblads before leaving Sweden and traveled with them on the way to Chisago and Isanti Counties. Some evidence from written correspondence and oral history indicates Olaf and a young pioneer woman named Mary Edblad had a romantic connection as well. Hints to this relationship are evident in some of Mary’s writings throughout her life.  Whatever his connection truly was to Isanti County, there is written correspondence indicating his devotion to the Edblads and the Cambridge area. In his letters, he often refers to, “coming home to Cambridge” after the war.

Olaf enlisted with the 3rd Minnesota Volunteer Regiment at Fort Snelling in 1861. Olaf quickly excelled through the ranks to become a lieutenant in the predominantly Scandinavian, Company D. Seeing service throughout the South, Lieutenant Liljegren saw action at the pivotal siege of Vicksburg, Mississippi; Murfreesboro, Tennessee; and Corinth, Mississippi. A remarkable and unforeseen series of events on the Minnesota frontier eventually found Company D headed home to defend against the Sioux Uprising of 1862. Taking part in the Wood-Lake Battle in Yellow Medicine County, Lieutenant Liljegren helped area settlers to safety and fought several skirmishes against the Sioux.

Lieutenant Liljegren made a return trip to Minnesota during a furlough in February of 1864. He stayed with the Edblad family at their log home along the banks of the Rum River just north of Cambridge, and in one of his letters upon returning to Little Rock, Arkansas thanks them for their hospitality. In the letter, Olaf also sent his well wishes to the Congers, Norelius’, Hoffs, and “all the Swedes around there.”

Throughout Lietentant Liljegren’s service, he wrote letters (in Swedish) to his father who still resided in Sweden. In those letters, he described his experiences on the battlefield as well as daily life as a Union soldier. An equal amount of written correspondence was sent to the Edblads, particularly Mary Edblad. The letters to the Edblads were written in both English (to Mary) and Swedish (to Mary’s father, Isak) and generally consisted of inquires of Cambridge and the surrounding areas. Although many letters contained minimal punctuation and mis-spellings, Olaf’s bi-lingual writing capabilities are impressive.

Sadly Olaf Liljegren never returned home from his service during the Civil War. His last letter was sent on May 1, 1864, addressed to Mary. Lieutenant Olaf Liljegren contracted malaria and died on September 24, 1864, in Pine Bluff, Arkansas. He is buried at Little Rock National Cemetery in Little Rock, Arkansas.

I am very thankful for your letter the 25 ult. I should have answered it before but somehow had no time Our first regiment orders to go to Camden some 170 miles from little Rock we stated as far as this place and waited untile we heard about Steeles with his forces had driven back by the rebels and our going out there deemed un-necessary. We were going to guard a trail of suplise for Steels Army one was sent out previously consisting off about 200 wagons and mules (6 mules for each wagon) which was unfortunately Captured by the rebels and destroyed and the forces with it fought well but was overpowered by emense odds.

General Steele was fighting yesterday about 30 miles from here. We could hear the cannon and wished to there to render them some assistance but in vain we got no order to go. General Steele was fighting against immense odds, but whipped the rebs, took several pieces of artillery, though lost some of his wagons. He is pulling back to Little Rock and expects the rebs will follow him but I don’t belief they will come tonight, it arrived a ambulans train with about 120 wounded among them were some negro soldiers which fought in the engagement desperately and showed no mercy to the rebs. All the reports can not be fully credited yet, it’s too many.

You will excuse my poor writing my table is a boock on my knees. I should like to have a chat with you though you always appear to be so bashfull and I would give anything to hear Betsey laugh and say it. I hope you will give my best respect to her and to all I will always remember what fun I had and what a good time I made of my visit up there. I feel especially under obligation to you for your untiring devotion to my comfort and enjoyment. I felt sorry many times to make so much troubles and the whole family besides if I ever get back again I don’t want to bother you so much. I will close my writing tonight and wish you a sound hapy Sleep and a little softer bed to sleep in than I have. One blanket around me on the hard damp ground no tent and or Bagages left in Little Rock.

I am overcome with signs of love from you. I have been surprised with two letters which I must answer at once. The earlier I thought to answer when I got some peace and quiet, for up to now have been mostly on trips. But before this time came, I got, quite unexpectedly, a letter in  Memphis, on my journey from St.Paul to Little Rock in Arkansas (a chance meeting) and also one from S.K. Sw. written by Mr.Olson in [illegible]…well put together and one enclosed to Eric Bong. I am glad to hear that everyone is in good health and feels as fine as conditions allow. For my part, I am well. I am completely returned to health. I am also glad to hear the timber business is lively, rivers and streams are cleared. I would really like to be there and have a hand in it, but since you can’t be in more than one place at a time, I am content with being in this bloody drama of a war which is being played right here in America for people’s freedom. The rights of both the blacks and the whites are abused to the greatest degree, much more the formers, since it cannot be remembered otherwise. Every true freedom-loving person ought to consider it his highest duty to defend a people whose freedom has been crushed, the dearest [illegible]…he owns in life.

The original letters written in Swedish to Olaf’s father were translated by Alan Swanson and reprinted from The Swedish Pioneer Historical Society – 1980. All eighteen letters by Lieutenant Olaf Liljegren can be viewed at the Isanti County Historical Society.