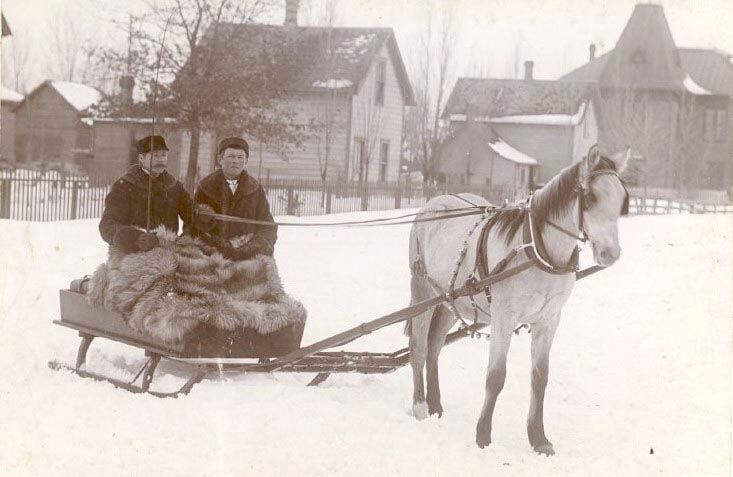 This photo was taken by Andrew Bogge in 1895. Note the historic Isanti County Courthouse building in the top right corner. 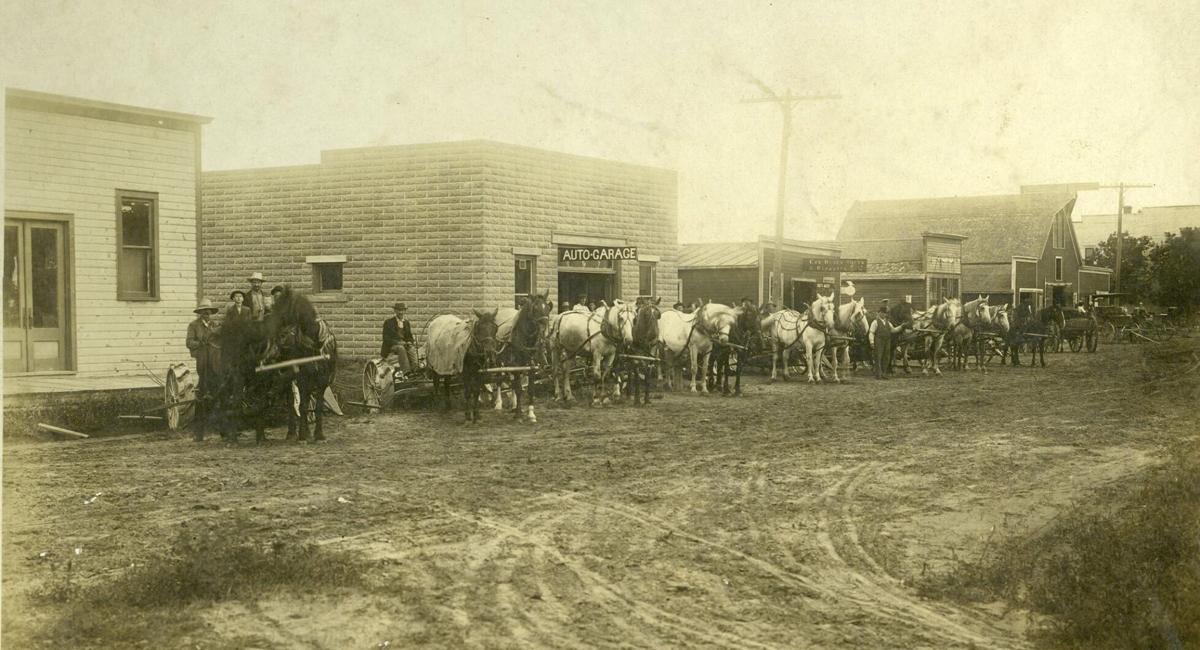 This photo of downtown Isanti was taken by Oscar Widmark in 1914. The building on the far right is where Creamery Crossings currently sits. 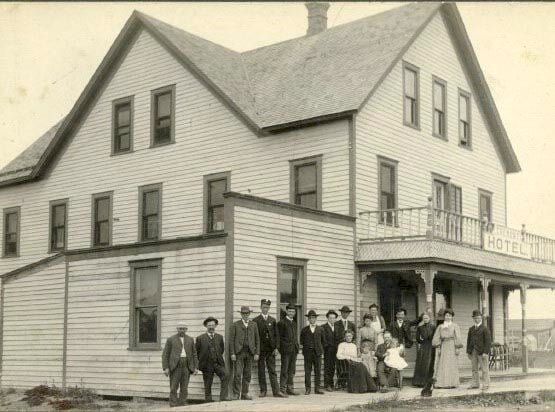 This photo of people gathered outside the Tremont Hotel in Braham was taken by the Seline Brothers Studio in 1905. 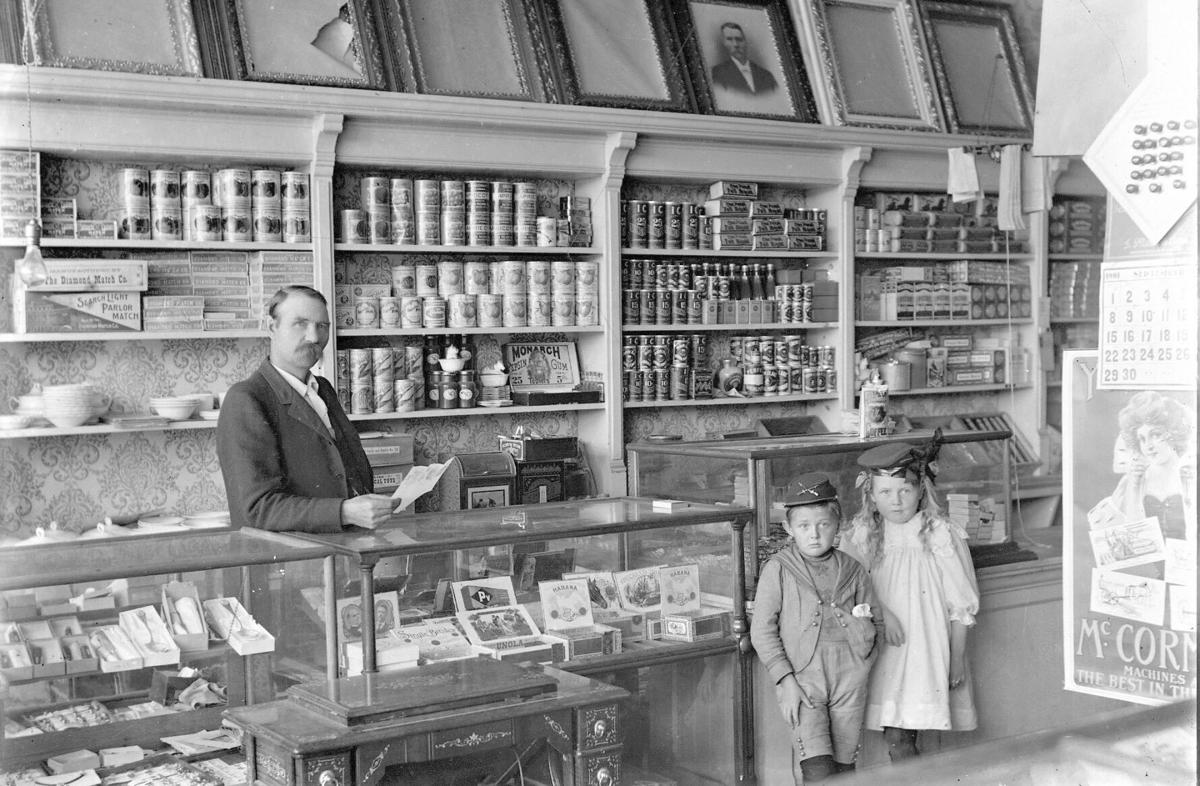 This photo inside an unidentified business was taken by L.M. Tunnell in 1901. 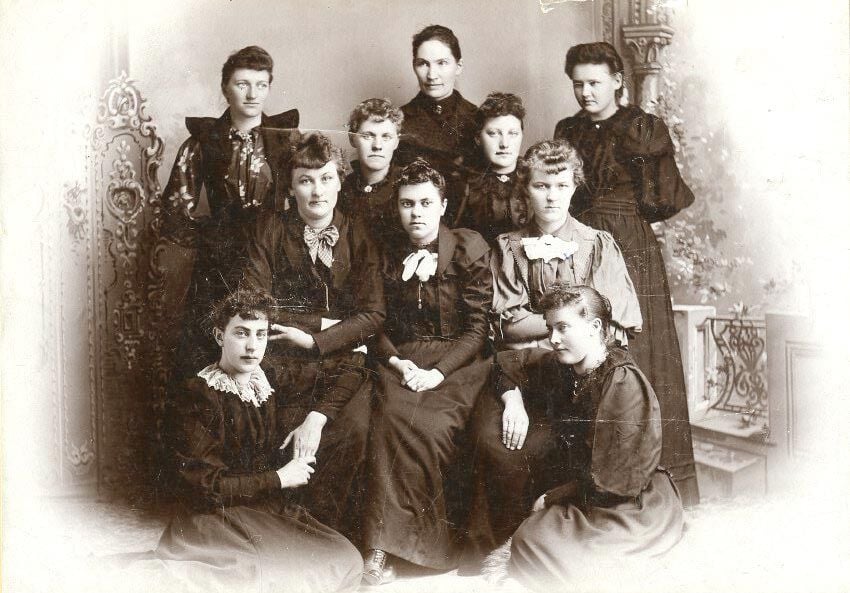 This family portrait, circa 1900, was taken by Flora Danielson, who appears to be the only female photographer from Isanti County’s early history.

This photo was taken by Andrew Bogge in 1895. Note the historic Isanti County Courthouse building in the top right corner.

This photo of downtown Isanti was taken by Oscar Widmark in 1914. The building on the far right is where Creamery Crossings currently sits.

This photo of people gathered outside the Tremont Hotel in Braham was taken by the Seline Brothers Studio in 1905.

This photo inside an unidentified business was taken by L.M. Tunnell in 1901.

This family portrait, circa 1900, was taken by Flora Danielson, who appears to be the only female photographer from Isanti County’s early history.

Since Isanti County’s founding in 1857, many area photographers have captured countless images of the landscape and its inhabitants. While there certainly were more contributors within Isanti County than this article reflects, it takes a brief look at some of the earliest and most well-known photographers and their work. Bogge, Stadin, Tunell, and Carlson have become household names during various points in history when discussing area photography. One of the first studios in Isanti County was opened by 29-year-old Andrew Bogge of Cambridge. Andrew was born in Sweden in 1861 and arrived in Cambridge around 1882. He started his business at his home on the northwest corner of Highway 95 and Birch Street North.

Bogge specialized in portraits and cabinet cards, but also took many photographs of area businesses. He began taking photographs in Isanti County around 1890. Many of the photos in Isanti County Historical Society’s (ICHS) collection contain images taken by Andrew Bogge. He continued to take photographs until selling his business to Daniel Stadin in 1902. Daniel Stadin, another Swede, worked out of Bogge’s home studio until 1907, at which point he had a building erected on the corner of Main Street and 3rd Avenue Southwest. His timing coming into the photography industry was perfect, as the population of Isanti County was fairly high and folks from all over wanted photographs taken. Stadin not only took photographs within his studio, but he also traveled around Isanti County taking images of rural life on the farm. He continued his work until selling his business to Nils Carlson in 1933.

Nils Carlson, after having worked around the Town of Isanti, eventually situated himself in the prominent brick building at 235 South Main Street in Cambridge (currently occupied by NorthStar Wealth Management) where he took thousands of photographs over 22 years. Many of Nils’ images continued the theme of people and places around Isanti County. Some of his more well-known images are those of early road construction, public gatherings, farm life, and elected officials. Nils remained at the Carlson studio until 1955. He then turned the business over to his nephew Roger. Roger Carlson, along with his son Steve (who took over ownership in 1990), undoubtedly contributed the most photos within Isanti County. Between Nils, Roger, and Steve, photos numbered in the tens of thousands from 1955-2013

Looking at the City of Isanti’s past brings us to John Wikstrom. John and his wife Kate operated a photography business mostly around the City of Isanti and locations such as Athens, Bradford, Isanti Township, and Bethel. In 1905, 19-year-old Peter Carlson from Sweden who studied and lived with the Wikstroms, eventually purchased the business. He only owned the studio for a short period of time before going to work with Stadin in Cambridge. Peter continued to serve areas of Isanti until 1920, at which point he moved his business to St. Paul. The quaint two-story home that was once a thriving studio still stands at 109 Main Street West in downtown Isanti, directly across from the Wooden Churn / Creamery Café. Interestingly enough, Peter and the aforementioned Nils were brothers - photographic talent obviously ran in the family.

Stanford Township in the southwest corner of Isanti County is the former home of area photographer Oscar Widmark. Oscar started his business out of a rented home in Stanford Township around 1904. He specialized in portraits and studio cabinet cards. Oscar took photographs in the areas of Stanford, Isanti, Bradford, Crown, and St. Francis. Oscar eventually purchased the Wikstrom Studio in Isanti where he continued his business until 1920.

L.M. Tunell worked primarily around central and eastern Isanti County. His main studio was located in Cambridge in what today is the current Cambridge Bar & Grill building. Tunell conducted business around Isanti County from 1895-1915, the images within ICHS’ archives are varied in subject matter and are incredibly well detailed. Based upon many of the images in the collection, Tunell seemed to gravitate around Skogman Lake, just east of Cambridge. In fact, the Tunell name can still be found in that part of the Isanti County today.

Readers might be sensing a theme as we look further into the county and its historic photographers. Many of the businesses started around the turn of the 20th century focused on commerce, industry, and people. Photographers made images both in the studio as well as offsite, and did so in the main areas of commerce within each town.

Readers may also note that a wide variety of locations throughout Isanti County were represented by many photographers. Continuing onto Braham, located just north of Cambridge, there is little known about the Seline Brothers Studio. Currently, ICHS has several images with their maker’s mark. Research of the Seline Brothers led to Alfred and Richard Seline. Both of their occupations were listed as “barber” in the 1900 census. However, a 1910 census reveals the Selines as “photographers.” Richard resided in northern Minnesota and Alfred, just north of Braham near Grasston. One of their more well-known images is that of the Tremont Hotel in Braham taken in 1905.

J.W. Rand conducted business around Cambridge and areas of Isanti County from 1890-1900. Rand took several images that have become quite familiar for many over the years. His popularized image of workers at the top of Cambridge Lutheran Church has been published in many books. Rand seemed to gravitate towards early threshing crews around the county as well. Several images in ICHS’ collection of Rand’s work include country schools too. Another popular image is that of the first steel bridge across the Rum River at Cambridge. It’s unclear if Rand had a formal studio in Isanti County or just traveled from his studio in Rush City.

Rounding out the list of Isanti County photographers ends with the only known woman photographer. Flora Danielson was active in Cambridge between 1890-1910.  There isn’t a lot of information on this particular photographer other than a couple of images within ICHS’ collection. There is no known studio on record as to where she conducted business, but Flora appeared to have taken both studio photographs as well as landscape images.

To learn more about past photographers of Isanti County or to see examples of their work, please feel free to stop by the Isanti County Historical Society and browse through hundreds of historic images.