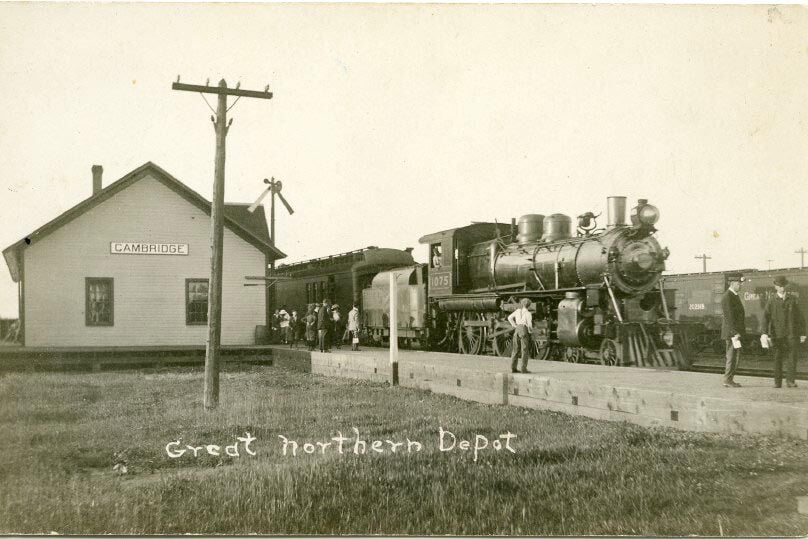 Trains pull into the Cambridge Station, circa 1900.

A photo from the Cambridge Depot, featuring a crowd gathering around Word War I soldiers on the train. 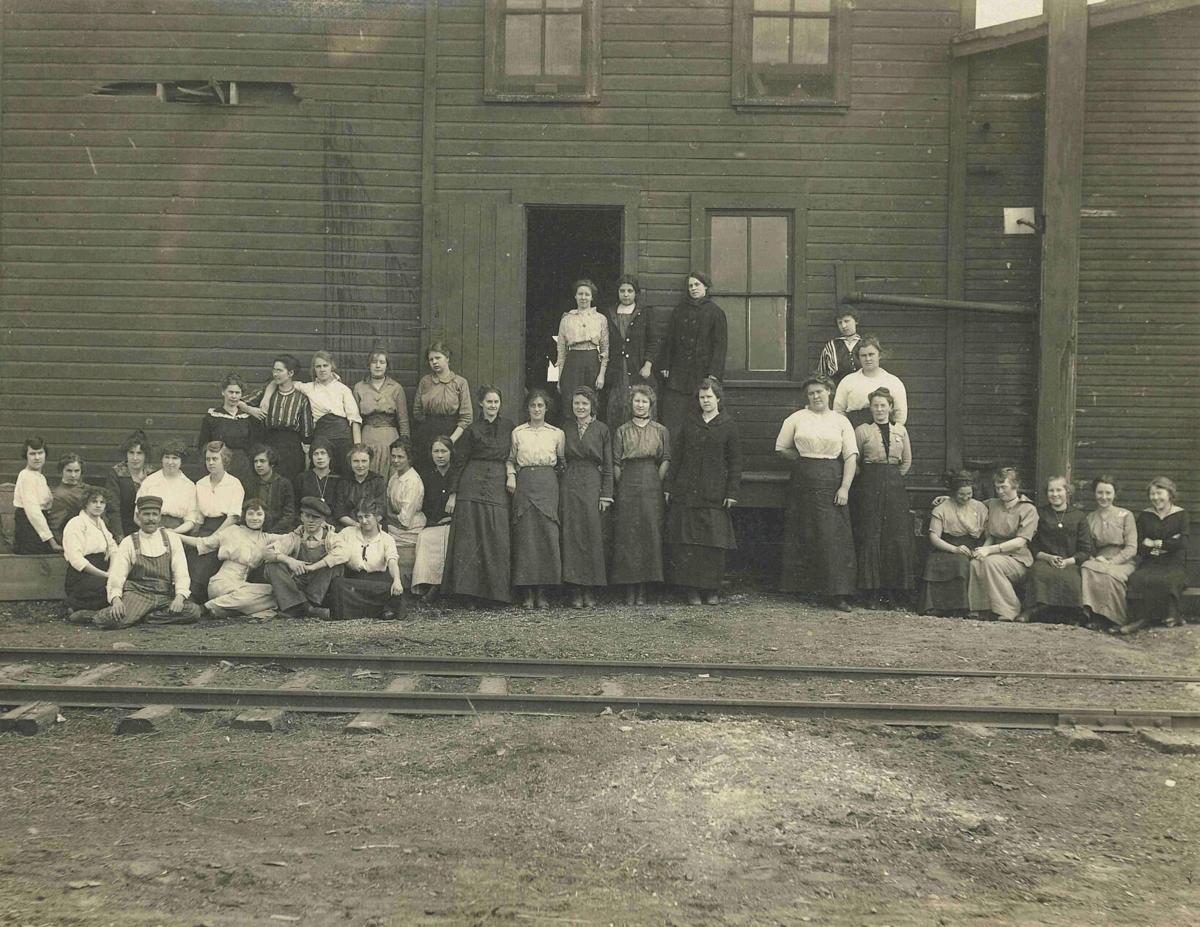 Businesses such as Sutter’s Navy Bean Company shown here began opening in the area right along the new railroad tracks as soon as they were constructed.

Trains pull into the Cambridge Station, circa 1900.

A photo from the Cambridge Depot, featuring a crowd gathering around Word War I soldiers on the train.

Businesses such as Sutter’s Navy Bean Company shown here began opening in the area right along the new railroad tracks as soon as they were constructed.

Summer 2021 marks the 122nd anniversary of the railroad’s arrival to Isanti County. When the first steam-powered train rolled through the county on June 30, 1899, it was a monumental affair. The iron horse had finally made it to growing Isanti County.

Before 1899 Isanti County was bookended by two railroads: Princeton to the west in Mille Lacs County, and North Branch to the East in Chisago County. The Skally line ran north out of St. Paul, through North Branch, Harris, and Rush City, eventually ending up in Duluth. Chisago County was fortunate enough to have the railroad as early as 1870. At that time, the population along the railroad warranted a direct line through those communities along the St. Croix River Valley. Cities such as Stillwater, Taylor’s Falls, and Rush City were established much earlier than cities in Isanti County. As the railroad steamed along the banks of the St. Croix, folks over in Isanti County had to patiently wait for its arrival.

Early attempts and lobbying for a rail line through Isanti County came as early as 1875. Many area businessmen, particularly in Cambridge, lobbied hard to the railroad companies and the State of Minnesota. Isanti County businesses felt like they were being left “high and dry” as most commerce was focused around the railroad. Plain and simple, Isanti County was being left out. Princeton and North Branch were reaping most of the economic benefits associated with the railroad throughout the region. Isanti County’s request was simple: build the railroad and prosperity would soon follow.

Prior to the railroad, settlers of Isanti County walked to either North Branch, Taylor’s Falls, Princeton, or Anoka for supplies and other necessities not available in early towns around Isanti County. Depending on the destination and particular need, the journey could take up to three days on foot. It wasn’t uncommon for early settlers to make the trek several times per year.

Even a local newspaper of the time would lament the fact that a railroad was needed. In November of 1878 the Isanti Press published an editorial stating that “Without railroad access, the inefficiency of long-distance travel will continue to have an economic impact.” It was clear to everyone around Isanti County that a rail was needed, but when?

A survey in 1881 looked promising for Isanti County when a proposed route ran from Sauk Rapids to Pine City. Unfortunately, however, when the final route was established it missed Isanti County completely. A few years later in 1886 found the rail line once again missing Isanti County, passing through Princeton to the West. As the population continued to expand around Isanti County particularly in the late 19th century, it was clear that a railroad was needed, but exactly ‘where’ was not yet determined.

The railroad once owned thousands of acres not only throughout the U.S. but in Isanti County as well. Most of the County’s odd-numbered sections were owned by the Lake Superior and Mississippi Railroad. They either bought up these large tracts, or they were given to them by the United States Government in the form of land grants. Railroad companies held on to these odd-numbered parcels in hopes of driving settlement to the area. Once the influx of settlers came into the county, the railroad finally started to offer up parcels around 1869. Interestingly enough, some railroad companies enticed certain populations from German and Scandinavian countries with the promise of affordable, productive land along a future railroad. As the railroad companies created a push for settlement, they quickly sold much of their land to speculators and other land companies.

In addition to owning the odd-numbered sections within Isanti County, the Lake Superior and Mississippi Railroad owned the lower quality swampland within the even-numbered sections. Only one-third of land within Isanti County was available for homesteading via the Homestead Act of 1862, the rest was locked up by railroad or speculators. Needless to say, the railroad had a lot of influence over the development and settlement of Isanti County in the mid-late 19th Century.

Another attempt in 1892 was on track, but due to the economic scare of 1893, investors of the Cambridge, Minneapolis, and Duluth Railroad reeled back their collective efforts.

Finally, enough lobbying would pay off and it was decided that a railroad would run through Isanti County. Work began and tracks were laid along the Great Northern Railroad’s “Bee Line” at a rapid pace, spanning the length of the county, north to south. Upon its completion in June of 1899, the first pass through the county brought people far and wide to see it arrive in Cambridge. The much-needed railroad put not only Isanti County on the map, but several towns as well. Towns such as Braham and Grandy were born along the tracks in 1899. In fact, upon confirmation of the railroad’s location, Isanti relocated to its present location along the line, as did the town of Stanchfield.  These new towns along the new railroad were then ideally spaced as early steam-powered trains required frequent water stops.

In most of the railroad towns, commerce was centralized along the rail; warehouses and businesses lined the tracks. The growth of these towns continued to elevate well into the early 20th Century. Land sales and immigration were booming; life was good, but it wasn’t only businesses that benefited from the railroad. Members of the community could now travel to Duluth, Minneapolis, and beyond in just a matter of hours instead of days. Mail could be delivered much faster; travel took a fraction of the time; people were getting connected on a whole new level. Today the rail line is used exclusively for the transportation of goods. Occasionally, a steam-powered relic can be seen chugging along the Great Northern Railroad to remind people of the significance and impact the locomotive made on Isanti County