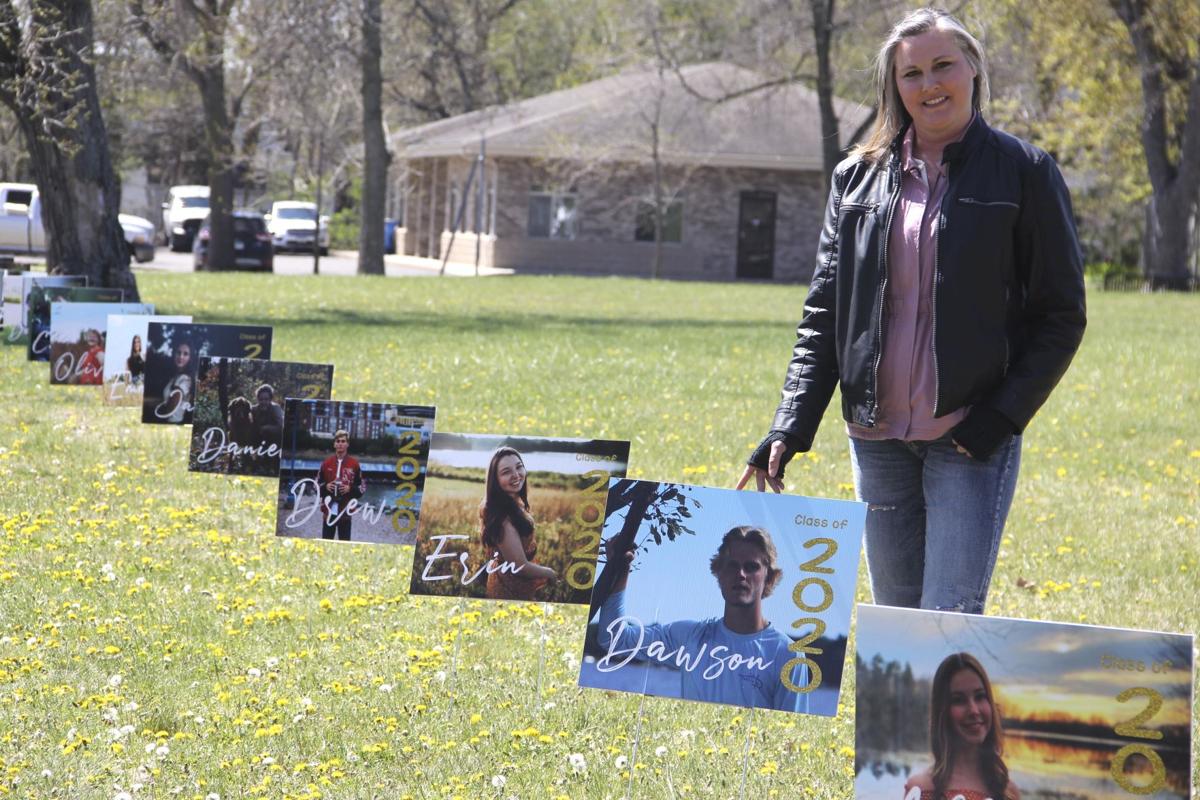 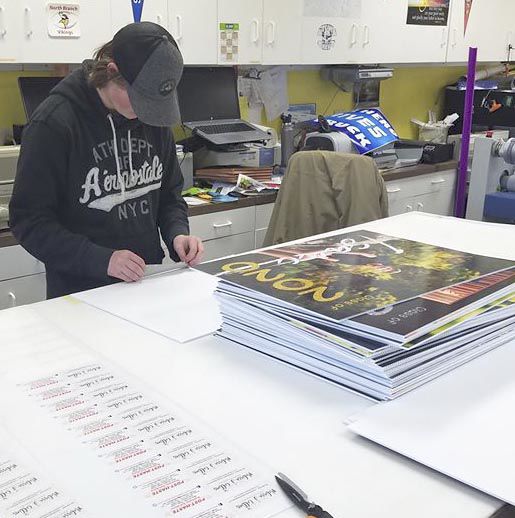 “I was laying in bed when all this was happening and realized this wasn’t going to be a quick two-week thing,” said Melissa Collins, owner of MJ Collins Photography. “I was trying to think about what skills I had so that I could do something, anything.”

Collins, who has a child in high school and two already graduated, focused her energies on finding a way to bring recognition and joy to high school seniors who have been denied the milestones of their final months at North Branch Area High School.

“I felt so bad for these seniors because everything came to an abrupt halt,” she said. “They went on spring break thinking they were going to come back and they didn’t. Now they’re finding out they may not be able to graduate in a ceremony.”

Collins decided to put her skills in photography and graphic design to use by creating full color 18” x 24” yard signs to honor individual seniors.

She said she’d seen signs in other communities with a generic “Congratulations Class of 2020” and felt they deserved something more personal.

“I wanted to add their faces and their names,” she said, “because they’re an individual person who had individual goals and plans and thoughts for their last few months. If we’re going to honor our seniors, let’s honor each individual person.”

Once Collins decided on creating signs, she knew she needed a top-notch printer and contacted John Dolin, owner of Post Haste Business Solutions in North Branch, who had provided her photography business with printing services since 2017.

“He was the first person that popped into my mind to help out,” she said, “and he rose to the occasion.”

Knowing the quality of signs was under control, Collins considered where signs should go. Her initial idea was to create a “senior walk” – in lieu of walking in a commencement ceremony, students could walk around a circuit of signs and see the faces of their friends and take pictures. Her first choice was Central Park on Main Street.

“While the city was really phenomenal and supportive with the idea,” she said, “it had to go through all their committees, which meant that this might not have happened until after graduation.”

Plan B was to contact Steve Martens, owner of the block-size grassy lot at 6644 Main Street, former site of the elementary school. He gave permission, and the location fortunately allows for cars to drive around three sides of the block to view the signs.

With a printer and permissions in place, Collins put an inquiry out on the North Branch Bulletin Board Facebook page in late April to gauge community interest.

“People jumped on it really fast,” she said, noting her initial post there and on her personal and business pages had almost 100 shares the first weekend. “I was like, ‘Woah, I wasn’t ready for all of this excitement!’ So I didn’t have all of my duckies in a row.”

She scrambled for a few days to develop an organized plan for how people could contact her, send their digital photos and make payment of the $20 that each sign cost to produce. She settled on using her Big Cartel online store to process payment – and was surprised when people wanted to donate to the cause without receiving a sign.

“I wasn’t prepared for that,” Collins said. “But I have a few people coming through now going, ‘I want a sign, but we can’t afford it,’ and I’m like, ‘I got the funds because of our wonderful community!’ It’s amazing to me how our community pulls through when times are tough.”

Once orders started rolling in, Collins estimates she spent eight hours a day, seven days a week for the past three or four weeks to bring her vision to completion. She communicated with families via email, text, Messenger and phone calls to take orders, secure digital photos big enough to enlarge, design each sign in Photoshop, answer questions and keep families and the community updated on progress. She even took photos of six seniors whose submitted photos didn’t work out.

“The challenge was to stay organized,” Collins said. “I was deathly afraid of missing a sign or misspelling a name. I just prayed every time they were printed and before they were put out that I had done it right.”

In addition to Collins’ efforts, Dolin said his shop spent about 60 hours printing the 115 signs that have been created to date.

“Melissa did the hard work with the design,” he said, “and my designer just had to basically do the final setup for our print process.”

When Collins decided she wanted the signs to go up on May 9 for Mother’s Day weekend rather than later, Dolin went into work on his day off to complete the last signs with Collins’ son volunteering alongside him. They also helped place the signs that Saturday as cars began circling the block.

“I put a little Facebook message out saying, ‘I’m on my way. We’re putting them up!’” Collins said. “And people were already coming by, and everyone was crying. Dads were crying; moms were crying. Seniors were crying.”

A woman driving through North Branch on her way to visit relatives in Lindstrom stopped to chat as Collins put out signs. “We don’t even live here,” the woman said, “but I had to stop and take a picture because this is amazing.” KARE 11 News also featured a video of the display.

IDEA IS A SUCCESS

The response is beyond anything Collins or Dolin could have imagined.

“Everybody has been thanking me,” Collins said. “I’ve gotten emails from parents that they appreciate this. I’ve gotten flowers … I’ve gotten thank you notes from the seniors themselves. They’re saying, ‘You have no idea how much this means to us.’”

Senior Sydney Webb speaks for her classmates when she said, “We’ve had to give up a lot of the memories we were supposed to make at the end of our senior year, but the incredible amount of support and love shown by our community through these signs is a memory I’ll never forget.”

Senior Olivia Greene agrees. “I think the businesses doing this for us was amazing,” she said. “It is a hard situation for all of us, but it was great to see our class together like that.”

Dolin hears the same positive feedback. “I get people walking in every day saying, ‘Thank you for doing that,’” he said. “It’s so nice that they all appreciate it, and they feel for the kids as well.”

He said he’s also printed graduation signs for Rush City, and his phone is “ringing off the hook” with requests from other school districts seeking quotes on sign orders.

The signs will remain up through Sunday, May 24, and then they’ll be given to the families who purchased them, with time to display them at home through the summer.

But Collins said she’ll continue to take orders for signs for North Branch seniors as long as people want them.

“If these can make the town feel better and the seniors feel better for even that small moment – “ she said, “if something as small as a sign can do that – then it fills up their cheer tank and it fills mine. And it’s a win-win.”

To order a senior sign email mjcollinsphotography@gmail.com or call 651-238-0652.