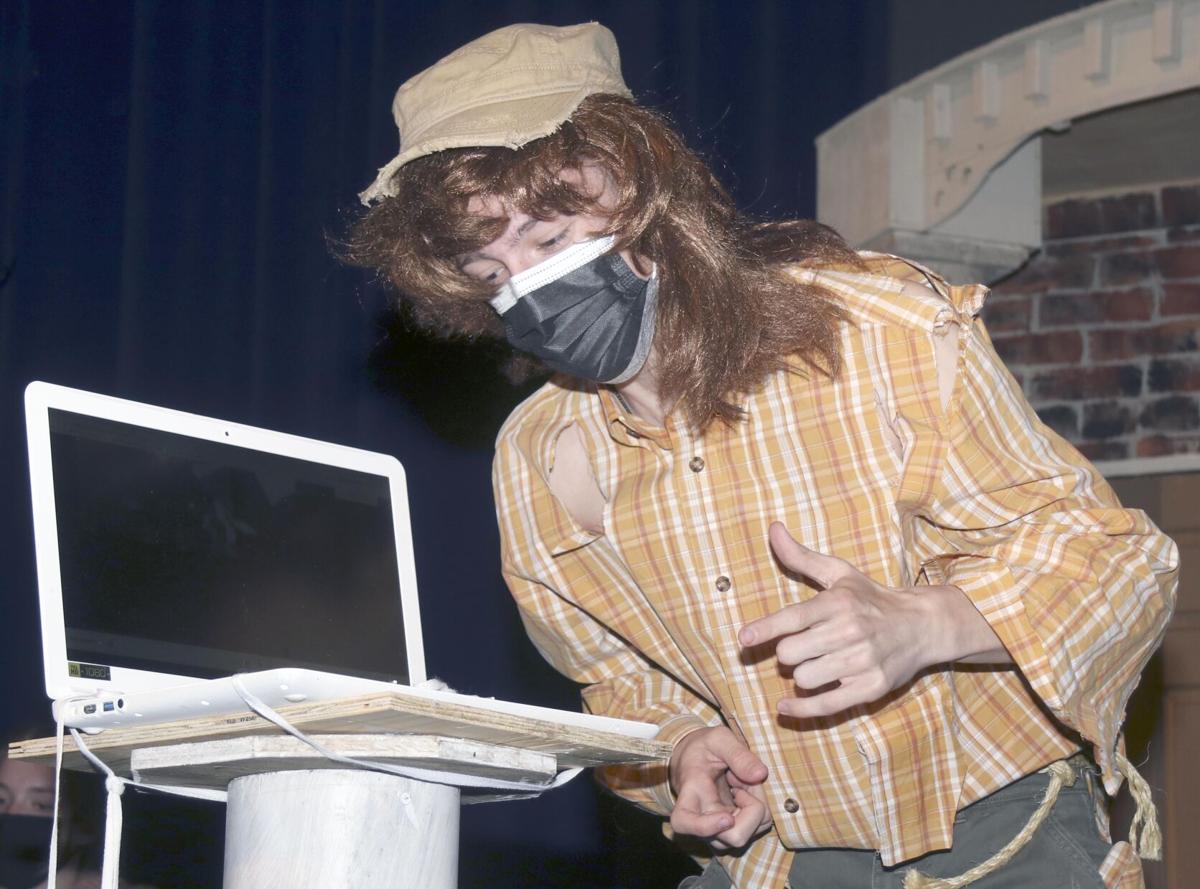 Actors in quarantine have caused the Cambridge-Isanti High School Theatre Department to get creative during rehearsals of their spring play performance of “Auntie Mame,” including having Evan Goebel (pictured here portraying Emory MacDougal) and the rest of the cast interact with other actors via a Chromebook on wheels. 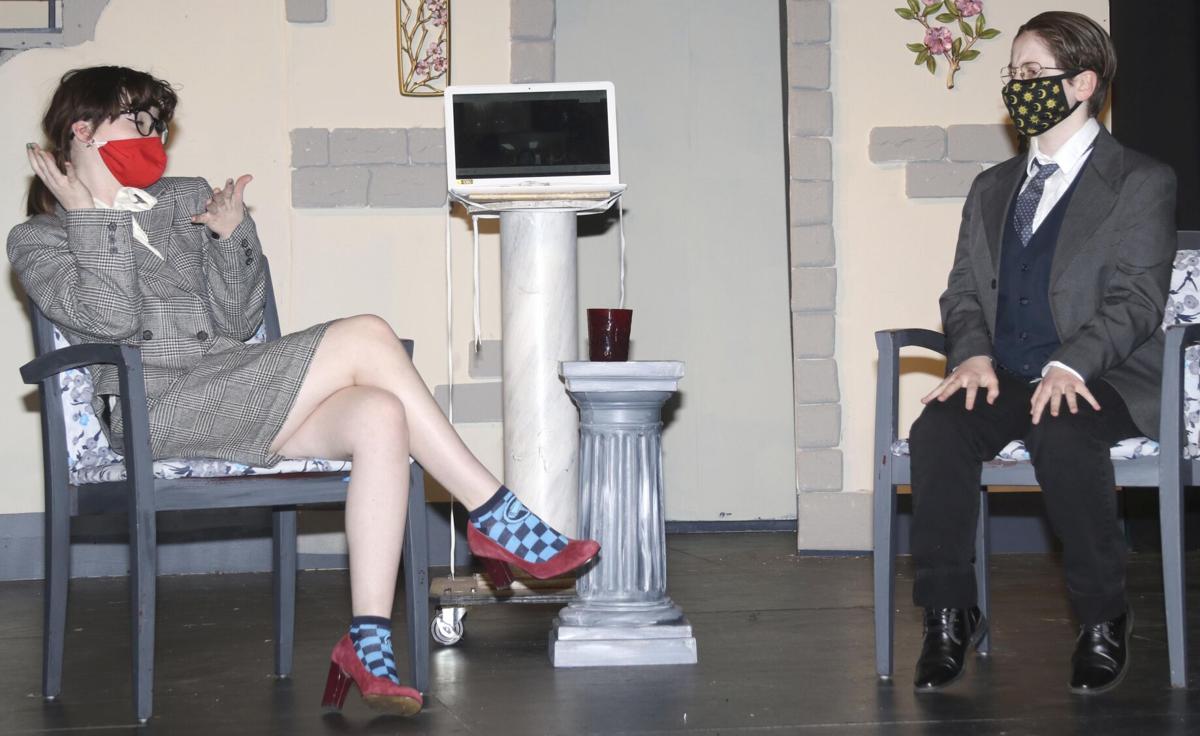 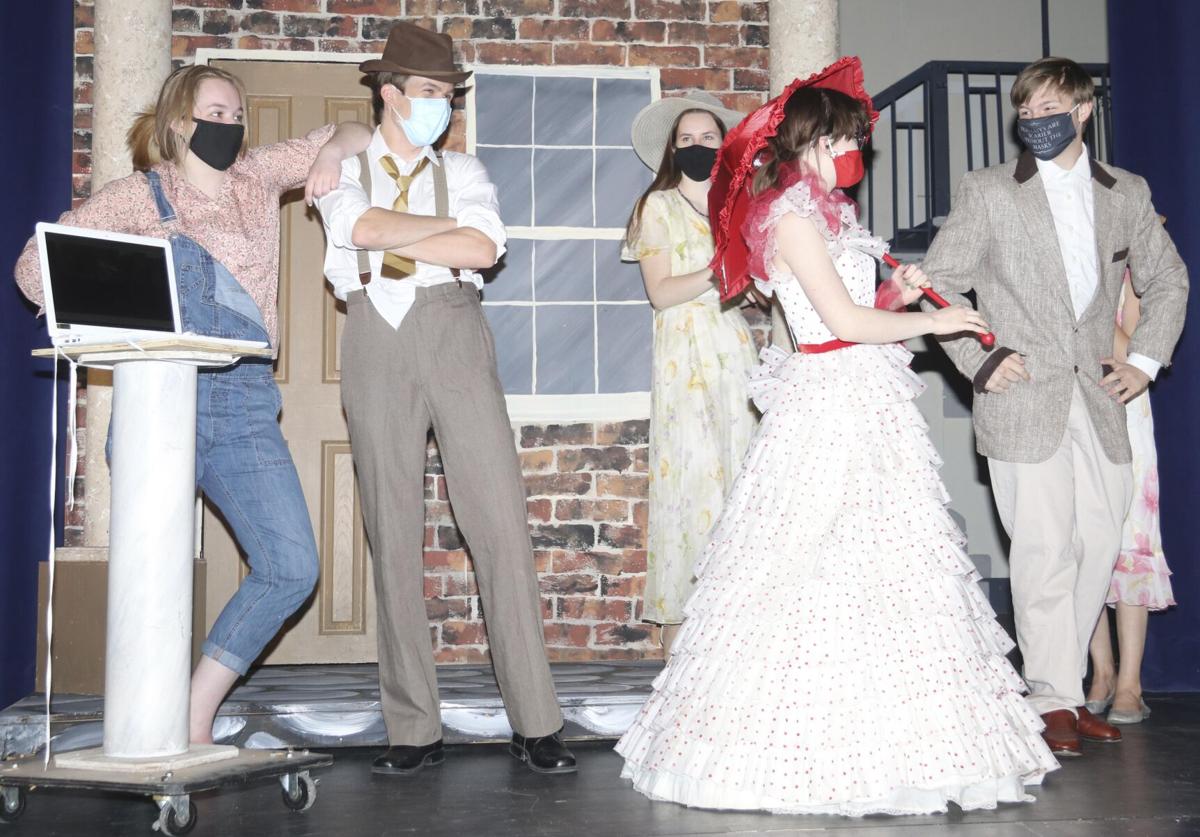 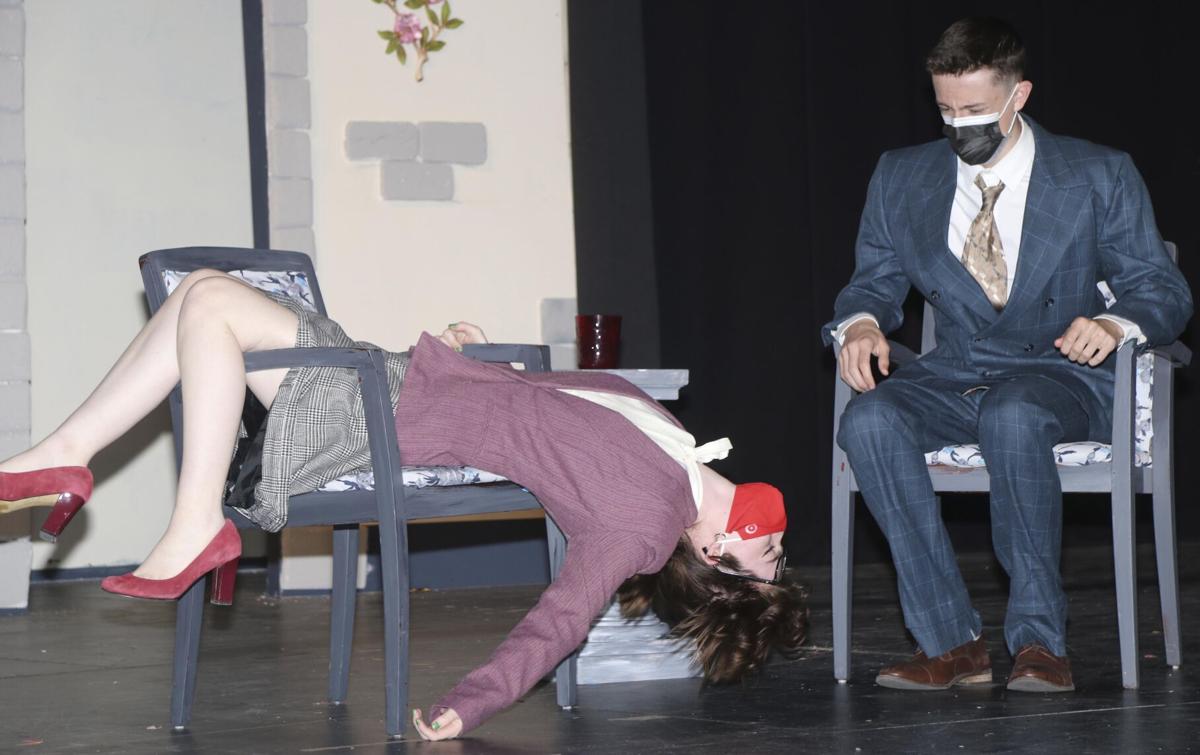 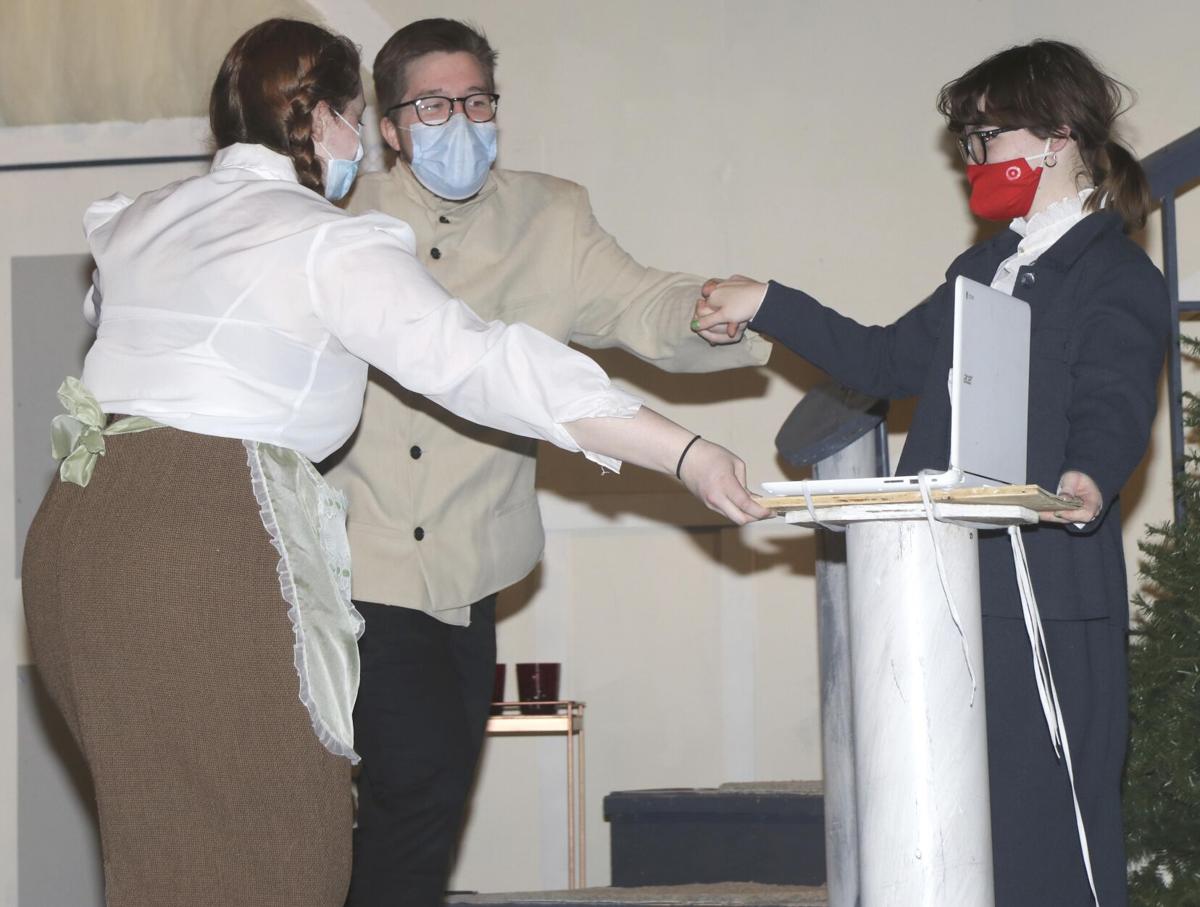 Rachel Watson (as Nora), Elijah Porter (as Ito), and Aidan Lester (as Mame) had to dance with the rolling Chromebook during one of the rehearsal scenes. 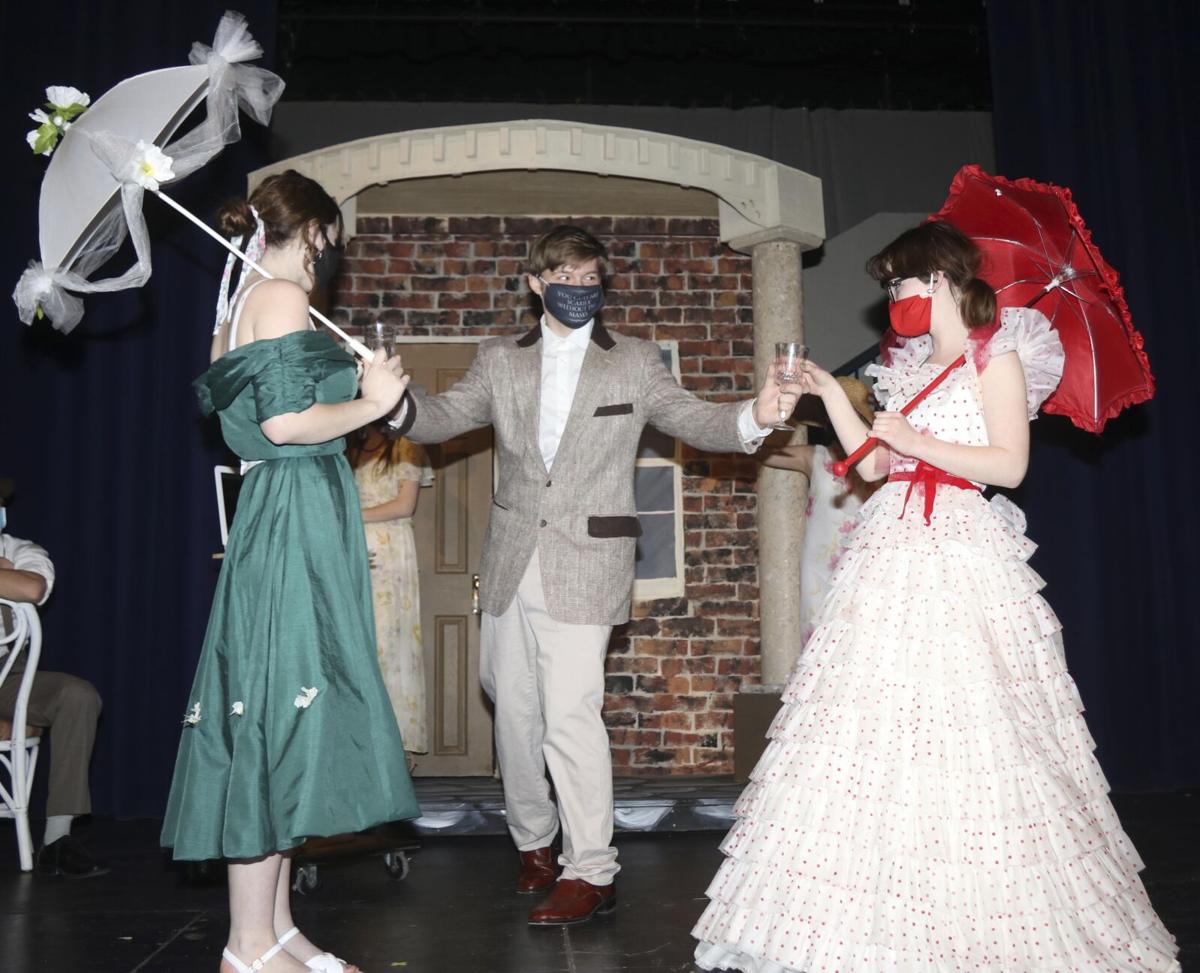 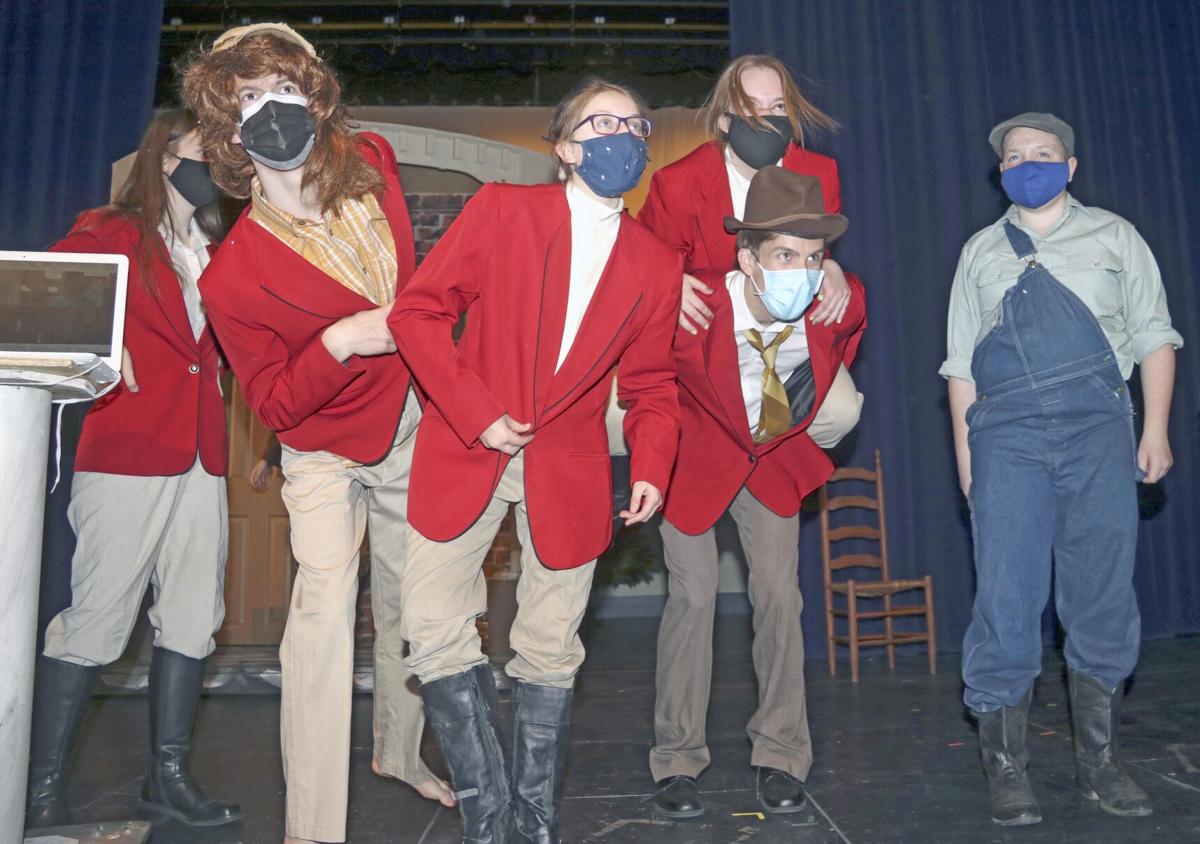 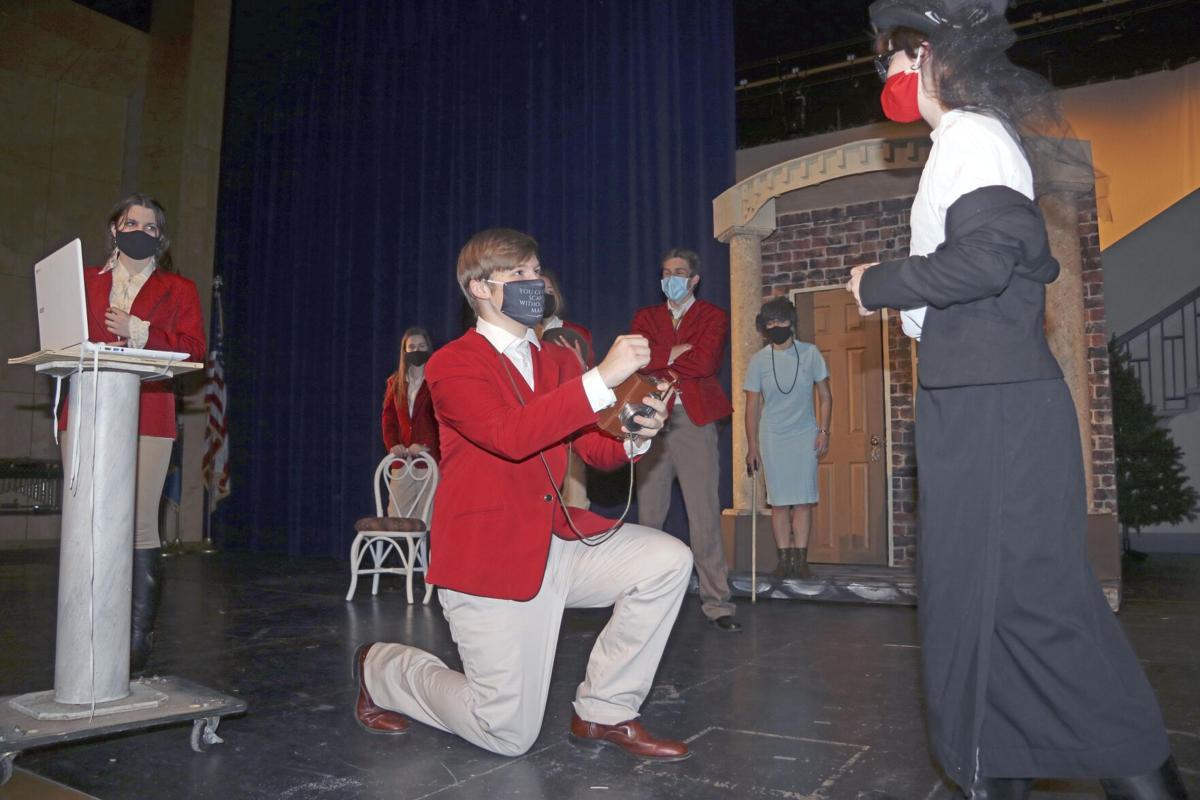 Beauregard Jackson Picket Burnside (Caiden Gerhardson) proposes to Mame Dennis (Aidan Lester), much to the shock and dismay of his extended family and former girlfriend.

Actors in quarantine have caused the Cambridge-Isanti High School Theatre Department to get creative during rehearsals of their spring play performance of “Auntie Mame,” including having Evan Goebel (pictured here portraying Emory MacDougal) and the rest of the cast interact with other actors via a Chromebook on wheels.

Rachel Watson (as Nora), Elijah Porter (as Ito), and Aidan Lester (as Mame) had to dance with the rolling Chromebook during one of the rehearsal scenes.

Beauregard Jackson Picket Burnside (Caiden Gerhardson) proposes to Mame Dennis (Aidan Lester), much to the shock and dismay of his extended family and former girlfriend.

In Hollywood, it’s commonplace for significant changes to be made in the early stages of a show’s production. Included in these changes could be the storyline, adding or subtracting characters, or even switching out actors before the show is viewed by the general public. This is exactly what has happened with the Cambridge-Isanti High School Theatre Department for their traditional spring three-act play.

Last winter, the troupe was making preparations to perform “Auntie Mame,” which is based on the 1958 movie starring Rosalind Russel.

Right in the middle of rehearsals, however, all schools across the state were mandated to go to Distance Learning at the start of the COVID pandemic, forcing all extra-curricular activities to come to a screeching halt.

“Last year was really tough on all of us who were involved in the show,” said Director Viva Anderson. “To have worked so hard for two months and then have the curtain come down before it even went up was devastating.”

“I was a little bit angry as I wanted to put on the show but I also felt as if it was coming due to the rising COVID numbers,” said Eliijah Porter, who was cast as “Brian O’Bannion.”

“I was really disappointed,” added Evan Goebel, who was cast as “Emory MacDougal.” “I was really looking forward to performing that show. So many people were working so hard on it and it was super sad when it all came to an end so quickly.”

The show must go on

Flash forward one year later. With COVID numbers back to a less concerning level, the high school was at least able to return to a hybrid learning model. More importantly, at least for the theatre department, they were again able to put on a “normal” show, albeit with necessary COVID mitigation protocols.

But with that came a choice, take a second stab at “Auntie Mame” or go with an entirely new play.

“This year we wanted to complete what we had started in 2020,” said Anderson. “Our motto has been ‘Same script. New show.’”

Admittedly, that decision was met with mixed emotions from the returning actors.

“At first, I really didn’t want to do Auntie Mame again,” said Maisie Gartner, who was cast as “Pegeen Ryan.”

“When I found out we were doing the same show I wasn’t super excited at first as I thought it would be fun to do something else,” added Porter.

But it didn’t take long for everyone to come around, thanks to the troupe switching things up this time around. Some of those changes were unavoidable as last year’s cast of 35 and crew of 19 included 16 members who were seniors. Rather than replacing 16 people, Anderson trimmed the number of participants down to 17 cast members and eight crew members, meaning some of the cast would have to take on multiple roles.

Other changes were optional, such as if the students wanted to keep the same role as last year. But even for that, Anderson said everyone had to go through another audition.

“So much theatre growth happens for students in high school,” Anderson said. “It is a good experience for them to audition. It is always the director’s decision to choose the cast for the show and by having each one perform a new audition it helped me in the process of making those decisions.”

Whatever the reasons for the changes, it worked.

“The show rebuilt itself in a way that made it a different experience from last year,” said Porter, who added the role of “Ito” this time.

“When I found out we were continuing the show, I was very excited because I knew that there were going to be so many opportunities to try new things and experiment with jobs that you’ve never done before like help backstage with certain things,” said Evan Goebel, who was cast as “Emory MacDougal” last year and added the role of “Lindsey Woolsey” this year. “Because there weren’t nearly as many people as last year, everyone was so involved and I knew from the beginning that it was going to be a blast.”

After everything was said and done, 11 students kept their same role, with many adding additional roles. Five students wound up with completely different roles, and one student was completely new for this year - Katelin Willits, who plays “Ms. Waldo.”

“It wasn’t too difficult to get up to speed because there was less cast than last year and people had different parts,” said newcomer Willits. “So we kinda just started at square one.”

Despite the renewed enthusiasm, things still haven’t been smooth sailing for the cast and crew. Rehearsals started out as virtual only, although Anderson said that was actually a blessing in disguise.

“I strongly support the basis of Educational Theatre which includes character development, so we used this time to work hard on this,” said Anderson.

After two weeks of virtual rehearsals, getting back on stage went relatively smoothly, according to the actors.

“When we first started, it was over Google Meets and at that point, for me it was the hardest,” said Goebel. “But when we got back to the PAC and rehearsed on stage, it all came back to me.”

“It wasn’t that hard to get back into the swing of things,” added Porter. “Some things came naturally, others were different experiences. All in all though it was nice to continue to be on stage.”

Like everything else, the specter of COVID looms large over the cast. Anderson said some students have already had to go through quarantine during rehearsals.

“We also have the reality of students who need to be at home due to being in quarantine,” Anderson said. “So, we include them in rehearsals using a chromebook that is on a wheeled pedestal. Whomever is in person and interacting with them on stage, moves the pedestal to include the online actor.”

And what will they do if an actor is quarantined during the actual performances?

“That’s a really good question,” admitted Anderson. “At this time, we simply do our best to stay safe and take one day at a time.”

Live, in front of a studio audience

Everyone involved proclaims the thought of performing in front of a live audience is the biggest motivator for them. While many have performed in other plays or musicals over the last year, all of those were either virtual or recorded for people to watch online.

“When shows are recorded it doesn’t feel like your work is really paying off,” said Gartner. “It won’t be the same as other years but I am so excited to share this show live with others.”

“I am really excited to preform in front of a live audience because I like having my family there and not over a screen,” added Willits.

“Performing a number of shows without one really put into perspective how important an audience is,” Goebel said. “As actors on stage we feed off of the energy we get from the crowd and I am beyond excited to be able to perform this show that we’ve all worked so hard on.”

Based on the current COVID guidelines for entertainment venues, they should be able to have a limited audience physically attend. Anderson said attendees will need to wear masks and keep proper social distancing. Performances are scheduled for Friday, Saturday, and Sunday, April 16-18. Tickets are currently on sale through www.showtix4u.com.

And while whether the show will actually go on still greatly depends on COVID numbers, which again have been on the rise recently, Anderson insists on everyone keeping a positive mental attitude.

“I sincerely thank Dr. Rudolph, Dr. Gibbs and the district for their continued support of CIHS Theatre, as well as their guidance through these tumultuous times,” Anderson concluded. “I am staying positive that we will be able to bring the curtain up as planned. We all need hope!”

FRED, a groomer At the Fox Hunt, groomer) - Ben Huisenga