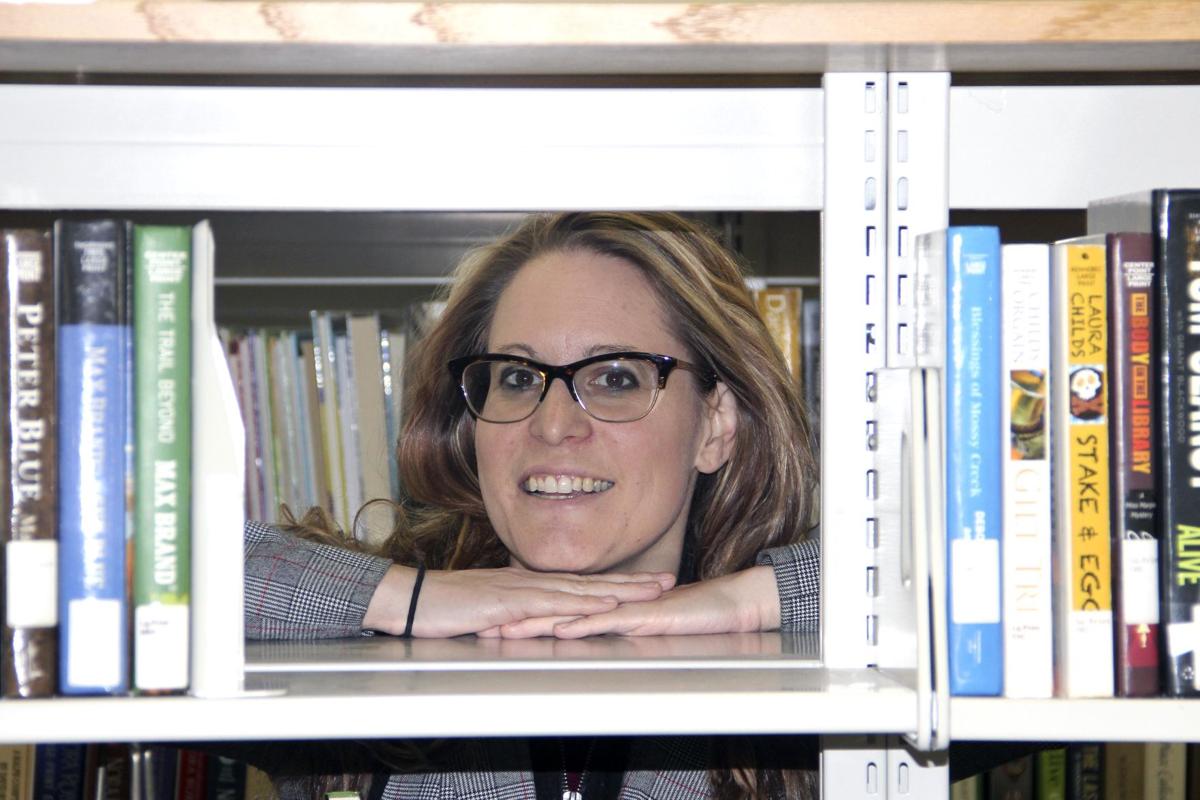 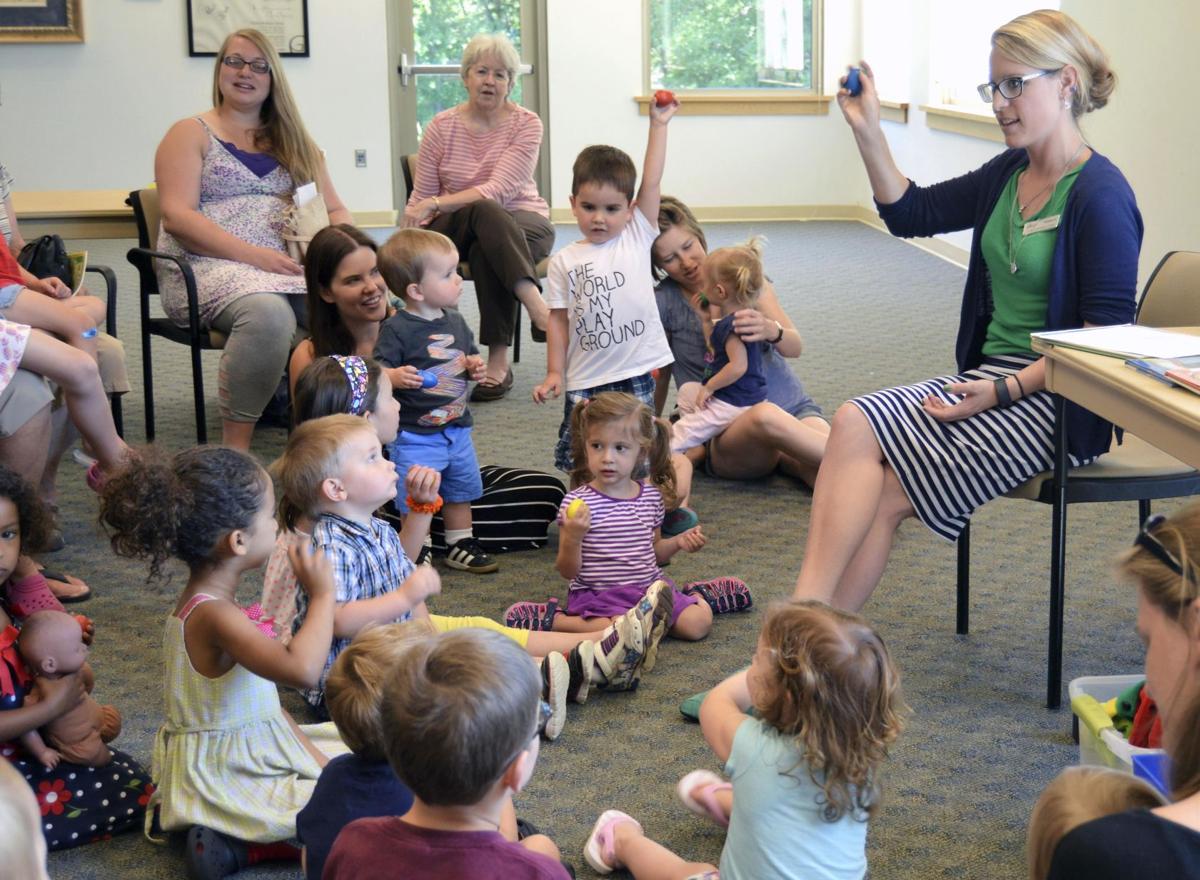 Kirsten Vaughan (right) leads a group of children in an activity during Preschool Story Time at Chisago Lakes Library where she served before taking over as branch librarian in Cambridge this week.

Kirsten Vaughan (right) leads a group of children in an activity during Preschool Story Time at Chisago Lakes Library where she served before taking over as branch librarian in Cambridge this week.

“If you think the library doesn’t have something for you – I challenge you,” she says. “You don’t know everything the library has to offer.”

Kirsten (pronounced KEER-sten) stands ready to take on library doubters and scoffers when she steps in as the new branch librarian at Cambridge Public Library this week. The North Branch High School graduate will take over for retiring branch librarian Nancy Dunbar and plans to be the library’s strongest advocate.

“‘I remember when a friend said, ‘Why are you going to go into libraries? We don’t need them anymore,’” Vaughan said. “Libraries are not about books. I don’t think books are obsolete, but people are wrong when they think we’re only about one thing. We are about lifelong learning and lifelong enrichment.”

Vaughan said a few years ago even her own mother had doubts.

“She mentioned to me, ‘Why would people bring their kids to the library for story time?’ I was like, ‘Are you kidding me?’” Vaughan recalled. “At this point I had my master’s degree, and my own mother didn’t understand the library mission and purpose. I kind of soap-boxed a little bit to her.”

And how does a librarian soapbox?

“There are so many benefits to having story time,” Vaughan said, “reader recommendation, seeing the modeling from the librarian, early literacy practices, plus the socialization amongst the kids, practicing for school and sitting, just having free fun. I could go on.”

The 30-year-old Stacy resident gained that level of passion by working her way up through the East Central Regional Library system right out of college.

Vaughan began her educational journey with the intent to become a doctor of physical therapy and got her undergraduate degree in 2010 from University of Wisconsin in Superior. A side job in the campus library led her to minor in library science.

“I realized I didn’t want the pressure of being responsible for people’s health,” Vaughan said, and rather than continue her education in healthcare, she accepted a five-hour-a-week position at the Chisago Lakes Library working under Carla Lydon, who was branch librarian at the time and is now executive director of East Central Regional Library.

Vaughan quickly showed her versatility by taking on more part-time positions at various branches and moving up through the ranks.

In December of 2016 she earned a master’s degree in Library Science from a Pennsylvania university.

“There’s been a lot to add to my job path,” Vaughan said. “I like variety.”

A jack of all trades

Serving as branch librarian in a small town is just the right place to scratch that itch.

“I suppose one thing that will surprise a lot of people that aren’t familiar with libraries is the variety of services we provide,” Vaughan said. “Already today in Chisago I’ve helped someone with a database – standardized testing for homeschoolers to practice at home ... and someone wanted a reader recommendation so they could buy a Christmas present for a fourth grader.”

Recommending books to patrons is a fun part of Vaughan’s job, she said, along with assisting people with reference questions and staying on top of the myriad tasks required to keep a library’s collections organized.

But what really gets her excited is developing and overseeing programming – creating those special events that run the gamut from Legos to Downton Abbey.

“Programming is my favorite thing,” Vaughan said. “We’ve done a Downton Abbey tea party in Chisago, but we’ve also done a dinosaur dig and a Jedi training where we had cosplay professionals out and different activities like light saber class – just different ways to get kids excited.”

Brainstorming for all ages

Each branch librarian plans and executes their own special events in addition to the ECRL system-wide programming like summer and winter reading events, which are planned primarily by headquarters staff.

There are not strict requirements as to how many events a library could or should offer, and branches are given freedom to develop programs suited to their local patrons.

“We have a really wide range of communities from Wyoming to Aitkin,” Vaughan said, “so it’s hard to do too many things strictly uniform.”

Vaughan brainstormed with former librarian Nancy Dunbar to come up with this past year’s Cambridge escape room for teens and Kahoot! trivia night, a popular online quiz game.

Proving that a branch librarian’s imagination must conjure up activities to attract and enrich all ages, Vaughan hasn’t forgotten even her youngest patrons.

“I’m starting a baby story time!” Vaughan said. “I’m really excited about that. The (preschool) story time at Cambridge is large enough that there’s enough for a baby story time, so we’re going to start that in February.”

She’ll also plan more programming around popular movies with book adaptations like Star Wars, hoping for outcomes like those after the first major event she planned in Chisago Lakes – Ninjago training.

“I remember these two kids talking to each other about the different characters and who was better and who has done better in the series,” Vaughan said. “They’re kind of having a book talk at age five or six at this event. I just thought, ‘This is good!’”

A new library for a new generation

Not only does Vaughan get excited about all ages having fun at the library, she’s ecstatic about being the first librarian to oversee the new facility being prepared for a May 2020 opening at the former GracePointe Crossing building at Highway 95 and North Dellwood Street in Cambridge.

“I’m having a fair amount of input,” she said, “along with Carla and the other members of the team. ... Because I’ve jumped around a bit, I’ve seen the pros and cons of different layouts, so my thought is, ‘If we’re going to do this, let’s do it right so you don’t have to redo it.’”

That foresight seems to indicate a belief that the Cambridge Public Library is going to be around for awhile, contrary to what those doubters and scoffers might say.

Get to know your new librarian:

“Born a Crime” by Trevor Noah about growing up under apartheid. I really like memoirs.

I suppose completing my

Considering the time of year, I’d say anything Christmas from Mannheim Steamroller. You put that on and I’m happy.

Just discovered “Miracle at Midnight” – a true story about this entire town that came together to save thousands of Jewish people in the span of days in World War II.

My dog Finnley. I’m training him to be a reading therapy dog, so maybe he’ll come to work with me. He’s a border terrier/schnauzer mix. He’s ridiculously cute.

I followed John Green a lot, and Terri Blackstock - I like

Dream for the future?

As a branch librarian there’s so much variety I feel like I’m a jack of all trades and master of none. So I’d like to be a children’s or teen librarian or reference librarian. There would still be plenty of variety, but I could feel like I’ve actually mastered something.