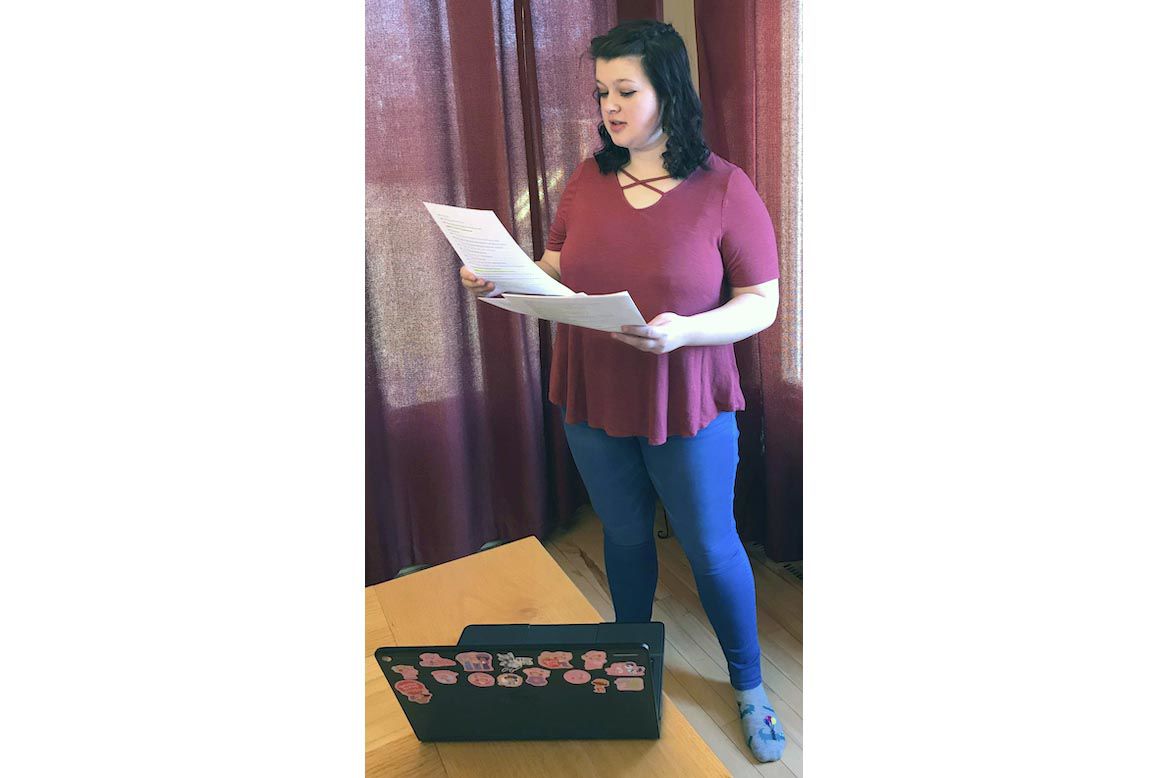 Alixandra Petrik goes through her lines while recording her part for “The Walls Have Eyes” on her computer. 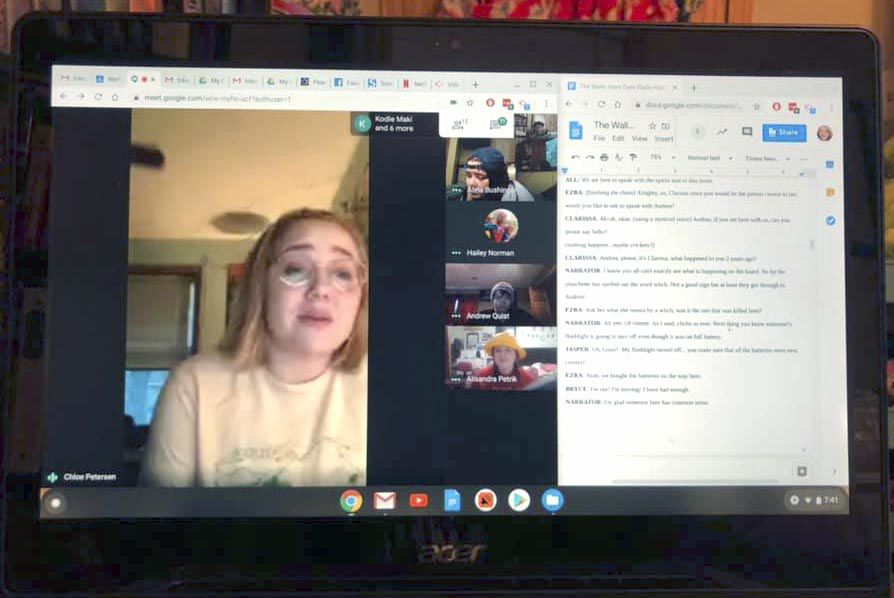 The actors for “The Walls Have Eyes” run through their lines collectively via Google Hangout, while receiving tips on performing for radio from director Laura Michels.

Alixandra Petrik goes through her lines while recording her part for “The Walls Have Eyes” on her computer.

The actors for “The Walls Have Eyes” run through their lines collectively via Google Hangout, while receiving tips on performing for radio from director Laura Michels.

The show must go on.

Nowhere has that old entertainment industry adage been more appropriate than with the North Branch Theatre Department. After enduring nearly two years of having to rearrange and modify their various performances due to a much-needed remodeling of the high school’s auditorium, the troupe thought they finally were going to be able to go through an entire school year unscathed. Then the COVID-19 pandemic and mandatory distance learning happened.

Just a couple weeks into rehearsals for their ambitious spring musical of “Big Fish,” all school activities were put on hold. Director Laura Michels had to break the news to the cast right after spring break.

“This COVID thing has evolved so quickly, and I wanted to be sure that my kids got the most updated info,” she said. “But our plans evolved so quickly that I sent three emails in the space of two days with information that had already changed from the previous one. I know the kids were super bummed. “Big Fish” is such an amazing show. The kids knew how awesome the show was too.”

In the meantime, Michels was trying anything she could think of to keep the students engaged, including running various contests on Facebook, with mixed results. Then, one day, she had an epiphany. Meg Johnson, a senior this year who has been Michels’ stage manager the past three years, had previously given her a copy of a script Johnson had been working on.

“At first, I didn’t know how we could use it, but now we have adapted it for “radio” and plan to release an audio recording of it,” Michels said.

“I had shared the script with Laura earlier this year for advice on editing and revising,” said Johnson, who plans on attending Winona State University next fall and becoming a screen/playwright. “I never expected that we would actually use the script for a show.”

According to Johnson, the 45-minute play, titled “The Walls Have Eyes,” is “a spin on the cliche horror troupes, but with a twist.”

A new twist on an old genre

It didn’t take much convincing to get enough students to fill the ten roles in the play. In fact, there was enough interest to add an emcee and even two students performing a “commercial break.”

“When she (Johnson) told me about it, I immediately knew I wanted to do it,” said senior Alixandra Petrik, who was cast to play “Josephine” in “Big Fish” and will play “Clarissa” in “The Walls Have Eyes.” “I definitely cried when we got the news that it (Big Fish) was being canceled. I’ve been missing theatre during this quarantine and thought this was a great way to still do a show.”

So the next question was how they would be able to pull it off considering they couldn’t gather together. Michels decided the best way to put on a show was to do it in the style of an old-fashioned radio production. Each actor was given their lines and are recording their parts individually. Once each part has been sent to Michels, she and co-director Scott Tolzmann will do the mixing and assembling into the final product, which is scheduled to be broadcast on Facebook Live on Friday, May 1 at 6 p.m - the same day “Big Fish” was scheduled to open. The recording will also be placed on their and/or the school district’s website.

A unique challenge for the actors

Leading up to the recording their parts, all of the students got together with Michels via Google Hangouts in order to go through several read-throughs and to get tips from Michels on how to act out their parts.

“That was definitely a little rough,” admitted Petrik. “It’s a lot harder to read through when you have some people lagging and not being able to hear the best. (But) it was nice, though, to be able to see everyone.”

Junior Alina Bushinger agreed with Petrik. “Our read through was definitely interesting,” said Bushinger, who had several ensemble parts in “Big Fish” and who plays “Ezra” in the radio production. “It was fun, but not as much fun as doing it in person - not being able to be with my friends. But it’s better than not doing it at all.”

However the opposite was true, according to the two actors, when it came time to record their parts.

“It’s not tough, it’s just different,” said Bushinger. “When I say my line, I have to pause and I’ll read the other characters’ lines in my head and then I’ll read my lines. With doing live performances, if you mess up, you mess up. But with the radio show, it’ll be easier because I’ll have my script right in front of me and I can redo it if I want to.”

“It’s definitely easier not to have to memorize lines or blocking for this show,” added Petrik. “Normally we spend two months going over everything, but when recording the radio show you can rerecord as many times as you want.”

The rerecording of their parts is where the two do differ, however.

“While recording, I was able to do it in about 20 minutes,” Petrik said. “I did most of my lines at least twice and some up to ten times to get it to sound right.”

The three students are unsure if they will be able to listen to the finished product ahead of time, or if they will hear it for the first time along with everyone else. But they all eagerly anticipate it.

“I hope everyone enjoys it when it finally premieres,” said Johnson.

“I’m excited to be able to listen to it with my family when it comes out,” said Petrik.

“I am so excited,” said Bushinger. “I can’t wait to see how it’s all going to turn out. We are all trying something new. It’s a change, and change is good.”

The music hasn’t died yet

Michels hasn’t completely ruled out the possibility of the radio show being just a diversion until they can put on “Big Fish” yet this spring.

“As of right now, the show is “suspended” since the MSHSL has not officially canceled spring sports,” Michels said. “We have some ideas to maybe resurrect the show at a later date if this quarantine passes quickly. But for now we have to just wait like everyone else and see what happens. It is most difficult to think of my senior kids missing out on their senior musical. So if there is any chance we can resurrect the show in any way, we will do it.”