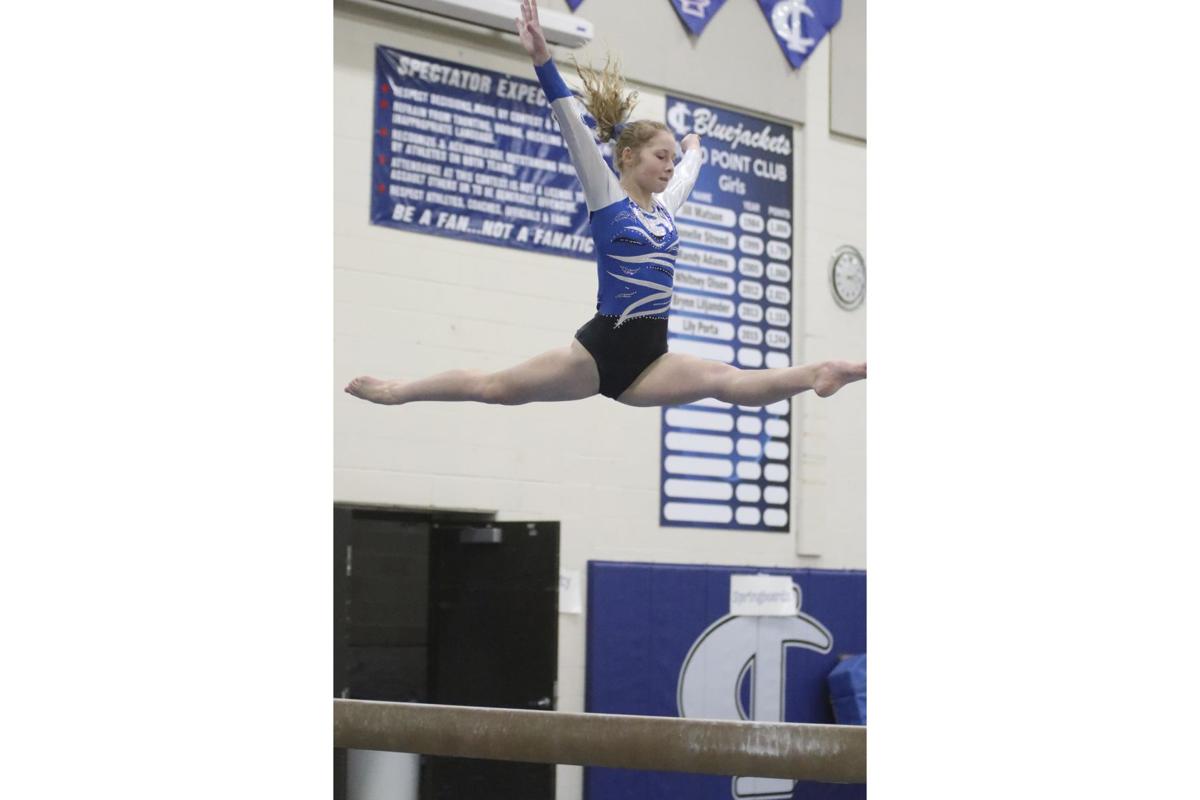 C-I’s Alison Barber hits a perfect switch leap on the beam during the Bluejacket All-Around Invite on Saturday, Jan. 25. The freshman scored a meet-best 9.45 en route to a fifth place finish with a score of 36.15. 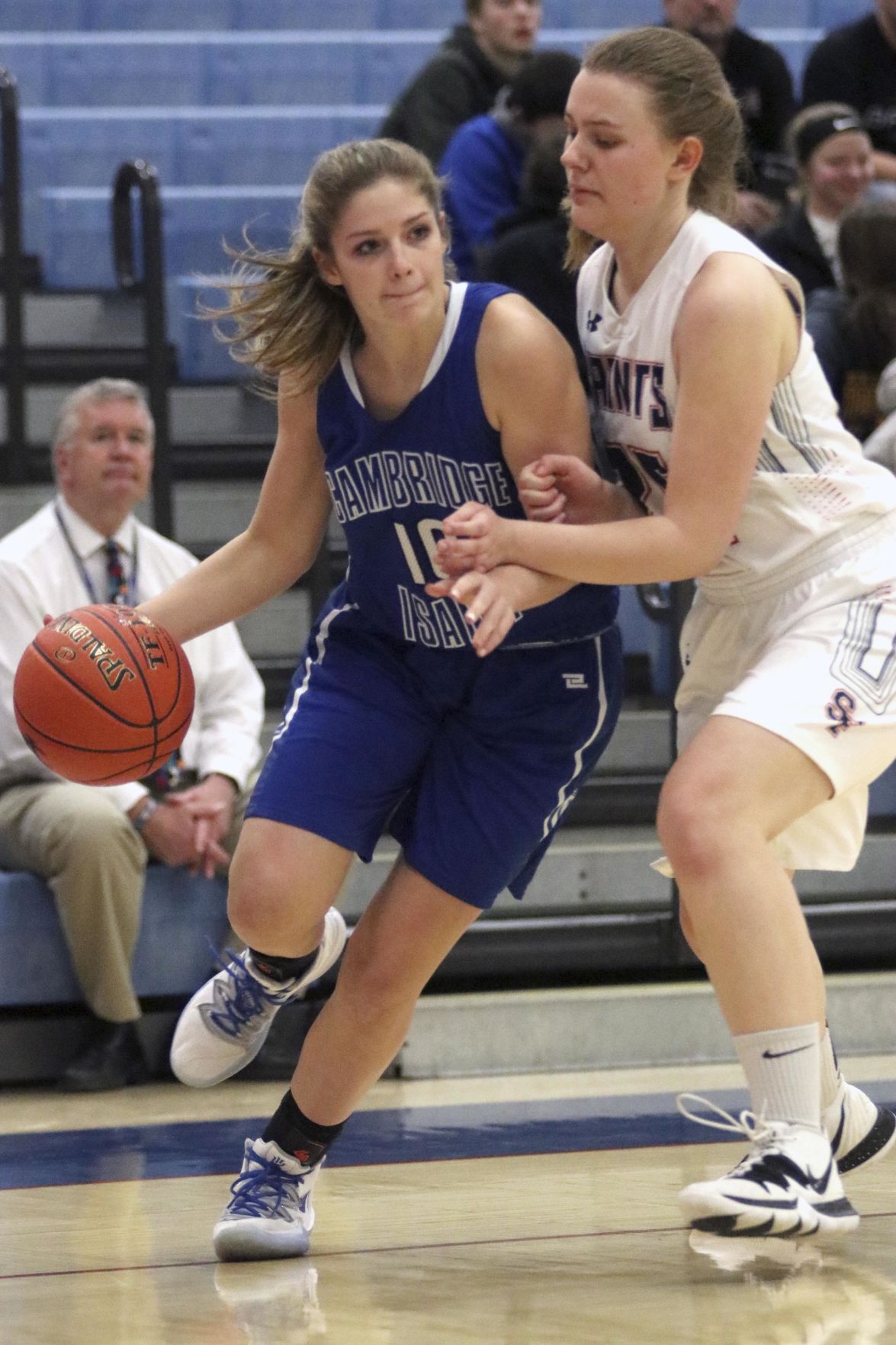 Senior Kelsey Karels drives around a St. Francis defender during C-I’s 54-27 win over the Saints on Friday, Jan. 24.

C-I’s Alison Barber hits a perfect switch leap on the beam during the Bluejacket All-Around Invite on Saturday, Jan. 25. The freshman scored a meet-best 9.45 en route to a fifth place finish with a score of 36.15.

Senior Kelsey Karels drives around a St. Francis defender during C-I’s 54-27 win over the Saints on Friday, Jan. 24.

Cambridge-Isanti continues to roll through the competition, coming up with two more lopsided wins to run their winning streak to 11.

Last week saw the Jackets top two of their closest rivals, defeating North Branch 94-64 and St. Francis 88-71. In the home game against the Vikings, the Jackets jumped out to a 46-33 halftime lead. And while the Vikings managed to trim the lead to just two points early in the second half, another C-I run created the 30-point win.

Although he struggled from the three-point line, senior Henry Abraham still racked up 32 points to lead the team. Micah Ladd added 18 points, with Connor Braatan contributing 15.

It was a similar story against the Saints as C-I built up a 48-28 halftime lead and only allowed St. Francis a minimal comeback to pick up the win. Abraham again led the way with 25 points, with Braatan close behind at 21 points. Hunter Melander had his best game of the season, adding 19 points.

The Jacket girls cagers are also on a nice winning streak after their two wins last week against the same two teams as the boys.

On Tuesday, Jan. 21, C-I topped North Branch 72-47. Mikayla Aumer and Amme Sheforgen made for a potent combination, scoring 27 and 20 points, respectively. Jana Swanson almost made it a trio of 20-point scorers, adding 18 points.

Three nights later, the Jackets picked up a very ugly win over St. Francis, beating the Saints 54-27 in a game that could have been much more lopsided. C-I held St. Francis to just five points in the first half, all from one player. However, C-I could only muster 19 points in the half. The second half was a little better, but plenty of missed shots and scrambled play still kept the score lower en route to the win.

Aumer and Sheforgen each had 13 points, with Swanson adding 11 to lead the Jackets. The win gives the Jackets a five-game winning streak and a season record of 11-5.

The Jackets felt the “sting” of a dual-meet defeat for the first time this season, but it didn’t sting too badly as C-I lost to an admittedly better Big Lake team 146.3-143.7.

C-I was quite satisfied with the results even in defeat to the #1-ranked Class A team in the state as their total was the best of the season. Plus, freshman Laci Lorinser proved she is worth keeping an eye on as she eclipsed her career-best all around score, earning a first-place 36.425. Laci Leverty picked up the other apparatus win, taking first on vault with a “hefty” 9.55 on her pike tsukahara.

The following Saturday, during the annual Bluejacket All-Around Invite, C-I showed their team depth in securing 5th, 4th, 3rd and 2nd places in the meet. Lorinser’s career-best score from the previous meet only lasted two days as the freshman smashed that mark, picking up a well-earned 37.1, which was just .05 away from first place.

AnnaGrace Nelson earned third, scoring a solid 36.4 – also a career-best. Leverty was next, scoring 36.25 to take fourth. Rounding out the Jackets’ blockade was Alison Barber, who eclipsed the 36-point mark for the first time ever, scoring 36.15 for fifth.

The Jackets picked up two wins last week, but also added a loss.

The first win came over Princeton by a score of 6-1 on Tuesday, Jan. 21. Cambridge-Isanti-Mora controlled the entire game, scoring four goals in the first and second periods before allowing Princeton’s one goal midway through the third. Chloe Nelson picked up two of the goals, with the other four coming from four different players.

The next win came against St. Francis-North Branch by a score of 4-1 in the third meeting between the two teams. In this game, C-I-M more than doubled the Saints shots on goal, sending 50 pucks at the Saints keeper, with the four goals coming off the sticks of four different players.

The loss came at the hands of Chisago Lakes by a score of 5-1 as the Wildcats turned the tables on the Jackets, outshooting them 43-25. The lone goal for C-I-M came from Sami Olson.

The Jackets suffered a pair of lopsided losses last week, falling to Monticello 7-0 and Sauk Rapids-Rice 7-2. In the loss to the Storm, C-I took an early lead on a goal by Wyatt Lindell, but saw the Storm score the next six goals to break the game wide open. Jaxon Jones scored a late third-period goal for the other Jacket tally.

In the second head-to-head meeting between the two teams, Chisago Lakes again topped C-I, this time by a score of 102-79. The Jackets did get four first places, with Mitchell Patrick winning the 200 and 500 freestyles, Eli Bingham winning the 200 IM and Zach Melby winning the 100 fly.

On Saturday, Jan. 25, the Jackets finished fifth in the home invite. Ethan Hintermeister had the best finish for C-I, coming in second in diving.