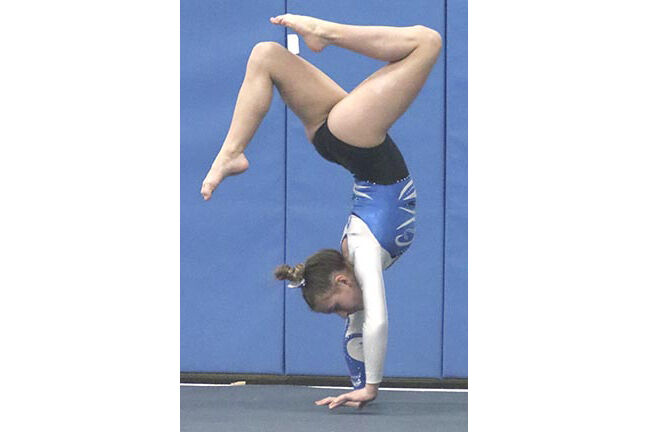 Cambridge-Isanti’s Abby Kryzer executes a handstand double pirouette in a double stag position during her floor routine during the Jackets’ meet against North Branch. The 8th-grader took second on the event with an 8.825. 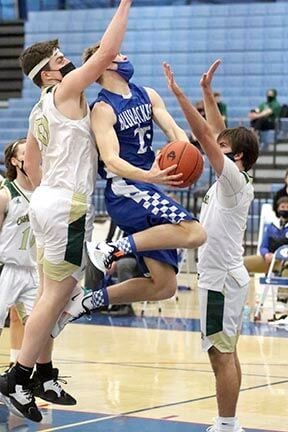 Cambridge-Isanti’s Chase Carstensen puts up an acrobatic shot between two Chisago Lakes defenders during the Jackets’ game versus the Wildcats on Tuesday, Jan. 26.

Cambridge-Isanti’s Abby Kryzer executes a handstand double pirouette in a double stag position during her floor routine during the Jackets’ meet against North Branch. The 8th-grader took second on the event with an 8.825.

Cambridge-Isanti’s Chase Carstensen puts up an acrobatic shot between two Chisago Lakes defenders during the Jackets’ game versus the Wildcats on Tuesday, Jan. 26.

On Thursday, Jan. 28, C-I played their second outdoor game of the season, beating rival St. Francis 3-1. After the first period ended in a 1-1 tie, the Jackets took control of the scoring and scored one unanswered goal in the remaining two periods to collect the win. Scoring for the Jackets were Jacob Ziebarth, Easton Parnell, and Luke Pierson. C-I also outshot the Saints by a wide margin, putting 63 shots at the St. Francis goalie, compared to just 27 shots on goal for SF.

Two nights later, it was another impressive offensive showing as the Jackets dominated Mora en route to a 7-2 win. Jacob Ziebarth got the hat trick for C-I, with four other skaters adding goals.

The team, who is touting a 4-1 record, have two home games this upcoming week. The second of the two games, which was supposed to be played outside versus Henry Sibley, has been moved up to a 4:15 p.m. start time, and may be moved indoors if the predicted cold weather comes to fruition.

While the Jackets picked up their second victory in as many meets, the results were far from satisfactory as a self-professed lack of concentration led to a ton of falls and sloppy routines. The final score of the home meet versus North Branch was 137.0 - 129.225.

C-I still swept the top spot in all four events and the all-around, with the two Lacis again earning most of the top spots. Laci Leverty took first on vault (9.35) and the all-around (34.675), while Laci Lorinser claimed first on bars (9.05) and floor (8.85). Senior Ellie Goodmanson added a first on the beam with an 8.85.

C-I’s undefeated streak to start the season did come to an end last week, but not before the cagers added one more victory.

On Tuesday, Jan. 26, C-I earned a 43-36 win over Chisago Lakes, coming back from a 19-14 halftime deficit to claim the “w.” Mikayla Aumer was the leading scorer with 18 points for the Jackets.

Three nights later, while the winning streak was broken at four, the team couldn’t hang their heads too low as they were topped by a traditionally strong Becker squad 78-36. Aumer was held to 10 points, while Evelyn and Maraya Wiltrout each had eight points.

The Jacket grapplers had a tough week against strong competition last week, dropping all four matches.

On Thursday, Jan. 28, C-I faced section foe Forest Lake, losing to the Rangers 53-21. That same night, the team dropped a close match to Hastings 34-31. In the match against the Raiders, it all came down to the heavyweights as the team score was knotted up at 31-31. Unfortunately, C-I couldn’t quite pull out the win on a 4-0 decision.

The following night, C-I traveled to Becker for another triangular, losing to the Bulldogs 51-17 and to Dassel-Cokato 41-22.

Indivdually, Leo Edblad won all four of his 106 pound matches over the two days. Logan Lindquist (120 pounds), Payton Doty (138/145 pounds), and Devan Jones (220 pounds) each won three out of their four matches.

A lack of consistency seems to be the name of the game this year for C-I, as the Jackets appear to suffer through cold shooting every other game. This was very apparent last week as C-I fell twice, losing 57-32 versus Chisago Lakes and 68-54 versus Becker.

The Jackets were barely able to eclipse double-digits in first half points for the second time this season, picking up only 11. And once again, against the Wildcats, the second half was only slightly better as C-I took the loss. Connor Braaten picked up eight points in the game.

Against the Bulldogs, the Jackets fell behind 41-16 at the half, but outscored the host team 38-27 in the second. Jordan Sperl was the leading scorer for C-I, with 12 points.

The Bluejackets had a strong showing in their only meet of the week, versus Chisago Lakes, but the team’s lack of depth in only being able to compete two or fewer individuals in each varsity event resulted in a 93-82 team loss.

C-I picked up a total of seven out of 12 first place finishes in the meet. Mitchell Patrick (200 freestyle and 100 backstroke) and Eli Bingham (100 fly and 100 breaststroke) led the team with three wins, as both were also on the winning 200 medley relay team. Christopher Williams, who was also part of the 200 medley relay, took first in the 50 freestyle. Finally, Joseph Larkin touched the wall first in the 500 freestyle.