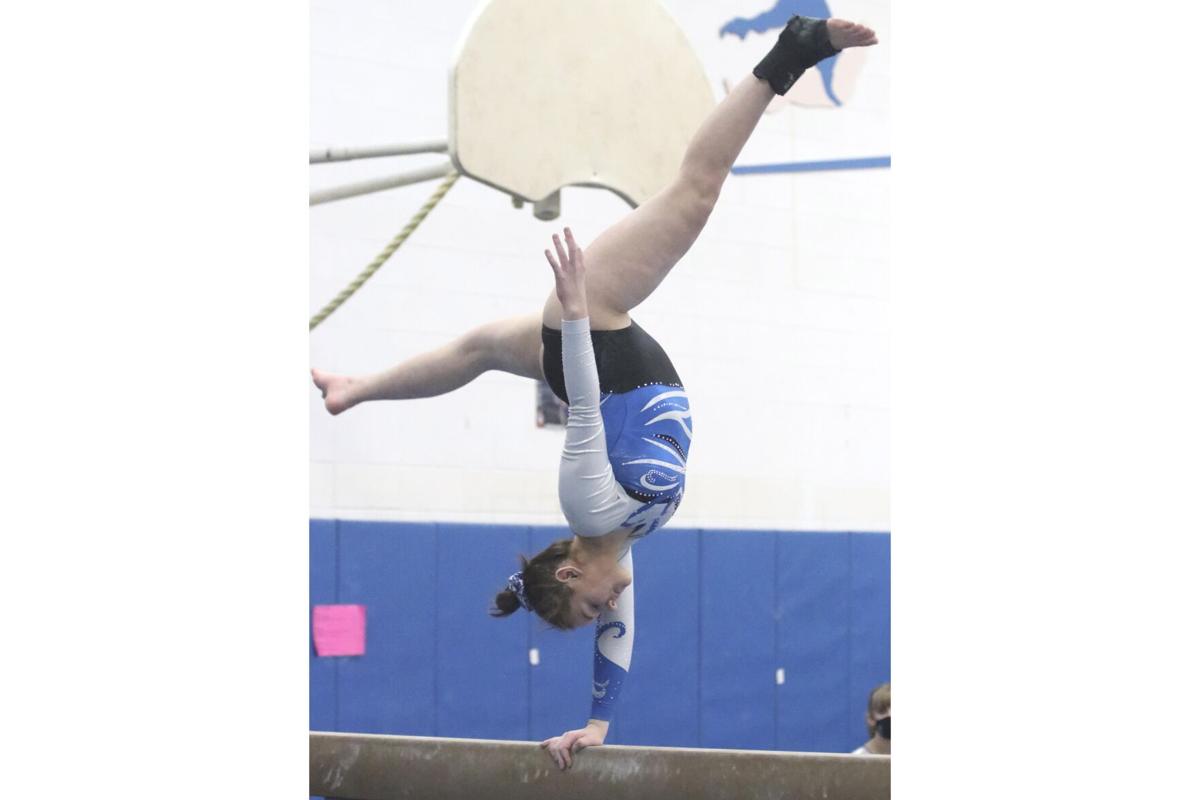 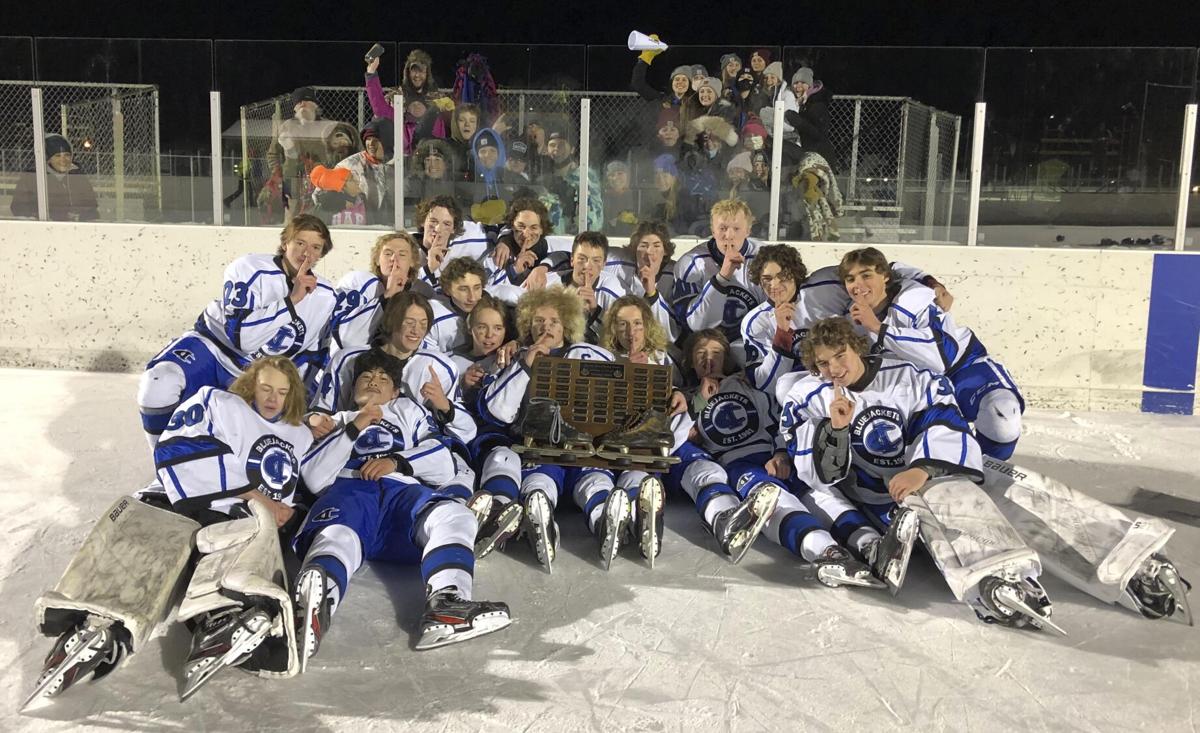 The Bluejacket boys hockey team celebrated with the student section the recapturing of the Rusty Skates Trophy following their 2-1 win over rival Princeton. The game was played outside at Heritage Greens, much like the first-ever games between the two teams. 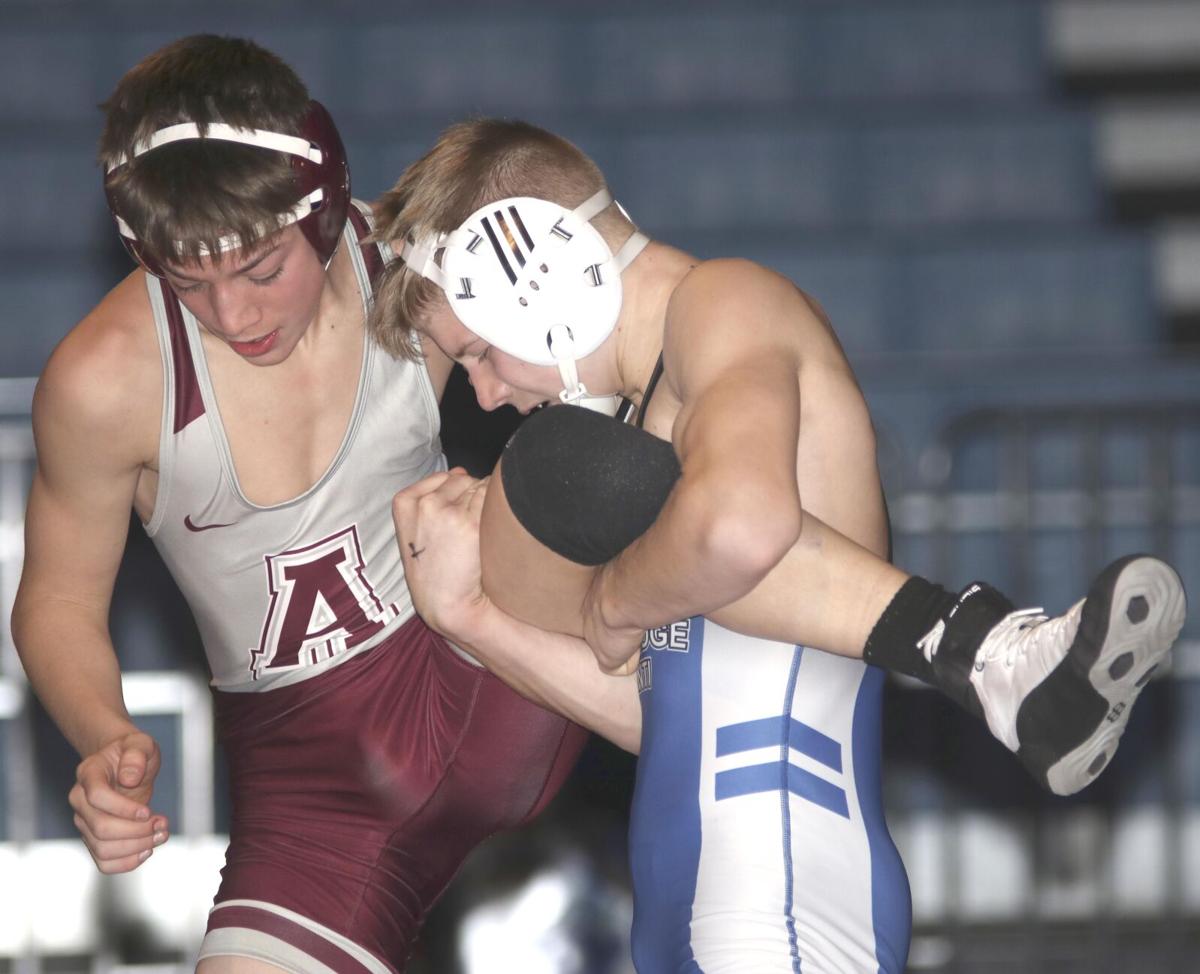 Cambridge-Isanti’s Carter Wothe has his Anoka opponent in a precarious position with a single-leg pickup during their 113 pound match on Saturday, Jan. 23. Wothe would win the match via a decision.

The Bluejacket boys hockey team celebrated with the student section the recapturing of the Rusty Skates Trophy following their 2-1 win over rival Princeton. The game was played outside at Heritage Greens, much like the first-ever games between the two teams.

Cambridge-Isanti’s Carter Wothe has his Anoka opponent in a precarious position with a single-leg pickup during their 113 pound match on Saturday, Jan. 23. Wothe would win the match via a decision.

The Bluejackets made a strong, emphatic statement that they intend to take back their conference title, scoring an impressive 140.675 - 132.85 win over defending state Class A and Mississippi 8 conference champion Big Lake.

The Jackets swept the top spots in all four events, plus the all-around over the Hornets, who enter this season having graduated several members from last year’s team, plus already experiencing an injury. Laci Leverty captured first place on vault with a 9.35 pike tsuk. She also earned a 9.375 on floor. Meanwhile, Laci Lorinser grabbed first on bars with a 9.0 and beam with a 9.175. The two Lacis finished 1-2 in the all-around, with Lorinser besting her teammate with a 36.575, compared to Leverty’s 36.5.

The Jackets had only one game last week, but it was a huge game played under special circumstances. Bringing the annual “Rusty Skates Trophy” game versus Princeton back to its origins, C-I took on the Tigers on an outdoor rink, at the rinks in Cambridge Heritage Greens, just a puck’s shot away from the home of C-I’s first-ever varsity games.

The Jackets made the most out of this special occasion, earning a 2-1 win to reclaim the trophy after five years in the possession of the Tigers.

After a scoreless first period, C-I got on the board with a goal by Ryan Olsen. Following a Princeton goal that tied it up in the third period, captain Jacob Ziebarth netted the eventual game-winner. Bobby Hendricks picked up his second win of the season, making 28 saves on 29 shots.

The Northern Tier Stars, the new co-op between St. Francis, Cambridge-Isanti, and North Branch, began their inaugural season with a pair of solid wins.

In the Stars’ first-ever game, the team jumped out to a four-gaol lead over Northern Lakes, and then held on for a 4-2 win. Jenna Kurkowski earned the team’s first ever goal in the second period, with Jasmyn Sibell, Jenna Hari, and Marissa Miller also scoring. The Stars outshot the Lightning 59-30. Meghan Gibb earned the victory in the net.

Two nights later, the Stars topped some of Cambridge-Isanti’s former teammates as Northern Tier topped Pine City Area (which skates as a co-op of Pine City, Mora, and Rush City) 4-1. Once again, the Stars dominated the shots on goal, this time by a 49-16 margin. Kathryn Busse picked up two goals to lead the Stars.

The Jackets improved to 3-0 on the season, picking up solid wins against North Branch and St. Francis.

Against the Vikings, Mikayla Aumer picked up 25 points and Croix Vavra added 11 as the Jackets beat their neighbors to the east 65-43. Three nights later, Aumer almost outscored the entire Saints team, racking up 35 points in a 58-36 win.

C-I is definitely feeling the strains of having a completely new team after graduating all but one letterwinner from last season, as the Jackets fell twice to start their season.

Foremost, C-I will have to find a go-to scorer to at least to a certain extent replace Henry Abraham, who finished his high school career as the school’s all-time leading scorer by a wide margin. This was evident against the Vikings as C-I limped to only 11 points in the first half, then finishing with 33 points in a 65-33 loss. Jordan Sperl was C-I’s leading scorer, earning 15 points.

The Jackets went 1-1 last week, following a pair of unusual (for this year at least) dual matches. The Jackets opened the week up with a 44-33 win over Blaine. After jumping out to a 15-0 lead, the Jackets never trailed in picking up the win.

On Saturday, the Jackets were supposed to host both Mora and Anoka, but Mora had to pull out, leaving just a head-to-head meeting with section foe Anoka. Once again, the Jackets got out to an early 15-0 lead, but this time, they couldn’t hold off a strong Tornadoes team, losing 38-30.

The Jackets continue to struggle putting together a complete varsity team, with this season, the team not having a single varsity diver on the squad. The end result is the team will need to focus on individual successes rather than team results.

Last week, this showed as C-I fell to Delano 99-69 and Monticello 88-76, with both meets featuring the final events being swum as exhibition only by C-I’s opponents. In each meet, C-I picked up a lone first place, both in the 50 freestyle. Christopher Williams earned the win against Delano, while Mitchell Patrick finishing first against the Magic.