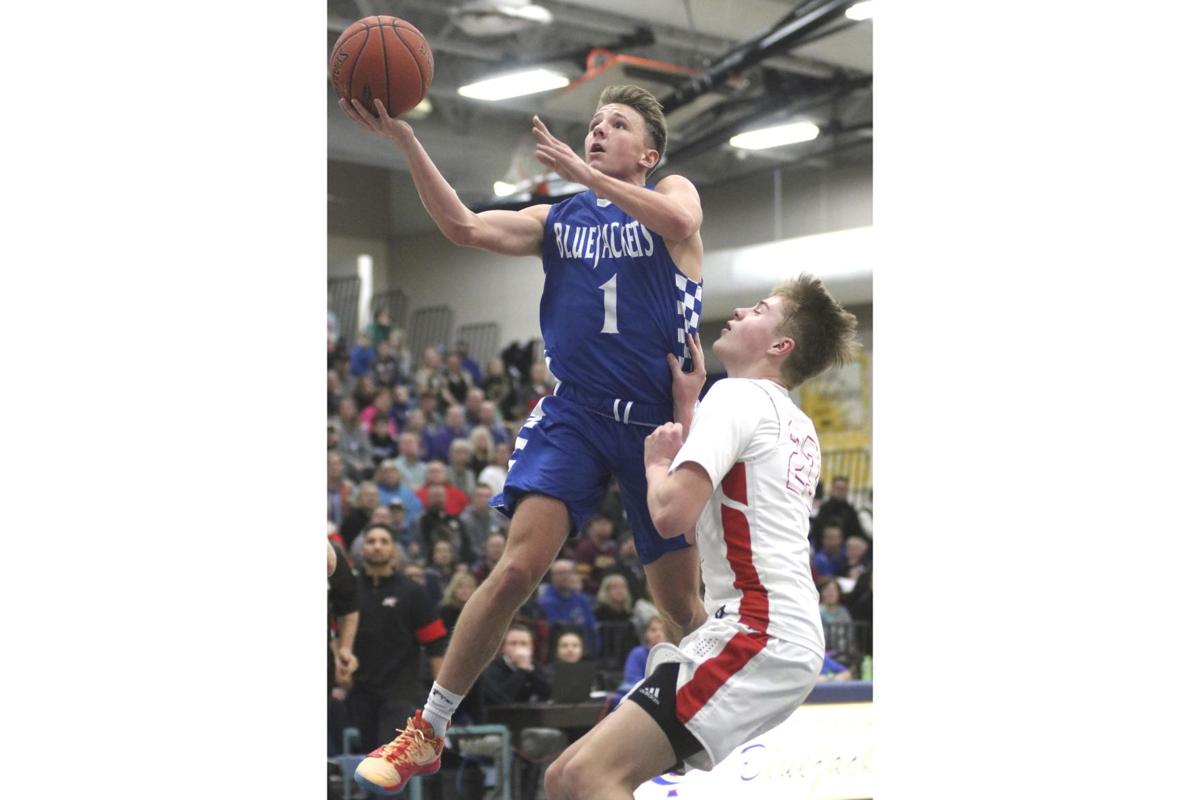 Henry Abraham drives to the basket past a Monticello defender for two of his 34 points. 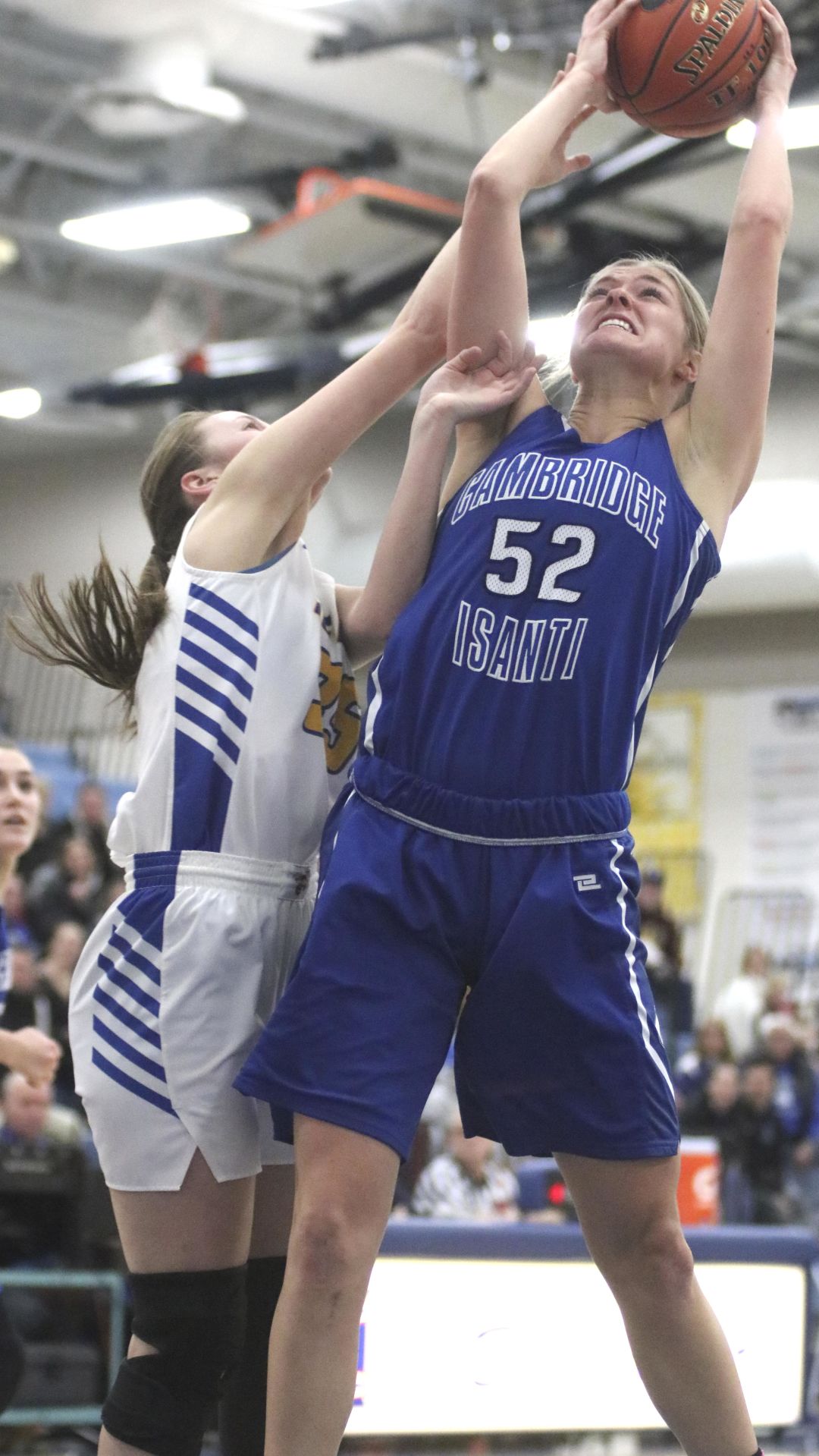 Jana Swanson outreaches a Big Lake player for a rebound during C-I’s 70-68 win over the Hornets.

Henry Abraham drives to the basket past a Monticello defender for two of his 34 points.

Jana Swanson outreaches a Big Lake player for a rebound during C-I’s 70-68 win over the Hornets.

First up was Big Lake on Tuesday, Jan. 7, where the Jackets handled the Hornets 75-46. Henry Abraham had 27 points in the game, with Micah Ladd adding 18 and Connor Braaten chipping in 12.

Next up was C-I’s second home game of the season, with the hosts topping Monticello 68-54. The first half ended with a tie score at 33. The second half was all Jackets as C-I outscored the Magic 35-21. Abraham was back above the 30-point mark in the game, scoring 34. Ladd was the next highest scorer with 19 points as the two of them almost matched Monticello’s team total.

Like the boys, the girls squad picked up wins against Big Lake and Monticello.

The final score against the Hornets was much closer than it should have been, with Big Lake coming back from a 43-24 halftime deficit to force the Jackets to eek out a 70-68 win. Makayla Aumer was the leading scorer for the Jackets with 20 points. Jana Swanson and Jackie Olander each picked up 13 points and Amme Sheforgen added 12.

It was much of the same three nights later as C-I jumped out to a 40-23 halftime lead, only to see the host Magic come back to make it close before C-I sealed up a 62-57 win. It was the same cast of leading scorers in this game as well, with Aumer collecting 26 points, Swanson adding 13 and Olander picking up 12.

The Jackets had a “down and up” week last week.

At Princeton, they were missing senior AnnaGrace Nelson due to illness. That, coupled with several falls on beam, vault and floor led to a disappointing 138.5 score, which was still plenty enough to beat Princeton’s 125.4.

Laci Leverty took first in three of the four events by scoring 9.2 on vault, 8.55 on bars and 9.1 on floor. Alison Barber earned the other two firsts, taking the top spot on beam with a one-fall 8.675 and in the all-around with a season-high 34.625.

At the Lakeville Invite, they not only had Nelson back, but she came back with a vengeance, scoring a season-high 36.2 to lead the Jackets to a fourth place 143.7. Nelson took fifth on beam with a 9.4, plus added a career-best 9.1 on bars.

Laci Lorinser had three career-best scores in the meet, scoring a 9.25 on bars, 9.45 on beam (which was good for third place in the meet) and a 9.15 on vault to highlight her day. Leverty also eclipsed three career bests, scoring 9.45 on vault, 8.8 on bars and 36.3 in the all-around.

In a two-day marathon, the Bluejackets wound up in 12th place at the Bemidji Rick Lee Duals. Over the course of Jan. 10-11, teams wrestled a total of six times, with the Jackets going 1-5. Their lone win was a close, three-point victory over Pierz 42-39. In that match, C-I had to come from behind, securing a pin at 220 pounds by Devan Jones and a forfeit win at 285 pounds to take the pool-play match.

Mitchell Patrick, Eli Bingham and Zach Melby each picked up at least one first place for the Jackets, with Patrick’s coming in the 50 and 100 freestyle, Bingham’s coming in the 100 fly and breaststroke and Melby’s coming in the 100 backstroke. The 200 medley relay, which includes those three swimmers plus Christopher Williams, also took first.

Two days later, the Jackets competed in Duluth, coming in eighth. The top score for C-I came from diver Ethan Hintermeister, who took second in the event.

In the win over the Saints, Chloe Nelson picked up yet another hat trick.

It was Ashton Parnell’s turn to pick up the hat trick in the loss to the Lumberjacks, with Nelson tallying the other goal.

The Jackets suffered two tough losses last week, falling to Chisago Lakes 5-2 and Southwest Christian 4-3 in overtime. The two games were polar opposites of each other in the shots department, with the Wildcats firing 48 shots on goal, compared to 18 for C-I. Against the Stars, C-I had the commanding lead in shots by a margin of 43-18, but it was to no avail as the Stars scored just two minutes into overtime to steal away the win.