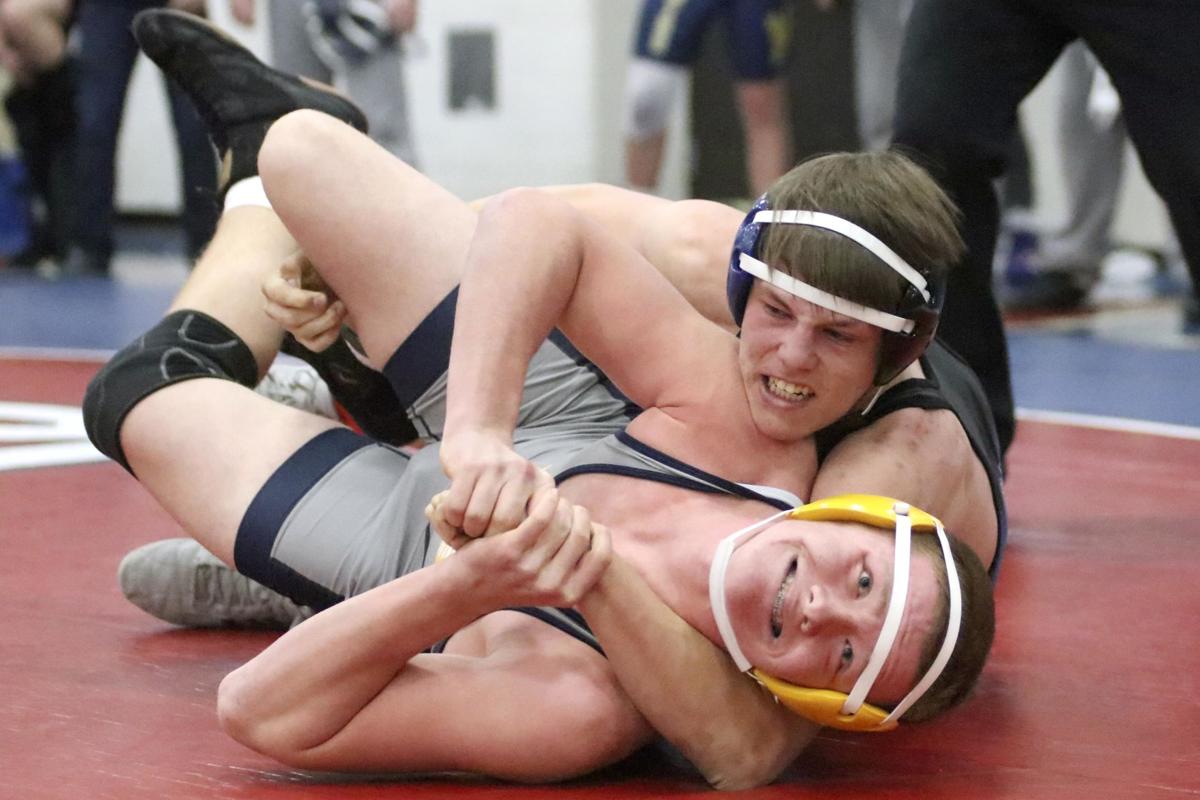 The grimaces of Bluejacket wrestler Michael Noonan and Mahtomedi’s Tony Kammerer tell two opposing stories as Noonan tries to complete a pin of Kammerer during the Bluejacket Individual Invite on Saturday, Jan. 4. 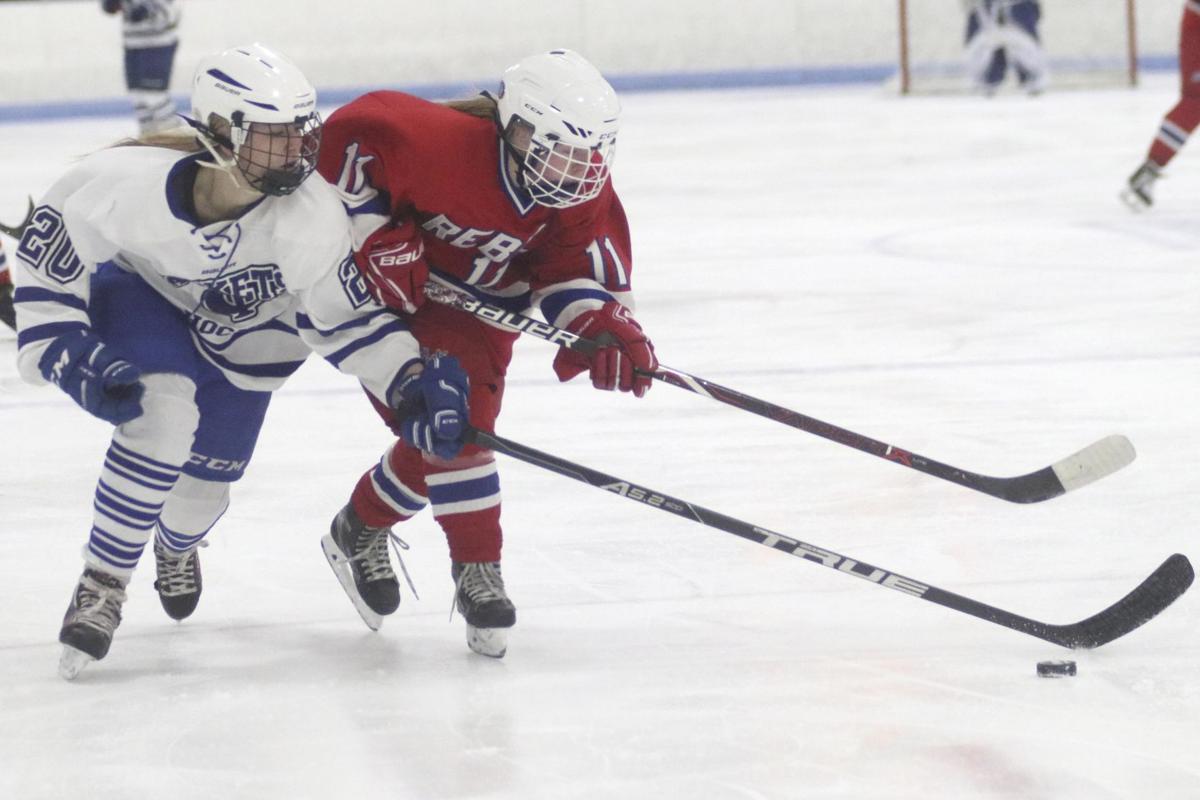 Cambridge-Isanti-Mora’s Leah Hari battles for control of the puck with Moose Lake’s Lily Kahara during the Jackets’ 6-2 win over the Rebels.

The grimaces of Bluejacket wrestler Michael Noonan and Mahtomedi’s Tony Kammerer tell two opposing stories as Noonan tries to complete a pin of Kammerer during the Bluejacket Individual Invite on Saturday, Jan. 4.

Cambridge-Isanti-Mora’s Leah Hari battles for control of the puck with Moose Lake’s Lily Kahara during the Jackets’ 6-2 win over the Rebels.

The Bluejackets came out of their Christmas break looking to put their three weeks of uninterrupted practices to good use as they competed in the Minnesota Gymnastics Judges Association Invite held in Faribault on Saturday, Jan. 4. And aside from a few rough patches on beam and vault, they did exactly that in scoring a 140.95, which was good enough for a fourth-place finish out of 16 teams.

The Jackets were the top-scoring team on the bars, scoring a 34.75. They also added their best team floor score in three years with a 36.7.

Individually, senior AnnaGrace Nelson earned 10th place in the all-around with a score of 35.8, doing so in spite of being under the weather the whole meet. Laci Leverty continued her stellar floor scoring, placing 8th with a 9.4. Seventh-grader Abby Kryzer tied for 9th on the beam with a score of 8.9.

The first game last week for the Jackets was against Mahtomedi on Tuesday, Dec. 30, as part of the Herb Brooks Holiday Classic in Blaine.

The contest started slow with neither side scoring a goal in the first or second periods. Mahtomedi would get the best of the Jackets in the third period, scoring four goals, resulting in a 4-0 loss for the Jackets.

The next game was against Minneapolis on the last day of the year, Dec. 31. The first period set the game up to be a competitive battle between the two squads with the score at 1-1. Minneapolis would take over in the second period, scoring three goals with no answer from the Jackets. The third period was more of the same, and in the end the Jackets would lose the last game of the decade with a final score of 6-1.

The Bluejackets first game of the decade came against Delano/Rockford. In the first period it was back and forth goals, and the Jackets ended up 2-1 after the first period. The girls would shut out their opponent and go up 3-1 going into the final period, where they would seal the deal, giving them a 5-2 win.

Finally, C-I-M would end their week with a home game against Moose Lake on Jan. 2. In the first period neither team could score a goal. In the second period Moose Lake would score two goals while the Jackets could only answer back with one of their own, putting the score at 1-2. However, in the third period the Jackets would bulldoze the competition, putting up five goals while holding Moose Lake to a goose egg. Senior Chloe Nelson would tally four goals in the game, with three of them coming on breakaways in the third period to lead the Jackets to the 6-2 win.

The Bluejacket girls basketball team had two games last week, with the first coming against the Blaine Bengals on Dec. 31. In the first half, the Bluejackets fell behind by 9, with the score 35-26. The Jackets would outscore the Bengals 35-29 in the second half, but came up just short, losing by 3 in a close contest by a score of 64-61. Jackie Olander put up a fantastic statline, with 17 points, seven rebounds and seven assists.

The last game of the week was on Friday, Jan. 3, against Becker. In the first half, the Jackets couldn’t stop Becker from scoring, allowing them to get 45 points in a half, compared to 35 for C-I. The team tried putting together a comeback performance in the second half, and almost accomplished it, but wound up losing 78-73. Jana Swanson would post a double-double with 18 points and 13 rebounds.

The only game last week came on Friday, Jan. 3, against the Blaine Bengals in a rematch from last year’s section finals game.

The Bluejackets lit up the Bengals in the first half, going up 49-31. In the second half, the Jackets fell apart offensively a little, but it didn’t matter for Coach McDonald and the boys as the Bluejackets would win their seventh-straight game 78-70.

The Jackets hosted their annual Bluejacket Individual Invite, which is traditionally the first Saturday in January. Going against grapplers from six other schools, the Jackets built up enough team points to come away with the championship, scoring 180.5 points.

The Jackets continue to struggle with depth in the pool, falling to Chisago Lakes 102-84 at home on Thursday, Jan. 2. The team loss came despite C-I taking first place in seven events, with Eli Bingham (200 IM, 100 breast), Mitchell Patrick (50 and 500 freestyle) and Zach Melby (100 fly and backstroke) doing a majority of the winning. C-I also got a win in the 200 medley relay.

Two days later, C-I competed in the Panther Invite at Spring Lake Park, coming in sixth out of eight teams. The same three swimmers earned most of C-I’s points, with Bingham’s fourth place in the 100 fly being the best result of the bunch.

The Jackets suffered another defeat last week, but it wasn’t on the ice. Due to the flu putting a majority of the team on the sidelines, C-I’s game against St. Francis was postponed.