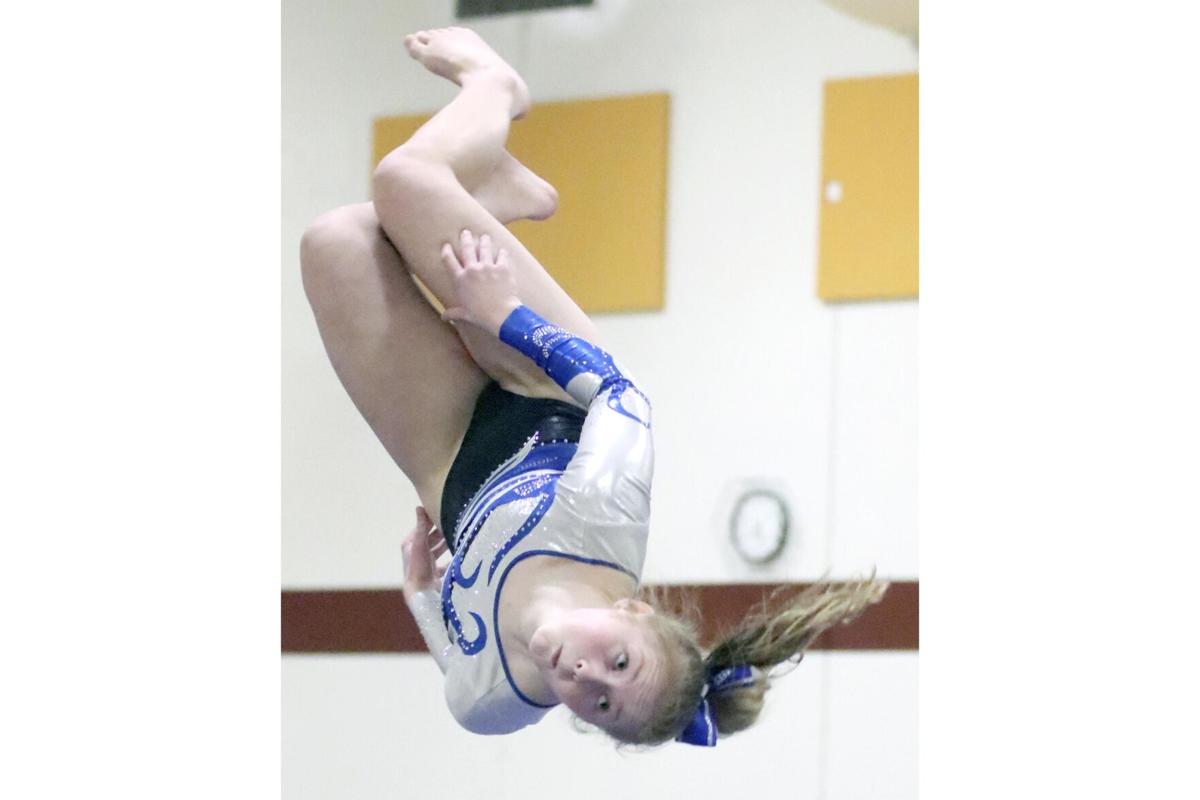 Cambridge-Isanti’s Alison Barber hits her full-twisting dismount off the beam during the Section 7AA meet at Forest Lake on Friday, March 19. Barber took second place on the event, earning her a trip to state. 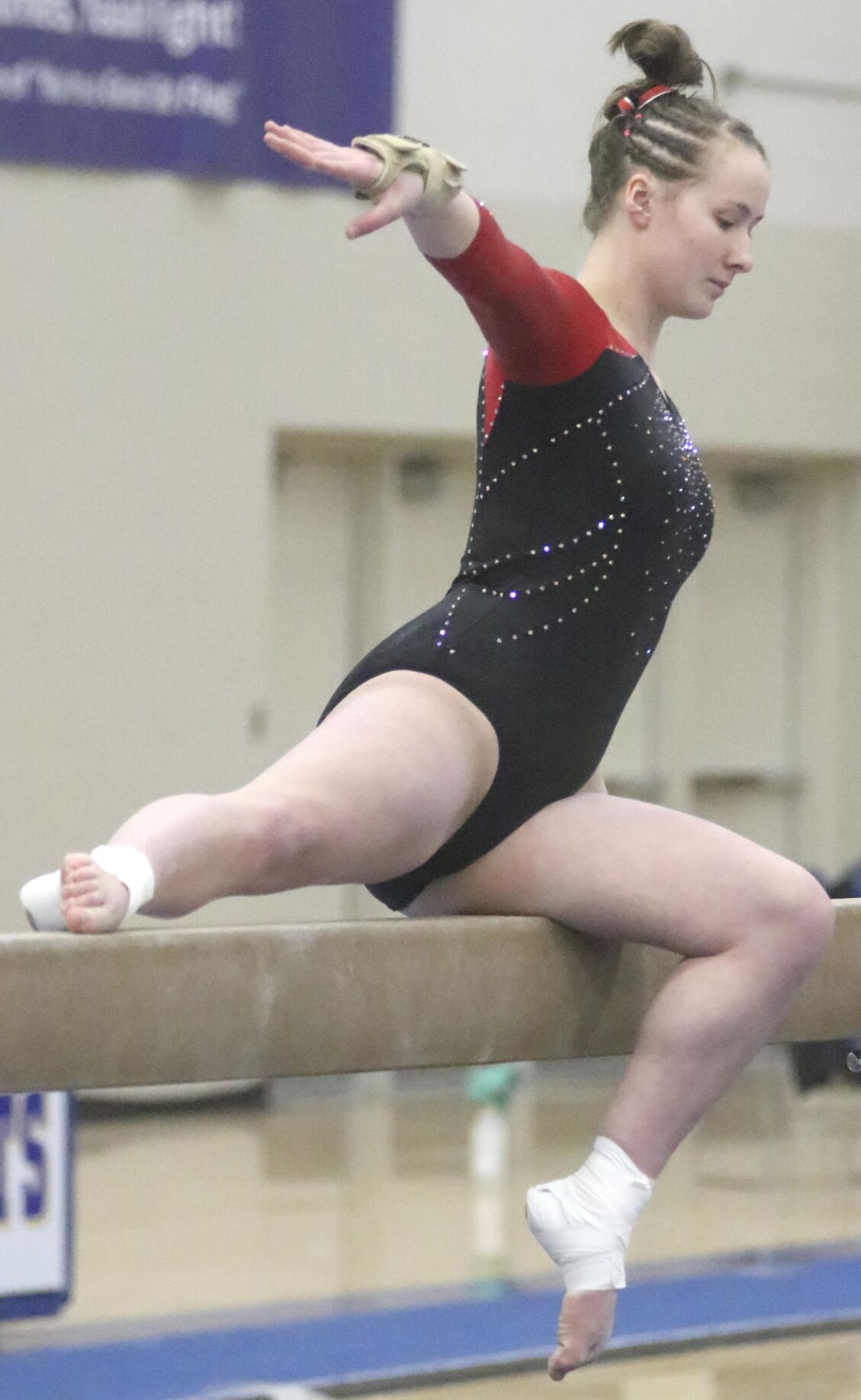 North Branch senior Bekah Fish competes on the beam during the Section 7A meet at Big Lake on Saturday, March 20.

Cambridge-Isanti’s Alison Barber hits her full-twisting dismount off the beam during the Section 7AA meet at Forest Lake on Friday, March 19. Barber took second place on the event, earning her a trip to state.

North Branch senior Bekah Fish competes on the beam during the Section 7A meet at Big Lake on Saturday, March 20.

The streak is over. After 11 straight seasons of finding ways to keep a firm hold of the Section 7AA championship trophy, the Cambridge-Isanti gymnastics team couldn’t quite pull off an upset to extend the streak to a dozen. Forest Lake, who was also the last team to top the Jackets back in 2009, captured their fifth team state meet berth by scoring a season-high 145.825, compared to C-I’s 143.850, which was C-I’s season-high score. Anoka, who entered the meet ranked third in Class AA, again took the runner-up trophy with a score of 144.875.

While it would have been nice to have the streak continue, Jacket head coach Wendy Rooney said she was proud of how her girls performed at sections.

“Both Forest Lake and Anoka are very talented teams this year,” Rooney said. “We came into the meet knowing we weren’t favored to win. I’m just proud how we went out there and didn’t just give up. They still fought for every tenth of a point in order to get the best results possible. We had so many good talks over the past two weeks about what we wanted last night to look like for us and I think we all left the gym really happy.”

Despite the two-point difference between the Rangers and the Jackets, the meet was actually up in the air until the final rotation. In fact, C-I held a half-point lead over Forest Lake as the Jackets competed on bars while the Rangers finished on vault. And although the Jackets swung to a season-high 35.25, the Rangers exploded for a 37.750 score on vault, highlighted by an incredible layout yurchenko by all-around champion Claire O’Gorman that scored a 9.875.

C-I started the meet on beam, and like it has been all season, the team struggled to stick their routines, taking five falls on the event. However, their 35.625 proved to be the second-best team score on the event for the meet. The other positive coming from the event was Alison Barber’s 9.375 took second place in the meet, sending the sophomore to the state meet.

The Jackets rebounded nicely by scoring a season-high 36.725 on the floor, which included Laci Leverty’s 9.5 score that qualified her for state as well.

The vault proved to be yet another season-high for C-I, with a team score of 36.25. Leverty’s 9.475 pike tsuk gave the junior her second state meet berth in as many events.

Finally came the previously mentioned bar score, where Leverty made it three-for-three in state meet berths (she didn’t compete on the beam) with a third-place 9.2. Laci Lorinser, despite nearly taking a fall on bars, still managed a fourth-place 8.975, qualifying her for state on the event for the second year in a row.

The North Branch Vikings also came into their section meet with the #3 seed, and likewise finished the meet by taking third with a score of 135.425. Defending Class A state champion Big Lake repeated as section champion, scoring a 144.4.

The Vikings had up-and-down results in the meet, which was completed in break-neck speed due to COVID guidelines turning it into a four-rotation (compared to the typical eight rotation) meet. From start to finish, the meet lasted just over one hour, meaning all of the gymnasts had only a couple minutes between completing one event and warming up on the next one.

Despite that, the Vikings pushed through the fatigue and wound up qualifying two to the state meet. Senior Paige Bauer will be making her second-straight appearance at state on vault after winning the section championship on the event with a score of 9.425. Joining her will be 8th-grader Dakota Esget, who took second in the all-around with a score of 36.525.

Also because of COVID, the state meet will look much different than years past. Taking place at Champlin Park High School, each class will be broken into two sessions, with four sections competing at 11:30 a.m. and the other four sections competing at 6 p.m. The team and individual competitions will take place at the same time, meaning if a gymnast qualified as part of a team and as an individual, her score will count for both competitions. The individuals not part of the section team champions will rotate with their section’s team champion.