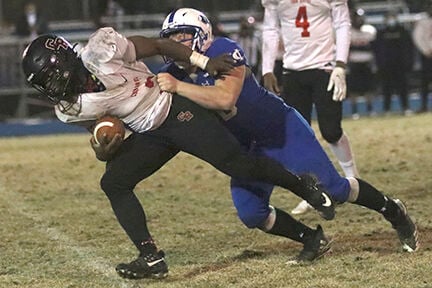 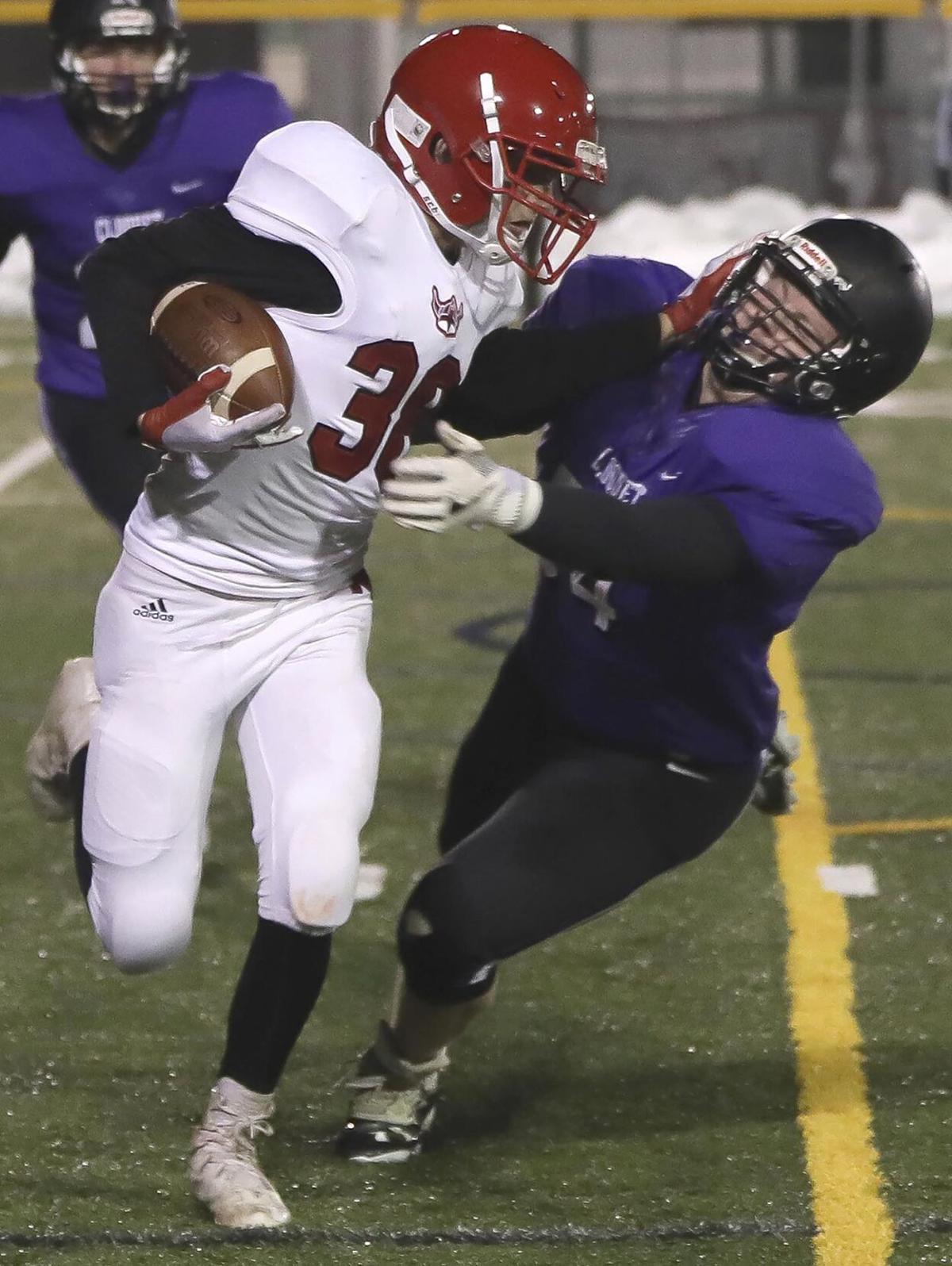 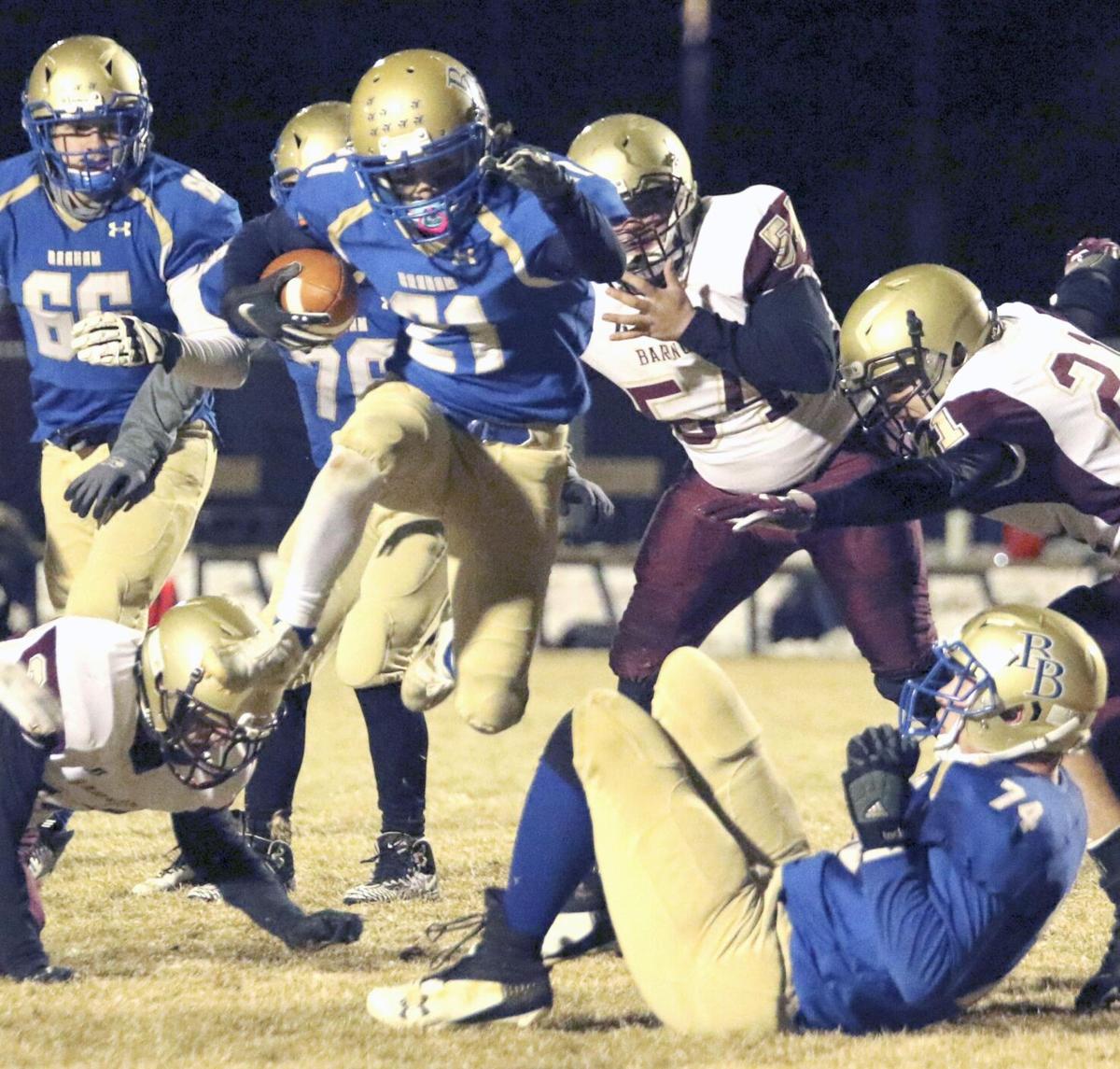 It is an oddity in sports when you see a team celebrating after receiving a second place trophy following a head-to-head competition. Under normal conditions, being named “runner-up” means they just lost the game to the champions. But as has been said way too many times recently, the 2020 high school sports season has been far from normal, so why stop now?

Because of multiple teams canceling their seasons due to COVID, both the Cambridge-Isanti Bluejacket and North Branch Viking football teams found themselves in section tournaments with only three schools able to compete. Originally, the plan was to have the #2 and #3 teams face each other on Thursday, Nov. 19, with the winner taking on the #1 seed for the championship.

That championship game was set for Wednesday, Nov. 25, with #1 seed Andover hosting the winner of C-I versus Coon Rapids, and #1 seed Hermantown taking on the winner of North Branch versus Cloquet. That was before Minnesota Governor Tim Walz intervened the night before the semifinal games were to take place, imposing a sudden and complete stoppage of all organized youth sports as of 11:59 p.m. on Friday, Nov. 20.

With that order firmly in place, that left sections with a decision of how to conclude their playoffs, knowing it was impossible to play more than one game before the four-week “pause” in sports. According to C-I Activities Director Mark Solberg, several options were discussed, including having the #2 seeds play the #1 seeds on Nov. 19, or possibly even holding a coin flip to determine who would take on the #1 seed. However none of those options seemed fair to any of the teams.

Therefore, just hours before kickoff, it was decided by unanimous agreement by all of the teams involved, the championship was simply handed to the #1 seeds, and the semifinal games would go on as scheduled, with the winners being rewarded with the section second place trophy. And once the dust had settled, both Cambridge-Isanti and North Branch came out victorious in those games, enabling the two teams to celebrate the fact they won the last game of the season.

C-I senior runningback Gaven Ziebarth had a high school career-ending befitting of someone who was named the top senior runningback in the state in the preseason. The University of North Dakota recruit ran roughshod over the Cardinal defense, amassing an incredible 344 yards and five touchdowns on 29 carries to lead the Jackets to the lopsided win.

Ziebarth didn’t own all of the long scores, as on the second play of the game, quarterback Connor Braaten connected with Andre Hall, who streaked down the sideline for a 67-yard touchdown that set the pace for the game. Ziebarth’s first two TDs made the score 19-0 at halftime.

Coon Rapids got on the scoreboard with their own one-play drive to start the second half, but Ziebarth’s second 70-yard dash, plus a Cyrus Mattson 13-yard rumble to the endzone extended C-I’s lead to 32-8. Another Cardinal touchdown made the score 32-14 at the end of the third quarter.

Ziebarth effectively put the game out of reach with his last two touchdown scores early in the fourth quarter, but Coon Rapids made the final score appear closer with a pair of scores, with a successful onside kick sandwiched in between.

North Branch certainly didn’t beat the Lumberjacks with unpredictable play-calling. The Vikings, playing their first game in three weeks, didn’t attempt a single pass the entire game. What was unpredictable, however, was which player would handle the ball as quarterback Andrew Thauwald deftly distributed the handoffs between Ashton Labelle (16 carries, 178 yards), Coral Loghan (13 carries, 69 yards), and himself (eight carries, 74 yards). The end result was five touchdowns, which coupled with five successful two-point conversions, carried the Vikings to the close victory and second place trophy.

North Branch never trailed in the game, and only allowed the Lumberjacks to tie the score twice - at 8-8 in the first quarter and 24-24 in the third. Thauwald’s first of two touchdowns started the scoring off with a 10-yard run with five minutes remaining in the first quarter. A quick, two play Cloquet drive tied the score before Labelle gave North Branch the lead again on a six-yard run to make the score 16-8 at the end of one.

Loghan picked up his lone score midway through the second quarter, but another Cloquet TD made the halftime score 24-16.

Cloquet’s second tie of the game midway through the third didn’t last long as Labelle dashed 41 yards to put North Branch ahead for good. Cloquet did threaten to tie the game up again late in the third, put their two-point conversion was unsuccessful, making for a 32-30 Viking lead going into the fourth.

Thauwald officially put the game out of reach on an 18-yard run two minutes into the fourth, giving North Branch a 10-point lead at 40-30. The final score of the game came on a Cloquet six-yard pass, but another unsuccessful two-point conversion resulted in the final 40-36 score as the game-ending Lumberjack drive came to an end on an incomplete pass on fourth and 13 from North Branch’s 46 yard line.

As opposed to other sections, Braham’s section initially had all eight teams ready to compete from the start. And while a couple teams did wind up forfeiting, Braham was able to play two playoff games before the end of the season was prematurely declared.

In their quarterfinal game, #4 seed Braham faced #5 seed Barnum, a team Braham was supposed to face in the regular season, but that game had been canceled. And it was the southern Bombers who were able to come out on top.

The two teams were tied up at 8-8 after the first quarter, with Braham’s score coming on a 16-yard touchdown catch by Zach Yerke. The remaining Braham scores came in the second quarter as a Carson Shockman 26-yard run and a Hayden Lee 41-yard run provided Braham with a 24-8 halftime lead, which was enough as Barnum could muster only one more touchdown in the second half to make the final score of 24-16.