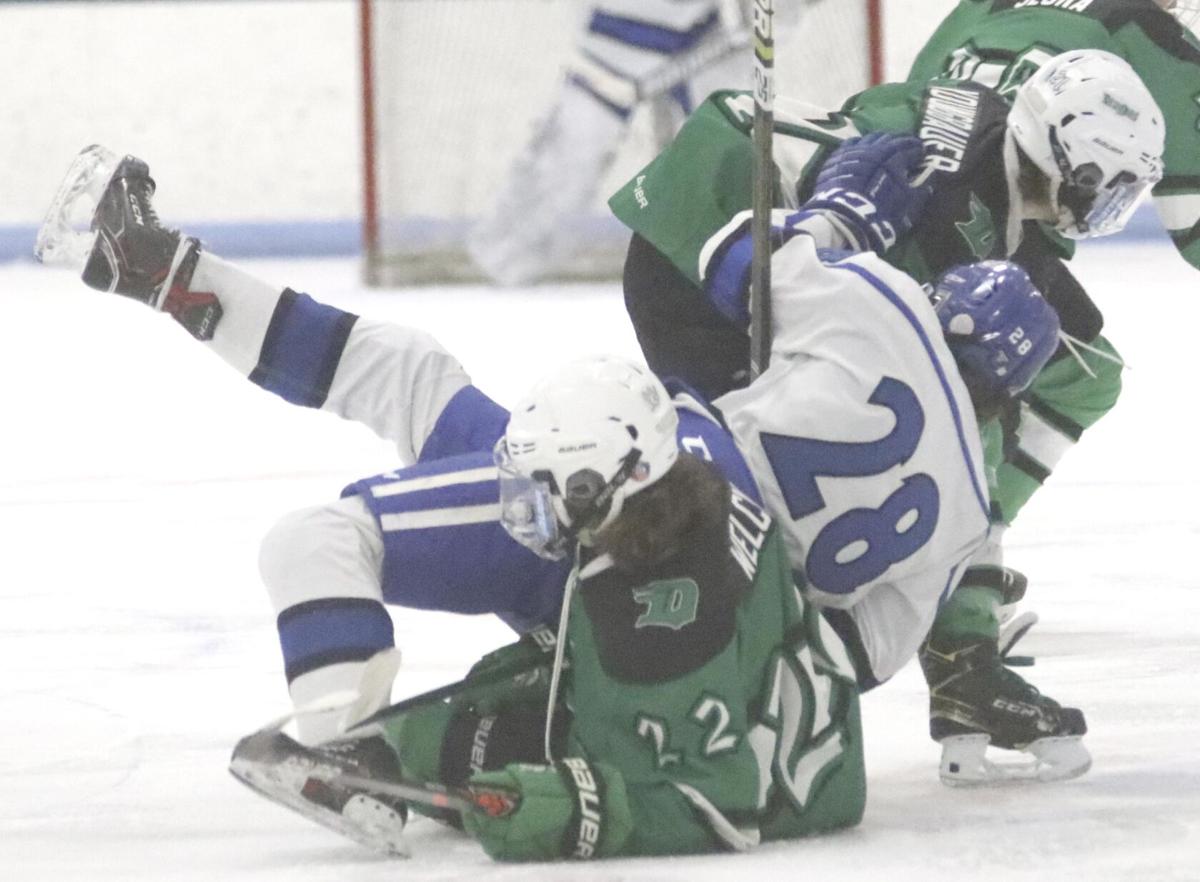 Cambridge-Isanti’s Jacob Ziebarth gets bowled over by a sliding Aidan Welch of the Dragons during the Jackets’ Section 5A game versus Pine City. The Dragons would down the Jackets 4-2. 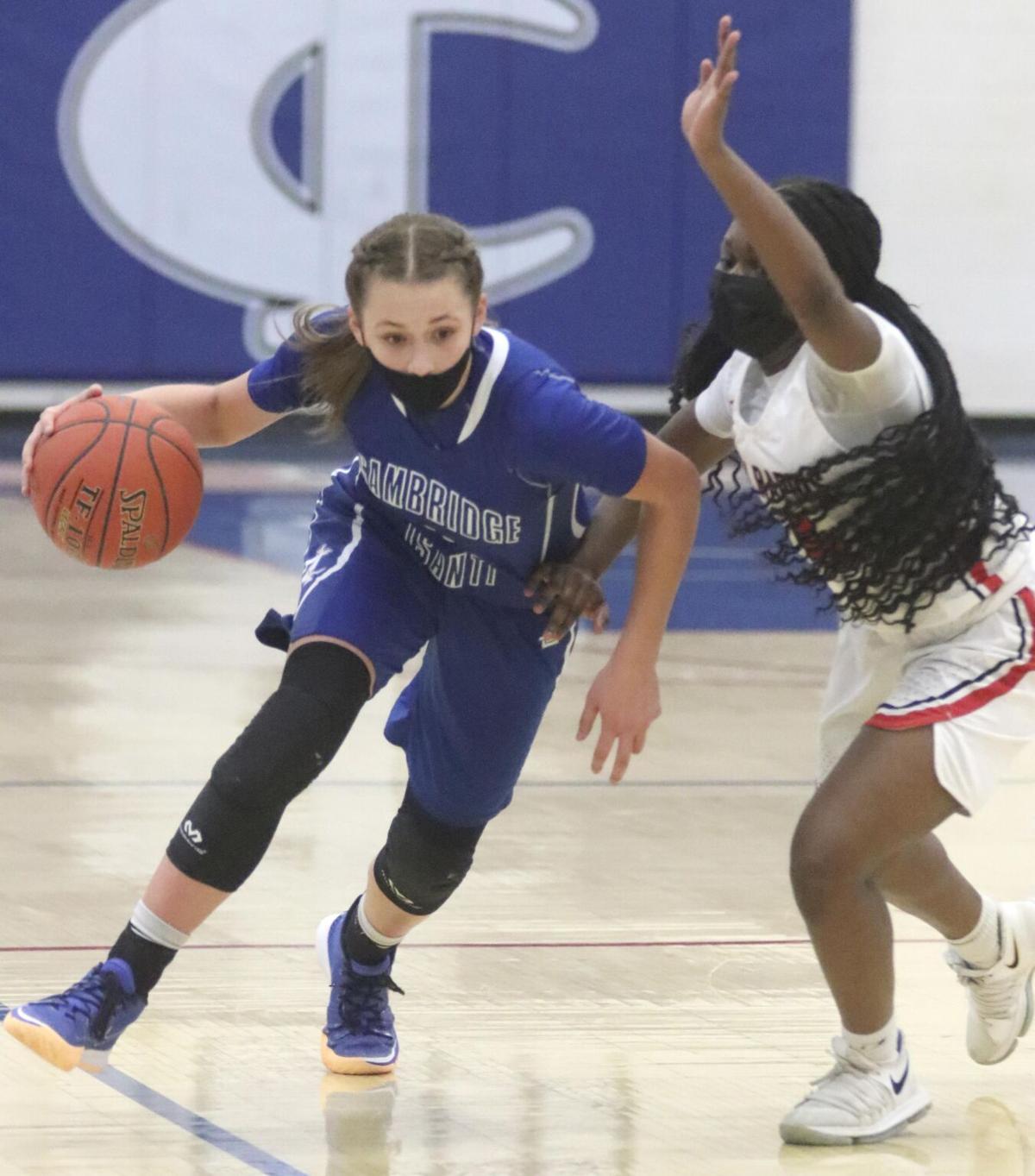 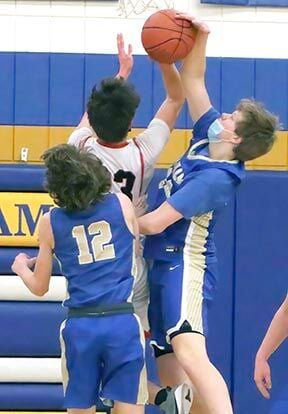 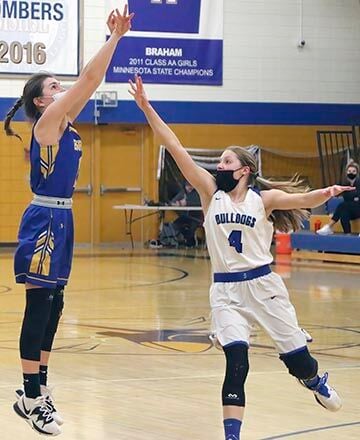 Braham’s Hannah Cornelius hits a three-pointer over the outstretched arm of a Swanville defender.

Cambridge-Isanti’s Jacob Ziebarth gets bowled over by a sliding Aidan Welch of the Dragons during the Jackets’ Section 5A game versus Pine City. The Dragons would down the Jackets 4-2.

Braham’s Hannah Cornelius hits a three-pointer over the outstretched arm of a Swanville defender.

After enduring the compressed regular season, the postseason wound up being short and not-so sweet for several area teams.

The Bluejackets entered the Section 5A tournament with their highest seeding in team history, but unfortunately couldn’t parlay that into a long postseason run, losing to Pine City 4-2 in the quarterfinals.

After engaging in a pair of exciting, high-scoring games that resulted in each team earning a 6-5 win during the regular, this “rubber match” was expected to be very entertaining. And while the total goals scored was lower this game, the fast-paced action kept the COVID-capacity crowd at the edge of their seats until the final horn. Both teams scored once in the first period, with the Dragons taking a 3-2 lead into the third period. The only scoring in the third period was an empty-net goal with just four seconds remaining to seal the win for the Dragons.

For North Branch, they were unable to even play their opening round game as the #8 seed against #9 seed Mora as the team had to pull out of the tournament due to COVID.

The Vikings found themselves on the wrong end of a hot-shooting team, as North Branch lost to Hibbing 77-33 in the Section 7AAA tournament. Hibbing jumped out to a 48-13 halftime lead before cruising to the win. Trevor Johnson had a strong game for North Branch, collecting 19 points. Unfortunately, he was the only Viking to even eclipse five points for the game.

After getting a first round bye in Section 5A, the Braham Bombers won a thrilling 74-62 overtime game over Hinckley-Finlayson in the subsection quarterfinals. The #3 East subsection seeds however would lose their next game 62-57 to Upsala two nights later.

Like the Viking boys hockey team, the Bluejacket boys basketball team saw their season end even before the opening tipoff as C-I had to pull out of their section quarterfinal game, resulting in Forest Lake automatically advancing.

The Viking girls also saw their season end in lopsided fashion, losing 67-37 to Chisago Lakes in the section quarterfinals.

The Vikings trailed 42-17 at halftime before seeing that deficit extend by five in the second half. Similar to the boys, a good chunk of the girls’ scoring came from one player, with senior Kate Carlson scoring 16 as the only Viking to reach double digits.

The Braham Bomber girls’ postseason was similar to the Bomber boys, with the team winning their opening round game, but then losing two nights later. Braham’s win came over Upsala by a score of 67-43. The loss was to Swanville 59-46.

The lone exception to the difficult postseasons is the Bluejacket girls basketball team, who have advanced to their third-straight section championship game.

After shockingly losing to Duluth East in their regular season finale last Tuesday, the Bluejacket girls made certain that wouldn’t happen twice in a week in C-I’s section quarterfinal game against the Greyhounds. The Jackets went out to a 33-20 lead at halftime, then slightly extended that lead en route to a 60-43 win.

In the semifinals, the Jackets faced #6 seed Coon Rapids, who had upset #3 seed Blaine. C-I wasn’t about to be the second upset victim of the Cardinals, as the Jackets built up a six-point lead at halftime and then extended that to come away with a 70-43 victory.

Aumer completely controlled the game, scoring 40 points. And when she wasn’t putting on a shooting clinic, the junior was dishing off inside, resulting in Maraya Wiltrout scoring 13.

For the third year in a row, the Jackets will battle Forest Lake for the Section 7AAAA championship. Tipoff is 7 p.m. on Thursday, March 25.