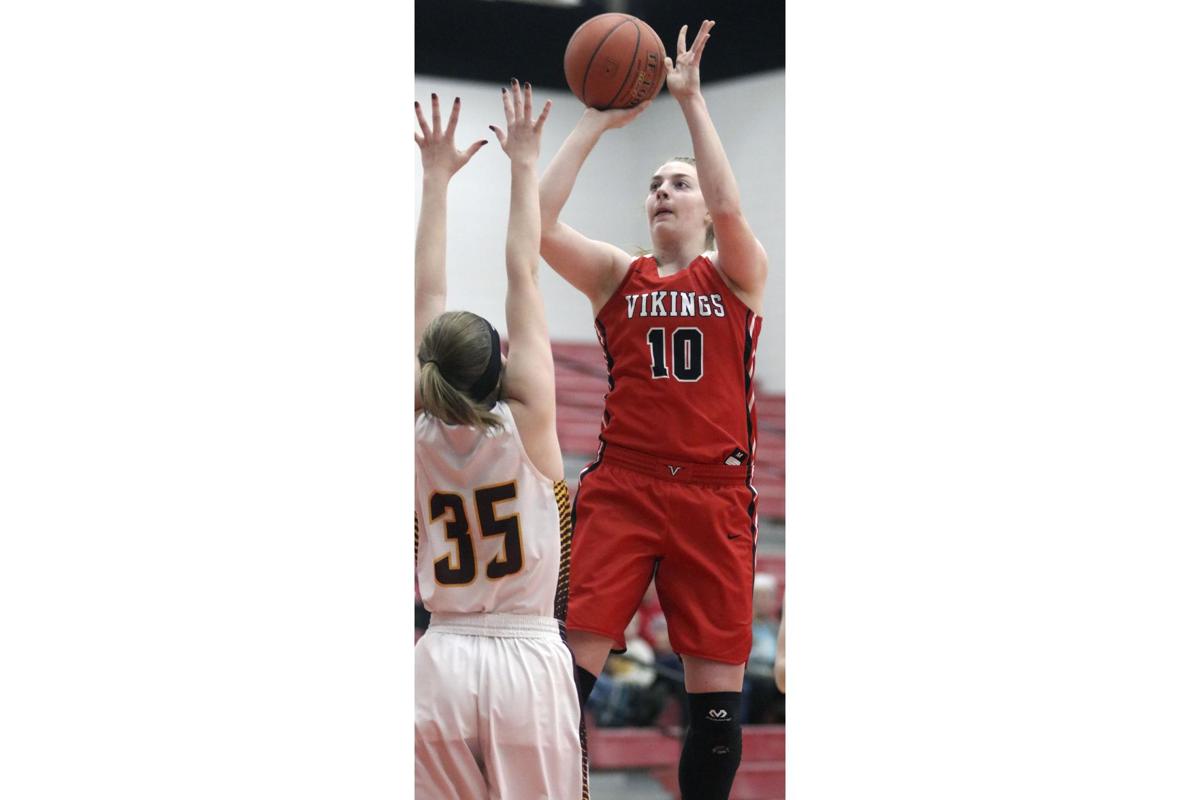 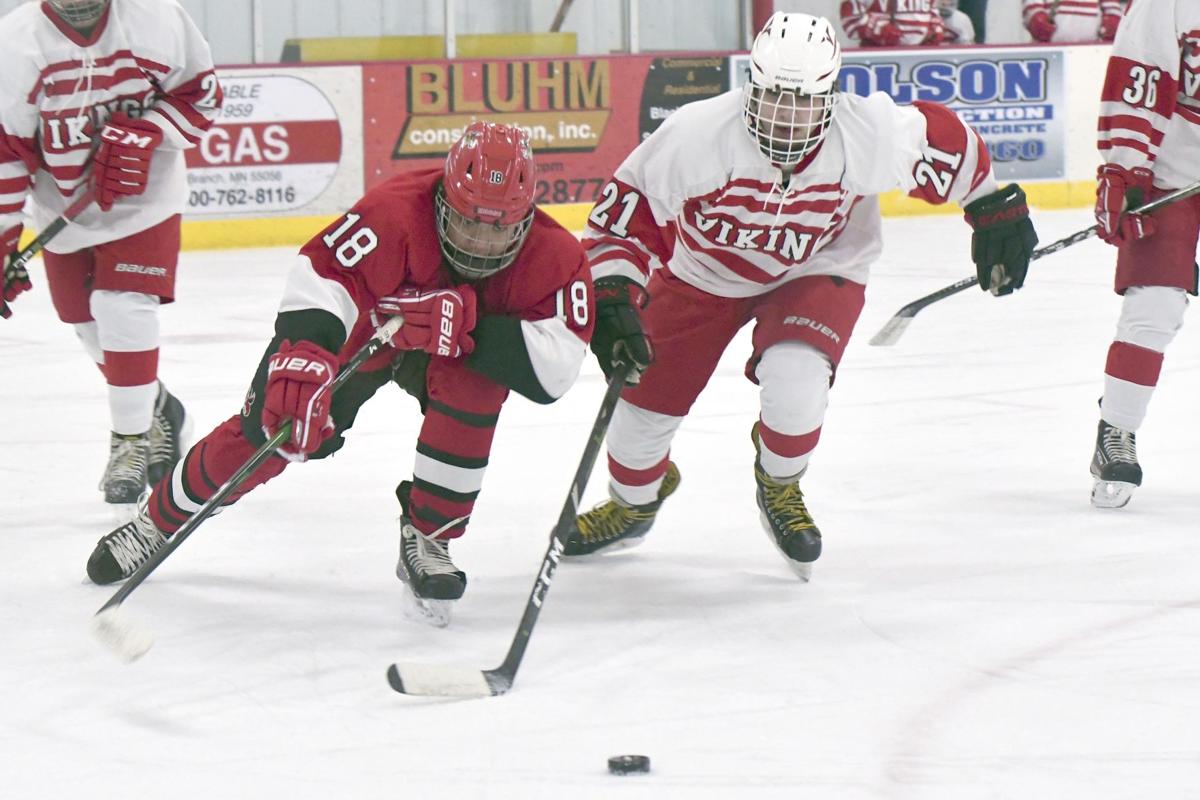 North Branch’s Nick Schmitt (#21) races for a loose puck with Monticello’s Daniel Homsombath during the Vikings’ game against the Moose on Thursday, Jan. 9. The Moose would get the best of the Vikings in the key match-up of section foes, winning 3-1.

North Branch’s Nick Schmitt (#21) races for a loose puck with Monticello’s Daniel Homsombath during the Vikings’ game against the Moose on Thursday, Jan. 9. The Moose would get the best of the Vikings in the key match-up of section foes, winning 3-1.

North Branch broke out of their short losing streak last week, and in the process started what they hope to be an extended winning streak at the midway part of the season.

The Vikings did suffer one more setback to start the week with a 84-61 loss to Princeton in what head coach Alison Trampe described as “an extremely physical game that at times got a bit out of control.”

The Tigers took a 10-point lead going into halftime, and more than doubled their lead to pull away for the win. The Vikings were led by Paige Peaslee, who had 24 points and 15 rebounds. Megan Bunes added 16 points in the loss.

Three nights later the streak came to an end as North Branch got back to playing their kind of basketball, topping St. Francis 66-49. The Vikings jumped out to a strong 14-point lead for a 35-21 score at halftime, then matched points in the second half to preserve the win. Kate Carlson had the hot hand with 22 points, with Peaslee showing her consistency by picking up 20 points.

Less than 24 hours later, the Vikings were back on their home court to create the current winning streak with a lopsided 64-29 win over Duluth Denfeld. North Branch utilized some strong outside shots to build a commanding 39-15 lead at halftime. Included in that barrage was a trio of three-pointers from Maddie Helin that broke the game open.

North Branch also showed its depth as the third different player led the team in scoring, with Megan Bunes’ 16 points paving the way against the Hunters. Again, it was Peaslee adding 15 points, with Carlson picking up 13, and Helin finishing with 11.

The Vikings now sit at 9-4 on the season with some tough games coming up against Becker, Hermantown and Cambridge-Isanti in the next week.

For basketball teams that lack overall height, the adage “live by the three, die by the three” becomes a common theme. That is exactly the case for the Vikings as the team has begun to struggle to find consistency with the long-range offense.

To start the week, North Branch put together their strongest full game and gave Section 7AAA favorite Princeton a run for their money before falling to the Tigers 77-70. Logan Murphy had a strong game by scoring 22 points and recording eight rebounds, four assists and taking eight charges for offensive fouls against the Tigers. Carter Whitman added 20 points, with Trevor Johnson adding 13 points.

The Vikings couldn’t keep that momentum going into the next game, however, as North Branch jumped out to a 31-20 lead early in the second half against St. Francis, but allowed the Saints to come back and collect a 63-47 win.

North Branch struggled from behind the arc, draining only 8 of 37 three-point attempts for the game. Carson Klein was the top scorer for North Branch with 11 points – all of which came in the first half. Johnson matched that number with 11 points of his own in the loss.

The Vikings lone game of the week was a key one as they faced section rival Monticello in a game that will have a significant impact on the section rankings. Unfortunately for the Vikings, the Moose controlled a majority of the game, handing North Branch a 3-1 loss.

All of Monticello’s scoring came in the second stanza as the Moose took advantage of a few fortunate bounces and scored two goals in 33 seconds to break the game open. North Branch’s lone goal came midway through the third period by Zach Larson, but that was as close as they could make it.

The Vikings still sit with a respectable 11-4 season record with key games against Pine City and a rematch at Monticello yet to come.

The Vikings participated in the Mounds View Duals on Saturday, Jan. 11, falling in all four matches.

The Vikings started off with two tough opponents, losing to Blaine 64-10 and Eastview 60-18. Their third-round match was a little closer, with North Branch losing to Orono 33-20. In the final match, they lost to Maple Grove 48-24.

In a homecoming meet for head coach Katie Krampitz, who competed in high school for St. Francis, the Vikings came up a bit short against the Saints by a score of 134.2-129.95. Paige Bauer claimed the only first place for the Vikings in the meet, winning vault with a 9.2.

The Vikettes wound up placing fourth in jazz and fifth in high kick in their lone competition of the week at Anoka on Saturday, Jan. 11.