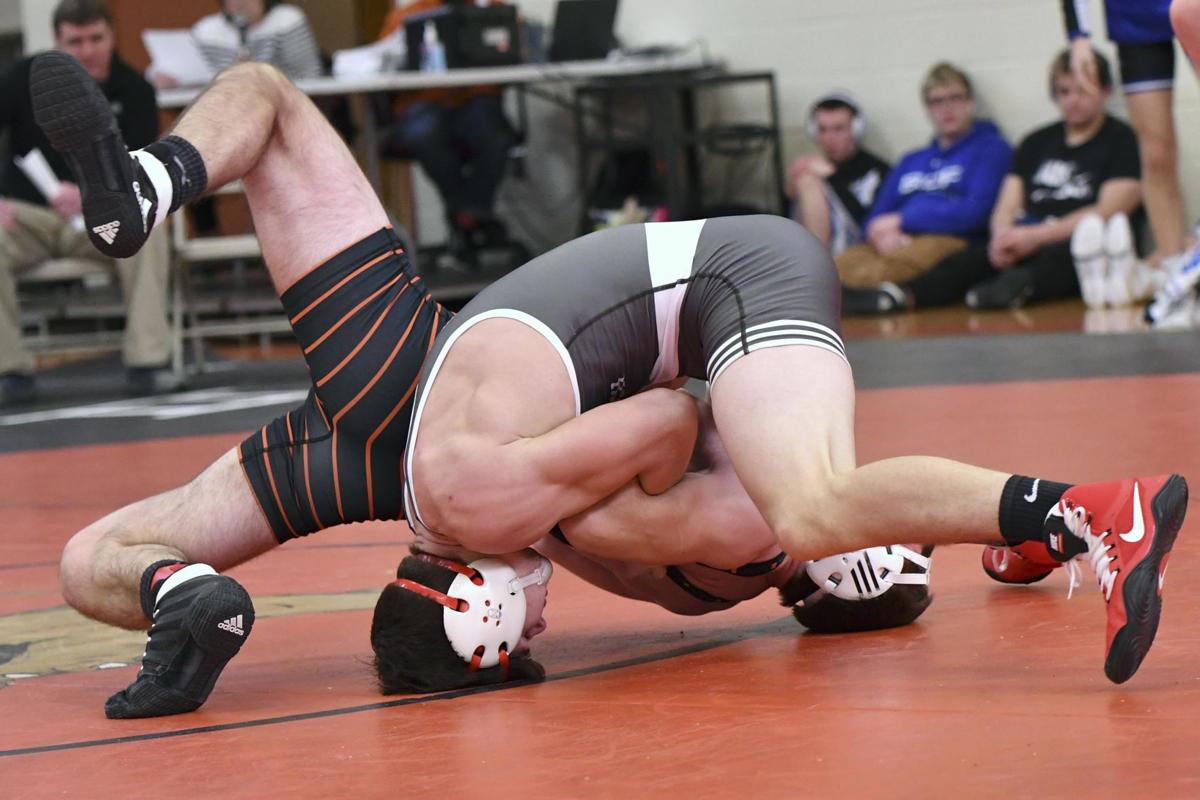 North Branch’s Austin Sonnek uses his head as a pivot point in order to gain additional leverage over his Park Rapids opponent and a potential pinfall during the opening round of the Oglivie Invite on Saturday, Jan. 4. Sonnek would get the pin late in the first period of the match en route to earning third place at 152 pounds. 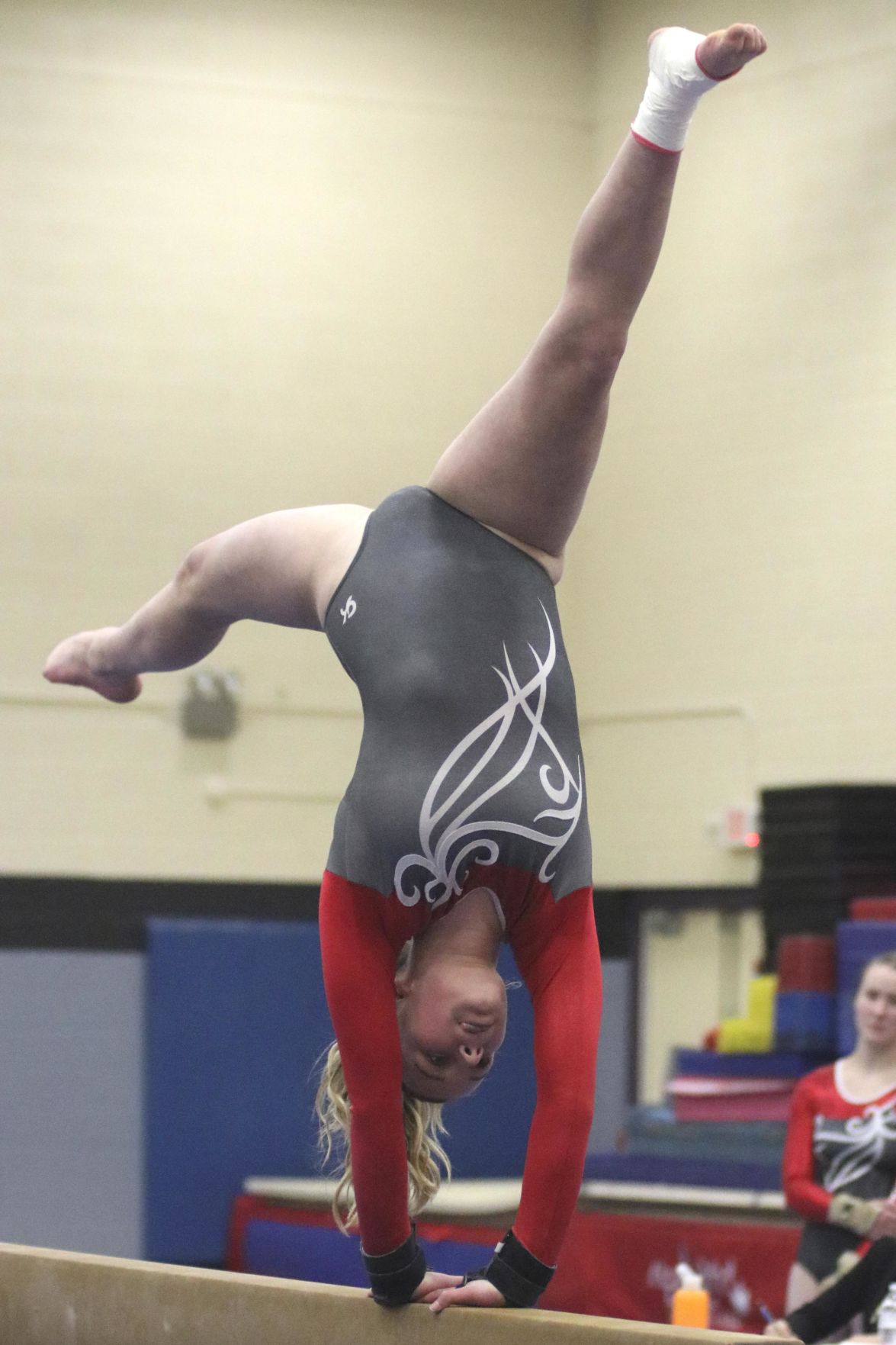 North Branch’s Libby Nielsen executes a back walkover on the beam during the Jan. 2 meet at Rush City.

North Branch’s Austin Sonnek uses his head as a pivot point in order to gain additional leverage over his Park Rapids opponent and a potential pinfall during the opening round of the Oglivie Invite on Saturday, Jan. 4. Sonnek would get the pin late in the first period of the match en route to earning third place at 152 pounds.

North Branch’s Libby Nielsen executes a back walkover on the beam during the Jan. 2 meet at Rush City.

North Branch started the calendar year off with a pair of decisive wins at home following the Christmas break.

First up was an interstate game against Superior, which the Vikings won 6-2. After exchanging goals in the first period, the Vikings controlled the second period by scoring four times, while only allowing one additional Spartan goal. North Branch put the icing on the cake with one additional goal in the third period. Cody Croal and Joey Kerchner each tallied a pair of goals in the game.

The following night featured the first of two games pitting the arena’s two “home teams” against one another in the form of North Branch versus Chisago Lakes. The game was also the first matchup of last season’s Section 5A championship game – won by North Branch.

While the atmosphere was still electric, the Vikings had a much easier time declaring this ice as “their house,” beating the Wildcats 5-2. North Branch scored the first four goals of the game, then kept Chisago Lakes in check, only allowing two Wildcats goals to claim the win. It was again two Vikings netting a pair of goals, with Kerchner again contributing two and this time Tucker Sachs also scoring two.

The Vikings picked up their first win of the season, coming out on top of a triangular featuring them going up against Rush City/Pine City/Hinckley-Finlayson and Grantsburg.

Coming out of the Christmas break with minimal practice time, a little bit of rust showed, along with some of the team having difficulty adjusting to Rush City’s equipment. The end result was a final team score of 127.825, compared to RPHF’s 127.1 and Grantsburg’s 119.725.

Two days later, the Vikings knocked off some of that rust, earning a team score of 132.15 in placing sixth at the Princeton Invite. Bauer continued to lead the Vikings, placing seventh all-around with a 34.6, which included a 9.2 on vault and 9.15 on floor.

The Vikings traveled to Ogilvie for an individual tournament, with one Viking taking first and two others coming in third on the day.

Josh Logan was the lone championship winner for North Branch, taking first at 132 pounds. Ashton LaBelle and Austin Sonnek each earned bronze medals at 145 and 152 pounds, consecutively. As a team, the Vikings finished in seventh place.

In their first game of the new calendar year, the Vikings were looking to end their short skid as they traveled to Grand Rapids on Friday, Jan. 3. Unfortunately, the outcome wasn’t what they hoped for as they lost to the Thunderhawks 55-39. The Vikings got off to a slow start in the game, scoring only 14 points in the first half to trail the hosts 25-14 at the break. North Branch had a slightly better second half, but still saw their deficit increase by five to produce the final score. Paige Peaslee was the top scorer for North Branch, collecting 13 points and 12 rebounds. Megan Bunes added 11 points in the loss.

North Branch currently sits at a record of 7-3 on the season, with all three losses coming in their last three games.

The Vikings saw their current losing skid extend to five games to start January, as North Branch traveled to Hibbing on Saturday, Jan. 4, falling to the Bluejackets 76-48. Hibbing jumped out to a commanding 26-point lead by halftime by a score of 46-20, with the Vikings only able to keep pace in the second half. Trevor Johnson was the lone Viking to reach double-digits, scoring 14 points.

North Branch now sits at a 3-5 season record after winning their first three games of the season.