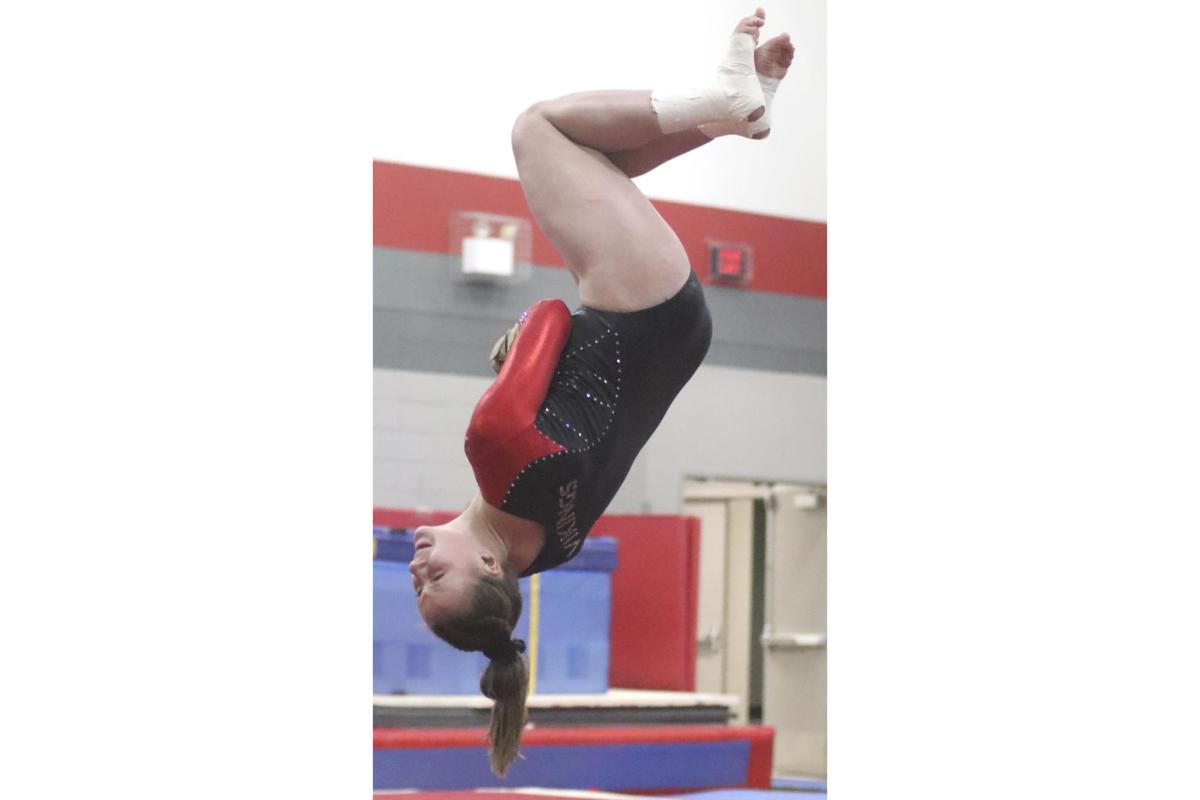 Junior captain Bekah Fish hits a tuck full twist during one of her tumbling passes on the floor during the Princeton meet. 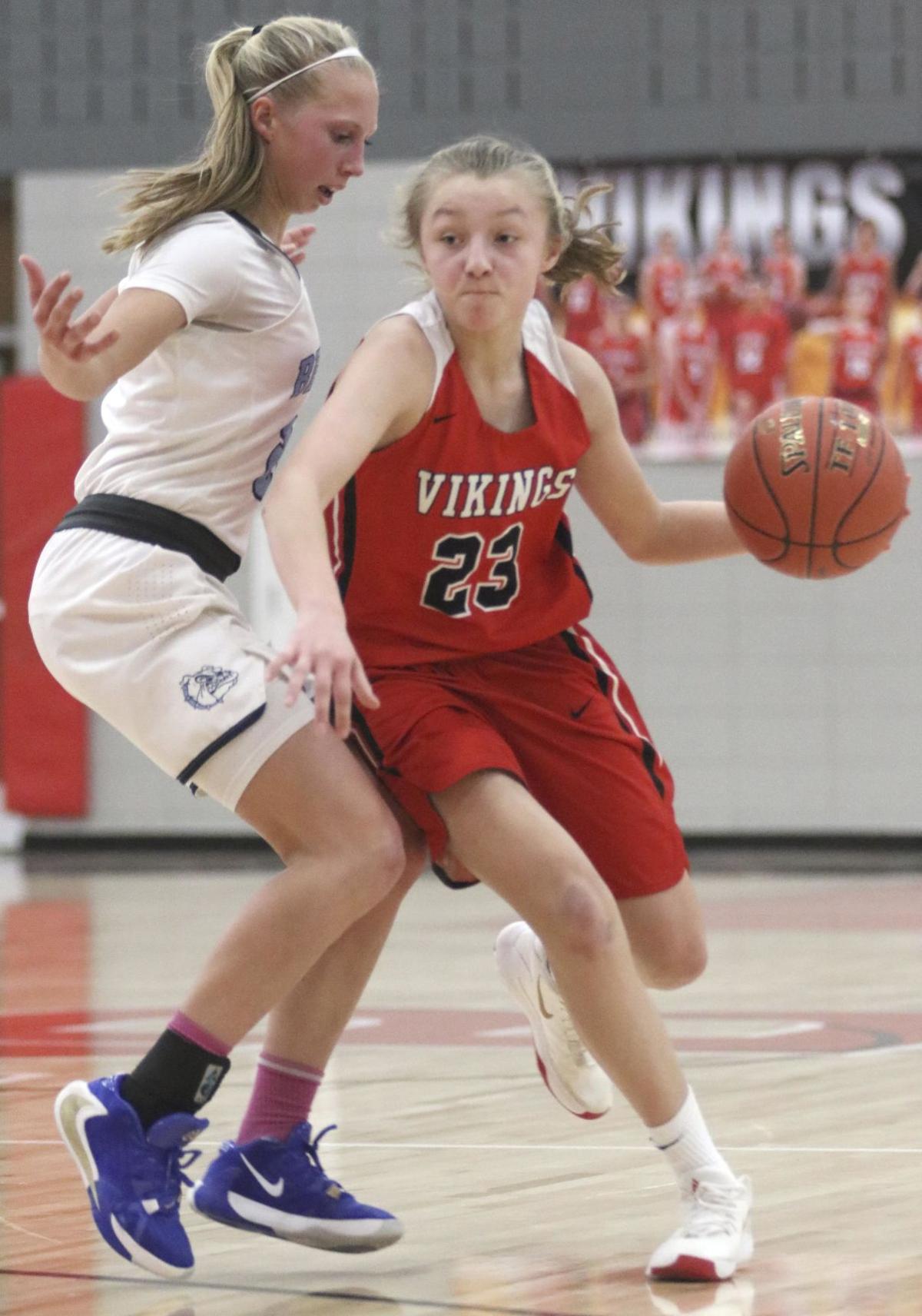 Ella Kuhlman, along with the rest of the Vikings, ran up against a staunch Becker defense during their game on Monday, Feb. 3.

Junior captain Bekah Fish hits a tuck full twist during one of her tumbling passes on the floor during the Princeton meet.

Ella Kuhlman, along with the rest of the Vikings, ran up against a staunch Becker defense during their game on Monday, Feb. 3.

The Vikings tumblers appear to be peaking at just the right time, as they shattered their season-high team score during their final regular season meet on Tuesday, Feb. 4, in defeating Princeton 137.525-126.1.

North Branch swept the top three all-around places in the meet, with Dakota Esget taking first with a 35.95, Paige Bauer taking second with a 35.025 and Bekah Fish taking third with a 34.8.

The three gymnasts alternated taking first on the four events, with Bauer claiming first with a nice 9.4 pike tsuk. Fish took first on the beam with a no-fall 8.9 routine. Esget captured the top bars score with an 8.8 and floor score with a 9.45.

The Vikings now look towards the Section 7A meet this Saturday, Feb. 15, in Big Lake. While the team has little chance to claim the team title (host Big Lake is the #1-ranked team in Class A), the team hopes to get an individual or two qualified for the state meet.

The start time for sections was moved from noon to 5 p.m. on Saturday due to a lack of available judges.

On Tuesday, Feb. 4, the Vikings defeated Brooklyn Center in a game that featured five Vikings reaching double-digit points. Katelyn McAbee came off the bench to lead North Branch with 17 points. Megan Bunes, Kate Carlson and Maddie Helin were right behind her with 15, 14 and 13 points, respectively. Chloe Lattimore rounded out the scoring with 10 points.

Three nights later, despite an injury to forward Paige Peaslee, the Vikings battled Princeton tough before losing 68-53. North Branch whittled the Tiger lead down to just three points with five minutes to go in the game, but a Tiger run clinched the game. Carlson led North Branch with 19 points, with Bunes adding 15 in the loss.

North Branch just can’t quite get over the hump in stopping their nearly season-long skid, falling twice last week.

On Tuesday, Feb. 4, North Branch dropped a close game to Sauk Rapids 81-78, despite what head coach Alex Kuhlman described as “the best and most complete game we played all year – other than the last 1:30 of the game.”

The Vikings held a slim lead until that point, but a 9-0 run by the Storm snatched defeat from the jaws of victory. Trevor Johnson led the team with 31 points in the game.

Three nights later, the team faced a strong Princeton squad, falling to the Tigers 99-69. Drew VanEerden was the leading scorer for North Branch with 15 points.

Injuries have hit the Vikings at just the wrong time, with their starting goalie Jake Turek and forward Dawson Johnson suffering lower body injuries. The result was three straight losses to section foes.

First came a 5-3 loss to rival Chisago Lakes. Next came a 7-1 defeat at the hands of Monticello. The week concluded with a 5-1 loss to Princeton.

The Chisago Lakes game was the only one where North Branch held the game close, with the two teams tied 3-3 going into the third period. However, a power play goal and an empty-netter sealed the deal for the Wildcats.

The Vikings finished their regular season with a triangular and a quadrangular, losing all five of their dual matches.

On Tuesday, Feb. 4, the team made the short trip up I-35 to Rush City. There, they fell to Centennial 48-36 and Rush City/Braham 45-36. Josh Logan and Brandt Bombard were the only two Vikings to pick up contested wins in both matches.

Three days later, North Branch traveled to Zimmerman, falling to Milaca-Faith Christian 48-28, Princeton 66-12 and Zimmerman 52-30. Interestingly, all but one of the Vikings’ wins came via either pinfall or technical fall (building up a 15-point lead). The other win came via forfeit.

The Vikings now look ahead to the section tournaments coming up this and next weekends. For the team tournament, North Branch will face St. Paul Johnson in the first round, with the winner taking on Mahtomedi, the #2 seed. The tournament takes place at Mahtomedi on Saturday, Feb. 15.