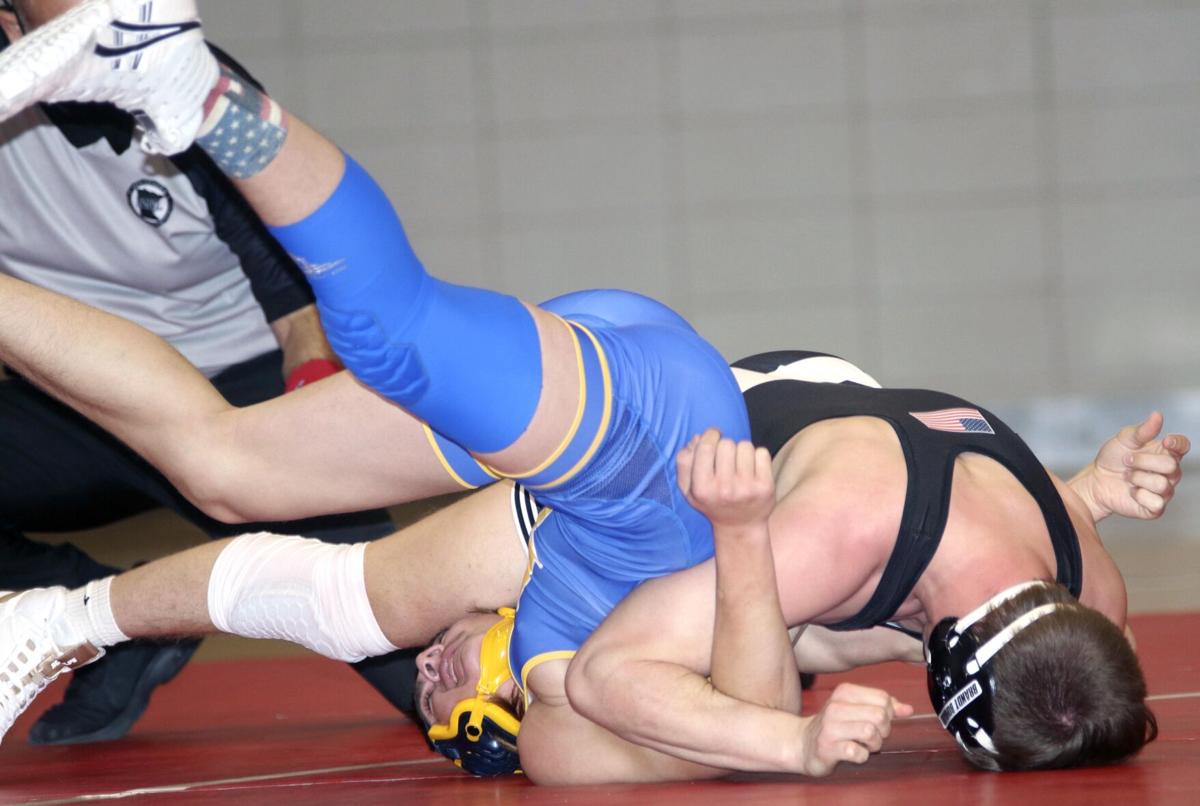 North Branch’s Brandt Bombard rolls up his Rush City/Braham opponent for a pin during the Vikings’ match on Friday, Jan. 22.

The North Branch dance team performed in their only home meet of the season on Saturday, Jan. 23. 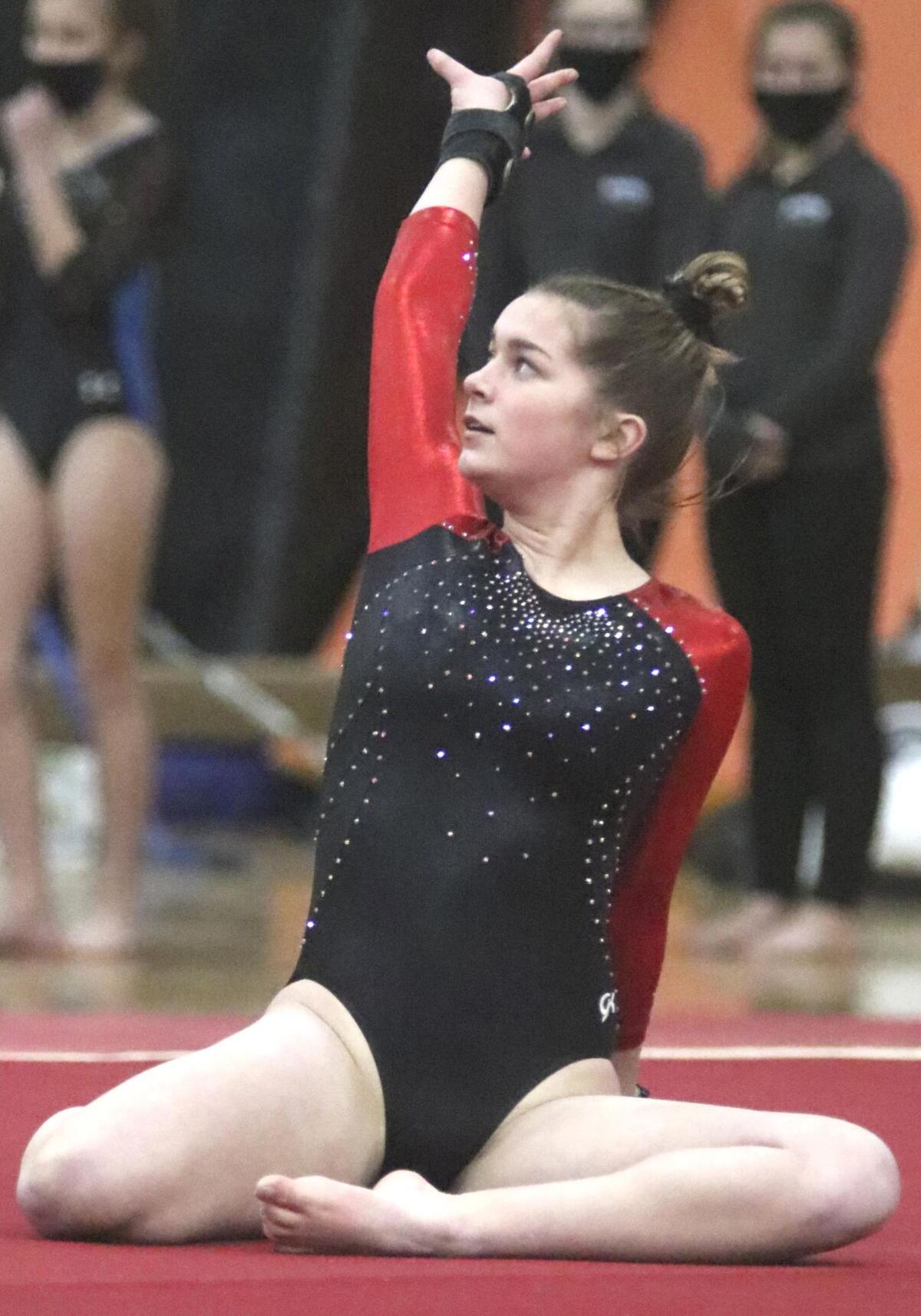 North Branch’s Libby Nielsen hits her finishing pose during her floor routine during the Vikings’ home and season opening meet on Friday, Jan. 22. North Branch would get their season off on the right foot, topping the Bulldogs 131.175-126.125.

North Branch’s Brandt Bombard rolls up his Rush City/Braham opponent for a pin during the Vikings’ match on Friday, Jan. 22.

The North Branch dance team performed in their only home meet of the season on Saturday, Jan. 23.

North Branch’s Libby Nielsen hits her finishing pose during her floor routine during the Vikings’ home and season opening meet on Friday, Jan. 22. North Branch would get their season off on the right foot, topping the Bulldogs 131.175-126.125.

The Vikings experienced a mixed bag of emotions for their season-opening meet, with some tears of frustration over skills that haven’t come back yet following the long delay to the season, but then smiles of satisfaction over some quality performances as North Branch topped visiting Becker 131.175 - 126.125.

Senior Paige Bauer had the top vault (9.375) and all-around (33.850) scores in the meet. 8th-grader Dakota Esget was right behind her teammate in the all-around, scoring a 33.5. Esget also earned first on the floor with an 8.675 and bars with an 8.7. Bekah Fish completed the first-place sweep by earning an 8.7 on beam.

The Vikings remained undefeated in the season last week, picking up victories over St. Francis and Becker/Big Lake.

North Branch continued their torrid scoring, netting eight goals in both games en route to an 8-6 win over St. Francis and an 8-2 win over Becker/Big Lake. Against the Saints, North Branch had leads of 4-1, 5-2, 6-3, and 8-5 before the final horn sounded. The scoring was very balanced, as only Brady Verdon collected two goals in the game.

Against the Eagles, North Branch peppered their goalie with 46 shots, compared to just 22 shots on Viking goalie Luke Opdahl. Tucker Sachs earned the hat trick with his three goals, and Lawton Garin picked up two to lead the Vikings’ scoring attack.

North Branch picked up a huge win against Cambridge-Isanti to start their week, but then lost a heartbreaker to rival Chisago Lakes to end the week.

Against the Jackets, both Adam Rehm and Trevor Johnson scored 18 points to lead North Branch, with Carson Klein adding 11, as the Vikings held the normally high-scoring Jackets to just 11 points in the first half and 33 for the game in the 65-33 win. This was the first time since 2001 the Vikings had been able to top their neighbors to the west.

Unfortunately, North Branch couldn’t sustain that emotional high as they lost to the Wilcats 48-47. Logan Murphy was the lone Viking to reach double digits, scoring 11 points in the loss.

The Vikings have struggled the first part of the season to find a new identity after losing players from last season’s squad to graduation, moving away, and injuries. Last week, those struggles continued as North Branch lost to Cambridge-Isanti and Chisago Lakes.

Against the Jackets, North Branch did see balanced scoring from three of their players, but unfortunately that accounted for all but five of the team’s points in a 65-43 loss. Kate Carlson led the team with 15 points, while Ella Kuhlman had 12 points and Maddie Helin added 11.

The story was more of the same against the Wildcats, as those three accounted for all but one point, with Kuhlman this time being the leading scorer with 12 points.

The Viking grapplers wound up only having one match last week after Chisago Lakes pulled out of their match. As a result, their only action of the week was against Rush City/Braham, who came away with a 42-24 win over the Vikings.

It was a quick evening for the two teams, as the first five weights were all forfeits by one or both teams, along with forfeits at three other forfeits. Plus, the matches that were contested all ended in falls, with none of them making it to the third period. Picking up pins for the Vikings were Josh Logan, Brandt Bombard, and Tanner Cummings.