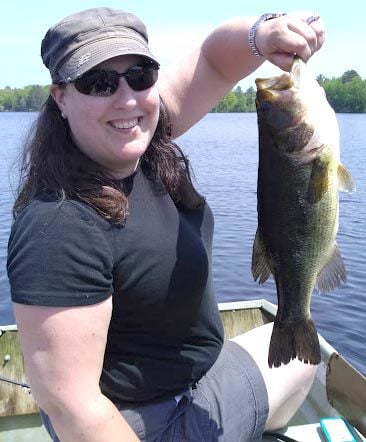 During a recent fishing trip, the author’s daughter, Brenda, caught a nice, 18-inch largemouth bass on her favorite lure... 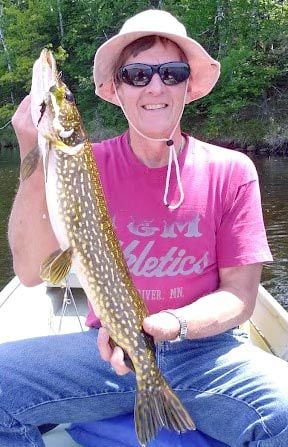 During a recent fishing trip, the author’s daughter, Brenda, caught a nice, 18-inch largemouth bass on her favorite lure...

Perhaps no one relishes a fishing trip more than my daughter Brenda. Unfortunately, her job doesn’t allow much freedom to pursue the lunkers of which she frequently dreams. Sound familiar?

So, it was extremely exciting when, in mid-May, she and I planned a fishing day for June 4.

Now Brenda and I have fished on many very nice days. We’ve also endured nasty weather. I am frequently reminded of the time some 20 years ago when we ventured out on a windy, drizzly 48-degree fall day, bundled to the gills in winter clothes and draped with rain gear.

Oh, we caught crappies that day! However, when her lips turned blue and her teeth refused to stop chattering, we quit and went to town for pie and coffee! It was a good decision.

As June 4 approached, my eyes focused on the weather forecast, universally known for its hit-and-miss accuracy. Temps were expected to be in the mid-70s with some sun and a slight chance of a storm. When the day arrived, it was just that way. Nearly perfect!

We left Braham shortly after 9:30 a.m., and by 11:15 we were in the boat. I manned the oars while Brenda hooked on her favorite plastic popper, the lure I knew she’d start with and stay with 95% of the day. Within a few minutes, an aggressive largemouth smashed the popper. She expertly brought it in, unhooked it, posed for a photo and released the 12-inch beauty. Nice start for sure!

For the next two hours, she caught and released a few more bass (including an 18-incher, see photo), while I used a large, white plastic twister tail to subdue a couple northerns and two or three bass. One of the northerns was a 28.5-inch “monster”(see photo), which I released. I also nabbed several panfish with my ultralight combo.

We were doing well, and a pause for lunch at 1:45 was definitely welcome.

Over the years, fishing has brought many unusual experiences. Timing and luck are often critical factors if one is to become part of a scene only a vivid imagination can create. Little did we know another was about to take place.

It was about 2:45 when I was again on the prowl with my ultralight. My lure was a small pink tubejig, stuck on a 1/16-ounce jighead, with thin white plastic streamers flailing about behind. It is, hands down, my go-to panfish bait. (Oh, the secret’s out!)

After catching several small sunnies, a larger one took the jig, and as I began reeling it in, a northern grabbed the sunfish, broke the surface of the water, and then made a dash for the depths. I lightened my drag and let it go. It was a big fish, and a buggy whip rod with 4-pound line is not recommended equipment for something like this!

After several minutes, I finally got the fish near the boat. It was huge, perhaps 32-35” long. It had the sunny locked in its jaws, but it was the sunny that had the hook in its mouth!

The northern must have gotten spooked when it saw us, for it casually released the sunfish and disappeared. I unhooked the scarred sunny and, wishing it well, put it back in the water.

The BIG one had indeed gotten away, but more important is the memory of another outstanding day with a top-notch fishing pal. I’ll have that forever!

Loren Brabec is a contributing sports writer for the Isanti-Chisago County Star and author of several Braham sports books.