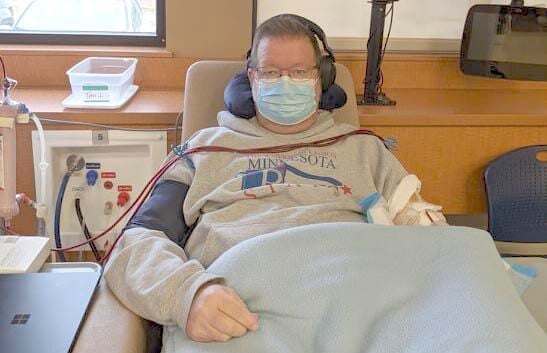 Tom Johnson, of Cambridge, relaxes during one of his five-hour dialysis treatments in Wyoming in 2020. Johnson was diagnosed with kidney disease in 2015 and is currently on dialysis while waiting for a transplant donor. 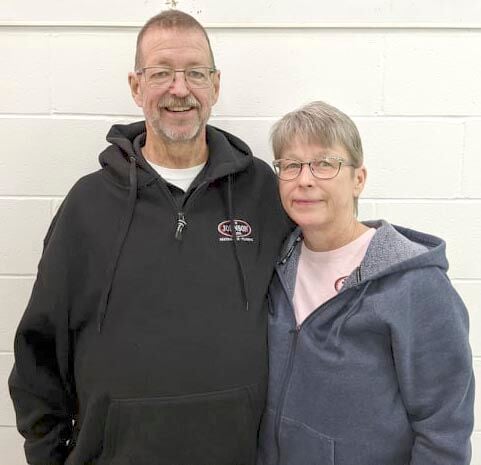 Tom Johnson and his wife Corrie work together in the office at Tom’s business, TM Johnson Bros., Inc., amid his three weekly dialysis treatments for kidney disease.

Tom Johnson, of Cambridge, relaxes during one of his five-hour dialysis treatments in Wyoming in 2020. Johnson was diagnosed with kidney disease in 2015 and is currently on dialysis while waiting for a transplant donor.

Tom Johnson and his wife Corrie work together in the office at Tom’s business, TM Johnson Bros., Inc., amid his three weekly dialysis treatments for kidney disease.

For most of us, it’s hard to admit when we have a need. We’re hardy Minnesotans descended from tough Scandinavians or scrappy Germans, and we’re doing just fine, thank you. But Tom Johnson, of Cambridge, has found that sometimes you have to give people a chance to help you out.

In 2015 Johnson, 58, applied for life insurance, and the accompanying physical revealed he was in the beginning stages of kidney disease.

“I ended up down at the (University of Minnesota),” he said, “and they did a biopsy of my kidney, and then that ended up at Harvard Medical School, where the final diagnosis was made. It’s fairly uncommon — called a ‘thin basement layer.’”

Both kidneys had the disease, which didn’t cause him any pain, but the function of his kidneys began to slowly deteriorate. At that early stage, there was no treatment available, and by 2019 he became symptomatic.

“I was fatigued, low on energy,” Johnson recalled, “because the toxins weren’t getting out of my body. It was slowly poisoning me.”

By March of 2020, Johnson’s kidneys were functioning at such a reduced capacity — currently they’re at about 9% — the decision was made to start dialysis.

Every Monday, Wednesday and Friday, he dons sweatpants and sweatshirt to leave home by 4:45 a.m. to travel to Wyoming to DaVita, a company with more than 2,600 dialysis centers nationwide.

“I’m able to sleep during dialysis and time goes faster,” Johnson said. “You’re sitting basically in a chair, lying in a recliner, for four-and-a-half hours.”

He’s had a “fistula” surgically created in his bicep; an artery and a vein were stitched together to create two access points where blood can cycle out, through the machine for cleaning, and back into his body. The process makes it difficult to regulate his body temperature.

“It feels like you’re cold from the inside out, which is not a very comfortable feeling,” Johnson said. “I have a heated vest I wear during dialysis to try and stay warm, plus a blanket on.”

GETTING BY WITH HELP FROM FRIENDS

The challenges of dialysis were a solid starting point for Johnson in letting others help him out. In addition to his kidney trouble, doctors found through rigorous testing an aneurysm on his aorta. In December of 2020, he underwent open heart surgery to repair it, requiring months of recovery.

For three months, Johnson couldn’t drive himself to dialysis, so a group of four men from his church, North Isanti Baptist, took turns getting him there and back.

“When you have people like that in your life, it’s very humbling,” he said. “That was a huge blessing.”

During that time and even now, Johnson relies on help from his wife Corrie and others to run TM Johnson Bros. Inc., the plumbing and furnace repair company he and his brother took over from their father in 1993, and Johnson has owned since 2015.

“The spouse has to pick up the slack and that can be pretty challenging,” he said. “Where you normally share doing things, for awhile I couldn’t share them and she had to do it all – even help me put my socks on.”

According to Johnson, he will need to stay on dialysis for the rest of his life unless a kidney donor can be found – alive or not.

“I’m hoping for a live donor,” he said. “We all have two kidneys, and you can survive very well on one, so it’s a matter of finding a match.”

Tests have shown Johnson is a “universal recipient” for a transplant, able to match about 60% of the population. His wife is a match, but surgeons wouldn’t allow it since she’s much smaller in stature than he is. The kidney wouldn’t be able to perform as it should.

“I’ve had four people that have been tested, but unfortunately, none of those four were eligible to donate for various reasons,” he said. “One of them matched, but had kidney issues he wasn’t aware of. In a roundabout way, it was a blessing.”

Johnson is currently on a national transplant list for deceased donors, but a typical wait is five to seven years. The demand is so much greater than the supply.

There are agencies that offer strategies for finding live donors, but no nationwide database exists. It all comes down to the recipient doing whatever they can to locate a donor.

“I don’t want to pressure people into something that they don’t feel moved to do,” Johnson said. “I think it’s a very personal decision.”

EASIER THAN YOU THINK

Johnson has found that people he meets have lots of misconceptions about being a kidney donor.

“For a donor, it’s a relatively minor surgery,” he said. “They do it arthroscopically. The donor’s usually back to work in a week, and basically fully recovered in six weeks.”

For the recipient, it requires a full, open-chest surgery with more recovery time and a unique result: three kidneys. Johnson said there’s more trauma to the body by taking out the recipient’s kidneys, so the new one is simply grafted in.

“The original kidneys don’t cause problems, typically, even after they shut down completely,” he said. “They just become benign.”

To top it all off, the recipient’s insurance pays all medical costs associated with the procedures for both themselves and their donor, even if the donor has no insurance.

ONE OF MANY IN NEED

What has surprised Johnson the most on this journey is the number of people he’s come across with the same need.

“At the one dialysis center I go to, there are roughly 65 people in that one center, and that’s just Wyoming, Minnesota,” he said. “There are literally tens of thousands across the country that are in need of kidney donation.”

According to www.organdonor.gov, more than 91,000 people were waiting for kidney transplants in 2020.

“I believe God has somebody out there for me,” Johnson said, “but it’s up to me to kind of do the legwork to find that person.”

A good place to start for information on becoming a donor is www.kidney.org, the website for the National Kidney Foundation. Johnson himself will answer questions at 612-685-7512.

And he’ll let you in on a secret: “In all of our walks of life, we know somebody who could use a kidney donation,” he said. “A lot of them probably don’t tell you about it.”

Johnson often sums up the need and the solution for those awaiting transplants with an analogy he heard.

“If you have two lifejackets on and you’re on a ship,” he said, “and someone is drowning out there, are you willing to throw them one to save their life? If we can live fine on one kidney, everybody has the ability to consider donation – not necessarily for me, but for someone.”