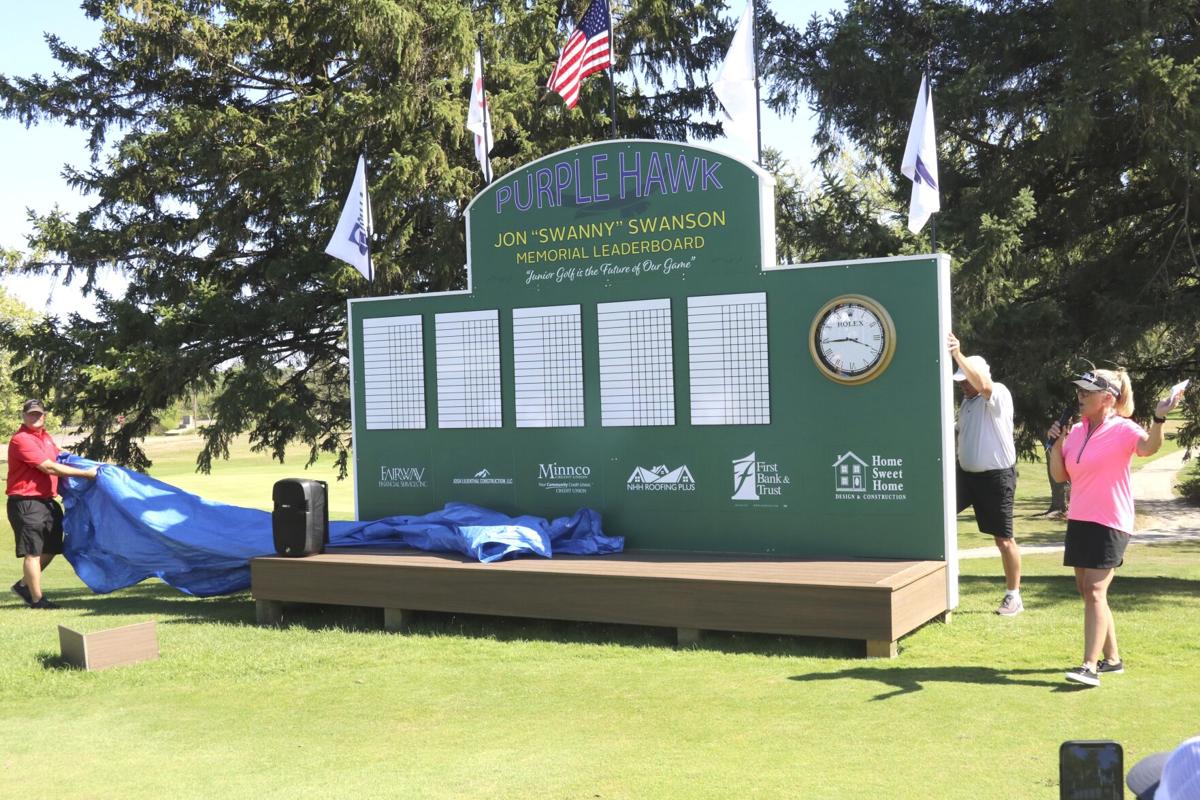 The new Purple Hawk leaderboard, dedicated in the memory of Jon “Swanny” Swanson, was officially unveiled during a ceremony on Saturday, Aug. 14. 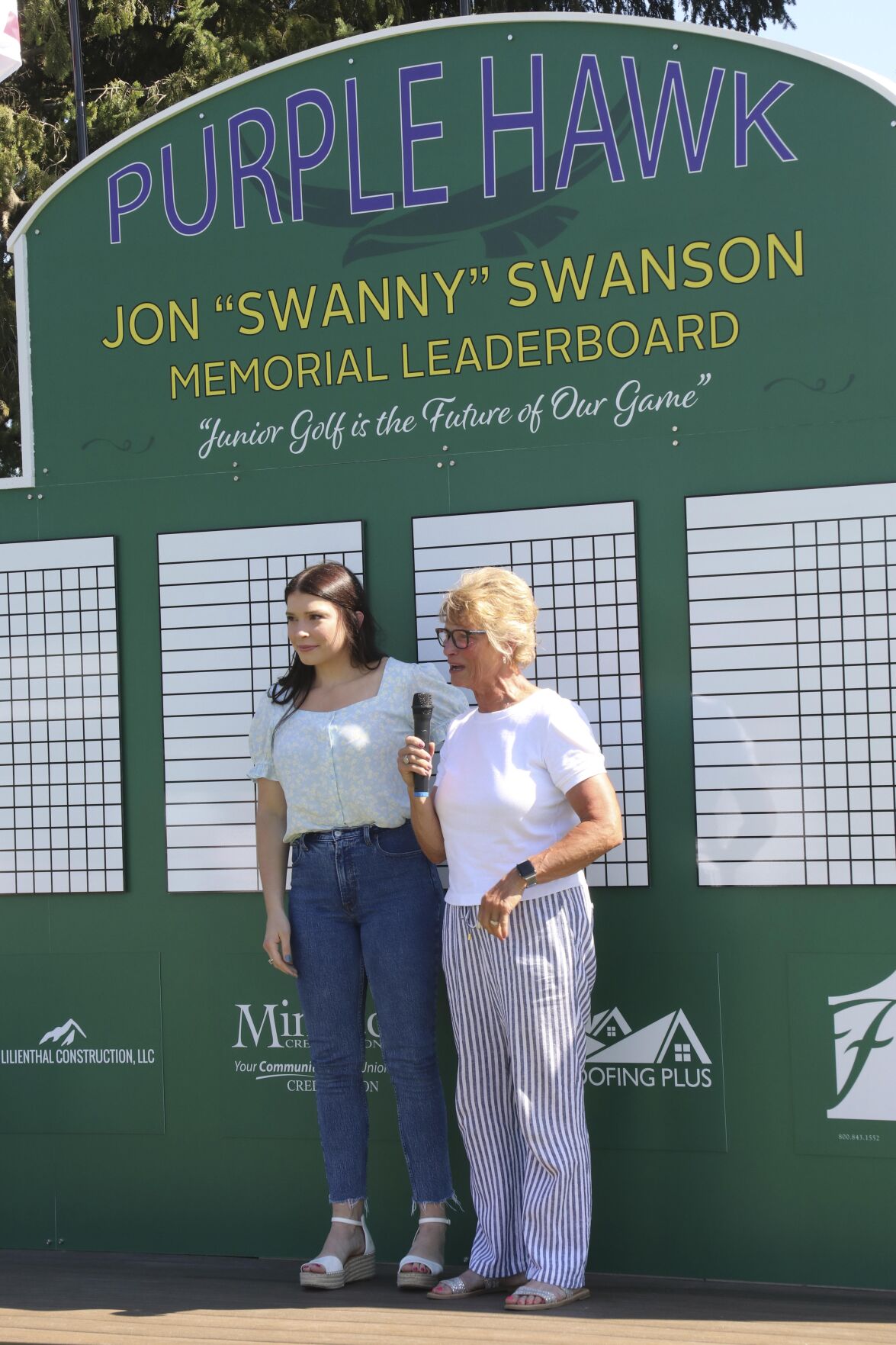 Jon “Swanny” Swnson’s daughter, Lauryn, and wife, Kathy, express their appreciation for the new Purple Hawk Country Club leaderboard that was erected in honor of the late golf pro.

The new Purple Hawk leaderboard, dedicated in the memory of Jon “Swanny” Swanson, was officially unveiled during a ceremony on Saturday, Aug. 14.

Jon “Swanny” Swnson’s daughter, Lauryn, and wife, Kathy, express their appreciation for the new Purple Hawk Country Club leaderboard that was erected in honor of the late golf pro.

The definition of a golf pro is in essence someone who is a leader of a golf course or country club. Based on that, what could be more appropriate than dedicating a leaderboard in the memory of what many considered to be the ultimate leader in the history of the Purple Hawk? During an emotional ceremony held on Saturday, Aug. 14, that is exactly what was done at the country club located just north of Cambridge.

Jon “Swanny” Swanson was the Purple Hawk’s first-ever golf pro. But for those who knew him, he was more than just someone who taught people how to golf better and who helped run the pro shop. He was a friend, mentor, golf partner, and just, as his obituary read, “one of the good guys.” He unexpectedly died on April 3, 2021, while playing golf at the Chaska Town Course.

The story of how Swanny became Purple Hawk’s first golf pro is filled with lucky breaks, or perhaps twists of fate. Dr. Donald Grossbach, who was the President of the Board of Directors at that time, told the story of how Swanny originally wasn’t on the hiring committee’s final five applicants to be interviewed for the position. As the four-person committee was deadlocked between two of the candidates, the committee adjourned and went home. That night, Grossbach received a phone call from a golf sales rep who had heard they were looking at hiring a golf pro. He asked if Grossbach would give him the names of the finalists, and after hearing the names, asked Grossbach “have you looked at Jon Swanson?”

“I said, ‘no, he didn’t make the cut.’ And he said, ‘I strongly advise that you look at Jon Swanson before you make a decision,’” Grossbach recalled. “So we brought Jon Swanson in for an interview. And he comes in all nicely dressed in his golf attire, carrying his briefcase. He comes in and does his interview, with his coy little Arnold Palmer smile, and so we’re asking him questions. He pulls out of his briefcase his budget, what he thought it would cost in materials to fix up the pro shop... and after the interview we sat down and looked at each other and said ‘that’s the guy.’”

Later on, while talking with another member of the PGA, Grossbach mentioned the hiring of Swanson. “Oh, Mr. Briefcase! You hired a good one there,” was the response.

“I just feel like we have had the opportunity to move forward into a much higher status of golf course than we had before Jon Swanson came here,” Grossbach concluded.

“I have huge shoes to fill, probably won’t ever be able to fill them,” said current Purple Hawk golf pro Matt Grell. “Jon meant a lot to me. Many of us have interacted with him. We’ve had a lot of history with Jon. Everybody’s been impacted somehow, whether its through golf, friendship, the community, Jon was that type of guy. To me, he was my role model.

“He was always there to mentor me. I always kept in contact with him,” Grell continued. “When I came back here to Purple Hawk as a pro, if I had any questions or anything, I always brought it past Jon.

“I really wish I could have one last round of golf with him, take a couple more bucks out of his wallet, sit upstairs and have an ice-cold gin and tonic and just talk about life.”

“Our friends thought we were crazy to drive 80 miles round trip, and pass eight golf courses to get to the Hawk, but we have made so many good friends, and it started with Jon,” summarized Swanny’s former golf partner Paul Lieser. “I was overjoyed when Jon asked me to be his lead partner, and looked forward to Thursdays when I could play and learn from the best. He had such a smooth swing and drove the ball a mile. He was also an awesome iron player and chipper. (But) I really can’t say much about his putting.”

Perhaps even more memorable with Lieser, though was off the course. “Most of our conversations centered around family. He was so proud when Kathy (his wife) got her position with the PGA. Matt and Lauryn (his children) were his pride and joy. He never wanted to miss any activities they participated in, so we would arrange our tee times around them when possible. He was a very proud dad.”

Swanson’s daughter Lauryn told about his final days before his death. “Friday, April 2 was a nice day out, and so he told me the night before ‘I think I’m going to be sick at about 11 o’clock tomorrow.’ And I said ‘what do you mean, be sick?’ and he was like ‘I gotta go out to the Hawk and play.’ Lo and behold, at 11 o’clock he tells Doug (Hallstrom, President of MinnCo Credit Union, which Swanson now worked at), and Doug knows of course he’s coming out to the Hawk. So dad comes out, plays a full round here, gets some drinks in the bar.

“He came home, we watched the UConn (women’s basketball) game together. As I’m sure most of you know, my dad coached both Matt and I in basketball, so that was just a huge deal, a good last night to watch the game together. And then the next morning he gets up at the crack of dawn to play at the Chaska Town Course.

“It’s really special for Matt and I and our mom that his last full round of golf was at the Hawk and his last few holes were at the Chaska Town Course, where he played growing up.

“It’s really special that we now have this leader board to memorialize my dad.”

“Our family is just completely blown away by this scoreboard,” added Kathy. “We can’t thank you enough for doing this in his honor. This is just beautiful, absolutely beautiful.”