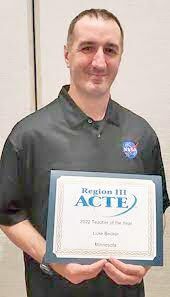 Luke Becker poses with the certificate he won for being the regional ACTE Teacher of the Year, the contest held prior to the national competition.

Luke Becker met with Sen. Amy Klobuchar over Zoom, during which they discussed the upcoming Eco-marathon in Indianapolis.

Luke Becker poses with the certificate he won for being the regional ACTE Teacher of the Year, the contest held prior to the national competition.

Luke Becker met with Sen. Amy Klobuchar over Zoom, during which they discussed the upcoming Eco-marathon in Indianapolis.

When Luke Becker got hired at Braham High School close to nine years ago, he gave then-Superintendent Greg Winter a list of 10 items that he would accomplish. Winter told him that the list looked like a wonderful 10-year plan.

But Becker, industrious industrial technology instructor, accomplished nine of those 10 items within two and a half years. “The 10th one got bypassed a couple times, but got finished last year,” Becker said.

It’s this attitude of accomplishment that has parlayed Becker into the national spotlight, winning teacher of the year from the Association for Career and Technical Education at a ceremony in early December. But it isn’t his accomplishment alone, he is quick to point out, giving credit to his students who inspire the projects his classes tackle.

“I didn’t do anything. The kids did,” Becker said. “I just opened the door and provided an opportunity. And if the kids would’ve said, ‘This is stupid; I’m not doing it,’ I would have been, ‘All right, cool. Let’s move on to the next thing and find something that’s not stupid, that you want to do.’”

Becoming an award-winning teacher wasn’t always in the plans for Becker, who is originally from Kimball. As a ninth grader, Becker lost his father to cancer. His father made him promise that he wouldn’t work construction when he graduated from high school.

He did have a couple of construction jobs, but he claims he wasn’t particularly good at it. As a senior in high school, his lack of prowess in construction reminded him of his promise to his father.

“There were two teachers that, after my dad died, were super-influential in keeping me out of trouble.” Becker said. “One was my agriculture teacher and the other was a guidance counselor.”

He decided to become an agriculture teacher because he would spend less time in college, but more importantly, he thought, “I might get to the kids before they’re forced to be in (the guidance counselor’s) office.”

He attended the University of Minnesota and after graduation, got his start teaching in northern Minnesota in a position that wasn’t a good fit.

“I have a family member who’s a Paralympic gold medalist, and I was working for him on the side,” Becker said. “I had the opportunity to do something for him and the school said, ‘No you can’t go,’ and I said all right, then I’m done.”

After he resigned from that job, he wasn’t sure if he wanted to teach again. Then, while attending the X-Games in Los Angeles, and working on prosthetic legs for his brother-in-law, he received a call from the Braham district. He told the interviewees that it was imperative that FFA was an option at Braham Area High School. The Eco-marathon Super-mileage competition, a global competition for high school and university students working toward building ultra-energy-efficient cars, was also a necessity.

“These are who I am and what I teach,” he said at the interview. “If you don’t want that, then we can each find somebody else.

“I didn’t come in with this big list of projects and these grandiose things that we’re doing — that wasn’t my intention,” Becker said. “I was trying to come up with things that would be interesting to our students and help move them forward in the aspect of what they wanted to do. Every time we picked up one of these things it was always kind of a happy accident.”

One of his first happy accidents occurred when he was still teaching up north. A student, later killed by a drunk driver, inspired Becker’s interest in competing on the international level.

“At some point during the year prior to his death, we were talking about where I was hoping the super-mileage program would go some day. We talked about how some day it would be really cool to go do the international event in California.”

In 2019, the Braham team competed in Sonoma, California, realizing that late student’s dream. “When I got off the plane (in Sonoma) with that super-mileage team, I might have cried a little bit,” Becker said. “It was fulfilling that promise to that student.”

“Happy accidents” occur frequently in Becker’s classes. For instance, having students compete in the World Food Prize has been a happy accident.

“We’ve had two global finalists in the World Food Prize in the last 3 years. We’re talking 20 different countries — China, Russia, Sweden, United States,” Becker said. “Only 600 students have been chosen in the last three years, and Braham has had two of them.”

Another happy accident was when one of the projects his students worked on — creating a prosthetic ski foot — caught the ear of NASA.

“NASA heard about it, and they came to us and said ‘Hey, can you build some stuff for us?’” Becker said. Some of the “stuff” the students have been working on with NASA include a washing machine that can be used in space and a methodology using magnets enabling astronauts to stay attached to a spaceship when they are outside the vehicle.

“None of these things we’ve been doing and we’ve been attempting to do were things that we were trying to find,” Becker said. “Like I said, it’s been a lot of happy accidents.”

When Becker received his teacher of the year award from ACTE, another of those fortuitous coincidences took place. Receiving the national award for Teacher of Teachers was Brad Greiman, a professor emeritus at the University of Minnesota, who happened to be Becker’s advisor and instructor at the U.

In a recent Zoom meeting with Sen. Amy Klobuchar, the senator praised Becker for his innovative and captivating work at Braham.

“Every day Luke engages and inspires so many students in his agricultural technology and physics class,” Klobuchar said. “In other words, he makes science cool. And as the career and technical education coordinator, he’s helping students to get ready for the jobs of the future.”

Part of readying his students involves knowing his students and being able to adapt. He frequently looks at his current classes to determine the most advantageous situation for that particular group of students.

“But if it’s something that could change their lives or make them more employable or get them into the college that they want to get into, when you have opportunities like that, it’s really hard to look a kid in the eye and say, ‘no I’m not doing that.’

“Most of the time it’s like, what else can we do and how can we get better? Then I’ve got to learn how I can help them get better,” Becker said. He and his students are now gearing up for a trip to Indianapolis Motor Speedway, where Eco-marathon will be held this year.

With so many successes on his resume and trophies in the schools case, Becker could work just about anywhere, and he admits he has turned down job offers that would pay him considerably more than a teacher’s salary. He added that he could walk away from teaching and continue working with the super-mileage contests.

“But I know that I’m pretty much a life-long teacher,” he said. “My heart is in the classroom. It’s where I want to be.”