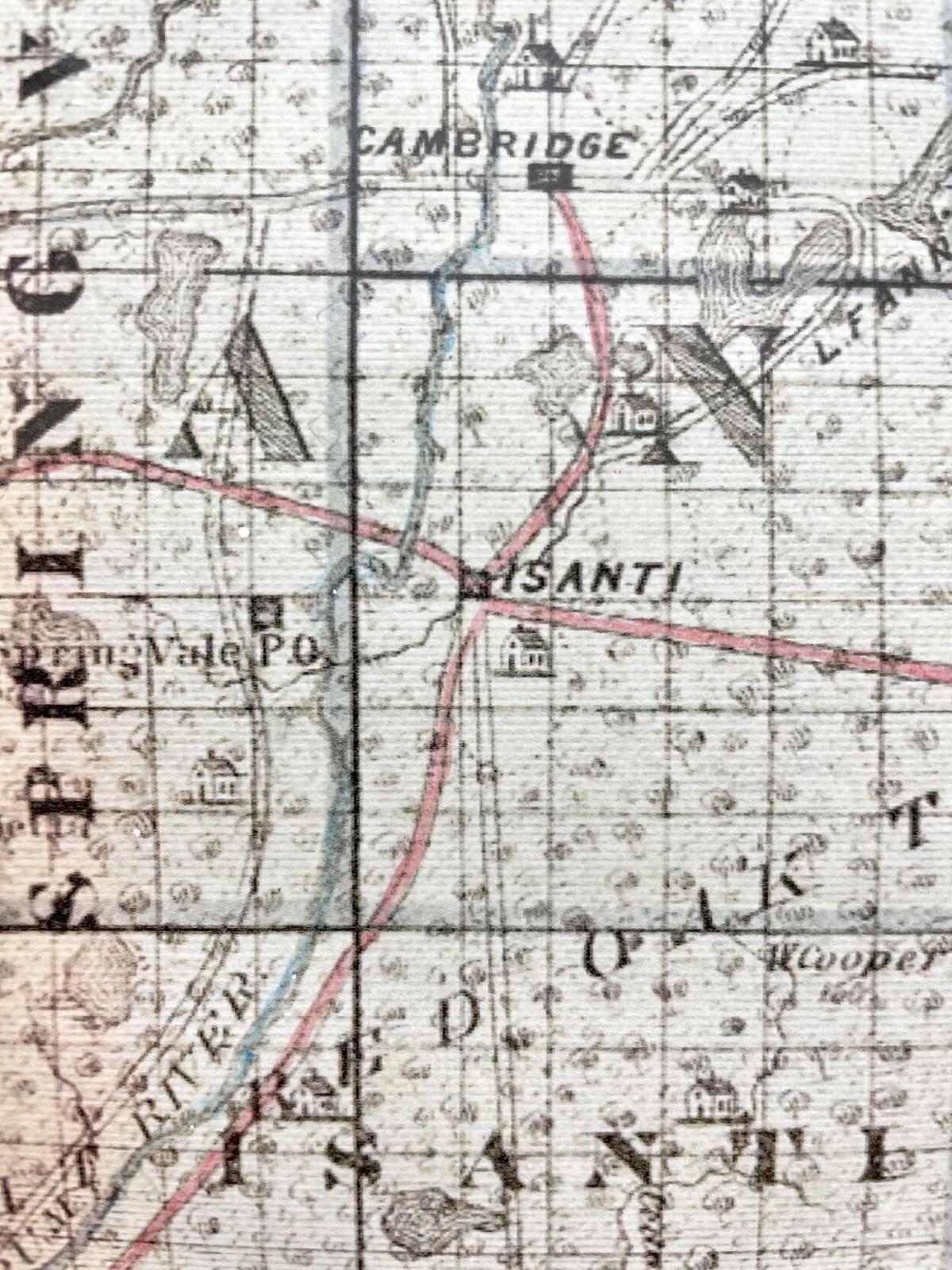 Portions of the Manomin Trail on this 1874 map are outlined in red. Note the crossroad at Old Isanti. 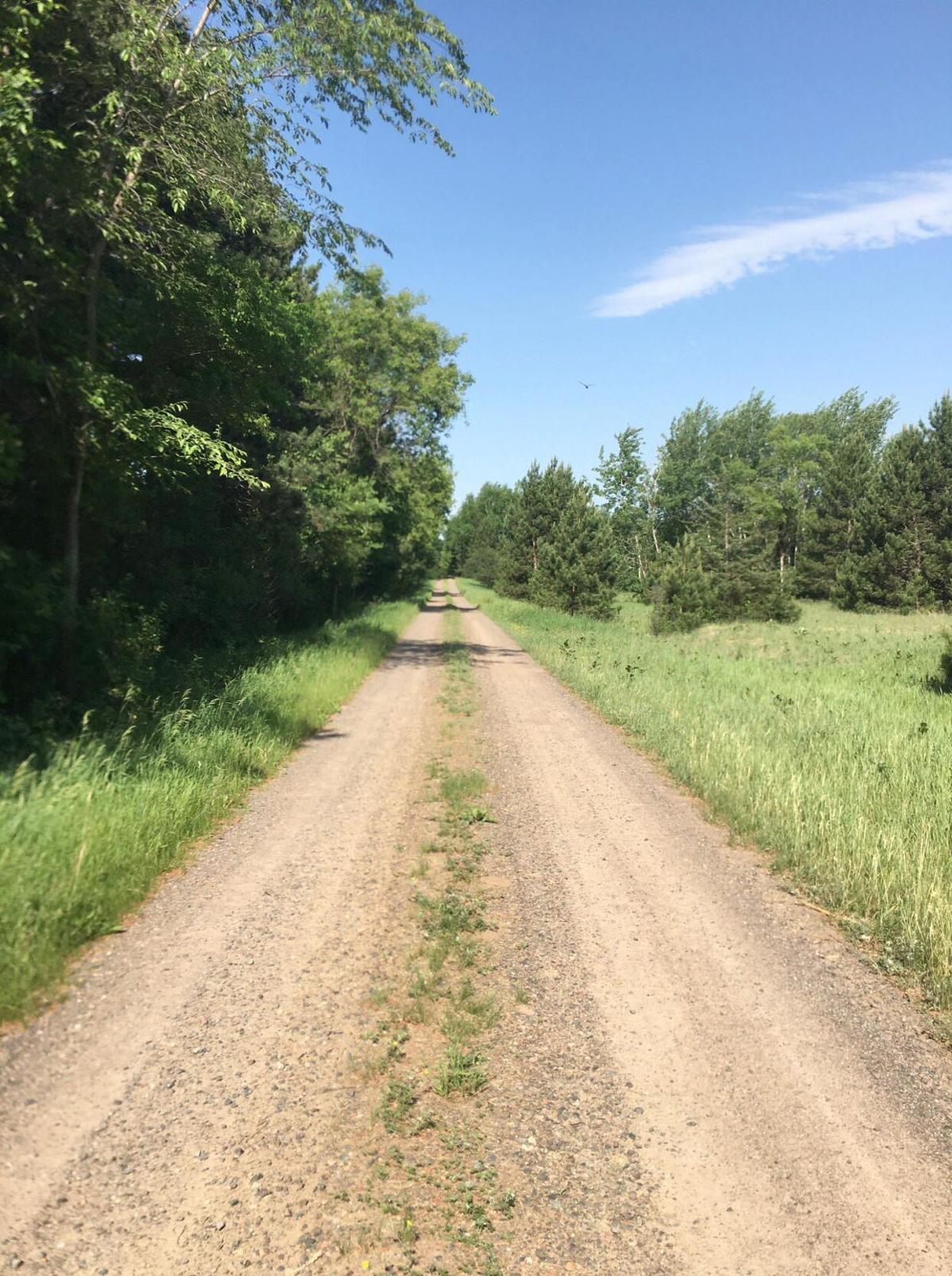 This now private drive on the Manomin Trail northwest of Old Isanti once lead to a ferry crossing and later, a bridge over the Rum River.

Portions of the Manomin Trail on this 1874 map are outlined in red. Note the crossroad at Old Isanti.

This now private drive on the Manomin Trail northwest of Old Isanti once lead to a ferry crossing and later, a bridge over the Rum River.

To the everyday motorist, traveling on Highway 65 between Cambridge and Isanti is often perceived as “just another drive.” However, many people may not realize they are traveling a portion of a historic trail that had a significant role in shaping Isanti County and neighboring communities.

What started as a trade and travel route for Native Americans, the Manomin Trail eventually became a well-known transportation and stagecoach route for area newcomers. Running east to west from Sunrise/North Branch to Princeton and north to south from Brunswick (Mora) to Anoka, the Manomin Trail provided relatively uneventful passage across several counties. The word manomin (manoomin) means “good berry” or more commonly, wild rice in Ojibwe. Portions of the trail were carved out of the landscape by early Native Americans and further developed by explorers, fur traders, lumberjacks, land speculators, and early settlers as they traveled from Isanti, Cambridge, North Branch, Anoka, Princeton, and Mora. As the trail meandered through the wilderness, it intersected a very important yet often unknown crossroads community.

Strategically situated at the four-way crossroad, “Old” Isanti was one of the more notable communities along the trail from about 1859-1899. Area lumberjacks heading north to the winter logging camps in Kanabec County did so by way of the Isanti crossroad. Many newly arriving immigrants from the rail depots at Princeton, North Branch, Harris, and Anoka looking to homestead in Isanti County and beyond would’ve utilized the Manomin Trail and crossed at Old Isanti. For those unfamiliar with the location, the crossroad was situated on Highway 65 near present-day Hayford Ford and 301st Ave NE. If you’re heading north on Highway 65, keep an eye peeled for the City of Cambridge monument on the east side. That was the approximate location of the Manomin Trail crossing and Old Isanti. Over time, the Manomin Trail at Old Isanti evolved with several conveniences. Structures on the northwest and northeast parts of that intersection would’ve greeted the weary traveler and area residents alike. There was a general store, hotel, livery-stable, blacksmith shop, tailor, cheese factory, post office, carpenter shop, and even a school. However, by the late 1890s, Old Isanti began to struggle as neighboring Cambrdige dominated area commerce. The final blow to the crossroads town came when the railroad was platted, as it just missed Old Isanti by a quarter of a mile. As a result, many businesses and landowners pulled up stakes, and in 1899, Old Isanti moved to its current location to take advantage of the newly formed railroad.

As the population grew and land ownership changed within Isanti County and beyond, the Manomin Trail was used less and less as a primary route as other roads became established and improved. As noted on the 1874 map, several “spur” trails and ancillary roads were also used, along with the Manomin Trail. Though much of the original trail has disappeared back into the landscape, many of today’s travelers through Chisago, Isanti, Kanabec, Anoka, and Mille Lacs Counties still use parts of the trail whether they realize it or not.

The next time you are traveling Highway 65 near Hayford Ford, take a brief moment to acknowledge a centuries-old trail and crossroad that helped shape Isanti County and communities beyond. History is all around us, you just have to know where to look.