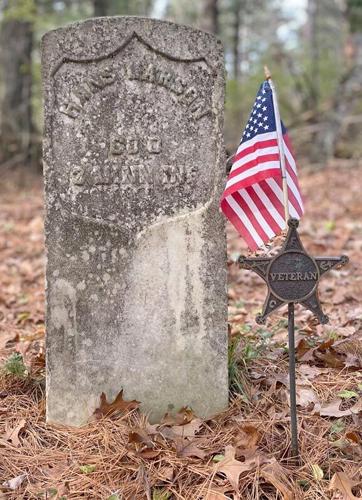 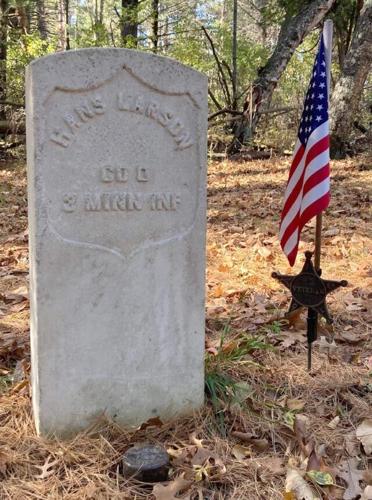 Recently, the gravestone was cleaned up.

Recently, the gravestone was cleaned up.

Tros Hans Larsson (later going by Hans Larson) immigrated to the Stanchfield area in 1863 at age 37 from the small Orsa Parish village of Hansjo in the province of Dalarna, Sweden with his wife Brita and their five children. The youngest child, Peter having been born on the passenger ship just weeks before their arrival in America. Once they entered Isanti County, the Larson’s plotted out a rough parcel of land in the area presently known as the Grandy pines.* The dense cover of the white pines offered some form of shelter for the newly arriving family; it was there that a temporary home was hollowed out of a hillside to further shield from the elements.

Like many immigrants of the time, the Larson’s existence was full of hardship and uncertainties; they didn’t have much more than the clothes they wore when arriving in Isanti County. What few possessions they did have, would’ve been stowed away in a trunk or strapped to the backs of family members as they traversed the countryside on foot. Traveling with a newborn and four other children into a new land certainly would’ve been a daunting experience, even by today’s standards. Like many pioneers, the goal was to lay claim to a piece of property by way of the Homestead Act of 1862 and have the freedom to own, farm, and raise a family on the land of one’s choosing. But carving out an existence in the densely wooded forests of central Isanti County was no easy task. To obtain the basic necessities, a source of income was desperately needed, especially for a growing family. Like many early pioneers of the area during the 1860s, the lure of payment by way of enlistment for service in the Civil War was all-to-tempting for many, including Hans. Some sources indicate that Hans took the place of a local draftee, which was a perfectly legal option at that time. So on December 6, 1864, Hans volunteered for service in the Union Army. Although his service with the predominately Scandinavian - Company D of the 3rd Minnesota Infantry was somewhat brief at just over 8 months, it must’ve felt like an eternity being hundreds of miles away from his family.

Upon his return from service in the late summer of 1865 Hans and Brita continued to carve out their existence in the Grandy pines and utilize the few resources they had. A small cabin was erected deep in the white pine forest and the family had some crops in the ground. One of the most important resources came in the form of other families in the area. Comfort in the sense of cultural familiarity of those who arrived before families like the Larsons made the transition bearable. Part of the comfort and familiarity came by way of spirituality and faith. Shortly after Hans returned from military service, he helped form the Stanchfield Baptist Church in 1866, which is still active to this day. As frontier life in the Grandy / Stanchfield pines evolved for the Larsons, difficulties and setbacks continued. Although never wounded in battle during the Civil War, Hans became stricken with a respiratory ailment while in service. As he tried to persevere through his condition and continue to clear land for farming, Hans eventually succumbed to respiratory distress and passed away, leaving behind his wife and five children. It was decided by the family that Hans was to be buried beneath the white pines overlooking a small stream that ran through the property.

His wife Brita (who later Americanized her name to Betsey) eventually achieved the family’s dream of securing the homestead rights to the land that she and Hans fought so hard to obtain, and in 1870 walked to the nearest land office in Taylors Falls where she was given full title to 160 acres in the Grandy pines. Hans and his family’s story are not unlike many others of Isanti County during the initial settlement period in the 1860s in the sense that life was incredibly difficult and wrought with hardships and tragedy. Hans came to the United States hoping to make a better life for himself and his family, and in doing so, ultimately gave up his own.

Hans’ marker is lovingly cared for by a landowner within the Grandy pines. The manicured knoll deep in the towering white pines overlooking the gently flowing creek has been the quiet resting place for area pioneer and Civil War Veteran Hans Larson for 156 years. Historical records indicate that Hans is not the only person interred on the knoll. Some early pioneers, as well as Native Americans, lie in eternal rest near the prominent headstone of Hans Larson. The Isanti County Historical Society was fortunate enough to acquire permission to visit the site on private land and capture some contemporary images for our records; it was a moving experience.

*Note that “Grandy” is used for modern geographical reference as it wasn’t recognized as a town until the late summer of 1899. Also, several of Hans and Brita’s descendants live in Isanti County; currently, one of their great, great, granddaughters has called the Grandy pines home her entire life.

If you’d like to learn more about Hans or other Veterans of Isanti County, stop by the Isanti County Historical Society on Friday, November 11 for the Veterans Day Open House from 10 a.m. until 12 p.m. There will be free refreshments and new military-themed displays dedicated to Isanti County Veterans. Visit www.isanticountyhistory.org/events for details and location.