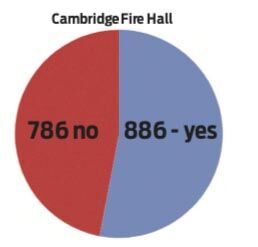 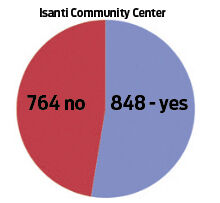 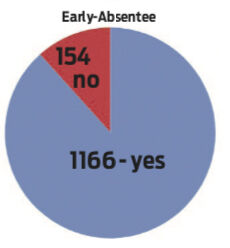 As reports came in alerting of long lines and larger-than-expected voter turnout for the Cambridge-Isanti School District’s two-question operating referendum vote, proponents of the referendum were admittedly a little nervous. After all, analytics state the larger the turnout for special elections, the less likely such ballot questions have in passing.

As it turned out, however, those fears were unrealized as both ballot questions not only passed, but passed by a significant margin.

The final tally for question one, which was labeled “Authorization to Hire/Retain High-Quality Teachers and Support Students,” was 2,900 (63%) yes votes and 1,704 (37%) no votes. For the second question, whose passage was also contingent on question one being approved, and was labeled “Additional Authorization to Support Vocational Technology and College Readiness,” the tally was 2,850 (62.1%) yes votes and 1,742 (37.9%) no votes.

“It’s a great day to be a Bluejacket. We look forward to smaller class sizes, more personalized learning and strong future leaders in our community,” said Superintendent Dr. Nate Rudolph. “We are humbled by the outpouring of support from our community, and we are committed to using these funds responsibly to support student learning. Our Citizen’s Finance Advisory Council will continue its oversight, and we will act with transparency and accountability the voters expect.”

What slid the election results from a narrow margin of victory to an overwhelming one, however, was the early voting results. Early voting was available from Sept. 17 through Nov. 1, either through the mail or in-person at the Education Building or the high school. The results of the early voting were 1,166 (88.3%) yes votes for question one, compared to only 154 (11.7%) no votes on question one. Question two had an equally large margin, with 1,155 (88.1%) yes votes compared to 156 (11.9%) no votes.

Interestingly, the voting percentages were almost a complete opposite of 2020’s one-question operating referendum. For that vote, which was held simultaneously with the presidential election, the question failed by a margin of 62.2% no votes to 37.8% yes.

As expected, it was a very light turnout for the North Branch Area School Board election, as Jesse LaValla, who was previously appointed to the vacated seat of Kirby Ekstrom, was running unopposed to finish out Ekstrom’s term.

Only 148 votes were cast, with LaValla receiving 131 of those votes. There were 17 write-in votes.