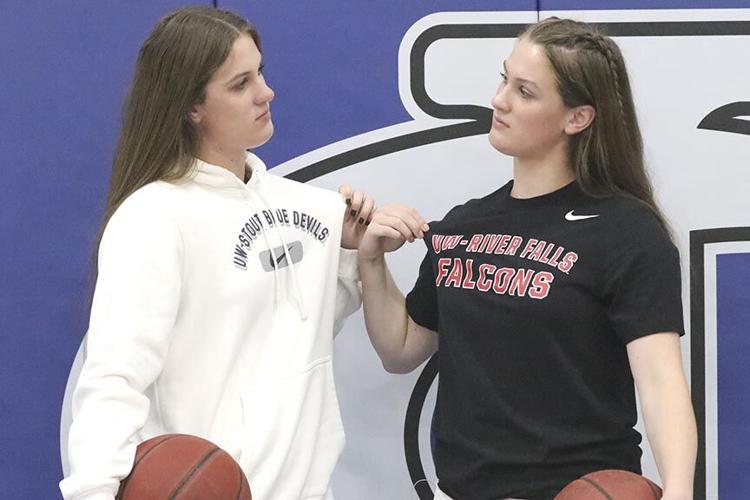 After 17 years of being on the same team, twin sisters Maraya (left) and Evelyn will be facing off against each other once they attend rival colleges a year from now. 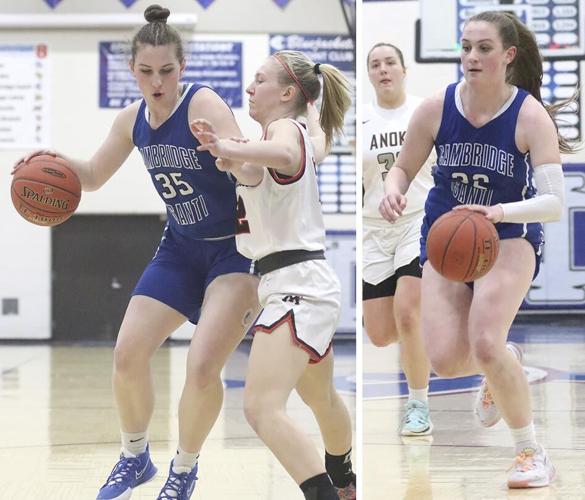 Maraya (left photo) and Evelyn have had differing roles on the Bluejacket girls basketball team, meaning the sisters have never felt they had to internally compete against each other.

After 17 years of being on the same team, twin sisters Maraya (left) and Evelyn will be facing off against each other once they attend rival colleges a year from now.

Maraya (left photo) and Evelyn have had differing roles on the Bluejacket girls basketball team, meaning the sisters have never felt they had to internally compete against each other.

Ever since they were born a mere one minute apart, Maraya and Evelyn Wiltrout have been virtually inseparable.

“For 17 years, we haven’t gone longer than a couple days without seeing the other,” admitted Evelyn — the “younger” of the two.

As they begin their senior years at Cambridge-Isanti High School, however, they do so knowing that all of that will change after graduation as the two have verbally committed to play basketball at different colleges, and rival schools to boot. Beginning in the fall of 2023, Maraya will be attending the University of Wisconsin-Stout, while Evelyn will be about 40 miles away at the University of Wisconsin-River Falls.

It could be said that Maraya and Evelyn are typical — if not stereotypical — identical twins. As toddlers, they would wear very similar clothing, just perhaps in different colors. They also were mostly interested in the same activities, whether that was sports or other activities. And as they grew older, they did start to form their own identities.

“I did gymnastics for a year when I was about five,” Maraya noted, “and Evelyn did swimming. While short-lived, it did pay off because I can do a cartwheel, and she cannot.”

Their teenage years revealed other differences between the two. Physically, Maraya is about two inches taller. As for personalities, both agree that Maraya is more outspoken. Besides that, “I love to drive and Maraya would much rather control the music,” Evelyn said. “So that works out really good for us.” Evelyn also mentioned another interesting difference “Maraya also likes to buy shoes and I love to wear them.”

Academically, they are similar but have polar opposite preferences, which some would argue is a common characteristic of twins. Both agree that Evelyn is stronger in and enjoys English and writing, and they agree (although Evelyn begrudgingly does) that Maraya is stronger in science and math. Those differences are reflected in their preliminary choices for college majors as Maraya is looking at Biology and Evelyn is looking at Political Science.

What could have been a drastic difference between the two of them eventually turned out to be a similarity as well. About seven years ago, Maraya was diagnosed as a Type One Diabetic. Three years later, Evelyn received the same diagnosis. As a result, both wear blood sugar monitors even while participating in sports to make managing their blood sugars easier.

DOUBLE TEAMING ON THE COURT

The one area the two are most closely connected is on the basketball court. The two started playing around kindergarten age “and haven’t stopped since.” During that time, the two can only think of one time when they weren’t on the same team.

“We guarded each other and had some playful smack talk,” added Maraya, “but we would also whisper to each other what the other should do better. There was certainly no ill will during the game.”

Probably because they were always on the same team, the sisters proclaim to never experience any sort of sibling rivalry.

“We sometimes engage in playful smack talk but there has never been a legitimate rivalry,” said Maraya. “We have always wanted the best for each other and are always thrilled for the other’s success.”

“As players, a lot of people assume we are similar, interchangeable even,” Evelyn said. “But, we’ve always had different roles so we’ve never competed for the same spot.”

That lack of rivalry and their differences made the process of choosing colleges go much smoother. The sisters — and their parents — went into the process with open minds as far as the possibility of not going to the same school was concerned.

“We decided that we would make our decisions individually, and if they happened to be the same place, great. If not, great too,” said Evelyn.

“We were definitely leaning towards going separately,” said Maraya. “We think that it is super important for us to grow as individuals. We have always had the other as a sort of ‘safety blanket,’ and we — our parents included, decided it would be best for us to create some distance and force ourselves out of our comfort zones.”

“We came to that decision after a lot of talks with our family and figuring out what worked best for us,” added Evelyn. “We thought it would be important to ‘spread our wings and figure out who we are individually.”

While this decision could have made the whole process more awkward for recruiting coaches, the two said everyone they spoke with was supportive.

“Whenever we talked to colleges we said that there was always a possibility for either option,” Maraya said. “Everyone was always super supportive of that, and no one ever made us feel like it was both of us or neither of us. More often than not the first question coaches asked was if we wanted to be recruited separately or as twins. We always said that we wanted to be recruited separately since we valued individual relationships with coaches.”

Ironically, the twins gave nearly identical reasons for why they chose the schools they did to continue playing basketball.

“One of the main reasons I chose the University of Wisconsin-River Falls was for the coaching staff,” Evelyn said. “I feel very supported as not just an athlete, but as an overall person. Coach Lyman was, and is, very encouraging of my aspirations outside of basketball, and I thought that was extremely important, because basketball is not my whole life. On the basketball side of things, I feel that the team is a family and works extremely well together. That is 100% something I want to be a part of.”

“I chose the University of Wisconsin-Stout for many reasons,” said Maraya. “First, I absolutely loved the program and coaches. I gelled with the coaches from our first interactions. The way they run their program on and off the court is something I loved and totally see myself fitting in to. Second is their culture. They are all so supportive of each other, while always pushing each other to be the best versions of themselves. They have the perfect mix of fun and competitiveness that I can’t wait to be a part of.”

The result of their decisions is the two will now be facing each other at least twice a season as part of Wisconsin Intercollegiate Athletic Conference rivals, a fact that both are approaching with, naturally, the exact same mindset.

“I am really looking forward to playing each other, Evelyn said. “I don’t think it will be awkward, but rather enjoyable. We know each other’s strengths and weaknesses pretty well, so it’ll be neat to see how we will adjust our game when playing against each other. We will be enemies on the court but we will be best friends as soon as the buzzer sounds.”

“I am extremely excited to play against her and River Falls,” Maraya echoed. “There will most certainly be a little more drive to our competitive spirit, but no awkwardness. We will do whatever it takes on the court to help our respective team win, but off the court, we will go right back to being each other’s best friend.”