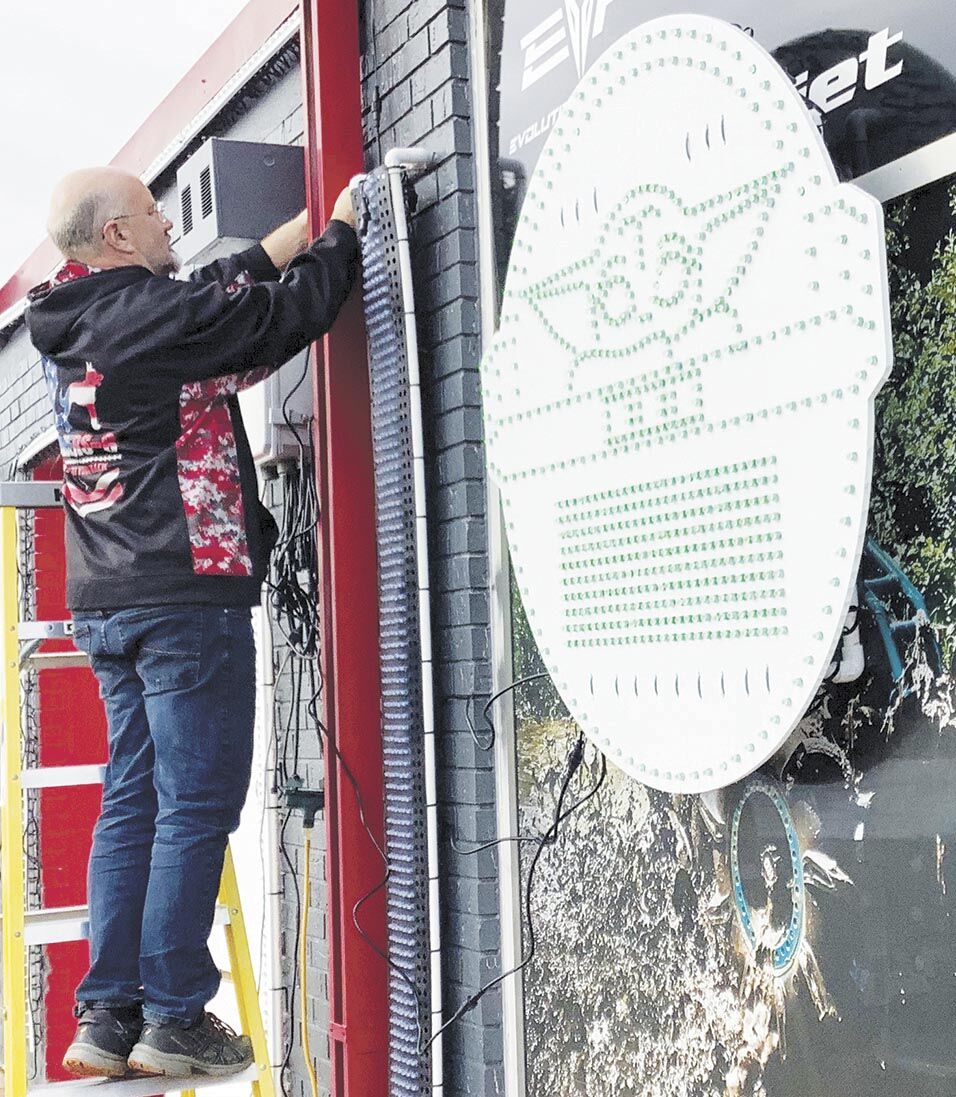 While Grogru — a.k.a. Baby Yoda — looks on, Ryan Scheler makes cable adjustments to his displays. 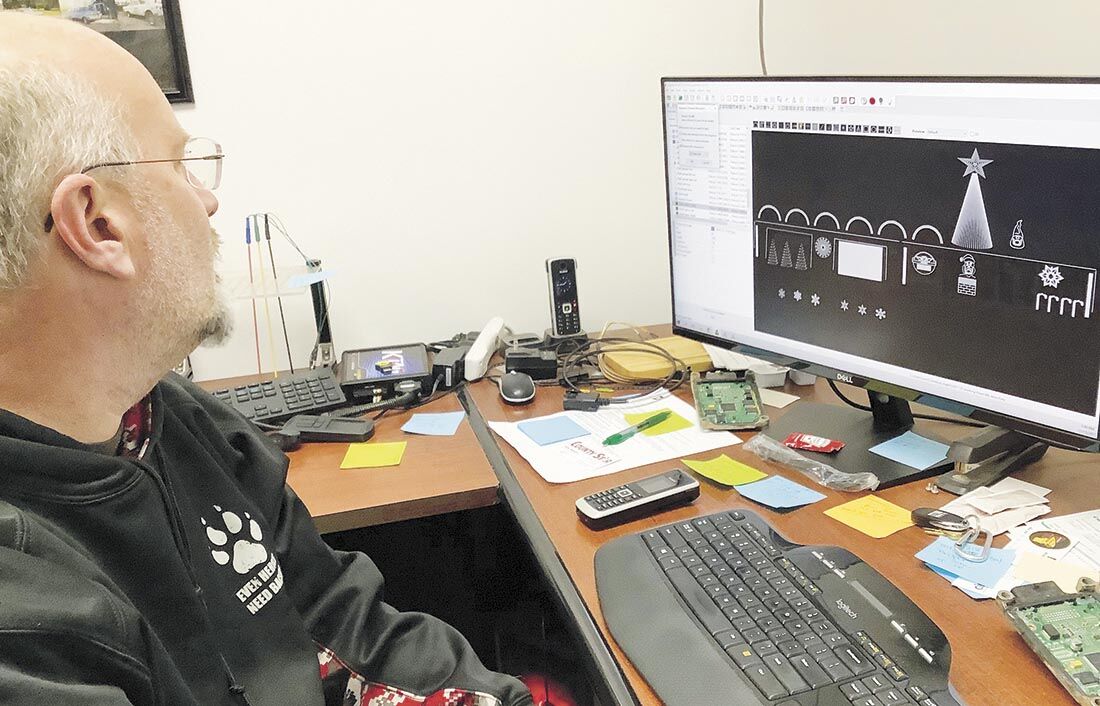 Building a show requires ensuring the light display is synchronized with the music, which Ryan Scheler manages here.

While Grogru — a.k.a. Baby Yoda — looks on, Ryan Scheler makes cable adjustments to his displays.

Building a show requires ensuring the light display is synchronized with the music, which Ryan Scheler manages here.

A little more than a year ago, Ryan Scheler found himself growing weary. The pandemic had been impinging on his life — well, everyone’s life — for nine months, and he needed a change.

For close to a decade, he had been helping friends with holiday displays at their homes, the kind that synchronized a light show with music. A lightbulb went off in Scheler’s head — or rather, more than 10,000 light bulbs. In the first week of November 2020, he ordered a 13,000-pixel Christmas display to decorate his business, RVS Performance on Cambridge’s 1st Avenue East.

Those same friends he had been helping over the years told Scheler that not only would the display not arrive in time, he would never get it built by his self-imposed Thanksgiving deadline.

“They said, ‘You’re crazy. There’s no way you’ll get this done. We take all year to get this done.’” With the help of relatives, friends, employees and his motorcycle-rider group, he made his deadline with time to spare. “There was one day we had 30 people here, all at one time. We built 80% of it in three hours.”

This year, instead of resting on his colorful, well-lighted laurels, he’s gone bigger. First, instead of cutting it close with his deadline, he started early. “We’ve been working on it all year, little by little,” he said, referring to himself, friends, family, coworkers and volunteer community members who have been working on the project. “I’d say we’re about 400-manhours into it for this year.”

Additionally, this year’s display is more than twice the size of last year’s — just short of 30,000 pixels, or individual lights. The pixels, about the size of a pencil eraser, are inserted one-by-one into tiny holes on hard, corrugated-plastic models known as props. Each pixel can light up in three colors — red, blue or green — and each comes with its own microchip and the ability to be individually programmed to follow a sequence. The RGB pixels are controlled through a computer program allowing the sequence to be synchronized with music — all to create a “show.”

“Technically, you could call it 90,000 pixels, since each one has three LEDs in each one,” he said.

“A bunch of different companies sell the corrugated-plastic designs, and then they upload the wiring schematics into the software for you, so you can open it up and know how to wire everything,” said Scheler, who had no experience with creating light shows until last year. Like minded — or light-minded — decorators in the area share their props and shows with one another, and they are extremely active on social media, offering tips and assistance to one another.

The largest prop in Scheler’s display this year holds 9,000 pixels and will use a dedicated power source and separate data line. Putting the pixels in the holes was a time-consuming process, which took all summer to complete. “My fingers still hurt,” he said.

Some of his displays stayed in place mounted to the business since last year. A large tree that was attached to the roof of the building is in perfect working order with no “bad pixels.” Most people ask about the amount of electricity that is used to light the display, but Scheler said that cost is negligible compared to the price of the pixels themselves.

“It costs about a dollar a pixel, so, you know, do the math,” he said.

Once a show is completed, the program can be adjusted so different music and different displays are shown, and viewers can listen to the music for the show via car radio. The frequency will be posted at RVS and on the business’s Facebook page so drivers can tune in.

Last year, we had a 20- to 30-minute show, but then I would change them out every week so people could drive by and see a different show,” he said. He intends to do the same this year, but he is reserving the week of Christmas for traditional carols — no Rudolph, Santa or kids looking for their two front teeth.

Scheler intends to share on social media the home and business addresses of other display-niacs in the area for people to check out. Scheler’s Griswaldian display — “That’s my inspiration! Clark is my hero,” he exclaimed with a laugh — will stay up until after the New Year. If all goes according to plan, the aches, pains, expenses and time will have been worth it.

“I’m having a blast. I absolutely love doing this,” he said. “At the core of it, I did this for me. I wanted cool Christmas lights for 10 years, and I finally did it. The side effect is the community gets to benefit from it. I want to do this for me, but at the same time, I want to share that with the community and give people some happiness for the holidays.”

Scheler added that many people last year thanked him for making their season bright and, in some instances, “kept them going another day.”

“That’s what makes it worth any expense to do this, and that’s why we improved it this year, and stepped it up and made it better,” he said. “I love it, and I’m looking forward to it.”