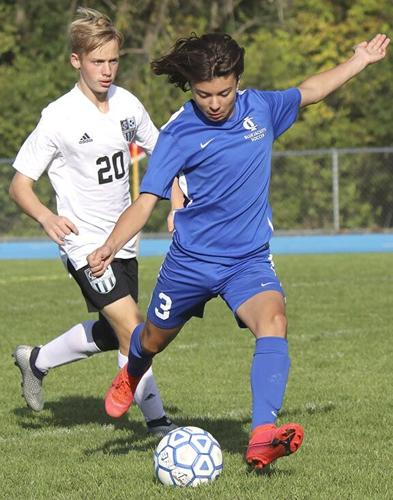 C-I’s Cash Vangelof lines up to send the ball upfield during the Jackets’ game against Becker. 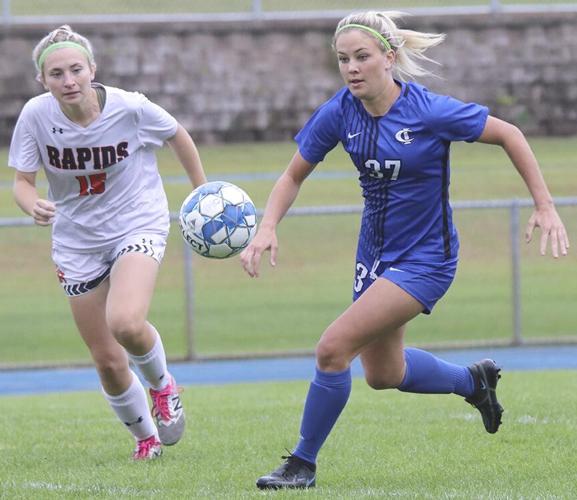 C-I’s Makayla Wilkinson races after a bouncing ball during the Jackets’ game against Grand Rapids. 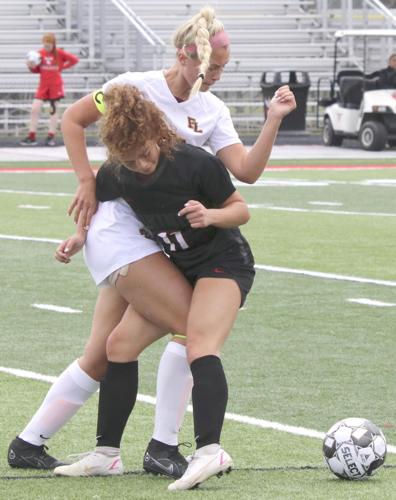 North Branch’s Summer Fruth gets all tangled up with a Forest Lake player during the Vikings’ game against the Rangers. 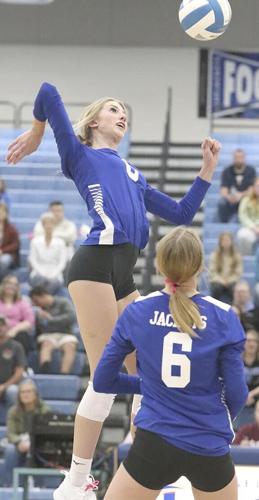 C-I's Brooke Johnson goes up for a middle attack off a pass from setter Brooklyn Dickey.

C-I’s Cash Vangelof lines up to send the ball upfield during the Jackets’ game against Becker.

C-I’s Makayla Wilkinson races after a bouncing ball during the Jackets’ game against Grand Rapids.

North Branch’s Summer Fruth gets all tangled up with a Forest Lake player during the Vikings’ game against the Rangers.

C-I's Brooke Johnson goes up for a middle attack off a pass from setter Brooklyn Dickey.

Winning is contagious. As proof, I give you the C-I boys soccer team. After breaking a two-year drought a week ago, the Jackets finished off their regular season on a six-game high, bringing their season record close to the .500 mark at 6-7.

Last week, the team capped off their season with a 2-1 win over Becker, a 3-0 victory over Proctor, and a 4-2 win over Mesabi East. In the game against the Bulldogs, it looked like the streak would end at three, but two goals in the second half — one by Josh Foley and one by Trevor Rettmann, gave the home team the win.

The team is facing an uphill battle to extend their winning streak into the playoffs. They will likely receive no better than the #6 seed in Section 7AAA, meaning they will have to travel to a higher ranked opponent in the quarterfinals, on Oct. 11.

North Branch finished their regular season with a pair of lopsided losses, falling to St. Francis 5-1 and Cloquet 6-1. Eric Flor got the only goal against the Saints and Drew Detzler scored the lone goal against the Lumberjacks. Like the Jackets, the Vikings will be seeded no better than #6 in Section 7AA, which also starts tournament play on Oct. 11.

The Jacket and Viking girls futbollers have reached similar destinations as their boys counterparts. The Jackets finished their regular season with a 3-0 win over Becker, a 2-0 loss against Grand Rapids, and a 2-1 win versus Legacy Christian, giving them a 7-7 season record. The Jacket girls will also likely get no better than a #6 seed in the Section 7AAA tournament, on Oct. 11.

North Branch ended their regular season with a 4-10-1 record after falling to St. Francis 7-0, Duluth Marshall 2-0 and tying Forest Lake 1-1. They enter the Section 7AA tournament with a probable (stop me if you’ve heard this before) #6 seed.

The Vikings suffered a heartbreaker for their first loss of the season, falling to Grand Rapids 27-24. North Branch held a 24-20 lead in the final minute of the game, but the Thunderhawks struck on a touchdown pass with 2.4 seconds remaining to pull off the win.

The Vikings will now host Duluth Denfeld, who is at the bottom of the Section 7AAAA standings. After that, NB has two key games against Hermantown and Cloquet, which will go a long way in determining those three teams’ seeds for the section tournament.

C-I kept their game against Monticello close through halftime, but the Magic broke loose in the second half, giving the Jackets a 34-6 loss. Elias Dee scored the lone Jacket touchdown on a 20-yard pass from Braylon Davis in the second quarter.

The Jackets ran two races last week — at Foley and at Duluth. The boys team had nearly identical results in both races, with the team finishing fourth and Hunter Jacobson leading C-I with an 11th and 12th place finish, respectively.

The girls runners finished seventh at Foley and fourth at Duluth. Makenna Sjoberg came in 13th at Foley, but had a stellar run at Duluth, coming in second.

North Branch competed at Hibbing last week, with the boys finishing in 14th place and the girls finishing in 18th. Jordan Stum was the top boys runner, coming in 17th. Ava Witkowski was the first Viking girl to cross the finish line, coming in 80th.

The Jackets lost to Duluth East last week by a score of 92-81. Jovie Ebertowski was the only Jacket to claim a first place, winning the diving competition.

C-I also fell to Monticello, with that team score being 101-75. The Magic were just too strong for the Jackets, taking every first place until they swam as exhibition only starting with the 200 free relay.

The Jackets were given the #8 seed in the Section 7AA team tournament, which gave them an opening round home match against Duluth East. Unfortunately, the visiting Greyhounds ended C-I’s team season 5-2. A few Jacket players will have an opportunity to extend their season during the individual section tournament, which starts next week.

North Branch was handed the #18 seed, where they lost to Andover 5-2 in their opening round.