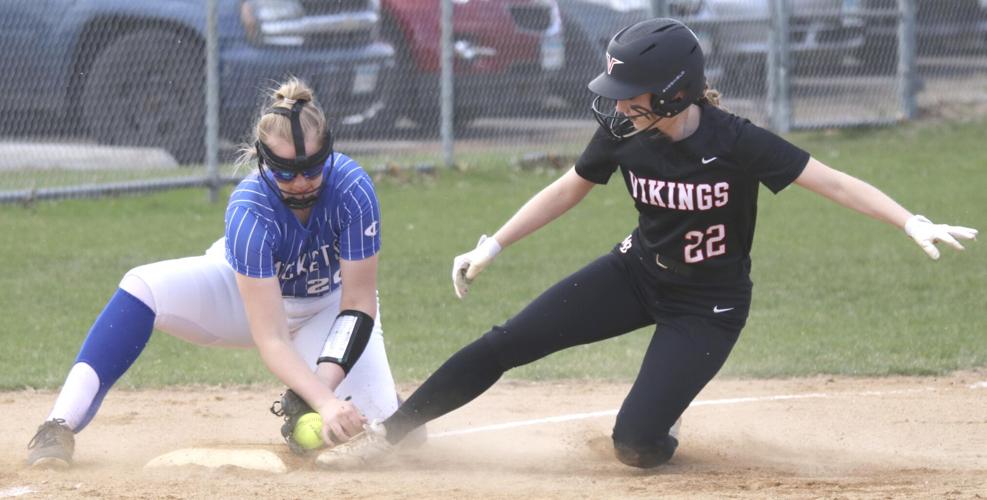 Cambridge-Isanti’s Croix Vavra puts down a tag on North Branch’s Smantha Schmitt on a close play at third base during the two teams’ game at North Branch. 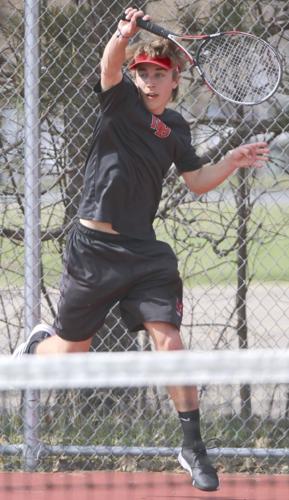 North Branch’s Gabe Wurdemann follows through on a return during his match against Becker. 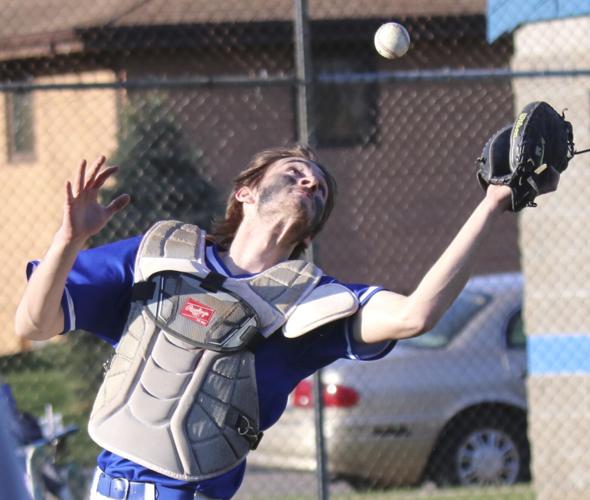 Cambridge-Isanti’s Croix Vavra puts down a tag on North Branch’s Smantha Schmitt on a close play at third base during the two teams’ game at North Branch.

North Branch’s Gabe Wurdemann follows through on a return during his match against Becker.

The North Branch Vikings racked up several impressive wins last week, going a perfect 4-0 and improving their season record to 7-5.

First up was a 10-2 win over Becker where the Vikings scored in all but two innings. Isaiah Scarborough and Reed Jacobsen each had three RBIs in the game. Andrew Orf pitched six innings to earn the win.

Two days later, the Vikings needed to rally to top visiting Cambridge-Isanti. The Jackets jumped out to a 7-1 lead after three innings, but North Branch scored eight in the remaining four innings, including the walk-off run in the bottom of the seventh. Orf and Noah Thorsen each had two RBIs in the game.

The other two wins came during a split double-header up north as NB topped Duluth Denfeld 9-3 and Cloquet 8-5. Both games featured the Vikings taking early leads, with the team holding off a seventh-inning rally by the Lumberjacks in the second game of the twin bill. Orf was the offensive leader against the Hunters with three RBI while also collecting the win on the mound. Cole Olson and Nathan Franklin each had two RBIs in the win against Cloquet.

Unfortunately for the Jackets, their record for the week was the exact opposite at 0-4. Besides the loss to North Branch, C-I lost to Princeton 4-3 and 7-0 in a double-header, plus they fell to St. Francis 13-7.

The Vikings had mixed results last week, ultimately going 1-2. The lone win was a five-inning victory over Cambridge-Isanti by a score of 14-0. The two losses were to Becker by a score of 7-3 and Hermantown in a 1-0 pitchers’ duel.

Likewise, the Jackets also went 1-2 for the week. Besides the lopsided loss to North Branch, C-I won a slugfest against Princeton, with the final score being 18-14. C-I also lost to St. Francis 13-5. Against the Saints, the Jackets held a 5-4 lead after four innings but gave up six runs in the fifth.

The Jackets went 2-0 in an unusually slow week that wasn’t impacted by the weather. The Jackets easily topped visiting Big Lake 7-0. All of the matches were straight-set wins, with the Jackets only yielding a total of three games to the Hornets. The other victory was much closer, as C-I edged Chisago Lakes 4-3. The deciding match came at third singles as Micah Gustafson pulled out a three-set win by scores of 6-4,4-6,6-1.

North Branch had a much busier week and was unfortunately not as successful, dropping all five matches the team played. The week started with a pair of shutout losses, to Chisago Lakes and Becker. Next, the Vikings traveled to Pine City, where they lost to the Dragons 5-2. Finally, they lost to Cloquet 5-2 and St. Francis 4-3 at the St. Francis triangular. Individually, Drake Mellon and Wyatt Helberg earned two wins for the week, as did doubles player Camron Moriarty, with one win being while partnered with Alex Tribbett and the other being partnered with Michael Thao.

The Vikings competed in the Buffalo Invite last week. Sophia Thorsen picked up North Branch’s lone first-place finish, which came in the 400. The girls 4x200 came in second and Derrian Dick (400), Asaysha Olson (high jump), and Ella Dick (pole vault) finished third. For the boys, Austin Anderson was the top finisher, coming in second in the 400. Logan Murphy came in third in both the high jump and 200, as did Carson Weber in the triple jump.

The Jacket boys and girls had a rarer situation of competing at different locations last week. The boys competed at Mounds View, while the girls were at Big Lake.

The only results from C-I that were received was a fourth-place finish in the same conference meet at Pebble Creek.

The Jackets played in two meets last week, coming in fourth out of eight teams at Pebble Creek and seventh out of 11 teams at their rescheduled home meet. Emily Nystrom tied for second place at the Purple Hawk home meet and finished in fourth at Pebble Creek.

The North Branch girls finished in second place at the same conference meet at Pebble Creek, with Hailey Bistodeau winning the meet by shooting an 87.