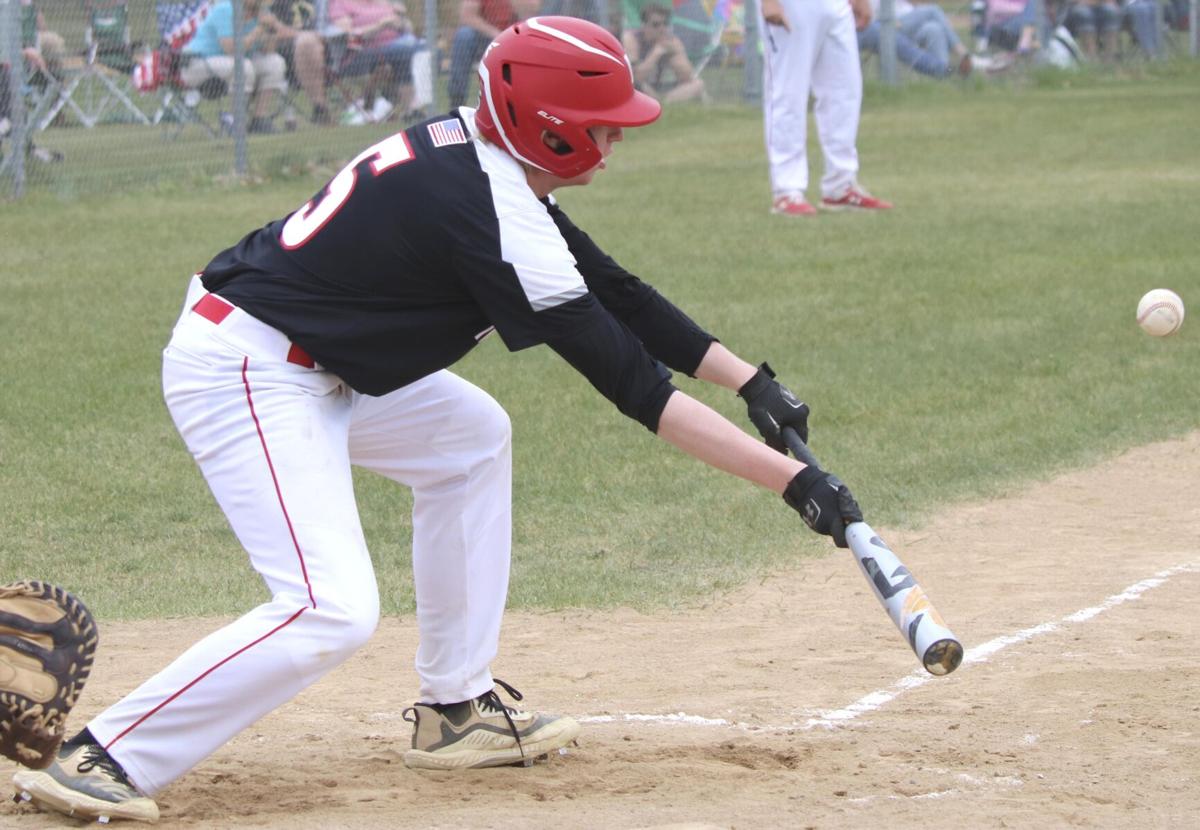 North Branch’s Cole Palmer lays down a bunt during the Vikings’ game against Hermantown. 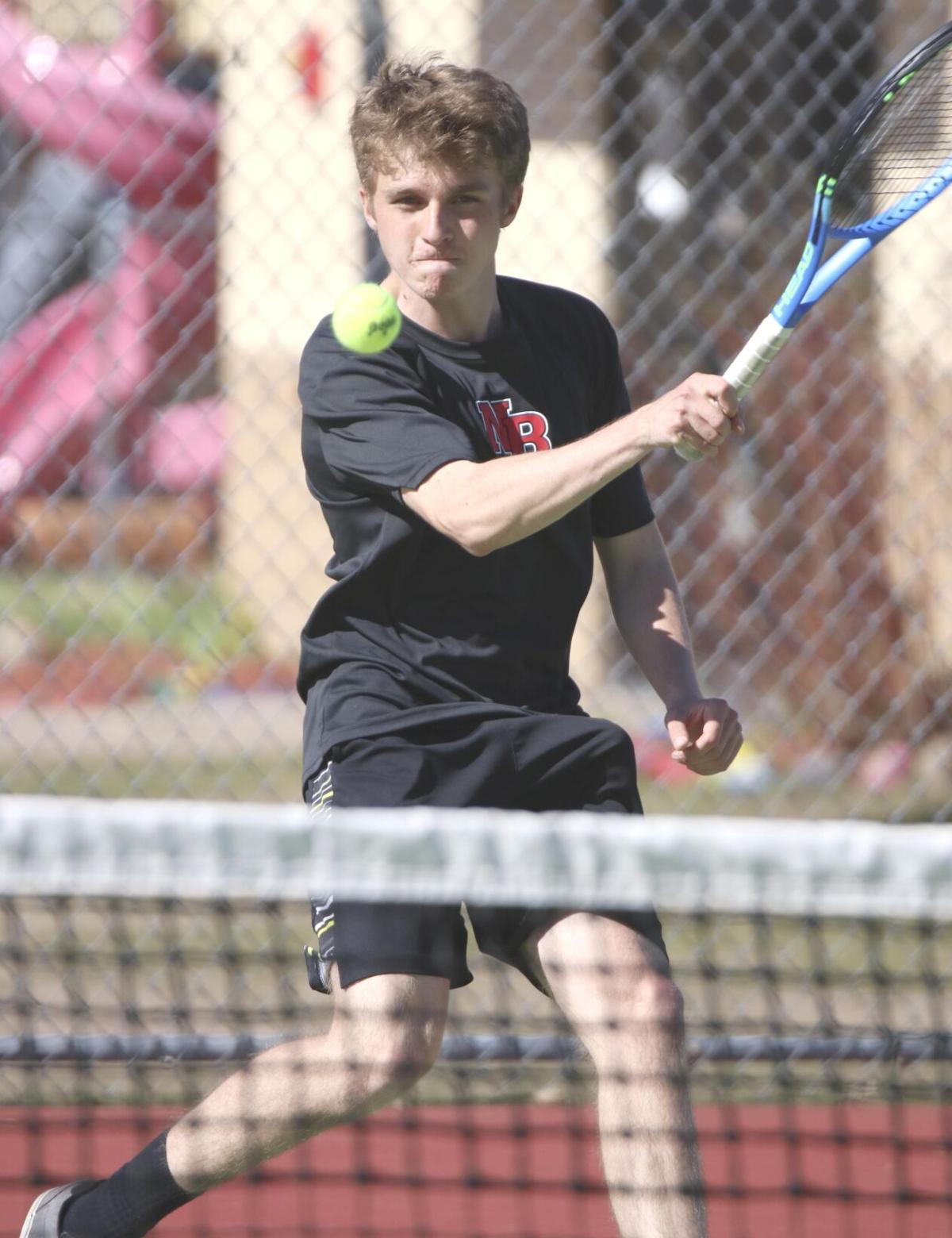 North Branch’s Theo Carjila follows through on a return shot during his match versus Forest Lake.

North Branch’s Cole Palmer lays down a bunt during the Vikings’ game against Hermantown.

North Branch’s Theo Carjila follows through on a return shot during his match versus Forest Lake.

The Vikings came away with two solid wins last week, but also featured a tough loss. North Branch started with a 13-3, five inning win over Monticello. The Vikings scored in each inning except the third, culminating with eight runs in the bottom of the fifth to put an early end to the game via the ten-run rule.

The Vikings also cruised to a 9-2 win over Hermantown to finish off the week. In that game, Devon Schulte pitched a complete game to earn the win. Andrew Orf went 4-4 at the plate, including a home run, and collected three RBI. Gaven Jensen-Schneider also collected three RBI in his 3-3 performance.

The lone loss of the week came at Big Lake when the Hornets earned a walk-off 4-3, eight-inning win.

Despite showing some offensive spark last week, the Jackets finished with a 1-3 record.  The first game of the week saw the Jackets fall to Chisago Lakes 8-6. The story of the game was the Wildcats’ ability to successfully steal 10 bases, putting numerous runners into scoring position. The Jackets did attempt a rally, scoring one run in the sixth and seventh, but it wasn’t enough.

The following day, C-I got thumped by Blaine by a score of 8-1. To end their week, the Jackets played a double-header versus Becker, where they wound up splitting the games by scores of a 7-5 loss and a 12-5 win. In the loss, C-I had a 5-1 lead going into the sixth inning, only to have the bulldogs score four in the sixth and the game-winning two runs in the seventh. In the second game, C-I wouldn’t let the same thing happen, sprinkling their 12 runs, with nearly half coming in the top of the seventh to clinch the win.

The Vikings wound up playing only one game last week as a double-header versus Big Lake got pushed back a week. However, North Branch made the most of their one opportunity, avenging a loss earlier in the season by topping Monticello 8-3 in nine innings. After being deadlocked at three apiece through eight innings, North Branch exploded for five runs in the ninth to earn the win.

C-I had a rough week, taking three lopsided losses on the chin. The Jackets fell to Chisago Lakes 9-3, Becker 13-1, and Coon Rapids 10-0.

The Jackets split their week, beating St. Francis 6-1, but then falling to Anoka 5-2. In the loss to the Tornadoes, Alex Magnuson at second singles and Rigo Mork and Caden Chesla at first doubles picked up C-I’s only wins.

The Vikings young squad continued to battle hard, but couldn’t quite come up with any wins as North Branch  lost to Forest Lake, Foley, Duluth Denfeld, and Chisago Lakes.

Both the Bluejacket boys and girls came up with another conference quad win, this time topping Princeton, Becker, and Big Lake at Princeton.

Meanwhile, North Branch was facing the other half of the conference in a quad featuring the Vikings, St. Francis, Monticello, and Chisago Lakes. Although they didn’t have many first place finishes, the Vikings were thrilled with the results as 27 boys and 23 girls achieved personal records. In the scorebooks, Paige Bauer (high jump, triple jump, pole vault) was a three-event winner for the girls and Harrison Toussaint (110 hurdles, long jump) was a double-winner for the boys. The only other first came from Asaysha Olson in the triple jump.

Both the Jackets and Vikings competed in a conference meet at the Purple Hawk last week. As a team, the Jackets came out on top, with North Branch finishing fifth. Individually, Jasmyn Sibell claimed another meet championship, shooting an 81. Hailey Bistodeau finished in 14th for the Vikings, shooting a 97.

The following Monday, May 17, the girls linksters were back at it, this time at Princeton, where the Jackets finished third and the Vikings finished fourth. Bistodeau had an excellent meet, shooting an 82, which was good for second place. Sibell was two shots behind, carding a third place 84.