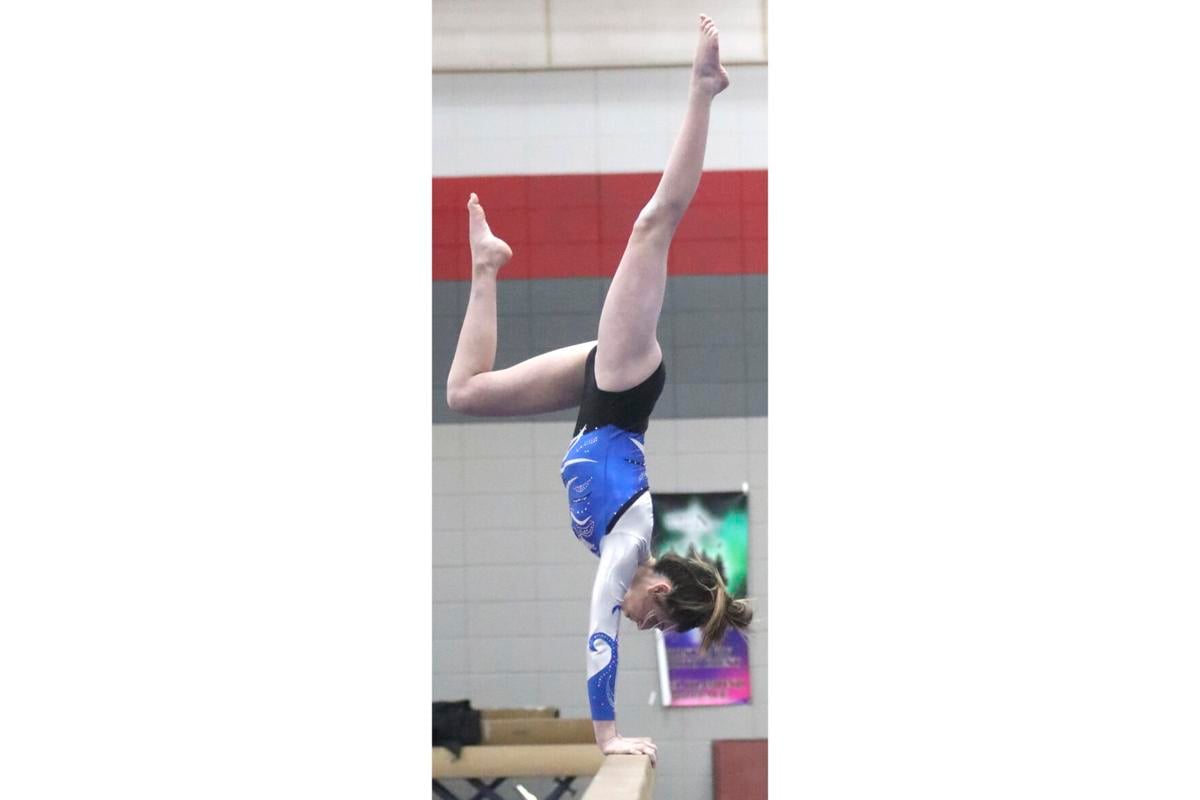 Cambridge-Isanti’s Zoe Klocksien hits a press to stag handstand while mounting onto the beam during the Jackets’ meet at North Branch. The Jackets’ January is chock-full with meets due to an earlier-than-normal state meet. 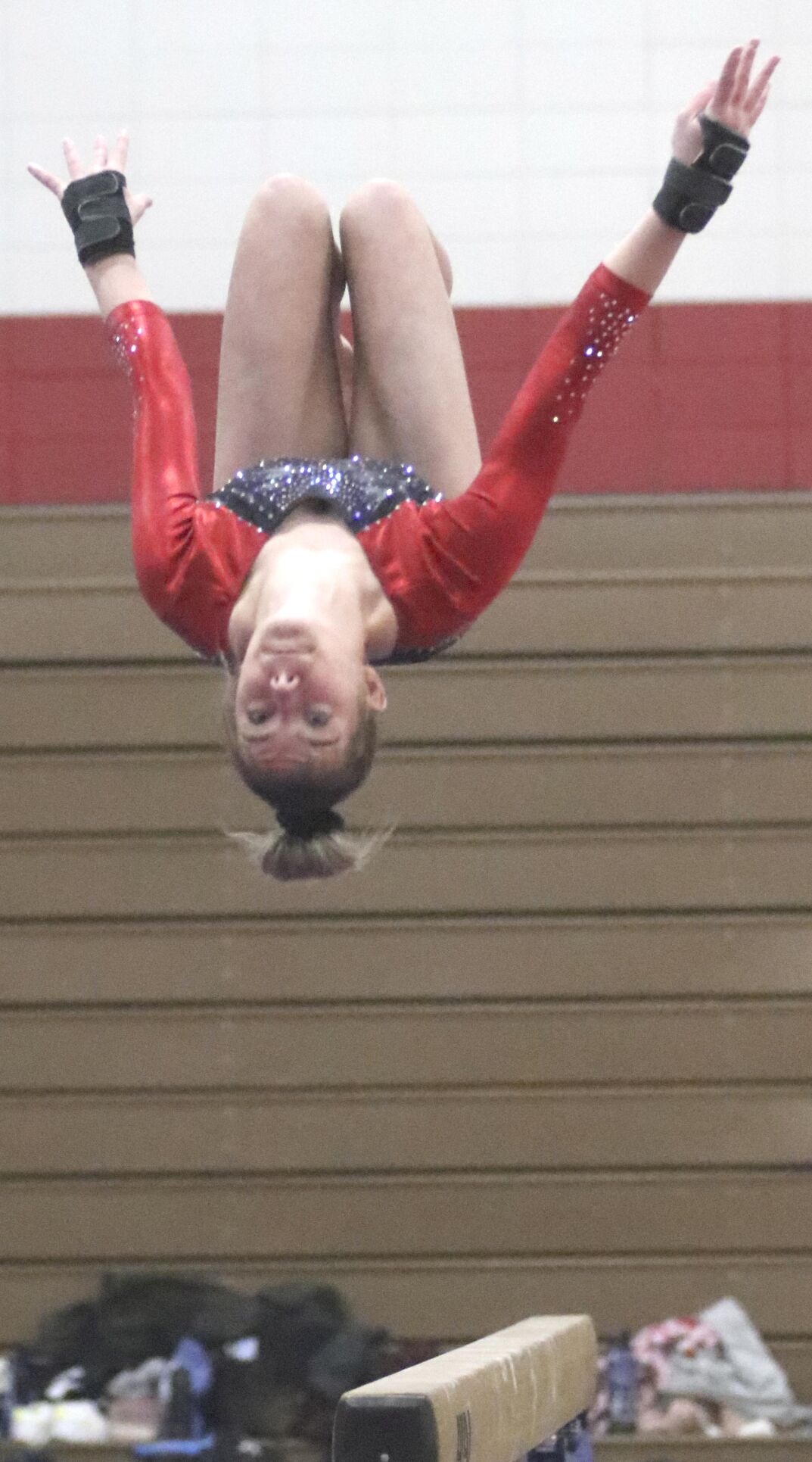 North Branch’s Libby Nielsen executes a tuck dismount from the beam during the Vikings’ meet against Cambridge-Isanti. The sophomore would take first on the event. 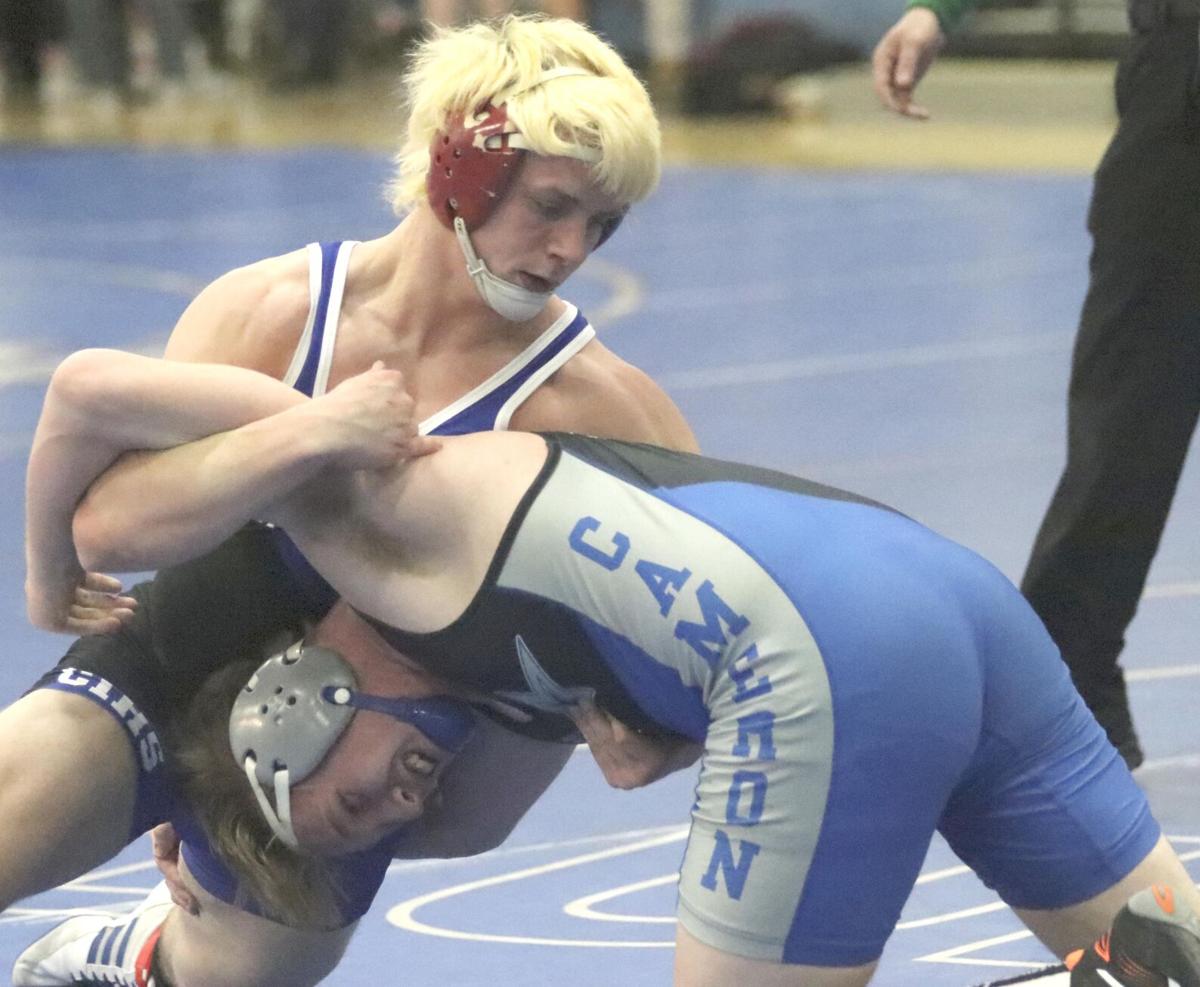 C-I’s Darren Spencer gets his Cameron opponent in an underhook during his opening-round match of the Bluejacket Invite. 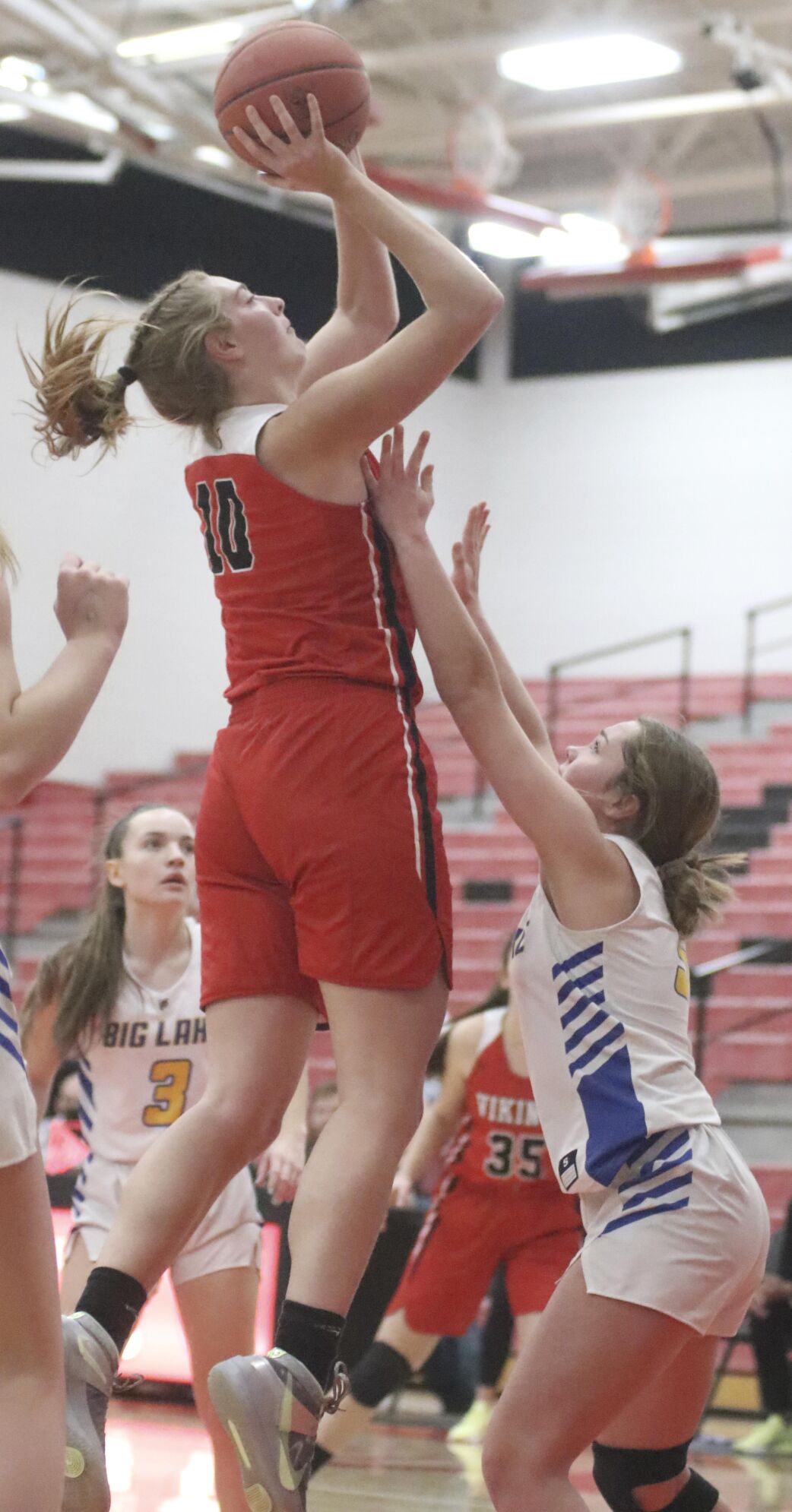 North Branch’s Paige Peaslee goes up for a shot in heavy traffic during the Vikings’ game versus Big Lake. 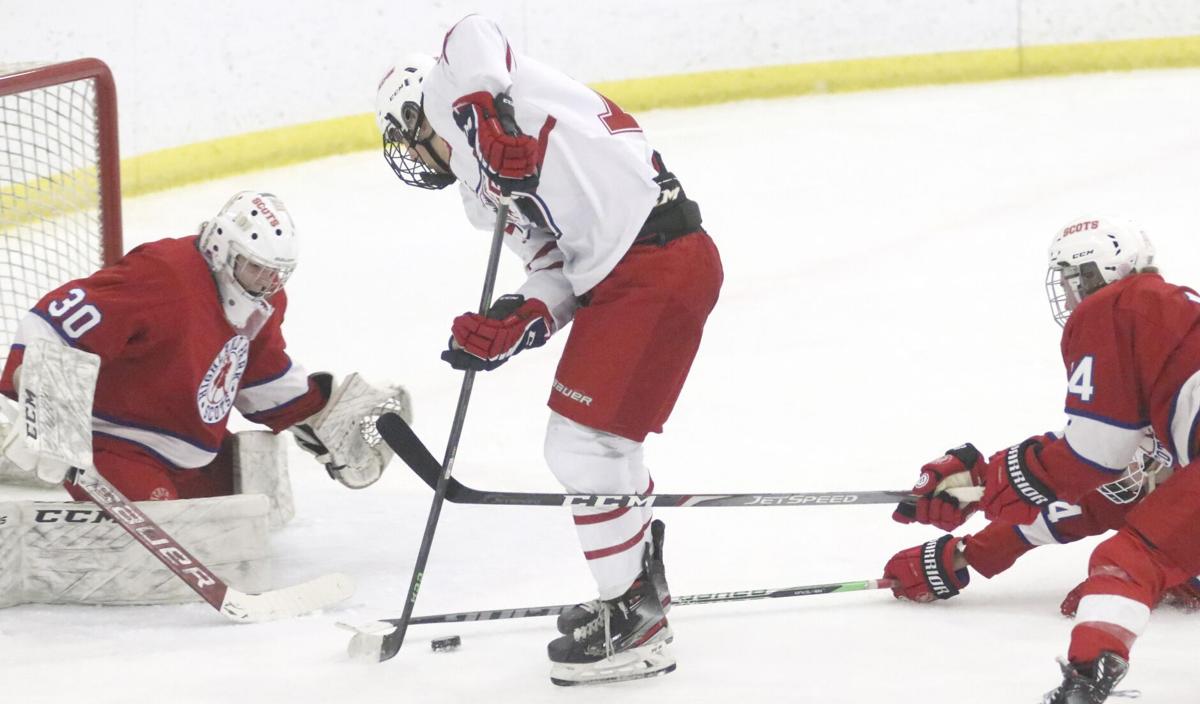 Cambridge-Isanti’s Zoe Klocksien hits a press to stag handstand while mounting onto the beam during the Jackets’ meet at North Branch. The Jackets’ January is chock-full with meets due to an earlier-than-normal state meet.

North Branch’s Libby Nielsen executes a tuck dismount from the beam during the Vikings’ meet against Cambridge-Isanti. The sophomore would take first on the event.

C-I’s Darren Spencer gets his Cameron opponent in an underhook during his opening-round match of the Bluejacket Invite.

North Branch’s Paige Peaslee goes up for a shot in heavy traffic during the Vikings’ game versus Big Lake.

With the Minnesota State Gymnastics Meet being held one week earlier than normal due to a scheduling conflict with Roy Wilkins Auditorium, high school teams have found their competition schedule wrapped tighter than a gymnasts’ ankles.

For Cambridge-Isanti, January features a total of eight meets in 25 days, including concluding the season with three meets in a mere five days. North Branch’s schedule is slightly lighter, having seven meets in that same stretch.

The Bluejackets’ hectic schedule was jump-started last week with a dual meet at neighbor North Branch, followed by a 16-team invite two days later. In those two meets, the Jackets found themselves scoring nearly identical team totals, although they reached those totals in different ways.

Against North Branch, multiple girls saw varsity action for the first time, along with debuting new skills or completely new routines. Although they had a strong meet, the scores didn’t quite follow suit as C-I finished with a 137.375, topping the Vikings’ 127.45. Individually, Laci Leverty took first on the vault (9.3) and floor (9.475), along with second on bars (9.15) and beam (8.95), for a first-place all-around score of 36.875. North Branch’s Dakota Esget took first on the bars with a 9.3 and Libby Nielson took first on the beam with a 9.05.

At the Faribault Invite, C-I’s 137.7 placed the team in fourth, behind Wayzata, Owatonna and Anoka. The Jackets were actually in second place before their third rotation (beam), where the team suffered multiple falls and other deductions that knocked them down two spots. Individually, Leverty took home first place on the vault with a 9.35 and bars with a 9.45. She also came in fourth in the all-around with a 36.15. Abby Kryzer’s 35.2 all-around score was good enough for sixth place.

The North Branch Vikings continued their stellar season with two more wins last week, bringing their season record to 10-1, which places them in the #1 slot for the Section 7AAA standings and a QRF rank of #7. Last week’s wins came via a 66-55 defeat of Big Lake and a 65-52 victory over section foe Grand Rapids. In the game against the Hornets, Adam Rehm had 23 points and Trevor Johnson added 18 to lead the Vikings.

The Bluejackets’ season-long slide is finally over. In its only game of the week, C-I edged past St. Francis, 68-67, for the team’s first win of the season. The Jackets took a 38-34 lead into halftime and hung on for the one-point win. Kobe Karels scored 22 points, followed closely by Braden Jones’ 20 points.

C-I increased its winning streak to nine in a row last week, picking up a 5-2 win over Sauk Rapids/Rice and a 3-2 overtime thriller over Chisago Lakes. The Jackets broke the 2-2 deadlock by scoring three unanswered goals in the third period to get the win over the Storm. Finn Overby scored twice in the third period, including the eventual game-winner. Against the Wildcats, Will O’Donovan’s second goal of the game at 3:32 of overtime capped off the evenly played game. Jaxon Sibell earned the win between the pipes in both games.

The Vikings overcame a sluggish start in the team’s only game of the week, rallying to beat Big Lake 45-41. After going down 24-16 at halftime, North Branch regrouped and outscored the Hornets 29-17 in the second half. Ella Kuhlman scored 25 points, including six three-pointers. Paige Peaslee added 17 points in the win.

The Jackets’ two games — versus St. Francis and at Brainerd —were both postponed last week.

The Vikings also competed in a conference match, plus an invite last week. North Branch lost to Chisago Lakes 57-24 and then came in eighth as a team at the Ogilvie Invite. Ashton LaBelle took first at 170 pounds at Ogilvie, with Brandt Bombard taking second at 160 pounds and Michael Thao taking third at 138 pounds.

Northern Tier suffered a pair of lopsided losses last week, falling to Champlin Park/Coon Rapids 7-1 and getting shut out by Grand Rapids/Greenway 6-0. Jenna Hari scored the lone goal for the Stars.

C-I also competed in the Spring Lake Park Invite, coming in sixth as a team. Williams was the top finisher for C-I, coming in third in the 50 free.